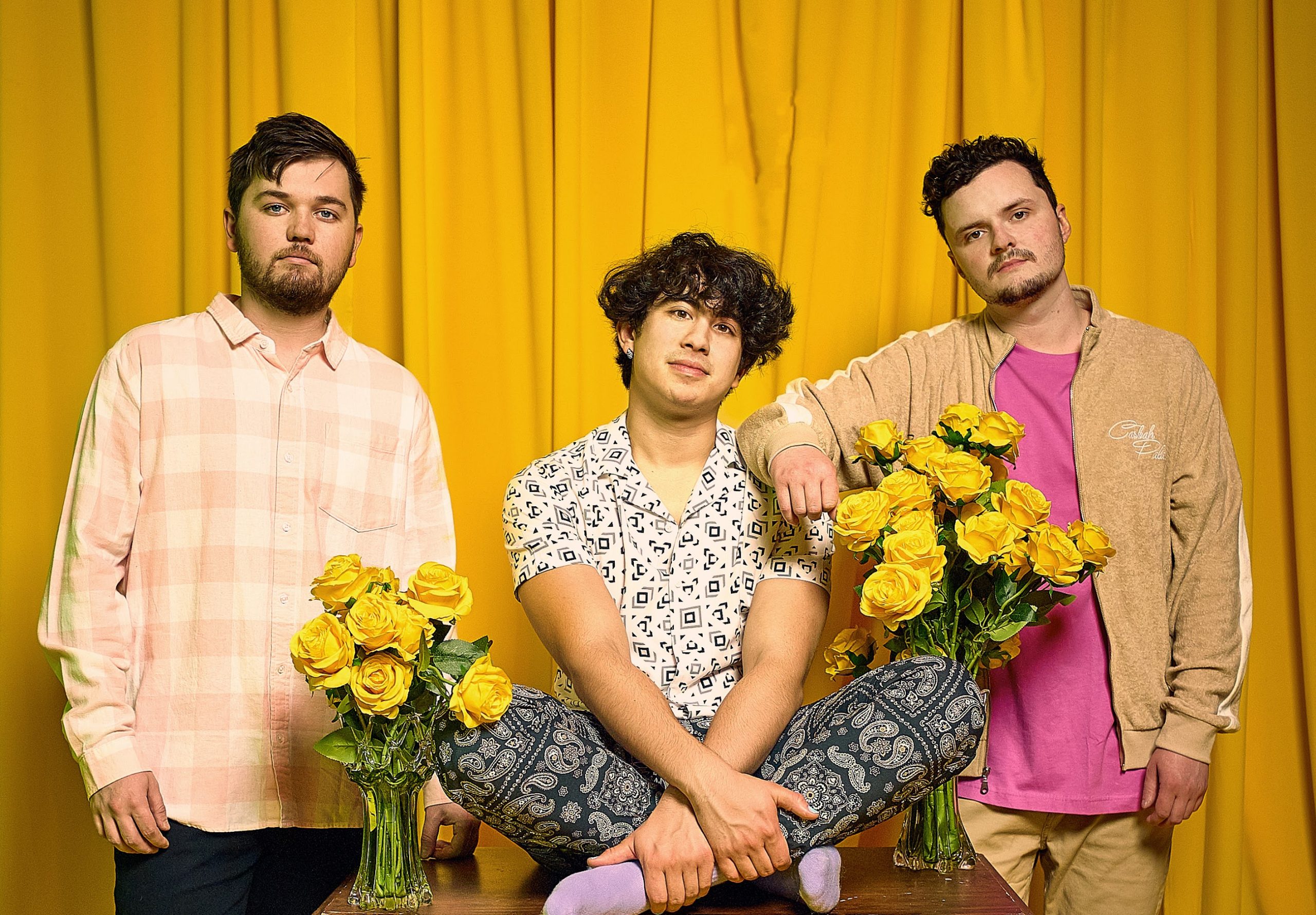 With nearly 74 million streams and major headline shows at venues like Webster Hall in NYC, House Of Blues in San Diego, and Union Stage in DC under their belt in 2022 alone, The Happy Fits are past the point of needing an introduction. However, despite a record year, the trio, made up of Calvin Langman, Ross Monteith, and Luke Davis, are looking to expand their reach even further in 2023.

Emulating a style similar to bands like Wallows and Dayglow, The Happy Fits offer up their own brand of indie pop, differentiating themselves with Langman front and center with the electric cello and his classical training coming into play. The music, particularly on the new album Under The Shade Of Green, on the surface, appears quirky, upbeat, and lively. But behind the humor and the playfulness, in both the music and its accompanying visuals, the record dives into sensitive topics, difficult thoughts, and tough conversations brought on during the height of the pandemic.

Disclaimer: Davis was not available at the time of this interview. All quotes are from Langman and Monteith.

The group’s origins began with Langman and Monteith playing covers together, such as songs by Andrew Bird, the Milk Carton Kids, and George Ezra, before diving into original material. “2CELLOS was a huge influence for Calvin,” said Monteith. “They take cello and do renditions of popular songs, almost in a classical way. When we first started talking, he put me onto them and said, ‘This is what I’m trying to do.’ We started trying to do a similar thing with covers of our favorite bands. We didn’t really enjoy doing it, or think we were really good at it, so then, one day, we were playing a local show and Calvin played an original song. Then I was like, ‘Oh, I have some original stuff that I want to show you,’ and that’s how we sort of changed course into writing our own music.”

The duo wanted to record a four-song EP the summer before going off to college. “We were like, ‘Alright, two will be acoustic-y, but let’s have two rock songs on it, for fun,” said Langman. “It was for our friends… there didn’t have to be any sort of genre-cohesion.” They enlisted the help of drummer Luke Davis, a friend of Monteith’s brother, and hit the ground running. “Spotify just did its thing,” said Langman. “We got on ‘Fresh Finds’, and thought, ‘Maybe this is our shot’”. They then dropped out of school and started working on music full-time.

The music scene in their local area in New Jersey was scarce, so the boys would travel to the Rutgers University area, as well as Asbury Park, to start playing out and make a name for themselves. “I think Asbury Park is the only place with an established music scene in New Jersey,” said Monteith. “After that, we did a lot of Philly shows and New York shows. We did residencies in both playing for a month straight. Our first show with Luke involved was at Penn State University, about four hours from us. We knew that we had to travel to start playing live music, which I think helped our ambition for touring since there wasn’t any local option to stay around where we were and play music and get known that way.”

They released their debut EP, Awfully Apeelin’, in 2016. The project, highlighted by the Beatles-esque track, “Right Through,” is a bit tepid and underwhelming, but still manages to plant seeds of what was to come. 2018 album Concentrate is much more refined, with tracks like “Hungry People” and “So Alright, Cool, Whatever” setting the tone with a more abrasive sound, and “Grow Back” and “Mary” completely caving the roof in. Influences of Elvis, classic rock, and rockabilly country can be heard sprinkled throughout.

Now, with the release of Under The Shade Of Green, their most commercially-viable and thematically-cohesive project to date, they are fully entrenched in the indie pop landscape. The songs come from a darker, more introspective place lyrically, but contain their catchiest hooks and melodies to date. “In The Lobby,” with its call-and-response vocals and campy yet endearing lyrical delivery, is an immediate attention-grabber, as is the uplifting “Little One.” The band have released puppet-themed music videos for both, cleverly contrasting the darker, more serious lyrical imagery with faux comedic visuals, yet still allowing the song’s brooding undertones to be the focal point. “We’ll always build a song around an effervescent vibe,” said Langman. “Then we’ll try to ask ourselves what the music itself is asking us to say before we write any of the lyrics. It has definitely been hard in the last two years to avoid the crazy wildfires that have been happening, or the rising inequality, or climate change, so it’s nice to be able to process some of those emotions in the music.” Langman stated that this ability to interpret messages from the music, essentially a spiritual relationship with it, comes from his classical background. “There are no words in that kind of music, but when you’re practicing with your colleagues or other classmates, you have to apply emotions to what the music sounds like to you. You do it for every line in the piece… you make up a story or a scenery that matches. So, that is always how I approach music.”

Despite using this new record as a vehicle to process their pain and confusion with the current state of the world, they want their fans to find solace in their music. “I think to most listeners, they don’t really hear the lyrics, they just hear the vibe of what the song sounds like, and I think that’s most important. After a hard day of work or school, you can just come home and listen to that song that will make you feel really happy. Then for the listeners that want to dive deeper into the meaning, they have the lyrics to dive into as well.”

“2022 was a very content-forward year,” said Langman. “We had tour in December of last year, then January and half of February to start planning out music videos. Then we went on another 12-week tour, got back from that, and had to make, like, five more videos before we went back on tour in Europe in October. It’s nice to be able to end the year on tour and kind of see all the fruits of your labor.” They closed out the year at NYC’s Webster Hall, a show that, as a group with history in the city, and who fought and clawed to make it work while living there during the albums recording process, was a fitting full-circle moment. “Webster is going to be our biggest show yet,” said Langman, just days before the big show. “I think the capacity there is 1350 and it sold out. We started out playing venues like the Mercury Lounge for 10-12 people. Mostly Luke and Ross’ family. So to go from there to Webster is pretty insane.”

The band plans on another rigorous touring year in 2023, including a spot on the inaugural Adjacent Festival in Atlantic City, headlined by Blink-182 and Paramore. They also seemed to have other big projects in mind, but were unable to share those details. For a group so in touch with their musical and emotional instincts, there are, seemingly, no limits to their creative endeavors going forward.