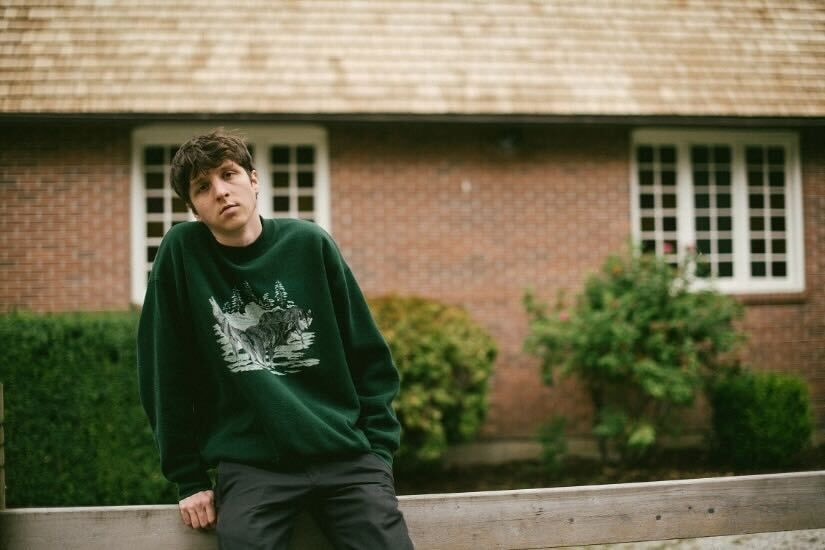 Lofi-inspired singer and rapper Powfu is the epitome of chill. His face appears in the Zoom meeting room and he offers a nonchalant greeting. A giant stuffed teddy bear can be seen peeking through one corner of the room. The backdrop is an over-the-door coat rack holding ball caps and hoodies. Despite being a Billboard Hot 100 artist and viral social media presence, Powfu is laid back and easy-going, casually speaking about his music as if to an old friend he’s known for years.

He describes his new music, “I feel like every song I release slowly improves and gets better. I still try to keep the lofi. I still record in my bedroom. It still has similar vibes, it just gets better.” Following the success of his 2020 breakout hit, “death bed (coffee for your head),” the artist is highlighting a similar sound on his new EP, surrounded by hounds and serpents.

The project opens with melodic “shade of blue” featuring Rxseboy, Tia Tia, and Shalfi. The track’s chorus weaves through bass and synths. Powfu serves reflective bars rapping, “Then we took a turn for the worst, yellin’ out our conversations, once in a month became everyday shit.” The accompanying music video has a galaxy aesthetic with multiple screens displaying the artists before following them through a trippy alternate universe.

“Washing off the blood” begins with a soothing piano harmony before Powfu vocalizes. His combination of melodies and verses is reminiscent of Post Malone. He perfectly catches the beat and throws back an effortless rhyme. The beat slows for a satisfying transition into the next track, “keepsafe.” Laeland and Powfu join forces for a melancholy rap that incites a feeling of defeat and frustration, yet a necessary acknowledgment of human emotion.

The vibe picks up through the upbeat snaps and bass of “broke my habits.” Powfu instantly chimes in with an angsty, “Run the track like an athlete, don’t let anyone pass me.” His style and delivery are similar to Juice Wrld, combining the sound of SoundCloud hip-hop with the dismal inflection of emo rap. “Watch me miss” gives the same energy but with a slightly more alt-pop ballad for the hook.

The next track is the artist’s personal favorite on the project. “There’s one track on the EP called ‘butterfly rumors’ which is probably like my personal favorite. I like the melodies a lot and I like the beat a lot,” he says as he gazes off to think, “It sounds the nicest to me I would say.” “Butterfly rumors” has a culmination of chimes, synths, and short harmonies. Powfu takes a vocalized rap approach to each verse. The track is euphoric and embeds itself in the eardrums, providing a calming ease effect.

One of the most surprising aspects of the entire project is the inclusion of a cover. Released before the EP drop, “Mine” is the artist’s alternative rendition of Taylor Swift’s 2010 classic. He shares his creative inspirations, “Well I was jammin’ to Taylor Swift in my car with my wife. Growing up I always listened to her country albums a lot. ‘Mine’ came on and I was like wow this kind of sounds like punk melodies. I could hear the drums over it. I might as well try it.” Amassing tens of thousands of views and hundreds of positive comments, the reimagined cover has been well-received by fans.

To close out the EP, Powfu slows back down with smooth acoustic symphonies. Tapping Rxseboy yet again along with SadBoyProlific and Alek Olsen on “i hate waking up,” the artists fold fast-paced raps into the slower guitar riffs. “Desiree” keeps the same style but touts more romantic lyricism. Featuring Lil Skele, the love song has a delicate undertone with strong assonance.

There is no denying Powfu creates music purely for enjoyment and stepping outside the boundaries of conventional top 40 hits. With a sly smile and chuckle, he replies, “I just hope people like it. There’s not really much more I could wish for. I just make music that I enjoy making and listening to so I just hope other people feel the same.” The cultivation of a loyal fanbase and millions of streams is an added bonus for Powfu. He’s coloring the grey area between segmented genres while also making waves in the industry by staying true to his artistry. Surrounded by hounds and serpents is the soundtrack for today’s new-wave era of music.