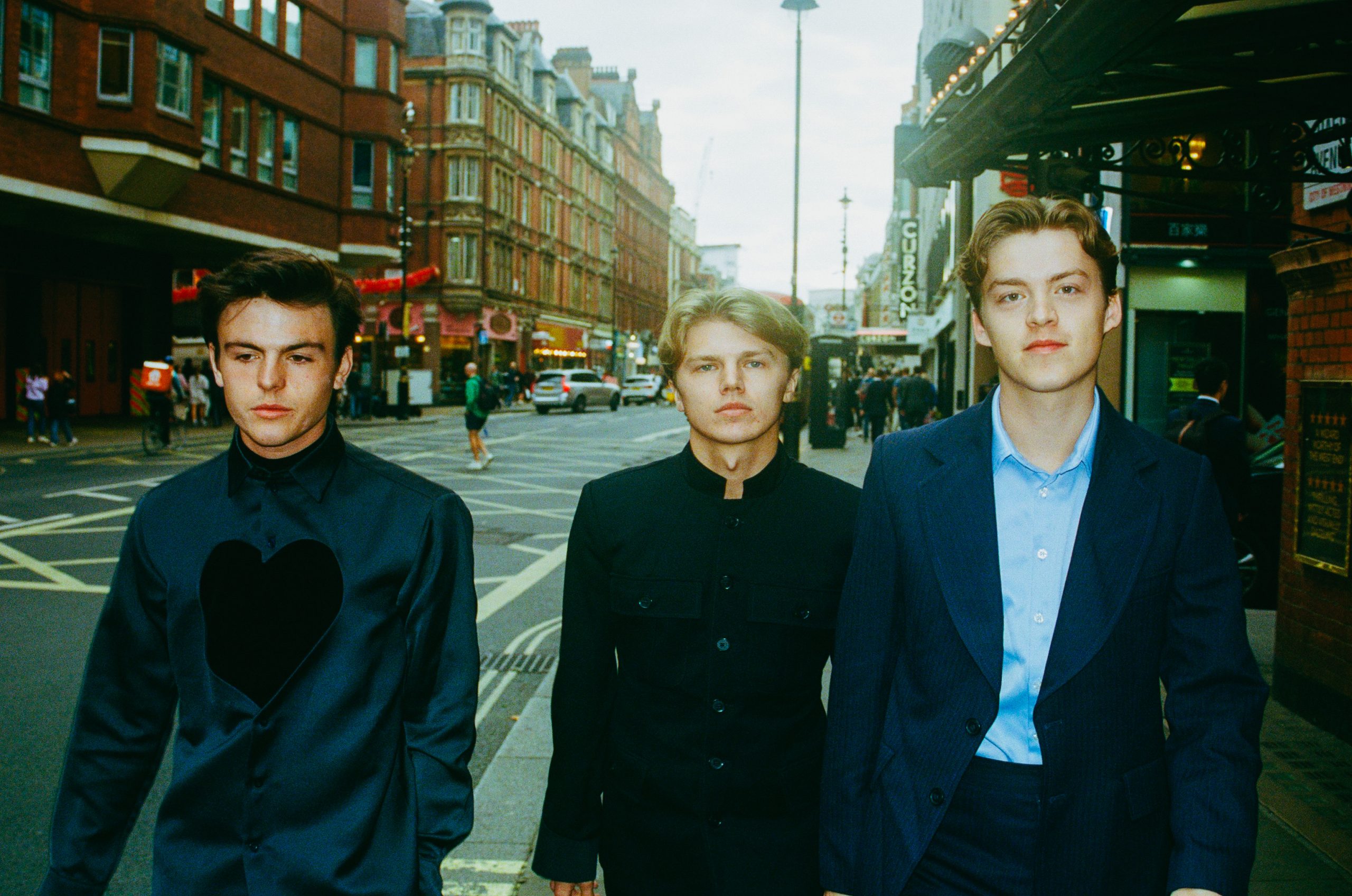 The band explains the road that led them to a 'timeless' sonic vision and their first U.S. tour in three years.

Finding support in a dedicated, passionate fanbase is no easy feat as a budding band, particularly in the age of fast-moving streaming and moments of virality, but New Hope Club grew theirs with youthful intention beginning at the conception of their 2017 EP, Welcome to the Club. And while the vigor of their fans remained largely the same over the last five years, practically everything else changed. The New Hope Club of 2017 is, in many ways, far removed from the New Hope Club of 2022; the members — Reese Bibby, Blake Richardson, and George Smith— continue to be the foundation and the blueprint, but the sonic output of the group has seen drastic evolution more closely inspired by the sounds that fuel them as creatives.

“In our older music, you couldn’t really hear our inspirations that much,” Smith explains to EUPHORIA. “We’d say all the time that we’re the biggest Beatles fans and everything, and then there would be like an EDM song or something that would come out and it would be like, ‘Well, it doesn’t really make sense.’ But now, I feel like we’ve kind of started taking a step back and figured out an experiment of what we wanted to do to try different things.”

As such, 2022 marked a moment of reinvention and reintroduction to the group with six new tracks and their first U.S. tour since 2019. New Hope Club’s embark across the country was met with a warm welcome, with Smith explaining that somehow the sense of camaraderie among their fans was strong enough to sing back lyrics for tracks that hadn’t been released yet. What could have been a daunting and risky change of pace became something that created togetherness in a pairing of new and old faces to listen to a similar duality in the group’s music. It is a comfortable ease into a desire for change that came to fruition during the pandemic — a time before it could feasibly become reality.

Perhaps it was age or imaginative growth, but regardless of the cause, the unintended time to breathe gave Bibby, Richardson and Smith an opportunity to reflect on the little say the members felt they had in determining who they were in their younger days as a group (and find a path forward that allowed them to take more of their own liberties).

“We were really proud of the live show and the journey we’ve been on — so grateful to all the fans and support — but we definitely didn’t feel like we were us in terms of the music we were releasing and the message we wanted to put out to the world,” Bibby says. “Writing this, it took a lot of experimenting. We wrote some weird songs, but then ‘Getting Better’ came at the end of it because we were in such an amazing place where we felt like we’d written this single… It’s all about, ‘How does it make us feel?’”

With a newfound autonomy under their belts to release what moves and excites them most post-pandemic, New Hope Club debuted an eclectic vision that draws upon a more “retro” feel than their more straight-forward pop tracks of the past. The latest singles, “L.U.S.H.” and “Walk It Out,” feature complementary sounds that feel as if they were designed to be sing-shouted in the car and groove to without abandon, respectively.

“L.U.S.H.” — a clever acronym for “love you so hard” — is an upbeat tune about being overwhelmed by adoration in a way that leaves your person endlessly running through your mind. The writing is practically a doting inner monologue with a chorus (“Lu-lu-lu-lush, I love you so hard/ Yeah, your love, it tears me apart/ And the things you did last night/ I can’t get ’em out my mind”) that touches on the adoringly chaotic feeling of falling for someone.

Meanwhile, “Walk It Out” is a more jiving, uncomplicated song about hitting the town, a written intention evident in their pre-chorus: “I’ll take you out, let’s get dressed to the nines/ We’ll clean up good like a couple of dimes/ People will look and they’ll say, who’s this guy/ And how’d I get you by my side (who is this guy).” The band is feeling themselves; it’s a track emblematic of the positivity they sought while writing the forthcoming album, and one that bodes well in a live atmosphere.

That live playability is a key factor in New Hope Club’s process; they record like they play, incorporating a bit of fun and organized chaos into the space they create in. Outside of the obvious aloofness that the practice brings to the workspace, it also helped to solidify the group’s vision for themselves as live performers. The trio wants listeners to know that they aren’t just singers — they are musicians.

“A lot of our favorite things about what we do is the live aspects of our shows… we have that little more rockier side just because we’ve grown up watching bands, like George said, like The Beatles and Fleetwood Mac and all these bands that we’re obsessed with,” Richardson says. “We’ve kind of taken aspects of our live show into the studio, and the way we write and record now is we’ll get a live room, plug in our instruments, each one of us will run in and out of the live booth like kids and get on the drums or get on the guitar. Our minds are racing, and we just want to get it all down. I think you kind of hear that when you hear the track list, it’s very live. You can hear certain little imperfections, and that’s how we intended it.”

For tracks like “Girl Who Does Both,” though, imperfection could nearly make or break whether it sees the light of day. Smith explains that, while two years ago the band might have brushed past a song that didn’t land on the first pass, “Now it’s like, ‘Go back in, there is something in this. Let’s give it another go.’”

As for lyricism, the objective is a bit more linear than the spontaneity of performance. Bibby, Richardson and Smith wanted to tell stories that didn’t fall into a heartbreak trap, but still felt authentic to their real lives. It’s a bit of cautious openness, enough to let listeners take a sonic glimpse into their experiences without the weight of their impact. And the method works; the band collaborated closely with writers like Ross Golan (Ariana Grande, Selena Gomez) and John Ryan (One Direction, Maroon 5) to breathe life into tracks that would shape their project to feel largely positive and warm from the very first listen. “The main thing is New Hope Club; we have hope in our name, we want to provide that. There’s not many bands or artists that are focusing on trying to make everyone feel good for them,” Bibby explains.

The cheerfulness is approachable and familiar, much like the energy the group strives to bring to the stage while touring. It took years for Bibby, Richardson and Smith to become comfortably acquainted with the idea of speaking more genuinely to their deep-rooted feelings as individuals, and the forthcoming album gave them a plentiful outlet to make the move into uncharted (yet upbeat) emotional territory. With candor in mind, the desire to feel joy is the clear throughline for New Hope Club’s projects, and the guys want their listeners to consume the music as though they took part in creating that feeling themselves.

“The album feels like you’re in the room with us when we wrote it,” Smith says. “That’s how we wanted it to feel. So, I want them to kind of take that away from the album. A lot of the songs, they’re happy and positive because we want people to see that sort of light at the end of the tunnel sort of thing when they listen to our music.”

Ultimately, the refined and synergetic process in the studio also allowed them to carve out a niche in the pop genre; nostalgia blended with new age pop is the name of the game for the revamped New Hope Club, and they don’t want to stop at the sound. This reinvention is part of a greater declaration to make a lasting impact, and the optics are just as important to them as the sonic output in seeing that through. “We just want it to feel timeless,” Richardson explains. “We want everything — what we wear, what we say, the music — we want it to feel like it can live on another 100 years, or like it could have been listened to 100 years ago. We just want it to feel like it will live on forever. That’s our dream. Not saying it will, but in our minds, that’s what we want to put out.”

This album, then, becomes a snapshot of who New Hope Club is now; a memento of their second coming, of sorts. And when considering the jump in tone from the group’s 2020 self-titled project, it is evident that this freeze frame won’t be the last with a long-term foresight at play. Notably, though, the members’ priorities have shifted alongside their evolving artistry. The three have each found love, Richardson landed his first movie role — playing none other than the Beatle himself, Paul McCartney — and they have declared more creative freedom in the industry before 25 than plenty of artists do in their lifetime. “I’d like to say we’re men now,” Richardson laughs. “We’re a man band.”

The music only changes because they do, and this era of new beginnings for the band is a reflection of their willingness to accept the tide as it comes while planting their roots firmly in the vision they are prepared to execute.

“Looking back on this album in 20 years time when you’re with your family and kids, you can be like, ‘That’s the start of when we became who we are,’” Smith says. “You can be really proud about that moment and that achievement of releasing that album.”