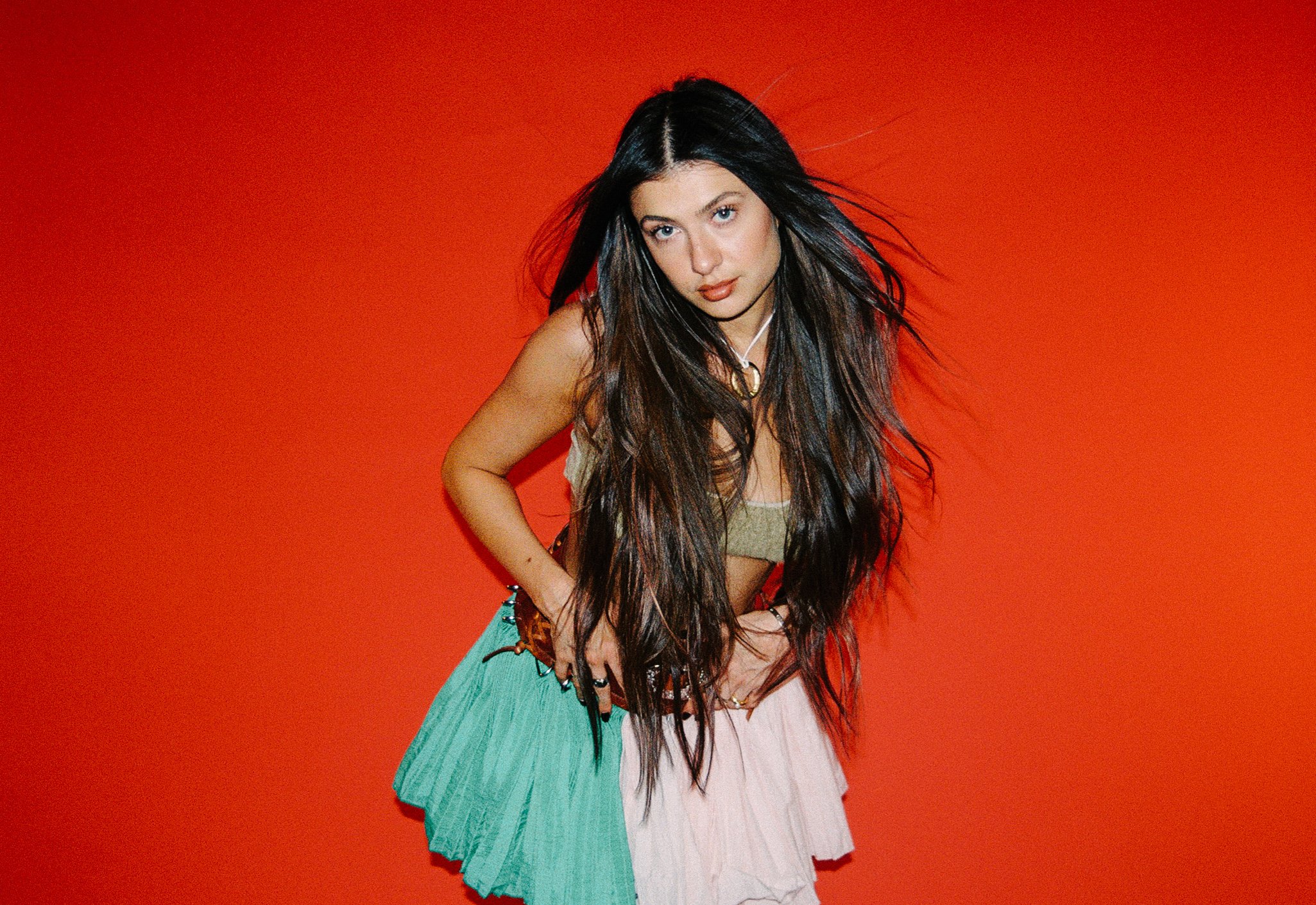 2022 has been the most defining year yet for singer-songwriter Leah Kate. And now with the release of her new EP, Alive And Unwell, it has just got even better.

EUPHORIA. first spoke to Kate in early 2021 when she found viral success with the playful “Fuck Up The Friendship.” For many, the song will have been their introduction to the California-born rising star. However, her fanbase, known as the Leah Nation, rapidly increased at the top of this year when she served as the opening act for Madison Beer on the European leg of her “Life Support” tour. Around the same time, Kate’s latest single, the angsty “10 Things I Hate About You,” was dominating both TikTok and the airwaves, becoming her first charting hit around the world. In the summer, the whirlwind continued when Kate went on the road with Chase Atlantic across North America.

It’s Kate’s ability to tap into different waves of pop music that has continued to impress and gain her attention. Her second EP, Alive and Unwell, is the new addition to her fastly growing back catalog, containing 8 songs that she says will showcase “a culmination of tough times turned into art.” One of her most recent offerings, “Hot All The Time,” is undoubtably Kate as her best.

After two support slots, the time has come for Kate to embark on her first-ever headlining tour. For the next month, she will perform 17 shows across Europe. While in London, two days before opening night, EUPHORIA.‘s Fabio Magnocavallo caught up with Kate at her PR office to discuss all the exciting things she currently has going on.

It’s been such a busy year for you, and here you are, releasing another EP. How are you feeling putting out another project?
I’m so excited. I feel like this is the first time I’m putting out a project with the Leah Nation onboard and so many more people who are now a part of my journey. After “10 Things” and this crazy year, I feel like more people are gonna listen, which is exciting. I’ve been working on these songs for a year, so I’m thrilled. I can’t wait.

It contains eight songs, all of which you have stated are some of your favorites that you’ve ever written. Does that mean it was easy to pick the tracklisting or did a few get cut off?
Oh, it was so hard. Throughout the Chase Atlantic tour every day I would just re-sequence new songs and I just couldn’t fucking decide. And at first, the label was like, it has to be six songs but I knew it wasn’t going to be six songs, telling them it’s gonna be eight. And so, it was the hardest decision ever.

Were there any new influences that inspired the project?
It was mostly influenced by the music I grew up listening to. I really wanted to lean into more rock vibes. I was doing a lot of more pop stuff before and I just always loved guitar elements and rock elements in my music. So I was like, I’m just gonna do a rock EP. A lot of the songs are very rock-leaning, they’re very funky rock songs.

You decided to not include “Twinkle Twinkle” on there. Did the mixed reaction dictate that decision?
I don’t really care about internet hate or any of that. I get tons of it. It doesn’t bother me.  I could have taken the song down or stopped playing it. I felt in reflection, I just don’t really like that song anymore. It’s really actually fun live, but it doesn’t reflect where I’m at musically today. It was kind of like a joke when I put it out. I don’t know, it was like honestly about me wanting this guy to grow the fuck up, so I wrote him a nursery rhyme and maybe he’ll grow up and whatever. I will actually always play it live ‘cuz it’s so fun. And if I was clearly impacted by the hate, I wouldn’t play it live. It’s just not where I’m at musically, it didn’t belong on this project. My songs feel more mature.

How do you deal with negative comments?
That’s something I had to like wrap my head around, especially during the Chase tour when I was getting trolled. I’d go to my meet and greets and ask fans, ‘How’d you find my music?’ and they’d tell me, ‘There’s a video of someone talking shit about you.’ And I was like, okay, so maybe there’s something to this. I had like a massive hit this year and a lot of people figured out who I was and what that came with a lot of opinions. Some good, some terrible and I’m just like, cool. At least you have an opinion of me instead of no opinion. I guess it’s better than none at all. It doesn’t really bother me, it really doesn’t. I think I have thick skin.

“Hot All The Time” we both agree is one of your best songs. What inspired the song and how early on in the creative process did you know that it was special?
Yes. The second I listened to it, I was like, this is a smash! What inspired it is that feeling of wanting to like be killing it in life and feeling hot and confident in your skin to make someone be like, oh shit, I fucked up, and I’m missing out. And that’s how I always feel when I’m sad over someone or missing someone between wanting to put out a really good song that they know is about them or posting a really hot picture. Just feeling my best self, that’s a feeling that I’ve been wanting to capture for so long, that emotion of wanting to feel fucking hot to move on and feel great in your own skin. It’s my favorite song I’ve ever done.

“Never Been Better” is also a fave of mine. Tell me about how that one came about.
That’s about realizing, oh my god, I’m so much better off without this person in your life. Sometimes it’s really hard when you lose something or someone, but then you’re so much better without them and it’s a celebratory anthem for one. You get to that point, it takes a long time to get there. At first, you are hurting and whatever, go through all the emotions, but I feel like once you’re like, yep, I’m so much better without them, it’s like the best fucking feeling in the world. I felt like I needed a song that summed up that feeling. I went through a lot of shit this year, but like at the end of the day I’m like, everything happens for a reason. The hate, the breakups, it all happened for one reason or another and I’m doing fucking good and I just felt it that was like the best outro.

Now that you’ve had big streaming hits, can it be addictive to look up the numbers on a daily basis?
Yeah, I’m number and data-obsessed. I’m so crazy about it. I’m just constantly checking, checking, checking. I’m psycho, you would think I’m a data analyst.

What has been the biggest change in your life since “10 Things I Hate About You” blew up?
My whole life really changed. I don’t know what are the specific biggest changes, but since that song, I feel like it’s weird because I actually don’t feel like anything changed. I still feel as if nobody listens to my music and no one knows who I am and no one gives a shit, that’s what is kind of what’s in my head. But I have all these sold-out shows, huge streaming numbers, things that I don’t process. I don’t really believe these things that are happening. I literally feel like it’s day one of my music career and I have so far to go still, but I have definitely come a long way. It’s as if nothing has changed, but at the same time, everything has.

You are about to kick off your first-ever headline tour across Europe. How are you feeling? Are you someone who enjoys all aspects of being on the road with traveling, performing, etc?
I love the traveling. I love Europe, so I just can’t wait to visit all the cities. I have a tour bus this time. I just am excited to have my own tour where I play to my own fans. I’ve been an opener this whole year, so it’s been weird opening constantly. It’s going to be great to meet these fans that are here for me and connect with my music.

I’ve seen on Twitter that you’ve been manifesting a Taylor Swift support slot for her “Midnights” tour.
[laughs] Oh my god, yes. I’m a firm believer that if you don’t ask for something, you won’t get it.  I have pretty much no shame, so I just tweeted it.

Do you have a favorite song on Midnights?
God, they’re all so amazing. Probably, “Anti-Hero.”

It seems like you’re always planning for what’s next. Do you think the next project you will put out will be an album?
Definitely an album, most likely. I’m working on the album now, so whether that means I put on another EP before it or not, I’m aiming for the album, writing for it in full album mode.

Have there been any particular songs you have been purposely saving for it?
There’s one and it’s a ballad, actually. The production is even done yet so it could be like “Hot All The Time,” but it’s a slow sad song.