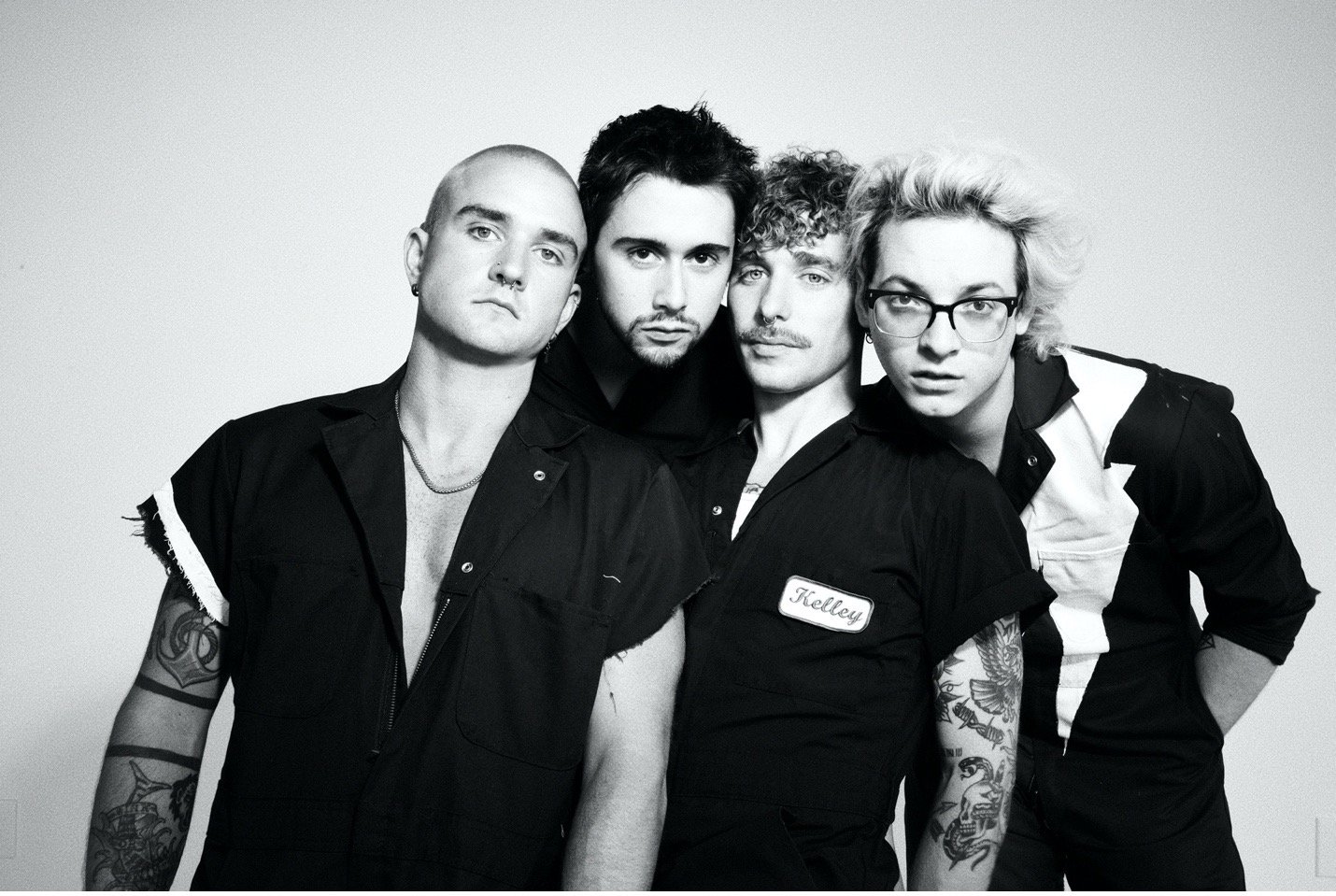 If most acts struggled to find an identity the way the band known as The Wrecks did at the start of their career, I’m not sure they would have pressed forward. Now, the band that once struggled to find its footing are about to embark on a major headline tour in support of their stellar new album, Sonder, playing the biggest rooms of their career thus far. I spoke with lead singer Nick Anderson, in between marathon writing and recording sessions for the deluxe edition of Sonder. The Wrecks share a similar sound to that of 5SOS, but are looking to establish their own dominance in the pop/rock lane.

The Wrecks toured the US extensively throughout June and July of this year, including a stop at NYC’s famed Webster Hall venue, which occurred after a venue upgrade was needed due to the demand. They closed that show, as they always do, with their signature song, “Favorite Liar,” which also happens to be their debut single, released in 2016. “I wrote that at 20-years-old,” said Anderson. “We recorded it ourselves, and I did the arrangement myself. I thought, ‘This sounds cool,’ and then it was on the radio. It set us on the right track, which is why I’m happy that it has sustained this long and that it was the first thing that caught fire. What better validation about a new project than knowing the first song you put out is going crazy? You’ve got undeniable proof of the 10 years you’ve been trying to make music, play shows, and be in bands that this time, something is happening.”

“Favorite Liar” turned out to be the lightning in a bottle that Anderson and co. needed, but it took a lot to get there. “With every new project, I thought that that was ‘the one,’” said Anderson, who cycled through a plethora of band names and solo ventures prior to landing on The Wrecks. One was an early iteration called Coastbound. “Coastbound didn’t have any fans,” he said with a smile. “It’s more like our current fans find Coastbound and all of that old stuff. When I moved onto the next project, it was never because I thought, ‘This isn’t working.’ I just saw an opportunity for the sound… I had already stumbled on the next thing.” Anderson, along with bassist Aaron Kelley, originally focused on a pop-punk sound, but it was unsuccessful, so they shifted to alternative. “We sent stuff out to some labels and the feedback we got was, ‘We really like these songs, but this early-2000’s catchy pop-punk thing isn’t in right now’”, he said. “The thing that was in was like… emo, Midwest, very yell-y pop-punk that we loved to listen to, it’s just not what I was making.”

Of course, the renaissance of pop-punk is thriving now in 2022, with artists like Avril Lavigne returning to prominence, Demi Lovato going “back to their roots” with new record HOLY FVCK after a long stint in pure pop, and the “When We Were Young” festival, a weekend featuring the biggest names of the genre from past and present, is set for Las Vegas later this month. Now, their sound is defined and as current sounding as anything else. “If you like a certain genre, or you’re good at it, just stick with it,” said Anderson. “There’s always a niche, there’s always an audience for it. More so back then in 2014 or 2015… people can find it a lot easier. There are so many people with big followings that no one has ever heard of because everyone has their niche.”

The band recorded their debut EP, We Are The Wrecks, which included, “Favorite Liar,” in three days back in 2016. The recording took place in the same week that the group came together for the first time. Under a time crunch due to recording in a location they were not granted permission to be in, they needed to work quick. Anderson came into the room with the songs already written and somewhat conceived in his head, which is what allowed for such a quick recording process. “If that week didn’t happen, I don’t know what trajectory we’d be on,” he said. “Our biggest and most-streamed song recorded and thrown together within the first week we were a band.”

In stark comparison, the band’s debut full-length album Infinitely Ordinary, released in 2019, took just about two years to complete. Prior to that, their EP Panic Vertigo was released in 2018, but it didn’t come easy. They parted ways with the original producer of the project after becoming dissatisfied with the direction it was headed in, and rerecorded it from scratch. A song from that EP, titled, “James Dean,” would serve as a major milestone for the group. “That was a song we were able to convince our team and everyone who works with us that we could make this music on our own,” he said. “That we don’t need the help of outside producers, and we’ve been making and producing our own music ever since.”

While they were determined to make their music on their own terms, they still needed to hone their craft. Working with established acts like Nothing But Thieves and Hoodie Allen, as well as playing on the same bill as Paramore and Dashboard Confessional, helped them do just that. “I learn something every single day I work with another artist,” said Anderson. “Nothing But Thieves taught us a lot about the road, how to treat your crew, what it’s like to even put on a show, and how to engage with your audience. Some of the other bigger acts we’ve toured with… it’s really just about seeing how they run their show so that you can pick and choose what inspires us for when doing our own headline shows.”

Infinitely Ordinary contains the track, “Fvck Somebody,” which will, likely, soon overtake “Favorite Liar” as their most streamed song. It’s like Panic! At The Disco meets AJR… slightly campy, modern, and nothing less than an earworm. Well within the confines of the alternative label. Their most recent project, Sonder, released earlier this year, establishes itself as a clear nod back to their pop-punk roots within the first 30 seconds of the opening track, “Sonder.” However, the emotions come in waves. Intense and raucous at some points, smaller and intimate in others.

There’s also some real versatility on the record, with “Unholy” delivering some heavy drama and almost a theatrical flair, “Dystopia” sounding like a long-lost track from The Killers’ 2020 record Imploding The Mirage, and Anderson, likely unknowingly, channeling Conan Gray in his vocal performance on both “No Place I’d Rather Be” and “Ugly Side.” This is no surprise, as Anderson’s are wide and varied. He lists bands like Cake, Cage The Elephant, Vampire Weekend, and The Strokes as models for The Wrecks’ sound, and coined Lizzy McAlpine as his current favorite. “I’m all over the place with the style and I never want to write the same song twice,” said Anderson. “There’s a lot of bands that I love because they do the same sound all the time, I just like to flex some diversity in the music. It makes it very obvious for people what their favorite tracks are, and it gives me a feel of what people are gravitating towards. Then, I can keep my finger on the pulse of our fanbase. We’re not in an age anymore where the radio or record labels are telling people what to like. It’s democratized, as much as it can be, if you have a real fanbase. We have such a great, engaged fanbase that I have a big data set of people posting, tweeting, and tagging us in what they like and don’t like. They’re telling us the truth about the widespread accessibility that the songs have.”

Anderson sees The Wrecks on an upward trajectory, but doesn’t have an answer, at least one he’ll reveal, of what would bring him the ultimate satisfaction. “I think I’ve chosen to be more content and more complacent for the sake of my own mental health and just learning to be happy with where I’m at,” he said. “That doesn’t mean I’ve stopped working though… I still have this feeling of, ‘I need to get out, I need to get out’, scratching and clawing to get out of my small town and make something of myself. I just put that energy towards the art of it.”