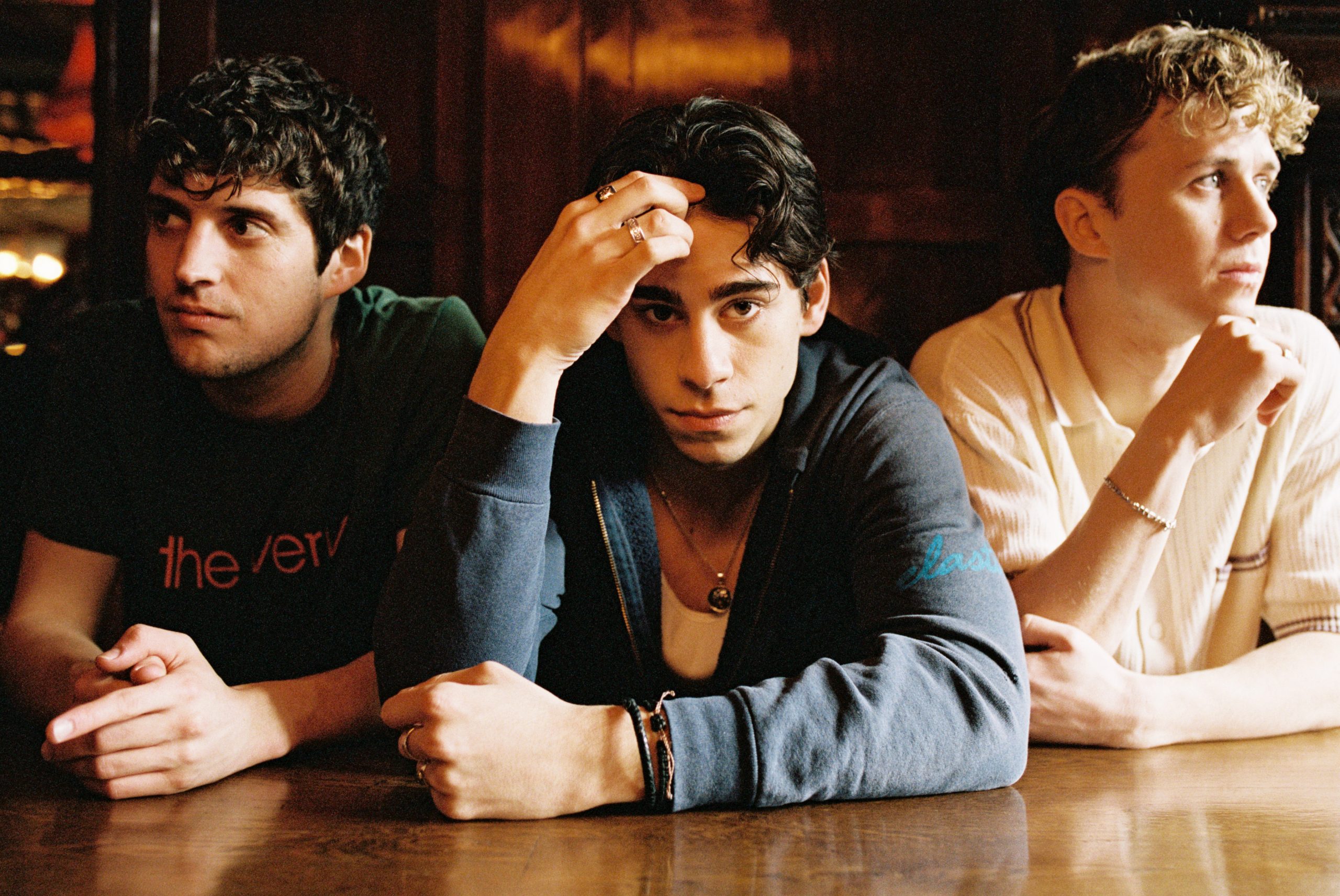 English-Irish boy band New Rules probably already sound very familiar. While you may initially confuse them with Dua Lipa’s hit single of the same name, you will quickly realize that the talented trio — made up of Ryan Meaney, Alec McGarry, and Nathan Lambert– have been grafting hard for the past three years, making sure their music reaches as many audiences as possible.

In addition to headlining their own tours, New Rules have also served as a support act for both Little Mix and Julia Michaels. Since forming in 2019, they have released two EPs and most recently dropped their debut mixtape, Go the Distance, via Elektra Records.

While millions of fans have connected to New Rules’ music through their songs, they have also built a live reputation that keeps their audience coming back for more. Following their recent headline shows last month, they will embark on another tour across the UK in January 2023.

“We’re so excited for these upcoming shows. We miss our Midlands, Northern and our mad Scottish fans and we couldn’t resist another London date off the back of our party in Bush Hall,” the band reveals. “Can’t wait to see you all there. Bring your voices and don’t be afraid to lose em.”

During an interview with EUPHORIA., we learn about the formation of New Rules, their musical influences, their latest project, and what else the future holds for them.

For those that don’t already know, how did you guys form?

Nathan: Okay, so we met basically on Instagram. I was just looking for people who wanted to write songs with me and I saw Alec on Instagram, he was doing a video, and saw Ryan doing a cover of Hozier and I messaged them individually and said, ‘Do you want to meet up and do some song writing sometime?’ and they both separately did. Then we just kind of organized a weekend where we met up and I didn’t know Ryan was flying from Dublin, but then he got there and I was like, ‘oh cool.’ We wrote a bunch of songs and they turned into the first two releases and it was just like, okay, cool, we’re a band.

How and when did you each develop a love for music?

Ryan: Very early on, for all of us, I think. I mean I have family that tell me that I’ve been singing since like a baby. Singing Robbie Williams, actually.

Ryan: There is a lot of music in my family, it’s a pretty stereotypical Irish family. Whenever there’s an occasion the guitars come out and we just have a sing-song.

Alec: Me and Nathan are still getting accustomed to it. Whenever we go over and there’s a party at the Meaney’s the guitars come out, they’re like ‘mind your voices now guys, we’ve got a show the next day,’ or we’ll all end up losing them.

Nathan: I think I was eight when I first picked up a guitar and I think you boys were pretty much a similar age.

Ryan: It was probably the Beatles.

Nathan: It was the Beatles, when I first heard the Beatles I was like “oh mamma.”

Alec: My dad’s side is very musical. My dad grew up in bands and then I grew up playing in bands at my secondary school forcing my mates who didn’t have a musical bone in their body to learn instruments and be like, guys we’re going to do this, don’t know how but we’re going to do it. I had my dad’s iPod which was stacked full of a lot of music. A lot of Dave Matthews, my dad’s a big Dave Matthews fan.

How did you come to choose the name New Rules?

Alec: Well, a lot of people confuse it with the Dua Lipa song, which to be fair, it might have been that…

Ryan: Someone suggested it. We were asking around because, I mean, I think it might be the hardest thing in the world, picking a band name. We were kind of a bit stuck, so we just asked people. And we were just writing away in the background, we didn’t really need a band name yet, but we were just like, we want a band name. Someone suggested New Rules and for a second we thought, oh everyone’s going to get it confused with the Dua Lipa song, and no one says that anymore.

Nathan: It was also the only one that we remembered out of this long list of names, that must have something to it.

As a trio, who are your main influences?

Alec: Well, we love Ed Sheeran, all together. We’re big fans of theirs.

Ryan: We bonded over John Mayer, as well, when we all met. So, a lot of singers/songwriters in that world. And then obviously just bands as well. Kings of Leon, The Kooks, lots of stuff like that.

Nathan: I mean, we all listen to everything between us, we listen to a lot of music, but we all kind of grew up on a lot of bands and singer/songwriters.

You released your debut mixtape, Go the Distance, in June. How does it differ/ or compare to previous releases?

Alec: Yeah, the biggest body of work and it was kind of just a compilation of the best songs we felt we’d written over the past like year. We were just super excited to get it out, cause we’ve just written so much music and it’s just something that we just want to keep on doing, keep on releasing loads of music for the fans because they definitely have an appetite for it, they love it.

What is a day in the life of New Rules like at the moment?

Ryan: We kind of sit around and have a little plan of what we’re going to do. Obviously, it’s different when we’re on tour, when we’re on tour it’s just non-stop, it’s all go, but I think in the house we kind of like to do our jobs. We’re finishing lots of new music at the moment, so that takes up a lot of time. But we try and split between that and crack on with maybe some socials and stuff like that.

Nathan: We’re writing a lot as well so, like Ryan said, every morning we kind of sit around and work out what we’re going to do with our day, but often its writing or finishing a song.

Nathan: Playing The Olympia in Ireland as well, and playing Shepherd’s Bush Empire, on our last tour, they’re pretty iconic venues in our hometowns, so it was great to play those venues.

Ryan: Yeah, that was pretty cool. I think we’d only been a band for a year and a half, two years maybe, when we played those rooms so yeah, there was a lot of hardcore fans in that room, which we’re really proud of. I mean that is the thing we’re probably most proud of, how loyal our fans are.

Nathan: We’ve built a community; I mean that’s pretty cool. I don’t think every band has that.

What is your dynamic like when creating songs, do you have a particular routine when writing?

Nathan: It’s always different, it’s usually one of us has some kind of idea and then we’re sit down with some guitars and then generally we just start kind of like singing rubbish until something sticks and we’re like that feels good.

Alec: And we get very excited.

Nathan: We get very excited, sometimes we get too excited and start celebrating and don’t finish the song!

Can you think of the craziest fan experience so far?

Alec: We get loads of fans that travel from like loads of places, like when we did the shows in the States, we’d be chatting to fans in the queue outside and they’d be like ‘Oh, I just drove four hours to come and see you’ or ‘I just caught a flight from six hours away to come and see you’ and it’s just always crazy to hear that because, you know, that’s commitment and obviously we’re so grateful for it.

Ryan: And we’re yet to do a long tour in Europe, which we’re really excited to do at some point. But yeah, there’s a lot of European fans who fly and they don’t miss a tour date when we do it in the UK and Ireland which is just insane. Someone came from Egypt today for tonight’s show and it’s an intimate show. It’s amazing.

What’s next for New Rules?

Alec: Lots more music and lots more shows, we just want to keep releasing. We’ve got so much written music now that we’re just going to finish and get out.

Tickets for New Rules’ UK tour will be available from September 9.