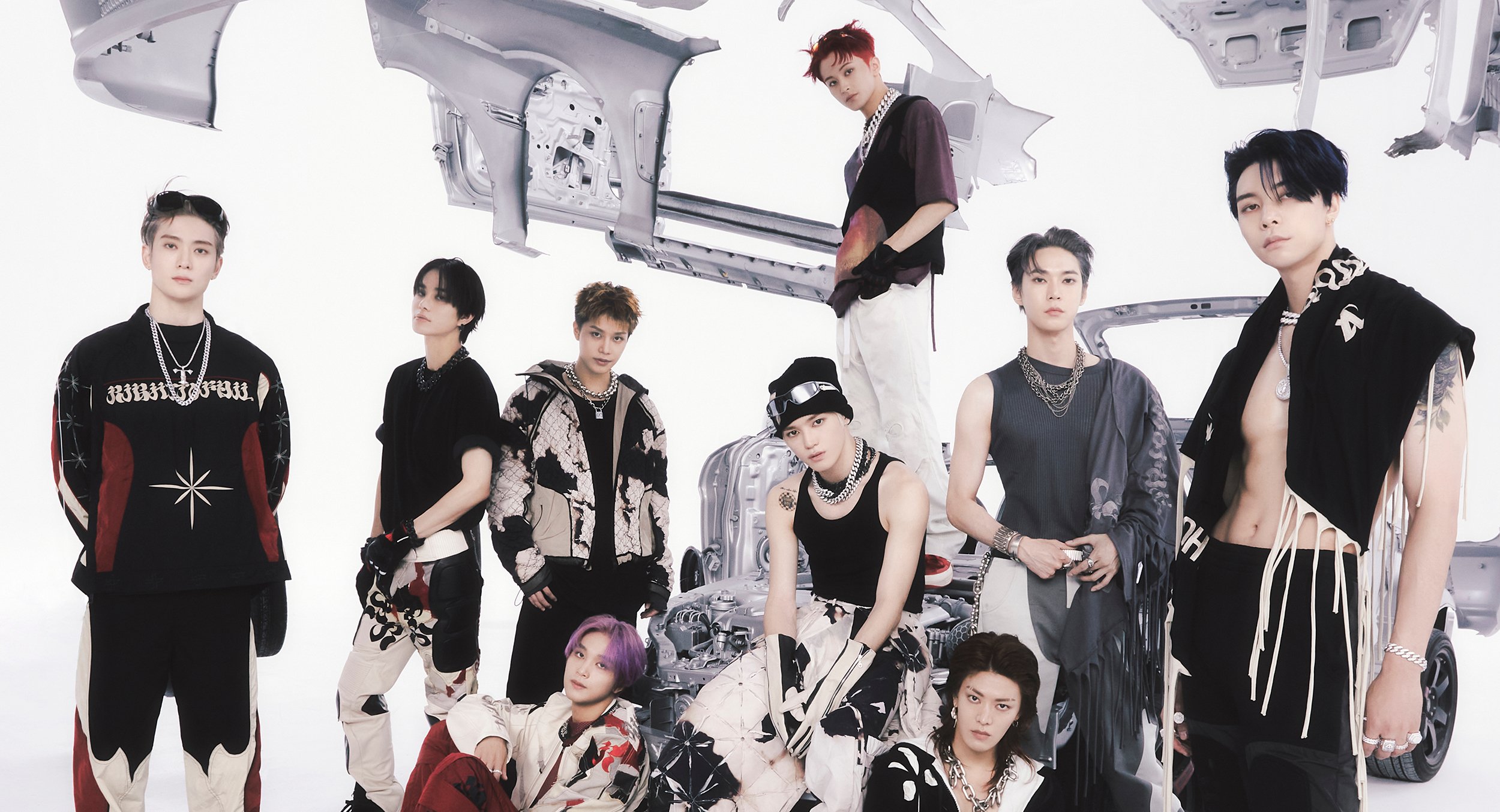 The illustrious K-pop ensemble known as NCT 127 is quite frankly in a league of its own. After securing some of the most coveted successes in the business, the group (TAEIL, JOHNNY, TAEYONG, YUTA, DOYOUNG, JAEHYUN, JUNGWOO, MARK and HAECHAN) has proven to have their finger on the pulse of K-pop’s limitless potential for several years now. But even with a trove of impeccable work behind them, the group’s new album 질주 (2 Baddies) upgrades their already iconic stature and promises NCT 127 is prepared to creatively push themselves even further. 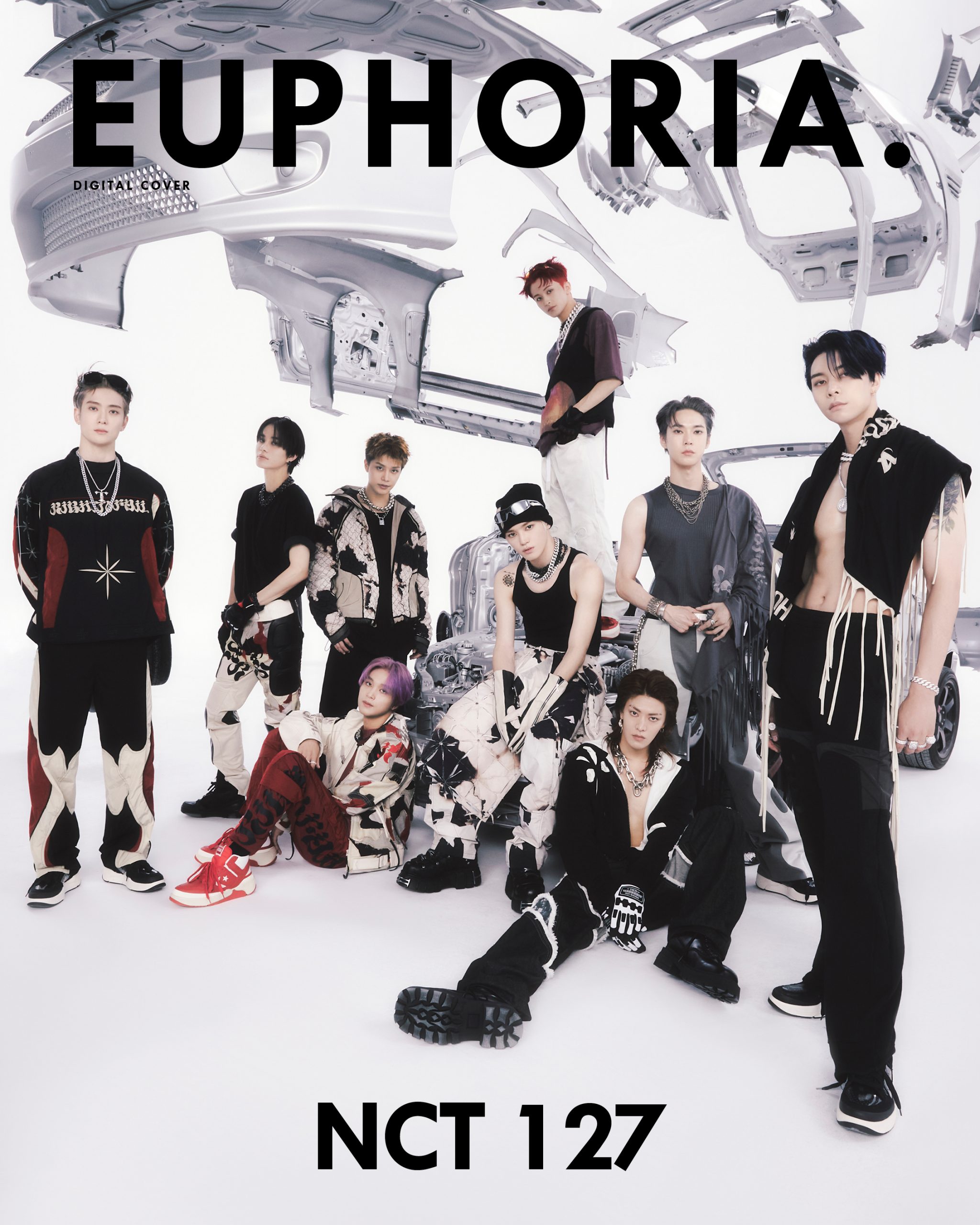 Following an unmissable debut in 2016 under the top-tier K-pop label SM Entertainment, worldwide listeners developed organic respect for the group, ultimately resulting in a passionate fan base that’s since increased tenfold. According to DOYOUNG, this unpredictable moment in their career has been a joint effort between NCT 127 and those who have shown them limitless support over the years. “I think we’ve come up step by step so far. We had our own steps, and to climb those steps, not only us but our fans worked hard together. I hope people would be able to acknowledge the whole process of how we became the NCT 127 we are now.”

DOYOUNG then reflects on the urgency of getting to connect with audiences and that overall impact, explaining, “Also, thanks to our fans, we achieved many things, but what’s most memorable is the concert. It was a time to enjoy and reminisce about the albums released so far with the fans.” A sentiment supported by JAEHYUN, who divulges, “I can’t forget every promotion since my debut, but I especially remember the fanlights I saw at the concert. I am always grateful to our NCTzens who support us so that we can grow every moment.”

From the addictive energy of “Cherry Bomb” to the juggernaut track “Regular,” there’s a transparent ability to illicit a need for more with listeners, with yet another elevated showing of the group’s potential on their high-energy title track “질주 (2 Baddies).” In order to form such a trusting bond with fans, there’s a recurring degree of musicality that’s met by NCT 127, which can be credited to countless qualities. However, the youngest member HAECHAN points out, “Throughout the overall flow of [an NCT 127] song, the part where you feel like, ‘Huh? It’s unique. But it’s really cool and good’ that is the characteristic of our music. And I think the strong and cool performances that fit NCT 127’s music make it stand out more.”

TAEYONG then adds, “I think our fans like the fact that we constantly show our own unique colors. We have been and still are working hard to improve in many ways for our fans who support us.” He optimistically ends his train of thought by revealing, “Our fans like to see our growth. NCT 127 and our fans give off a lot of energy together, and I like that.”

As a result of the tireless efforts that have gone into their career thus far, NCT 127 has surpassed legendary milestones that aren’t common amongst groups and soloists of all backgrounds, with millions of albums sold worldwide. In fact, just last year, they moved over three million copies of their album Sticker, an accomplishment that isn’t lost on JUNGWOO. “I think it became a source of encouragement and motivation. Although numbers aren’t everything, it’s an achievement that our fans made with their support for us, so we try to work harder in return.” He then elaborates, “I believe that if we try our best in whatever we do, we will be able to go a step even further. So, we’re looking forward to showing everyone how NCT 127 is always improving!”

TAEYONG then makes an effort to express his sincere gratitude for recognition despite the changes that came with the pandemic, telling us, “I am just so grateful knowing that such a great accomplishment was achieved thanks to our fans. Actually, we were not able to meet our fans in person for a long time due to the COVID-19 pandemic, but I was still able to feel the love and support our fans were sending even during those times. I’m so thankful for such support and it is the source of motivation that makes me do my best.”

Of course, the group’s down-to-earth posture makes those connective moments even sweeter for fans, and with the mention of their desire to return to live music on the NEO CITY — THE LINK tour, it was impossible to not pick up on their excitement for what’s to come as they kick off the North American leg in the fall. JOHNNY gushes, “Performing in front of our fans has always been meaningful, but I think it’s even more precious now. Online performances were great too, but I’m happiest when performing in front of an audience, and I enjoy sharing that happiness with the audience in person.”

JAEHYUN then contributes to the discussion, reiterating, “It’s always been an amazing experience meeting fans from all over the world. Although I personally have put a lot of effort into many things while we weren’t able to do in-person performances during the pandemic, I’ve been waiting for the pandemic to end and to finally meet our fans. That’s why I’m really excited about our upcoming tour.”

With this tour being a long time coming, enduring listeners are also rather eager to witness the new, invigorating era of NCT 127 firsthand, which TAEIL describes as, “What the fans like and want the most.” Before elaborating, “I hope people will look forward to the better and improved NCT 127.” Speaking up about the palpable evolution of their discography and how “질주 (2 Baddies)” accommodates that need for growth, MARK goes on to suggest, “‘질주 (2 Baddies)’ is a really cool song that is a mix of everything we’ve ever done until now. Since each of our songs has its own characteristic, it’s a little hard to compare, but I think I can say that ‘질주 (2 Baddies)’ added a more advanced and stylish vibe to the usual hip and intense music that NCT 127 does best.”

Over the trajectory of the 질주 (2 Baddies) album, NCT 127 does just that, pulling from their recognizable and atmospheric music with a convergence of hip-hop/electronic, and undertones of synth-y excellence that crescendos into NCT 127 spectacle like no other. With an unwavering respect for their predetermined sound and the obstacle of keeping things fresh, HAECHAN ponders what track required the most labor before sharing, “When I first heard ‘Time Lapse,’ I thought that it was a difficult song, but also thought that it is a song we must do at the same time. While recording, I realized that I needed a vocal tone that breaks through the unique vibe the song carries so I tried recording by scratching my voice and also using a very soft, fairytale-like tone for the bridge part. And that is how the song was completed with NCT 127’s unique colors.” JUNGWOO dually follows up on the importance of tone and in-depth genre exploration as he clarifies, “Since we usually do Neo and hip-hop genres like our team name, I think we have to change our vocalization and tone…etc. according to it.” Speaking from his own detailed studio experiences, he concludes, “I always consider how to express the color of [each song] better.”

Apart from the tenacity of the album’s more fearless tracks, there are several soft-spoken moments to revel in such as the potency of “Black Clouds” with the potential for such emotional resonance with listeners. Regarding the considerably gentler side of the group, TAEIL offers his stance on what it takes to construct that particular dynamic, suggesting, “When it comes to expressing the gentler side of the group, I think it’s important to express a relaxed and warm feeling/emotion without overdoing it.” YUTA continues the discussion admitting, “Since each song has its own lyrics and concept, I tried to record [the song] accordingly. I tried my best to express the emotions that fit the song concept as much as possible, so I hope everyone who listens to it would be able to enjoy it.”

Considering that this is a full-fledged studio album, there’s obviously a welcomed opportunity to tell a relatively comprehensive story for the timeless NCT 127, which is equal parts alluring and nerve-wracking for any artist – regardless of stature. So Is there an underlying narrative that helped guide the group through the album’s production process? According to DOYOUNG, “NCT 127 always tries new challenges. This is why ‘new’ is the story we want to tell through this album. We also wanted to make a good album so that we won’t disappoint our fans who have been waiting for us.” JOHNNY then goes on to comment, “I think we will be able to show more of how we enjoy ourselves on stage through the title song. We’re planning to show a more relaxed/chill and cool side of us through this comeback, so please look forward to it!”

As we head into the final months of the year and NCT 127 is asked to look beyond the scope of their significant album 질주 (2 Baddies), the highly-anticipated tour, and extensive promotional opportunities, the members of the group make it clear that they’re strictly living in-the-moment, though still yearning to stay entwined with music. “I hope our album ‘질주 (2 Baddies)’ receives a lot of love not only from Korea but also around the world.” YUTA tells us before continuing, “But after finishing the promotion of this album, I really want to travel with our members and spend time with my family in Japan.” However, one final message must be addressed, as MARK pointedly emphasizes, “All I’d like to say is this… Our fans from all over the world will need to wait no more! We’ll be there!”

Whether you’re a brand new fan or returning supporter, rest assured that if NCT 127 makes a promise, you can rely on them to keep their word.