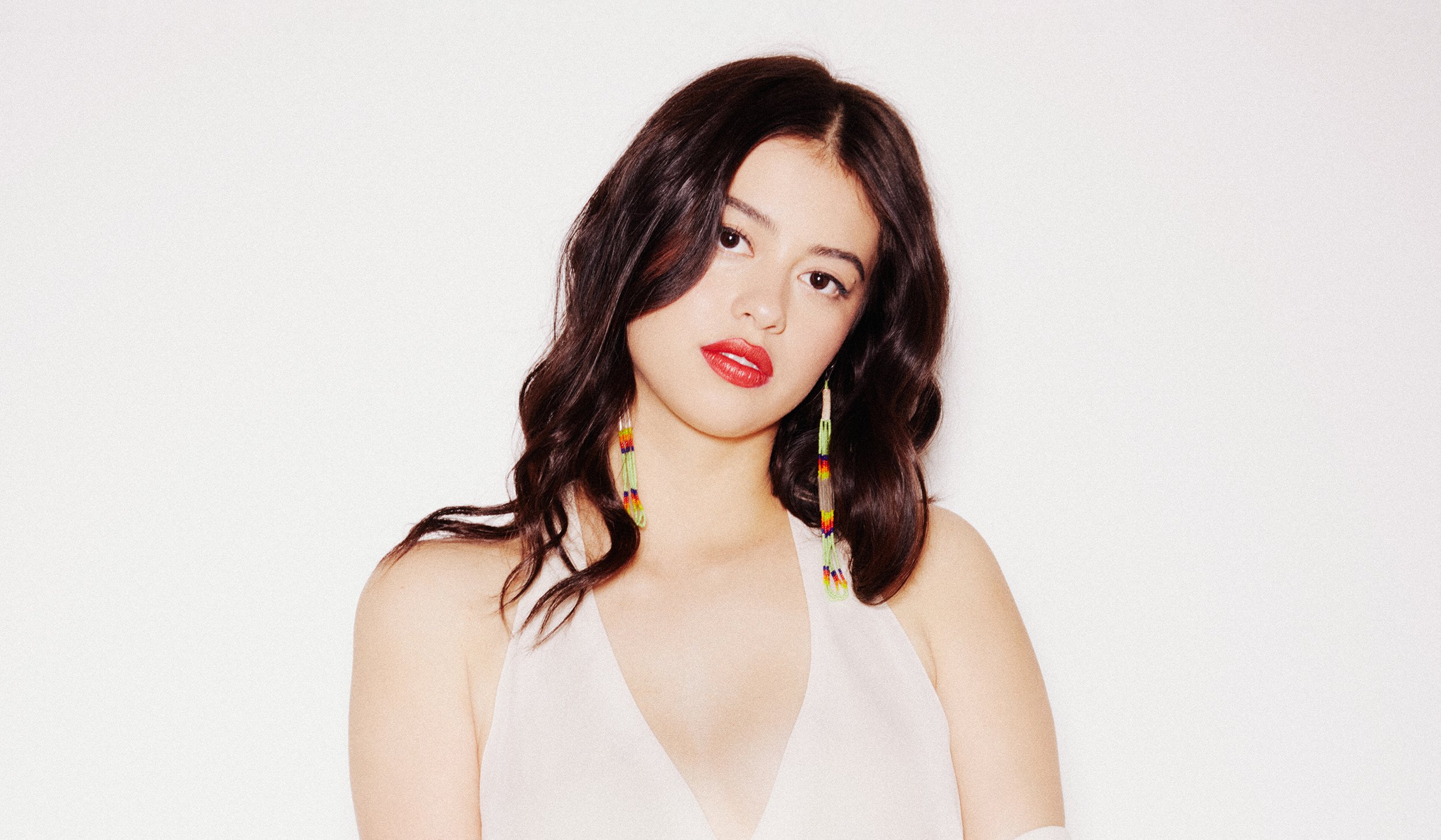 When you think of Amber Midthunder, what comes to mind is probably a whole lot of supernatural-themed action roles. Maybe you associate her with the martial arts expert, body-sharing mutant Kerry Loudermilk from Legion. Or maybe you think of the haunted, creative Rosa Ortecho from the CW’s alien romance drama Roswell, New Mexico.

Most recently, Midthunder stars as the tomahawk-wielding Comanche warrior in Dan Trachtenberg’s Prey. Really, though, Midthunder is just looking for great art. In that way, though she says her character Rosa is nothing like her, she actually shares that artistic integrity with her Roswell character. When asked about any of her roles, she can’t help but praise her coworkers, both on and off-screen. She is fiercely protective of her characters as well, wanting them to shine through as the individuals they are, instead of just a combination of 2-dimensional traits, especially when it comes to acting as an Indigenous woman.

“I don’t wake up and think ‘Oh I’m going to be Native today!’ I also have other interests, I like tea, I like poetry, I like kickboxing. I think that’s probably what my friends would talk about first. I like to give my characters the same credit,” she says. That dedication certainly shows through in each role she plays, every single one of them a fully realized person themselves. Now, with a brand new indie feature called The Wheel, produced by Midthunder herself (released in July), and we get to see her in a whole new light. It goes without saying, that we can be sure anything she does will be phenomenal. Amber Midthunder is an artist to watch.

This is the final season of Roswell NM and your character has had one of the most fascinating storylines. Rosa has had so much growth since her return, reconnecting with her sister and dealing with her addiction. Now that the show is ending what can you tell us about your journey with this character and how you feel about wrapping up her story?
I love Rosa, I’m happy to have had four years with her! I’m excited for how everything gets wrapped up in the show, especially her storyline. As you said, I think she’s a very rich character, she’s had a lot going on throughout the seasons, so to journey through a story of addiction, especially on a network like The CW has been great. With her it’s also a journey of sobriety and recovery, it’s not just like, you get sober and then everything gets easier, so getting to show that stuff has been such a cool opportunity and I have a lot of fun with her, and her art. She’s very different from me so I love that.

Another show that had you playing a really amazing character was Legion, that one was so interesting because you were sort of sharing a role with another actor, playing a teenage girl who shares a body with an adult man. Can you talk a bit about how you approached that role and what it was like being on such a mindfuck of a show?

I love that we’re doing a throwback! To me, Legion holds the most special place in my heart. I think everyone who was on that show is by far the best at what they do, no matter what that was. Getting to share so much time with someone like Bill Irwin, who is literally a legend, is such an insane way to kind of step into who I am as an actor and artist. So, approaching that, I just constantly felt so fortunate. I got to expand my artistry and toolkit and was excited to show up for work every day. I have so much love for that experience.

This leads me up to your new film, Prey where you play a Comanche warrior who gets to fight a huge, scary alien monster. This is such an amazing role because it centers a Native American woman in such a powerful role which is pretty rare in film. How did it feel to play that role?

Everything you just said is so crazy to hear back and it’s pretty insane to stop and think about all the things our movie encompasses. I’m so proud of everything it is. It’s a great movie and it’s exciting and entertaining and all the action is there but I am most proud of the representation. Dan [Trachetenberg] and 21st century took the leap to get behind something with an indigenous action hero. I can’t think of another example of that off the top of my head. So this proves so many points. It gives Indigenous women a figure inside of a film that we can be proud of and see ourselves in. We also have these characters that are shown through a lens that we can be proud of. The history of film and television has; ’t had great representation for Indigenous people. Often times we are there to serve another character or we are hyper-spiritualized or turned into really violent, savage, sub-human characters. In this movie, we get a variety of people and personalities, and relationships. Especially in a period piece, all these elements are so rare.

You’re a successful actress and also a BIPOC woman, I feel like when an actor is a minority they’re expected to use their platform to talk about their heritage, but I also feel like in a way that’s sort of an unfair place to put someone in. It’s great to talk about these issues but at the same time, why should all the pressure be on the performer themselves to educate everyone else?

There is the expectation of BIPOC for their ethnicity to be their personality. It doesn’t make sense and of course, it’s offensive. There’s this concept that all people of one race are the same and that is often how it gets represented when characters are being written. Maybe there is one character in a show or movie that is native and it’s like ok check that box, there it is.

And that’s all the traits we have in their minds and obviously that’s not the case, and I think it’s done really well in shows like Reservation Dogs or Rutherford Falls like, ok no, we’re just people with different personalities who like different things and have different hopes and are just all over the place. I think about that a lot when navigating what roles I want to do, especially Indigenous-specific ones. I mean, of course, I wake up every day and I don’t have a choice in what ethnicity I am, I don’t wake up and think “Oh I’m going to be Native today!”

I also have other interests, I like tea, I like poetry, I like kickboxing. I think that’s probably what my friends would talk about first. I like to give my characters the same credit. I like it when it’s a surprise. Like with Legion people will see me and they will see that “oh she’s a fighter and she’s also this kind of military-esque thing with a weird relationship” and then you find out later, oh the actress is native. Indigenous actors have so much more to bring to the table than diluting all of us into our ethnicity. 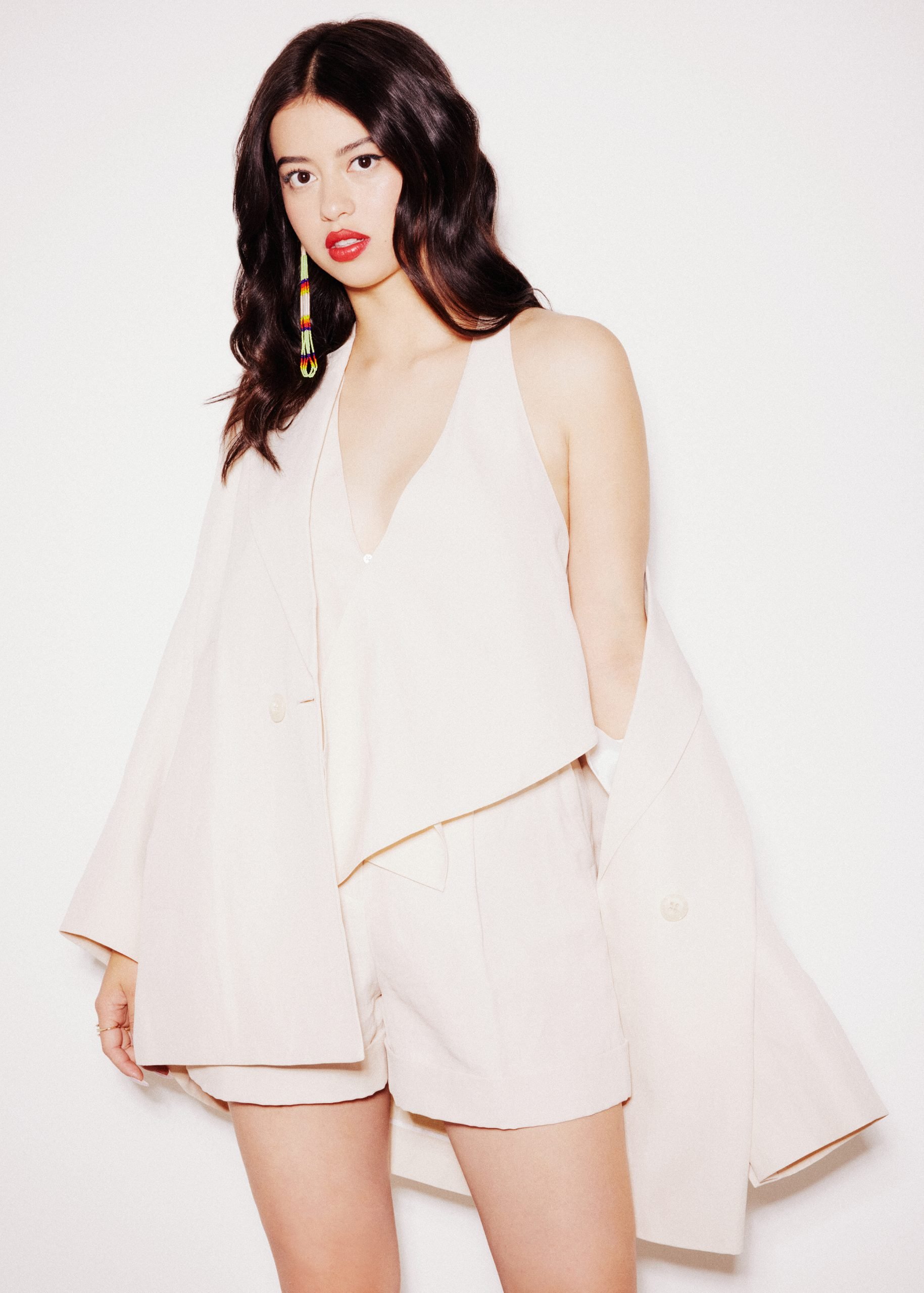 I also want to ask about the training for Prey, there’s a lot of action in it! Was that fun to shoot? How crazy was the training for that?
It was a lot of things and fun is one, for sure. It was very challenging and cool and exciting to show up to work every day and never get to coast, but I feel like in this one experience, I did so many things that like… When I decided to be an actress I don’t think I expected to be like “this week I go in a mud pit! This week I go in a river! This week I fight a monster!” Dan is such an incredible director and person so the environment he created was so open and caring. Everyone had a voice and it was centered on everyone feeling like the product they were creating was the best.  Getting to show up and go on wires and feel like it was an environment with a supportive leader was so cool.

You’re a bit of a genre queen with your film repertoire having all these roles in strange sci-fi works, was this a choice on your part or a coincidence?
That’s a happy accident. What I am chasing is just the best quality of work and I happen to have grown up very active doing rock climbing and Brazilian jujitsu. I bought my father a set of throwing axes before I even signed onto Prey and then it just so happens my character has a tomahawk. All that stuff that empowers me has been available so it’s just great that the things I like to do in real life have coincided with my work inside of projects that are focused on having good artists.

Dan is an incredible director and whatever he chooses to do next, even a play-style drama, will be incredible so having him in this movie was perfect. I mean, think of Noah Hawley doing Legion, it was such a mind fuck, psychedelic thriller and it just happened my character had a lot of action. So what I’m really chasing is great art and great artists and I just happen to do a lot of fun stuff at the same time.

Would you rather be an alien or fight an alien?
Honesty getting to have superpowers is so cool. That’s such a fun element of every character. Obviously, Prey was fun to do, to do a period piece and be innovative and do so much. But in my experience playing a character with above-average abilities is so cool. Acting is such an absurd job and to get to do absurd things is like, you’re already there so why not keep going.

What are you working on next?
I just had a film release in July called The Wheel that I produced. I’m so proud of it and it’s so different from any of these projects. It’s a small indie, character-driven film that we made in August 2020 in peak pandemic, so a small crew of people went out to Big Bear, California. We quarantined together like summer camp in the woods, and then film actually premiered at TIFF last year.