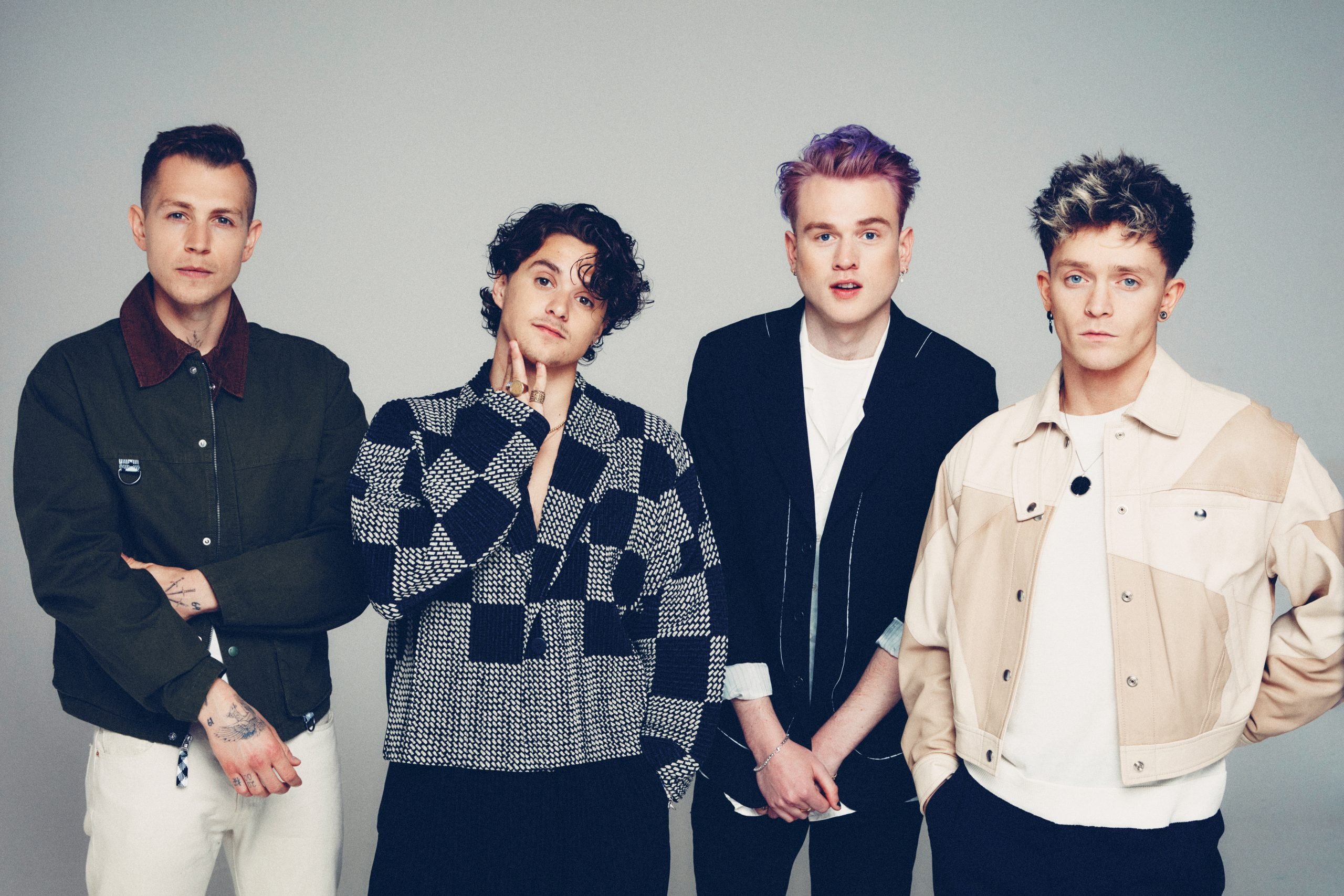 The Vamps are celebrating their 10th anniversary in the best way possible–with a nationwide UK and Ireland tour this fall.

Unlike most bands who have come and gone, and even reunited during this period, The Vamps are a minority who have been going strong for a whole decade. Some of their most noteworthy accolades include two #1 albums, becoming the first band to headline at London’s iconic O2 Arena five years in a row, performing to over 2 million people, and generating more than 6 billion streams.

EUPHORIA.‘s Fabio Magnocavallo was invited to The Vamps’ label office just hours before their exclusive, intimate gig at Lafayette, where they played to 500 lucky fans. In their chat, we learn about the history of the band, their upcoming tour, and what the future holds for the band.

10 years is a long time to have been releasing music and performing non-stop. Does it feel like it’s been a decade since it all started?

Bradley: It’s like a weird mix of both. It’s gone really fast, but also so much has happened at the same time. The pandemic over the past two years kind of took us away from the whole thing, but it’s been an amazing journey. I think it’s probably gone really fast for all of us in reality just because we’ve packed it in with loads of tours and albums.

Did you ever imagine The Vamps would have this much of a global appeal early on? Was that always the plan when performing covers on YouTube in the early days?

James: I mean, we did it just for shitloads of money to be completely honest. And girls. [laughs] I didn’t get either!

I think that the beauty of what happened with The Vamps is the way we started. I pinpoint the beginning of The Vamps when we did this busking thing, which sounds like such a shit made-up story, but it’s actually true. We busked outside another record label before Connor was in the band. I think we knew of Connor, but he wasn’t with us at the time. Someone filmed it put on Twitter and it was like that era before Instagram, even obviously before TikTok where Twitter was just like wildfire. After posting it, it did just really build very organically. I think for me that was the start point. We’d done things like pub gigs and stuff, not as a band, but separately in our hometowns, but we never really knew the nature of like how social media takes over. Before we knew it, it started spreading around and there were people cropping up in various different countries. All of a sudden we were getting messages from countries that I genuinely didn’t know a lot about. I think like early on were like blown away by the global sort of like potential with The Vamps but I don’t think we ever anticipated that it would be like five albums and 10 years. Like, we wanted that to happen but it was at a time when people were getting signed and dropped quite quickly.

Do you think other bands such as 5SOS launching at a similar time helped with your success and gave you more of an appeal to the market?

Tristan: I think it was a good time for that type of music. We were all similar music and it was an obvious time for the type of genre we were.

Bradley: Yeah, I think it helped. I think less so now actually because I think we’re in a really interesting time in music, but I think for a long time, the music industry tended to go in cycles. So, that’s why there was a resurgence of it through us and bands like 5SOS. It’s nice to be able to look back at that era of music as it has a really specific sound. It’s like quite cool to be part of that.

You would launch yourself with your debut single, “Can We Dance.” At the time, were you confident in that choice, or were you debating on others?

Bradley: We were debating on two. Our second single, “Wild Heart,” was actually the fan favorite. That was the one that we wanted. None of us initially wanted “Can We Dance.”

Tristan: Our two options were “Cecilia” and “Wild Heart.” I remember being in [Bradley’s] living room and Richard calling us a week before and he was telling us that we should really go with “Cecilia.” But, we all decided on “Can We Dance.”

They all became singles in the end, so it worked out!

Bradley: I think your first step is a really important one and “Can We Dance” was absolutely the right one because it just has that statement and has that vibe to it.

James: It’s funny that after all this time, the very first line anyone ever heard from Brad epitomizes in many ways every night we’ve ever had [laughs].

Amongst the many things you have achieved over the years, what would you say are your proudest moments?

Tristan: Playing places like Korea was pretty cool. Manila, the arena there.

Bradley: I genuinely think this 10-year anniversary is a really, really big achievement. A lot of bands like James was saying that maybe started around the same time, there’s a couple of us still together, but a lot of you see a lot of artists disband. It feels like a real Testament to our friendship and our career that we’ve been able to stick it out through the ups and downs, whether it’s career ups and downs or friendship up and downs. 10 years is a really big milestone in any like friendship. Do you know what I mean? So, I’m really proud of that.

With the upcoming Greatest Hits tour, is the plan to try to perform as many singles as possible? I assume you had to compromise with album cuts on previous tours.

Bradley: It’s all b-sides [laughs]. No, yeah, we’re gonna try and cram it all in. The cool thing is there’s been obviously like singles that we’ve pushed throughout the years, but then there’s been songs that have just kind of done their own thing through the fan taking to it.  There’s a song called “Risk It All” off the first album that became a real, almost a single in its own right. We’re just going to try and make it as exciting and the best show that we’ve done ever done as it’s a real celebration. It’s been 10 years for us but it’s been 10 years for the fans as well. These guys have stuck with us for that length of time.

In October, you are releasing your own zine. What made you want to do that as that’s quite a unique concept?

Tristan: I think we want something special for the fans. I mean, we’ve always spoken about doing like a scrapbook so working with the label made perfect sense. We have all the footage that we haven’t used, interviews, and special things that are just involved. obviously like we’ve got the CD, which is kind of the greatest hits CD, in a way. It’s just something special for the fans to have I think. It was really fun for us to put together. We love the look of it and it’s a physical thing, cause obviously everything’s digital these days. We love doing vinyl, we love doing cassettes. We love physical items that people actually keep and our fan base loves that, they’ll be on that for a fact. So this was like a no-brainer for us.

I read that you had plans to re-record your debut album. Is that still the plan?

Bradley: That slipped out that did in an interview [laughs]. But at some point, it’s something that we would love to do. I think because it’s been such a long time since we’ve recorded those songs, I hope that my voice has matured in those 10 years. I was 16 when I was singing them and we’ve all matured as musicians. I think the way that we play those songs live now is completely different from how we were playing them in our first year or so.

So much has changed within the industry over the past 10 years. The iTunes chart was the main thing when you launched and now it’s shifted to streaming. What has it been like having to keep up with those changes? Do you enjoy the way music is consumed now?

Tristan: I do, I think it’s amazing. It almost gives you more of a chance if you’re an unsigned artist. It’s quite controversial the way writers get paid for streaming, etc. You know, that’s definitely an issue that needs to be resolved, but the amount of reach that Spotify gets you is amazing. It’s incredible how millions of people can view your music that wouldn’t have been able to before. I think it’s really interesting how BTS exploded around the same time streaming really did.

James: I remember after our first album, our whole business model we’d come up with our team was catered to the industry before streaming. We were very lucky that we have set time aside to like strategize how we release an album, and literally, overnight, the whole market changed. It was kind of like terrifying and a lot of bands didn’t make it through that transition. Our proudest moments are that we recouped our record deal a few years ago, which no one really does anymore. That just shows that you have to move with the times.

I’m sure a lot of fans are wanting to know this, but are you already working on new material?

Bradley: We aren’t at the moment purely because we spent a lot of time working on “Cherry Blossom” and then we toured that. We just want to take a bit of time away from writing for the band. We’ve all been writing for other projects and working on other things. It has been 10 years of just back to back to back, so I think the space for us to work on other things and live our life for a bit is a good thing for all of us as individuals and as a band. But I think next year at some point, there will be a sit-down where we’ll start working on new stuff.

How are you feeling about doing things on your own?

Bradley: I think it’s exciting because we’re all very supportive of each other’s individual projects. It’s good for everyone to stretch muscles in other areas. We’ve always been very collaborative, so whatever anyone does outside, anything that’s learned or any ideas that people get is all brought back into the pot when we come back together. It just makes for a really exciting first conversation when we started thinking about The Vamps stuff.

If you could give any message to your fans right now, what would it be?

Bradley: A huge thank you for the past 10 years. We can’t wait to see you on the tour. It’s going to be unreal, we’re very very excited. Thanks for sticking with us, here’s to the next 10 years!

Tickets for The Vamps’ UK and Ireland tour will be available from July 1.