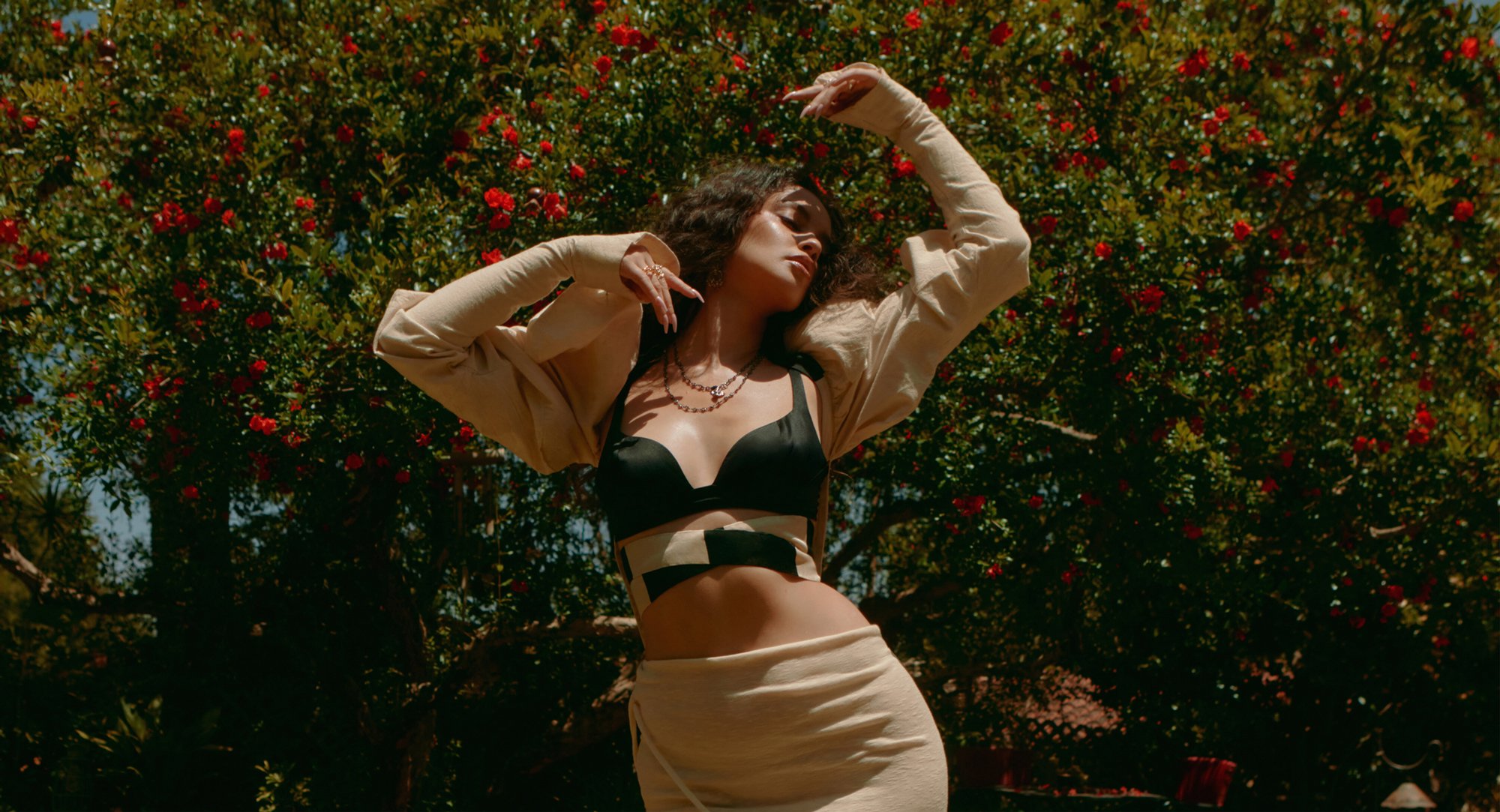 Last month saw dreamy R&B singer Sabrina Claudio arrive with her first album in nearly two years, Based on a Feeling. For an artist who had dropped a project every year since 2016, this was considered a break, especially when the most recent material she dropped in 2020 was Christmas-themed. Thankfully, she’s back – and stronger than ever. 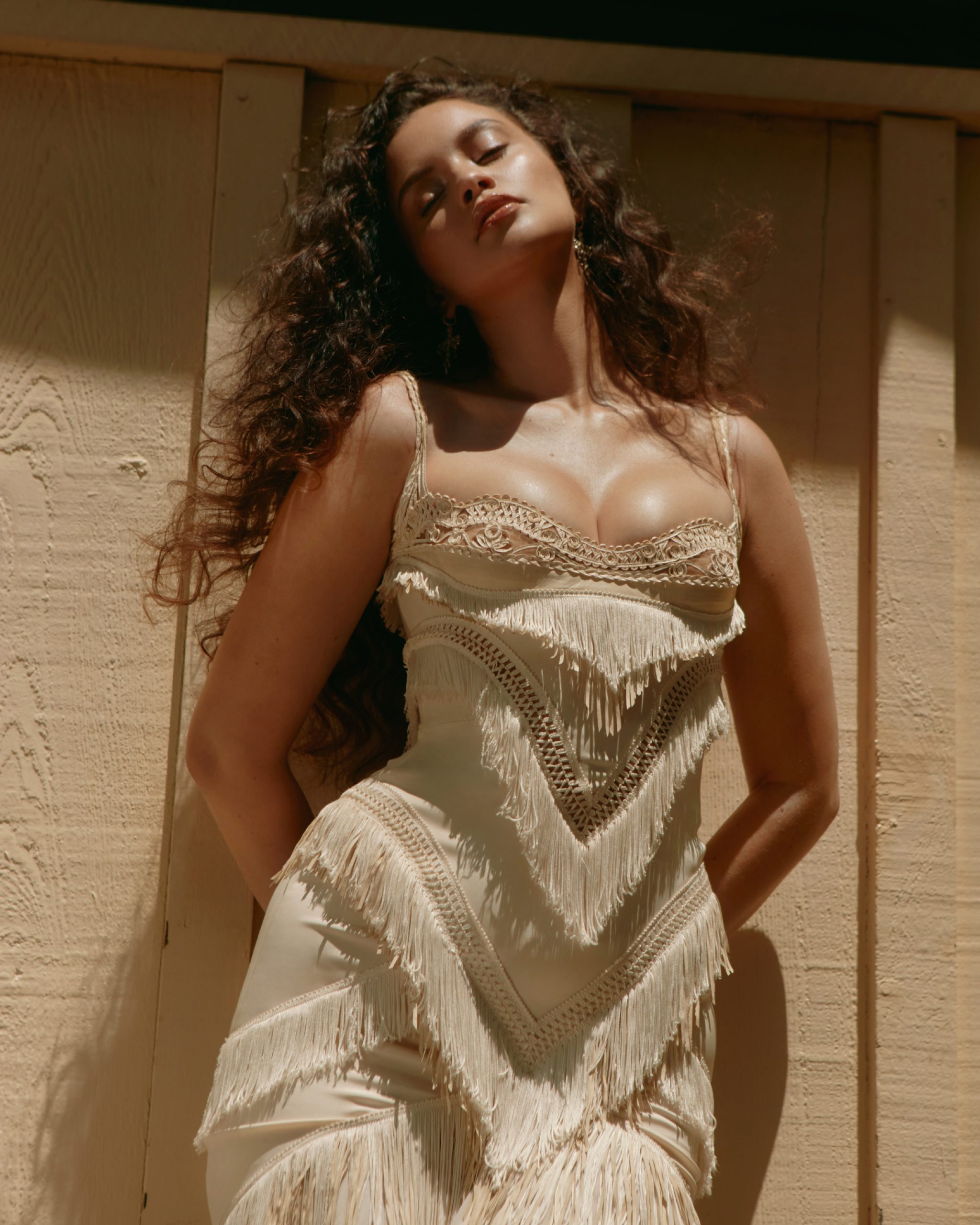 The pandemic played a big part in Claudio’s absence. Like a lot of us, a break was needed after constantly being on the go. However, the motivation to feel motivated took far longer than she expected, resulting in the 25-year-old not stepping foot into a recording studio for a very long time. “I’ve never felt that before to the point where it put this fear within me that I wasn’t going to be able to get out of this funk that I was in,” Claudio tells EUPHORIA. An unplanned hiatus first occurred partly because of the way the industry navigated around making albums during lockdown. “I just refused to do refuse to work over zoom. I just can’t work that way. I need to be in person and feel that connection,” she says. Another factor for Claudio feeling uninspired was having to operate with people she was supposed to have a healthy working relationship with. “It just stumped me and I just wasn’t willing to write any longer, as long as I was in that situation,” she adds.

Once Claudio was able to remove herself from any of the negative situations she didn’t wish to be a part of, it would still take a little longer for her to get into the studio due to the inconvenience of the pandemic. But like they say, timing is everything. “I feel like I got in when I was mentally prepared and everything around me was a lot healthier,” she says.

Talking of time, once the creative process got started, Based on a Feeling would be completed within three months, becoming the fastest album she’s ever made. Claudio credits that to the creative freedom that was handed over to her. In addition to that, her supportive colleagues allowed Claudio to go into every studio session with a “healthy mindset,” which made her feel “validated.” There was no pressure behind the music and no ultimatums were given. “I had full control this time, a hundred percent control of what was going down, obviously with the support of my label and my team who were willing to just do anything that I asked at any time,” Claudio explains. “There was really no battle this time around with this album because I’m in a completely different situation with brand new people. It just felt again healthier. I felt more confident too.”

Claudio is a perfectionist and enjoys working alongside others that are too, sharing that some songs can go through a number of revisions until they feel complete. “The people that I work with, who I love, are very detail-oriented, and so we just go back and forth on our ideas. But for the most part, none of us like to waste each other’s time. So, we’re pretty quick with our decisions,” she says. Plus, Claudio is an artist who is sure of her vision. Therefore, she can tell early on if something is not worthy of making the album. “I almost know within the first five minutes of creating the song or the idea that we’re working on if I’ll either keep it or scrap it. If I’m not into it, we’ll never look back on it again,” she continues.

Having been putting out music for over six years now, Claudio admits she still gets “anxious” about doing so. “It’s just because of being signed and having to go through all of the whole processes of getting the timeline right, and getting the visuals before we can release anything. It’s just a long time before people actually hear the music that’s been finished for quite a while,” she says. “And then obviously there’s always that part of me, that’s hoping that people love it, but I’m so confident in the music that I make, that whatever the reaction is, I’m just proud to have created what I did.” 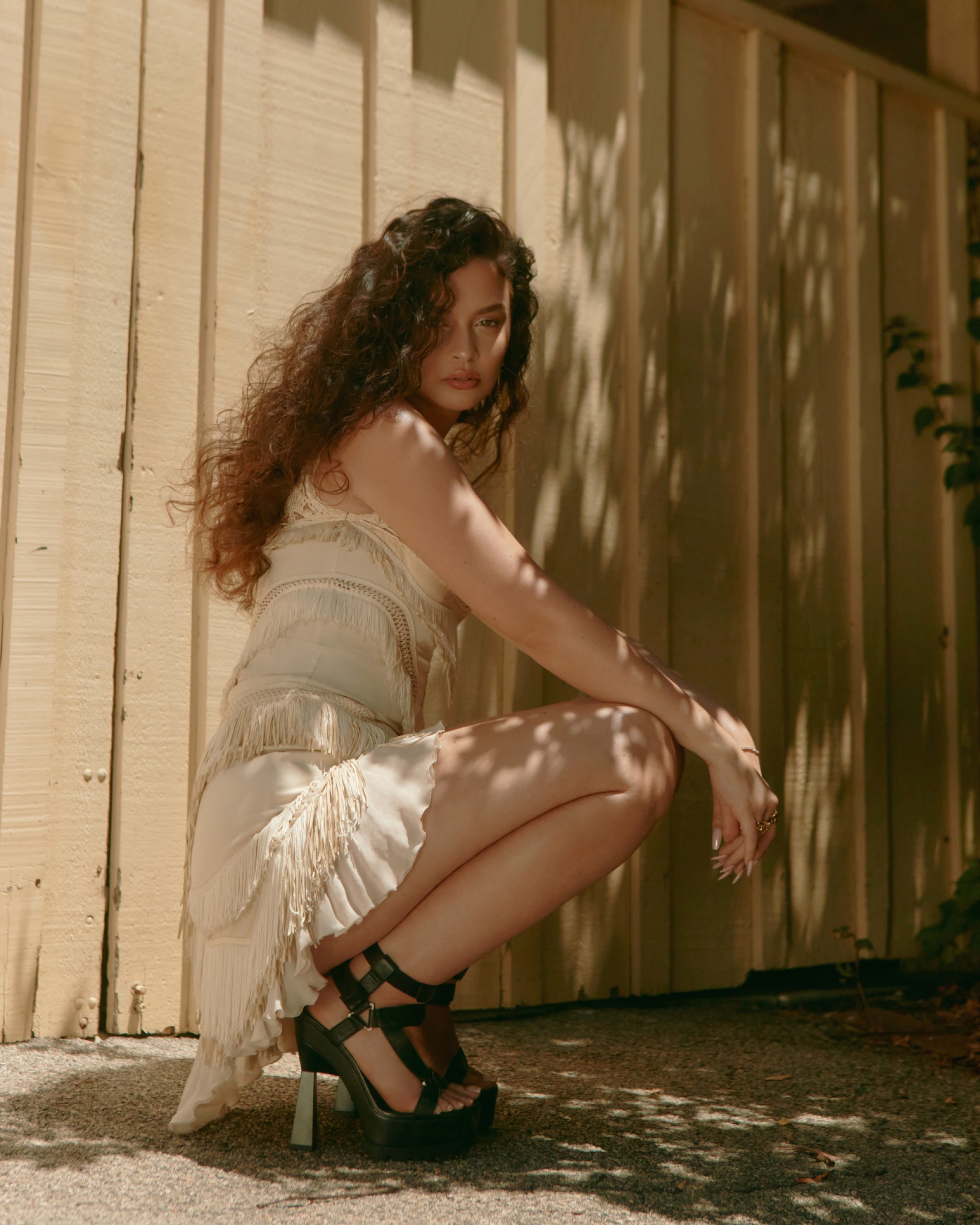 With that being said, Claudio couldn’t have gotten a better reception for Based on a Feeling. In fact, fans are even declaring it as her best work. “It’s been incredible,” she says about the response. “I haven’t really made music for about three years, so to have put it out and received such positive feedback from everyone has been super validating. It’s very exciting.”

The sultry “Put On Repeat” was chosen as the era’s first offering, setting the tone and mood both sonically and visually for what was to come. Among the 11 tracks on the record, Claudio insists it wasn’t a difficult decision to lead with that song. “It’s the catchiest of the songs within the album, that’s a given. Also, I thought that it was the most evolved off of the album in the sense that it just kind of shows different sides of me not only lyrically or melodically production-wise but the genre as well,” she says.

“Better Version,” the second single about the perspective of someone who chooses to remain in a toxic relationship, proved to be one of the most challenging to get finished, ultimately almost getting cut from the track list. “I think I was a little bit intimidated by the production as we were creating it,” Claudio admits. “And it was a challenge for me to write to something like that, and so I think that’s what made it difficult to create in order to get the structure right.” Because of the length the song took to get completed, Claudio almost gave in and scraped it. However, after getting it finalized, it became one of her top picks when playing it to her team and was selected to be released prior to dropping the album. 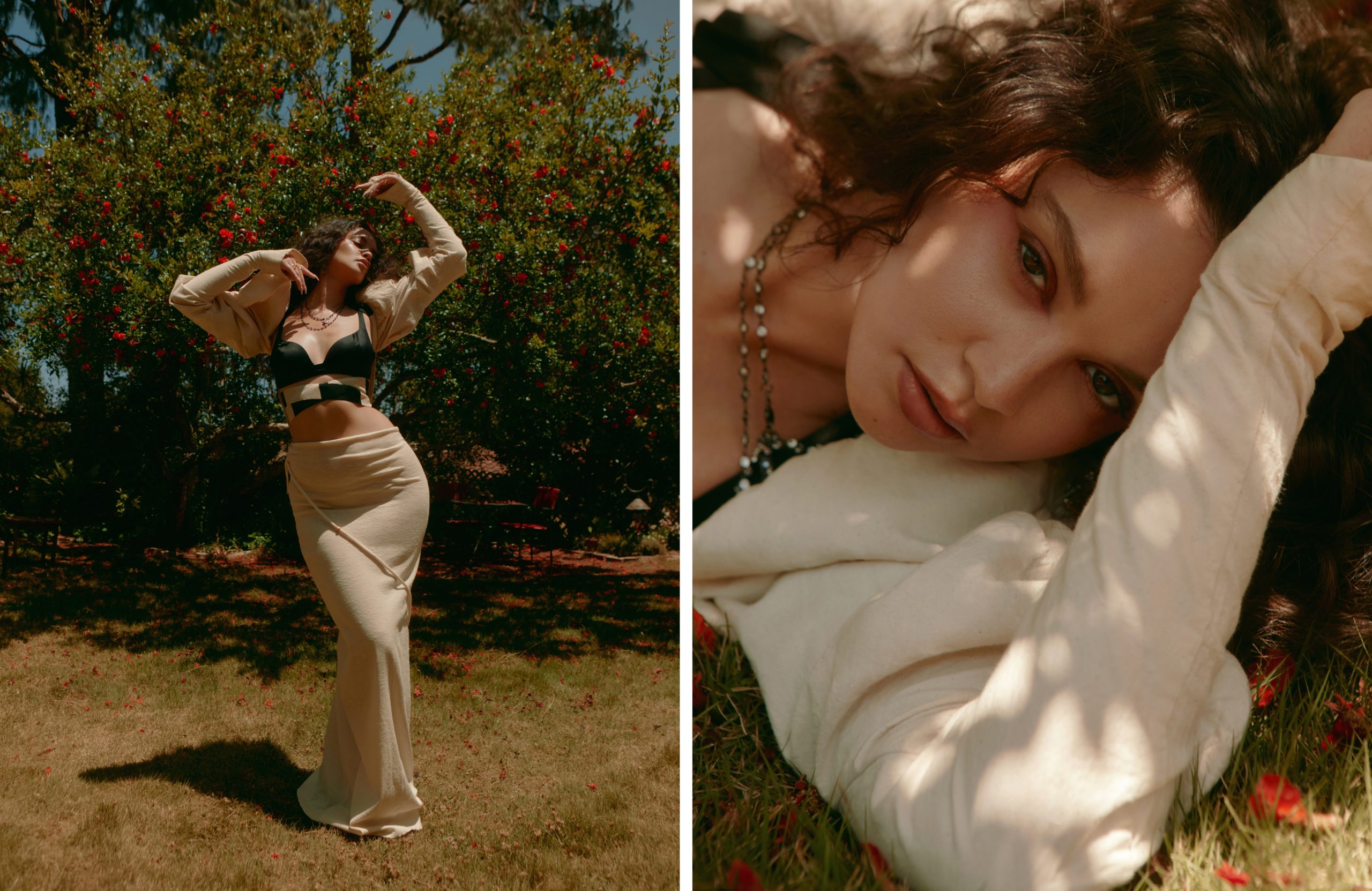 Claudio has been vocal about the artists who have influenced her the most, previously telling Teen Vogue she admired the likes of Usher, Lauryn Hill, and Alicia Keys growing up. Now that she’s an established artist in her own right, Claudio states she tries to stay away from listening to music when creating an album in order to avoid “having that bleed” into what she’s making. “I never go into my sessions with any references or anything. Not because  I’m not inspired by people and don’t admire people, but because I just want to make sure that what I’m creating is true to who I am,” she explains. In spite of that, Claudio does dish on who did catch her attention over the past year. “I am super obsessed with this band. They go by The Marías, I love them to death. I know them personally, but also I’m just a huge fan of their music,” she says, adding, “I was also listening to Olivia Rodrigo’s album last year  in and out. I’d say those two are the top artists. I mean, obviously, they’re not really new but they’re people that I’m super into right now.”

Claudio continues: “And of course, I’ll always just stick with the things that I grew up listening to. I’m kind of a creature of habit and I’ll just listen to the same 2000s R&B/soul artists that I just listened to all my life.” 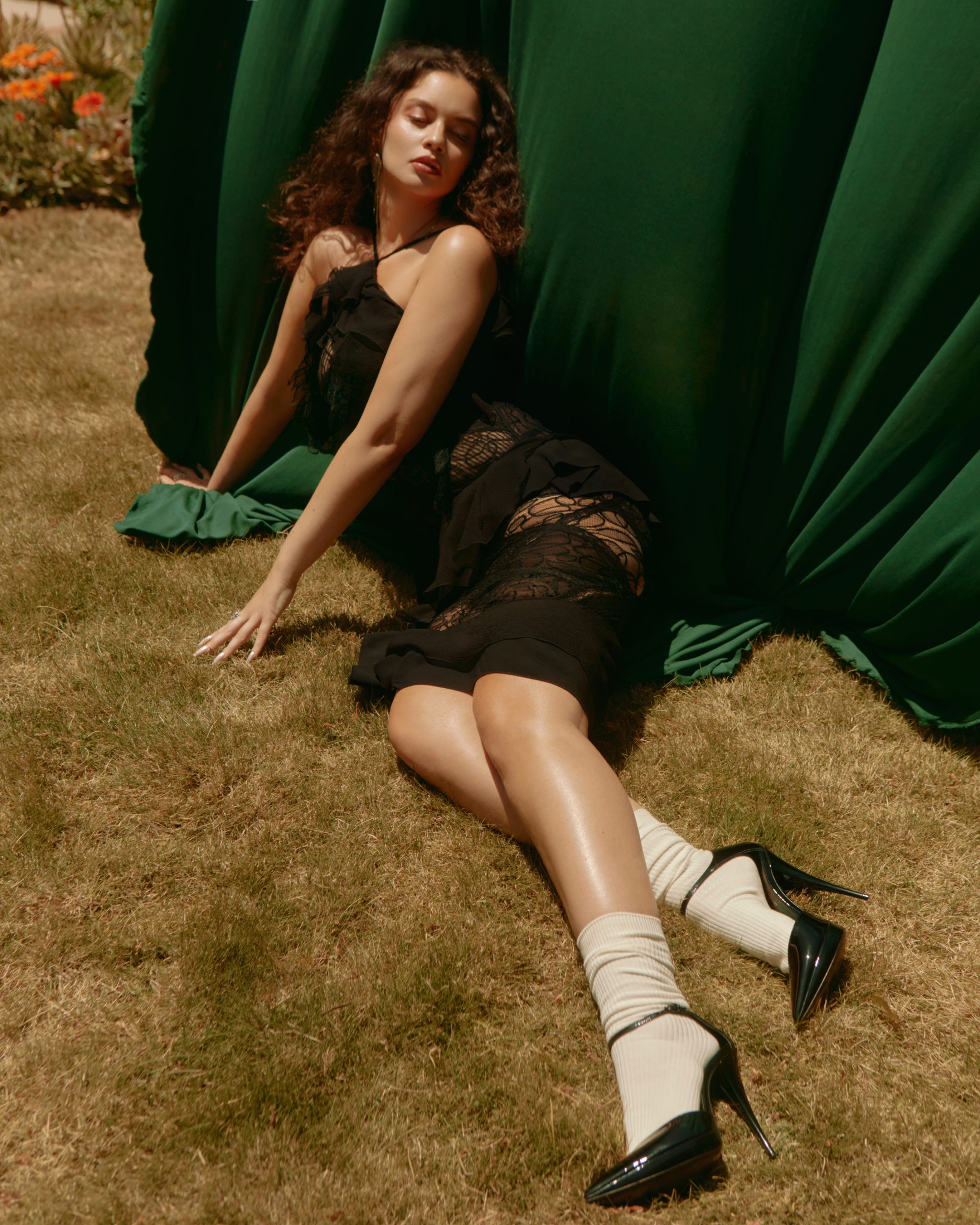 Collaborations with big names are something Claudio has been able to secure numerous times throughout her career. We’re talking Khalid, 6lack, A$AP Rocky, and Zayn, to name a few. Her 2020 Christmas album, Christmas Blues, turned it up a notch and featured The Weeknd and Alicia Keys. While they weren’t able to be present in the studio with her due to the pandemic, Claudio reminisces how surreal it felt knowing they were going to be on an album of hers. “Alicia Keys called me, which was insane. I was a little shocked to hear her voice on the other line but we did talk, the same with Abel as well,” she says. “When I heard their versus when they sent them back, I was in complete shock. Honestly, I grew up listening to these artists, so to have them on a Christmas song was kind of strange, but in the best way possible.”

Based on a Feeling is Claudio’s first album since her 2018 debut, No Rain, No Flowers, to have no features involved. While this wasn’t a cautious decision made, it also wasn’t something she was thinking about when writing the record. “I just kind of went with the flow and I listened to what the music is telling me to do. For some reason this time, I just didn’t really hear anybody specifically,” Claudio explains. After living with the album for so long and it being officially out into the universe, she can now envision particular artists on certain songs, teasing a deluxe. 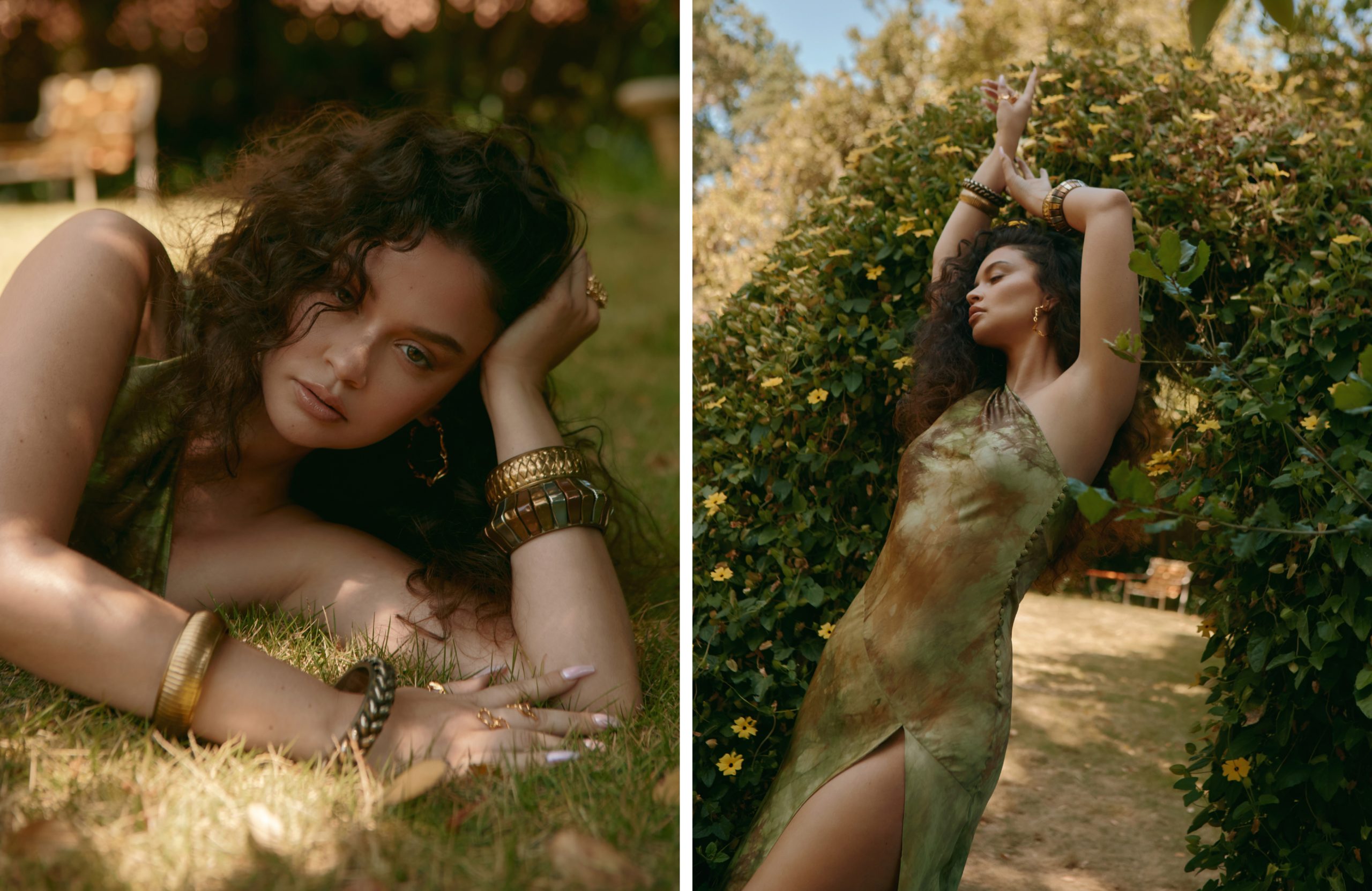 If there’s one that’s also noticeable on the new album, it’s the evolution of Claudio’s songwriting. Instead of writing about everyone else, she had no choice but to get personal this time around. “I definitely challenged myself. I wrote the album lyrically and melodically a hundred percent myself,” she says. “I normally don’t write based on personal experiences. With my other albums, I almost never did that, but because of the lack of interaction I was having with people throughout the pandemic for the past two years prior to writing the album, I really just had to depend on my own experiences, which was the biggest challenge for me overall, because I’m an extremely private person.” On the plus side, Claudio believes it has permitted her to grow as an artist and as a songwriter.

Claudio hopes those that have already delved into the album or plan to listen to it are “able to tell their story in a way that they aren’t able to,” adding, “I just hope that people connect to the music so that it can be something that helps them through the day through the three minutes that they’re listening to it.”

She concludes: “There’s nothing more than just for people to connect to it. I hope that it can spread to a good portion of the world. I just want my music to reach more people than it ever has before.”