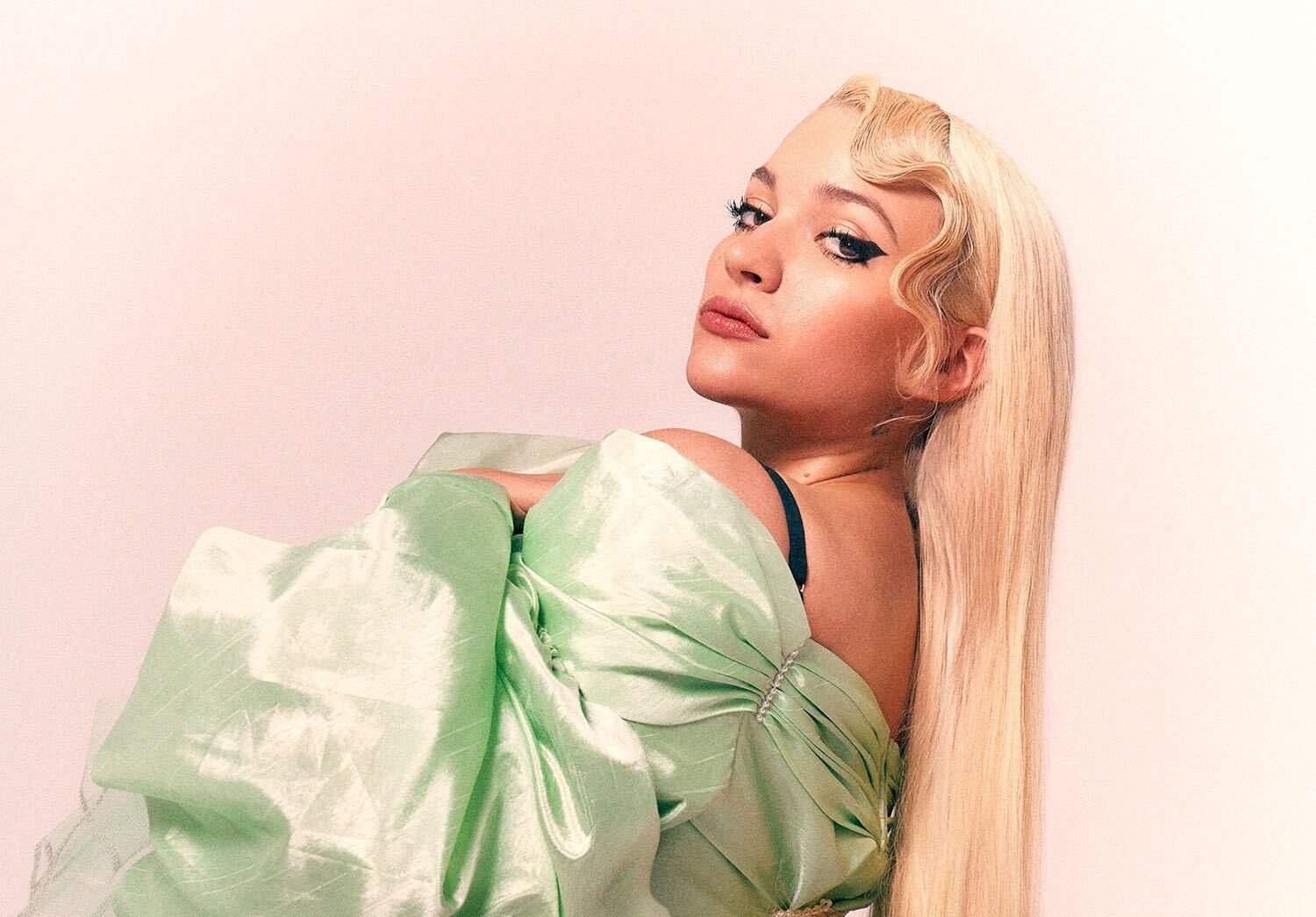 There’s just something about those Scandinavian pop stars and their ability to produce brilliant music, isn’t there?

Those with immaculate taste will already fuck with Swedish star Tove Styrke and be fully aware of her evolving back catalog of bangers. Four years ago, the singer released her playful, tasty third studio album, Sway, and has kept fans patiently waiting for another masterpiece ever since. Teasing a new era last June with the buzzy single “Mood Swings,” Styrke is back and arrives today with her long-awaited fourth record, Hard.

In addition to dropping songs from the album throughout the year, Styrke has been busy on the road, serving as Marina’s support act on her Ancient Dreams in a Modern Land Tour across North America and Europe. EUPHORIA. caught up with the singer in her dressing room during the second-to-last show in London, hours before she hit the stage to perform to a crowd of 4,900 at the city’s iconic O2 Brixton Academy. While doing her eyeliner in the mirror, I ask Stryke if she was ready to start our interview. Without any hesitation, she turns around, looks me in the eye, and tells me, “I was born ready.”

You’re coming to the end of the tour with Marina. What has this tour and performing the new music been like for you?

So great, it’s been crazy. People love “YouYouYou,” my latest single. I can tell that they don’t know the song by the name but when I start performing it, the chorus happens, and something about that song, it just feels like an instant classic. That one is so much fun to perform.

Do you get nervous performing to big crowds?

I don’t. I don’t ever get nervous. Sometimes I feel like I miss getting nervous for shows a little bit because it gives you that extra fire but it’s also nice not to be as you’re a little bit more in control on stage when you’re not like borderline blacking out.

Is it more nerve-wracking to perform to smaller crowds when you can see everyone or do you not mind either way?

No, I think everything is fun, even when shit goes wrong. That just excites me because it’s a challenge because you have to like prove yourself as if it’s a test.

Over the years, you performed in London many times. Is there anything about the city that stands out to you?

Crowds are always great here, I don’t know what it is…

You’re lucky because London is a tough crowd to please. We’re so spoilt!

Yeah, Stockholm is like that too. They’re not even like that spoiled with people coming there but when I saw Doja Cat in a basement, she had put out “Moo” and had started to blow up a little bit. People were like seriously standing there while she was working her ass off. She was so good and had a dance battle with like people coming up on the stage during “Moo.”

You’re about to put out your first album in four years, Hard. How are you feeling now it’s so close?

See, that is nerve-wracking for me, but also very exciting. I’ve been working on this album since 2019. It’s been growing and growing and getting better and better. And I feel like I’m so ready to have these songs out now and so excited to play them. I can’t wait to come back here and play my own headline shows because a lot of my fans didn’t get a chance to buy a ticket for Marina’s tour because it was already sold out. Luckily, it’s been a bit of a crossover as some of them already had tickets before I was announced. But yeah, I’m really excited to come back and tour all of the UK and Europe with this whole album.

You titled the album Hard. Did you get the inspiration to name it that from the song “Hardcore,” or is that separate?

The title Hard came before “Hardcore.” It means a bit of everything. It’s definitely got a little bit of that sexual connotation, but it’s also, life is hard, like people hard. It’s a lot about the contrast between the beauty, but the beauty in life is also the scariest, most dangerous thing. So it’s like a clash, a hard clash.

This is a bit of a geeky question, but why didn’t “Mood Swings” make the cut for the album?

That was just because it felt like to me that one had a personality of its own. It had its own aesthetic, and the style of production was its own thing. It’s not that it didn’t make the cut, I still love that song and perform it every night. I love it so much, but it just, like, didn’t feel right for the album.

You mentioned earlier that your latest single, “YouYouYou,” has been getting a great reception. Did you always have a gut feeling that one was special? Have you been saving it to release just before the album comes out?

I actually wrote that one later on. I thought I had most of the songs for the album and then like that one just happened and I was like, OK, there it is. Now, this album is pop, perfect! That one is the first on the tracklist, it’s the sunrise of this whole era and it sets the tone.

It was so hard! But, I loved just going in and learning choreography and really liked challenging myself and my body for that one.

I want to talk about some of the tracks on the album individually. I’ve picked my favorites. Let’s start with “Cool Me Down.”

That one was also finished later on in the creative process. I wrote that song with Oscar Scheller about a year ago or something and it didn’t sound like that. From the start, I knew it was a pop smash. I knew that it could be because this chorus, it hits, it goes hard, I just wanna dance to it. We were making different versions and everything and it wasn’t really like getting there. So, I sent it to this electronic producer in Sweden. I told them to do what they feel like doing. I got it back and I was like, that’s it. We decided to put “YouYouYou” out as a single before it was done and I was like, “Do we need to change what’s happening?”

I forgot about that one! I love “Lies.” That’s also one of the first ones that we made and I love it because to me that one feels very radio pop, when it’s good. That one also I thought was gonna age badly. Now, we are getting closer to the release date and it’s still made the cut. It’s still so good.

“24H” sounds like it has a slight garage production, that’s a genre we have here in the UK. I’m not sure if you’re familiar with it.

I’m not too familiar with it. I was thinking more about the Swedish band The Cardigans, their music, and that genre of music. I love guitar like in the chorus.

The last one I’ve picked is “Bruises.”

Oh, that’s my favorite. That has a guitar solo at the end that I love. To me, it sounds almost like Oasis in a good way. The album has “YouYouYou” opening and “Bruises” closing. It’s perfect.

How would you say your songwriting has evolved with this album?

I feel like I’m putting myself out there way more now. I used to always try to make everything so universal in the past. I still like to keep things quite universal but I’m not gonna be like, I woke up today, I ate this brand of cereal, and then I went to work and met my friend that’s named this. Like I’m never gonna be like that because it feels uninteresting. But, “Show Me, Love,” for instance, I wrote to my girlfriend when we started dating. I’ve never done that before, I’ve never been that person. With this album, there’s a lot more of me and my real honest, true experiences.

Is there a song that you’re most proud of? One that really stands out that you’re proud to have on the album?

Honestly, all the ones we’ve talked about, like “Bruises” I think is great. I really think that one is really, really good. I think “Millennial blues, I think the lyrics are really great too. That’s also an Oscar one and I think that describes a feeling that I think I and a lot of people my age sort of feel like they’re expected to be. We’re expected to be the next Beyonce. Nobody can and it’s such a shit setup.

We all grew up with this feeling of like the world is here, and you can be whatever you want. It’s just you and the amount of work you put in and no, it doesn’t work like that. People who are successful are either lucky or they’re mentally crazy, they are a psychopath. I think a lot of people in our generation feel like, oh, we failed, we could have done so much better. And we didn’t, it’s just hard. A lot of people are like finding it hard to just be content and expect a little bit less and just be happy. Like chill, live your life.

And collaborations, you’ve obviously done a few in your career, but I don’t think you’ve done any on your own album. Has that been a conscious decision?

I think collaborations are important when the music benefits from them. If I would’ve gotten the perfect fit for a song on this album, if that would’ve lined up, I would’ve done it. However, I will never put somebody on a song just because it’s a good name. There’s a lot of that. Just let the PR be PR and let the art feed the art.

I hope they feel empowered. That’s the way I feel when I listen to a great pop song, when the music feels like a friend. It makes you feel better about yourself and more comfortable with yourself and your experience.

What’s next then? You’ve mentioned your own tour. Are there more videos we can expect?

Yeah, definitely. I’m going to be touring the shit out of this. I have some more music lined up actually [laughs]. I have at least one more song that I’m going to put out, it could be an add-on but it could be the start of the next thing. I haven’t quite decided yet because the sound is a little bit different than this album.