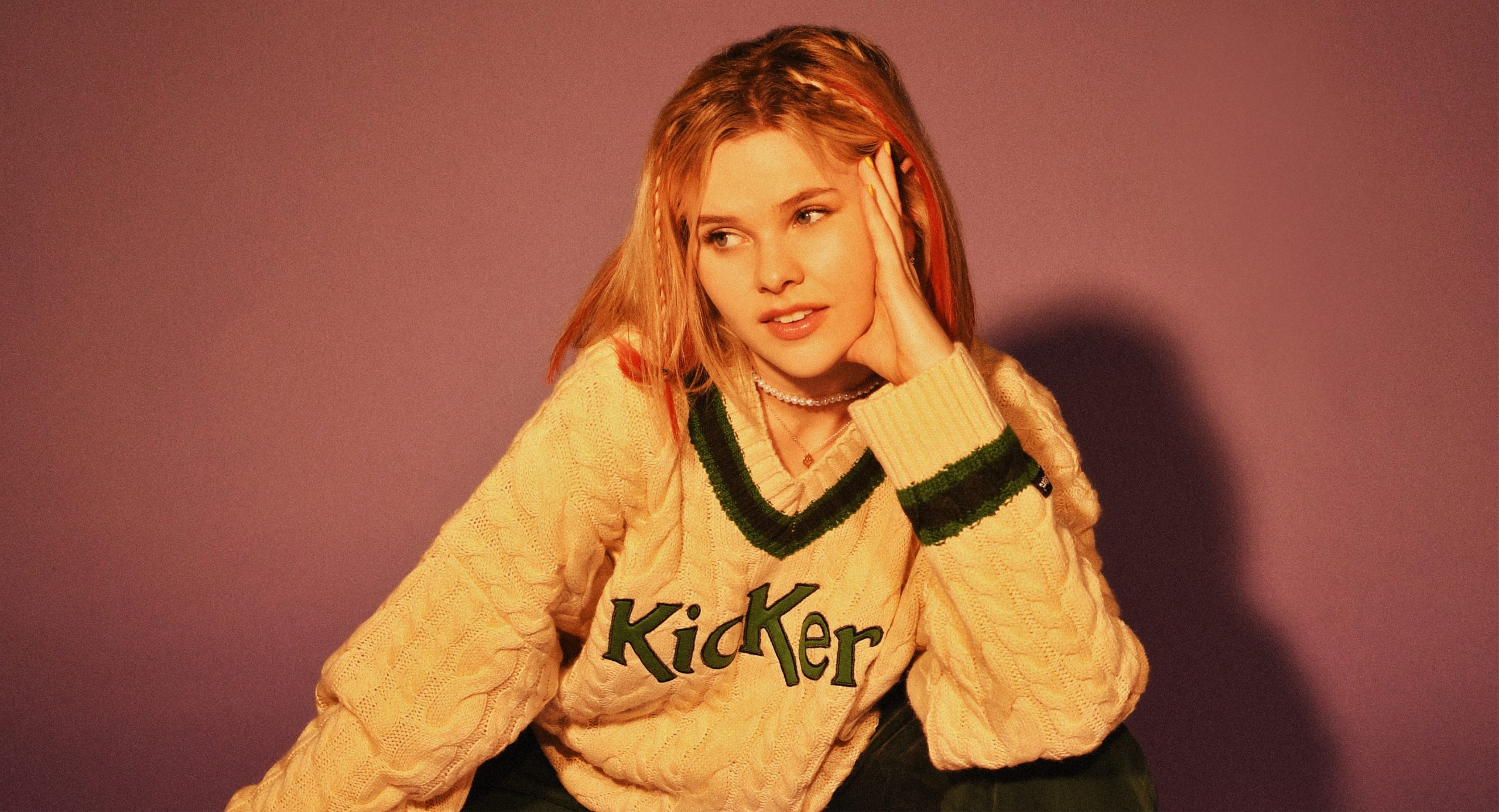 Hedda Mae is putting the fun back into pop in the best way possible: without shame! Hailing all the way from Norway, this young powerhouse is yet another Scandi singer we are obsessing with.

With the idea of putting out a trilogy of EPs, Mae is now two-thirds into the campaign, delivering Introducing: Hedda Mae and The Early Struggles of a Late Millennial over the past two years. While fans patiently wait for the third installment, which is due in the coming months, Mae has arrived with her latest single, “Another Stranger.” In a discussion with EUPHORIA., she shares all about the new track, upcoming material, what it’s been like performing shows for the first time, and her obsession with the golden late ‘90s/early 2000s era. 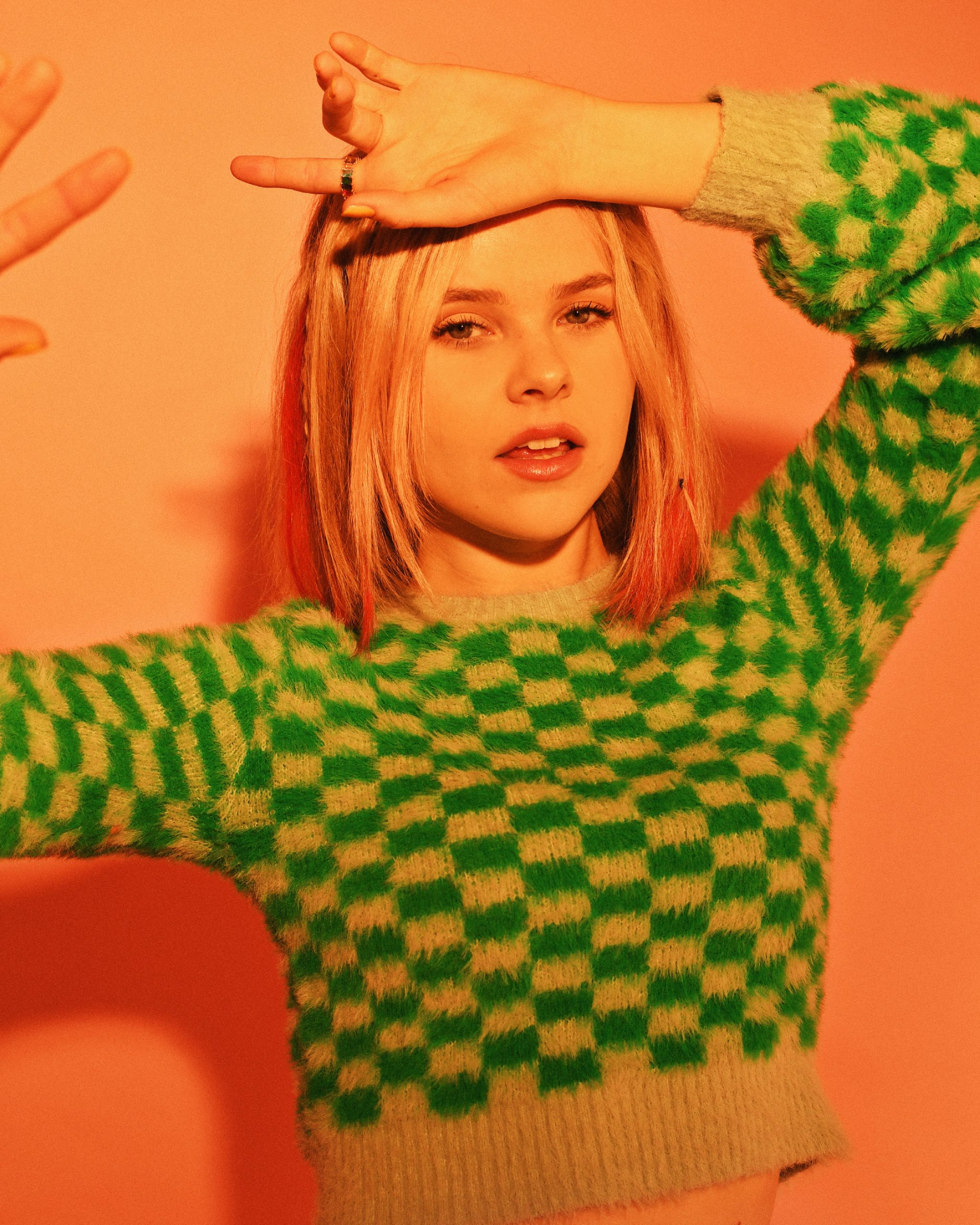 Your new single, “Another Stranger,” is quite the anthem! Tell us about it and what inspired you to write this song?

Thank you so much! I wrote “Another Stranger” about three years ago, and it’s nerve-racking to release the track after all this time. However, it’s a song I still relate to today, and it feels right to release it now. There are so many things I wish I knew when I grew up, and how relationships come and go is one of them. You know how you promised half the school that you’d be best friends forever, but then reality hits and you grow apart? It’s weird because when you spot someone you used to know in public now, you get reminded that you don’t really know anything about that person anymore. And maybe you don’t want to know either. I wrote “Another Stranger” after seeing an old friend at the mall, and I realized I’d rather go hide than go catch up. I never thought that this person would end up becoming someone I don’t want to run into. Life is messed up like that.

Recently you did your first-ever live shows in Denmark. How did people respond to your music in a live setting?

The show in Denmark is actually one of my favorite shows I’ve ever done. Given that it was one of my first gigs outside Norway, I was really surprised by how many people showed up — and how many sang along with me. It was like this one big party. I hope I can go back very soon! Roskilde, please book me??

You also performed at The Great Escape in Brighton, where lots of new artists play every year. How was that experience?

It was kind of overwhelming, to be honest. I’ve dreamt about playing at The Great Escape for so long, and everything went by really fast. However, that’s how I feel about music industry festivals in general — it’s hard to keep up with everything that’s going on. But I’m pleased with the shows we did, and it was super inspiring getting to see some of the other acts at the festival. And I gotta say, Brighton is now one of my favorite cities ever. Everybody was so kind — it kind of sucked to go back to Norway, because no one calls me darling there. 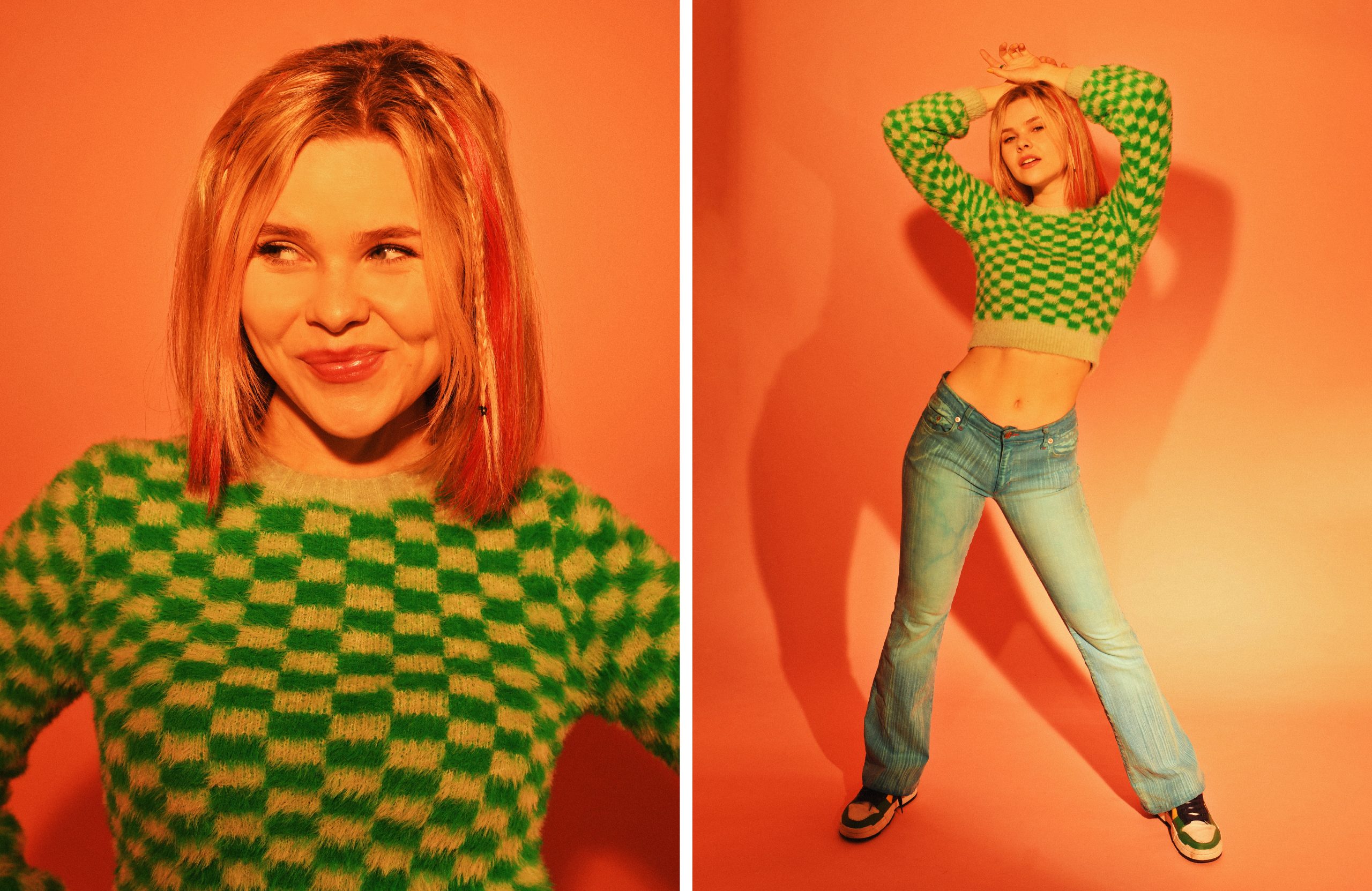 Your music and overall aesthetic pays homage to the late ‘90s and early 2000s. What is it about that era you admire the most?

First of all, I’m super fascinated by the toplines from that time period. Everything seems so smart and well put together. When I wrote my last EP, The Early Struggles of a Late Millennial, my vision was to try to recreate some of the ’00s toplines and put it in a more modern soundscape. Also, I can’t talk about that era without mentioning the music videos. There are so many good ones!  Last year I actually made a ’00/’90s homage music video to my single “Take it or leave it,” where I recreated several iconic videos from back then.

Who were your musical heroes growing up in Norway?

In Norway we had a thing called Hits For Kids, a yearly CD compilation series filled with up-to-date hits from both Norwegian and international artists. I probably looked up to every single one of the artists on those CDs. As I grew up, I also remember Lisa Børud (Norwegian child star) being one of my big musical heroes. Other than that, I gotta say that most of my musical heroes mainly have been from outside of Norway, like Britney Spears and Madonna.

How old were you when you realized music was your calling and something you wanted to take up professionally?

I’ve always wanted to do something related to music, but it wasn’t until I got into songwriting I knew that I wanted to do it for a living. It kind of put a meaning to it all. I was 18-19 then, and I haven’t looked back ever since. But I’ll admit I was kind of late to the party. 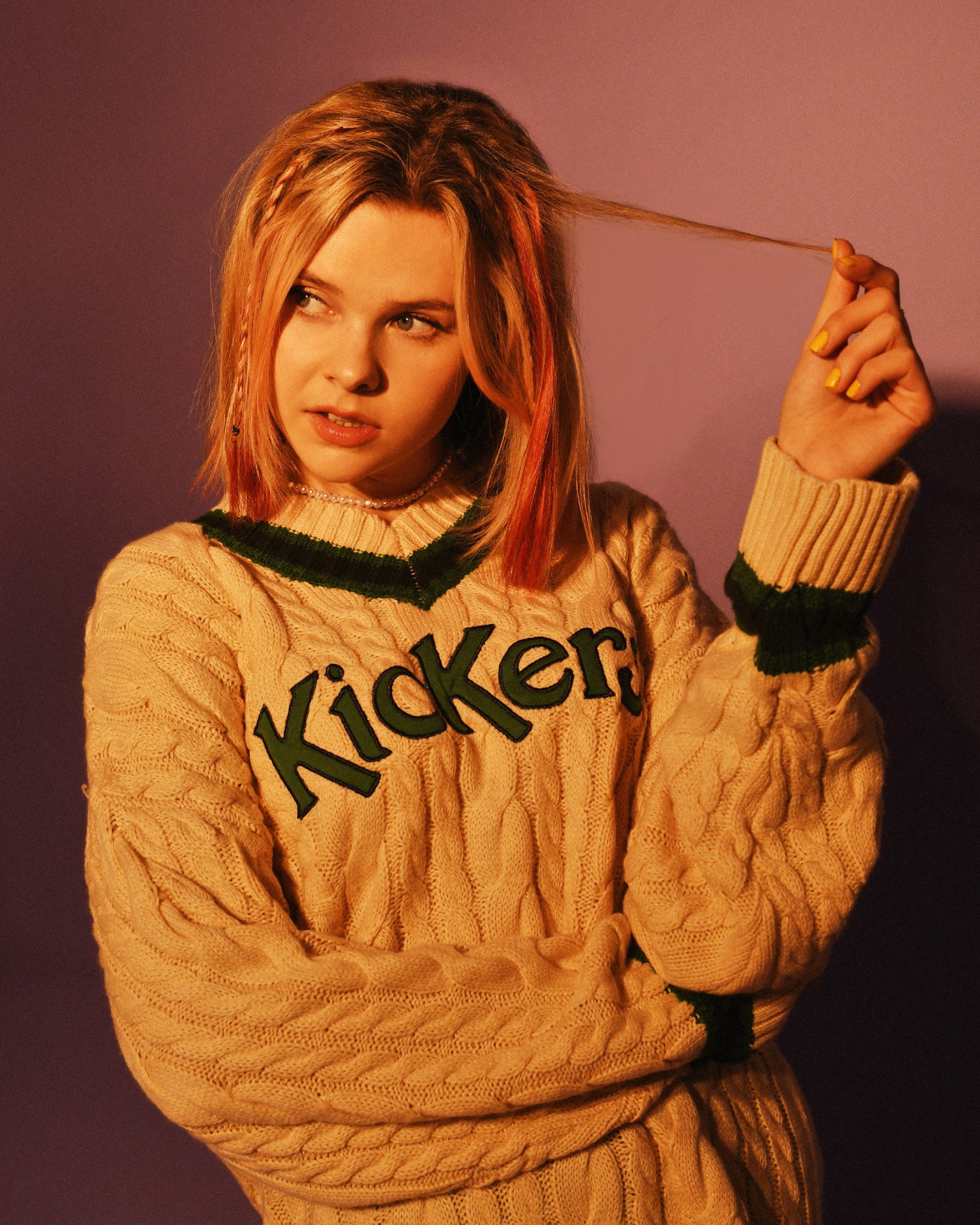 Was there anyone who influenced you to do it as a job?

It was my vocal coach at the time who introduced me to songwriting, so she definitely played an important part in it all. Other than that, I really don’t know how I ended up doing music full time, even though there has been a lot of music-related joy in my family, I’m the only one that does it for a living.

How does your new EP different from the previous two we’ve heard?

I would say the songs on it are more uptempo than what I’ve done earlier. It’s definitely an EP meant for good times and dancing, and some of the songs might be considered more approachable than my previous ones. I’m not gonna lie, this EP contains some of my favorite songs I’ve ever written.

How and why did you come up with the idea to release a trilogy of EPs?

I kinda have the pandemic to thank for that. I released my first single in this project just before it hit in 2020, and all the shows we were supposed to play, both in and outside of Norway, were either canceled or postponed. Since I wasn’t able to show people my music by playing it live, I figured the best way to give people a proper introduction to my project would be by continuing with releasing songs. A lot of songs. That’s how we came up with the trilogy idea. By then I had already experimented a lot with my sound, and I wanted each EP to be completely different, both visually and sound-wise. Since the songs are so different, it was also a good way for me to be able to release them all without it being perceived as too chaotic. Still, I feel like the nostalgia and the retro-ness binds it all together. 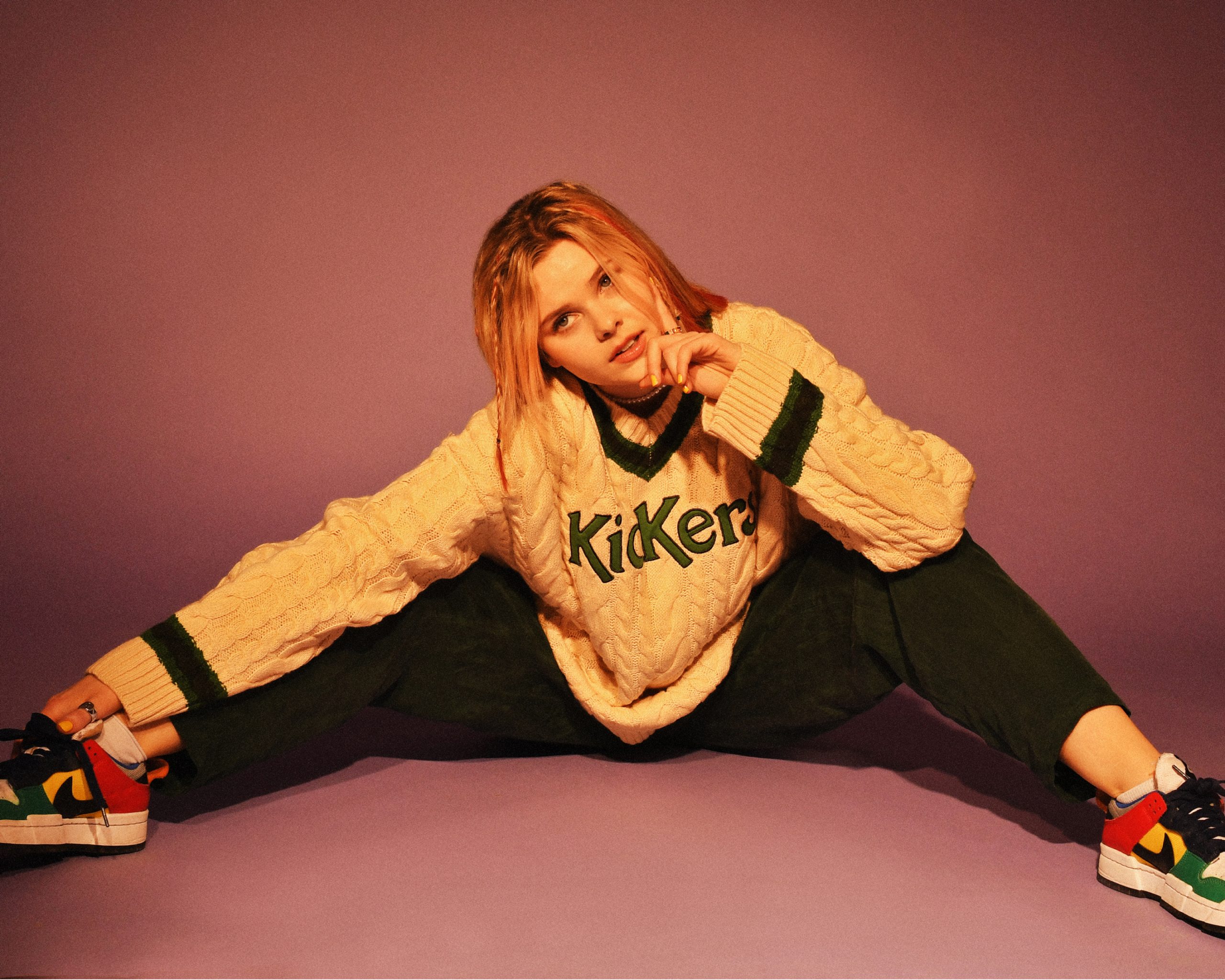 If you had to describe your upcoming in EP in colors, what would they be and why?

Oh, I like that question! Probably yellow and purple. In your face and edgy, but still a hint of an early-age/young vulnerability.

You’ve said you’re open to collaborating with artists. Who is on your wish list?

I think Blæst and Beharie are super cool! It might not come as a surprise, but Anderson .Paak and Bruno Mars are also pretty high on that list.

What is a goal you want to achieve before the end of the year?

These last two years have been absolutely crazy, and I’m just super thankful that we can live like normal again. The past few months I’ve finally gotten to do a lot of the things we originally planned two years ago, and I’m super excited about what’s to come. You know what, scratch everything I said. Getting to tour with my soon-to-be-released EP-trilogy would be dope. 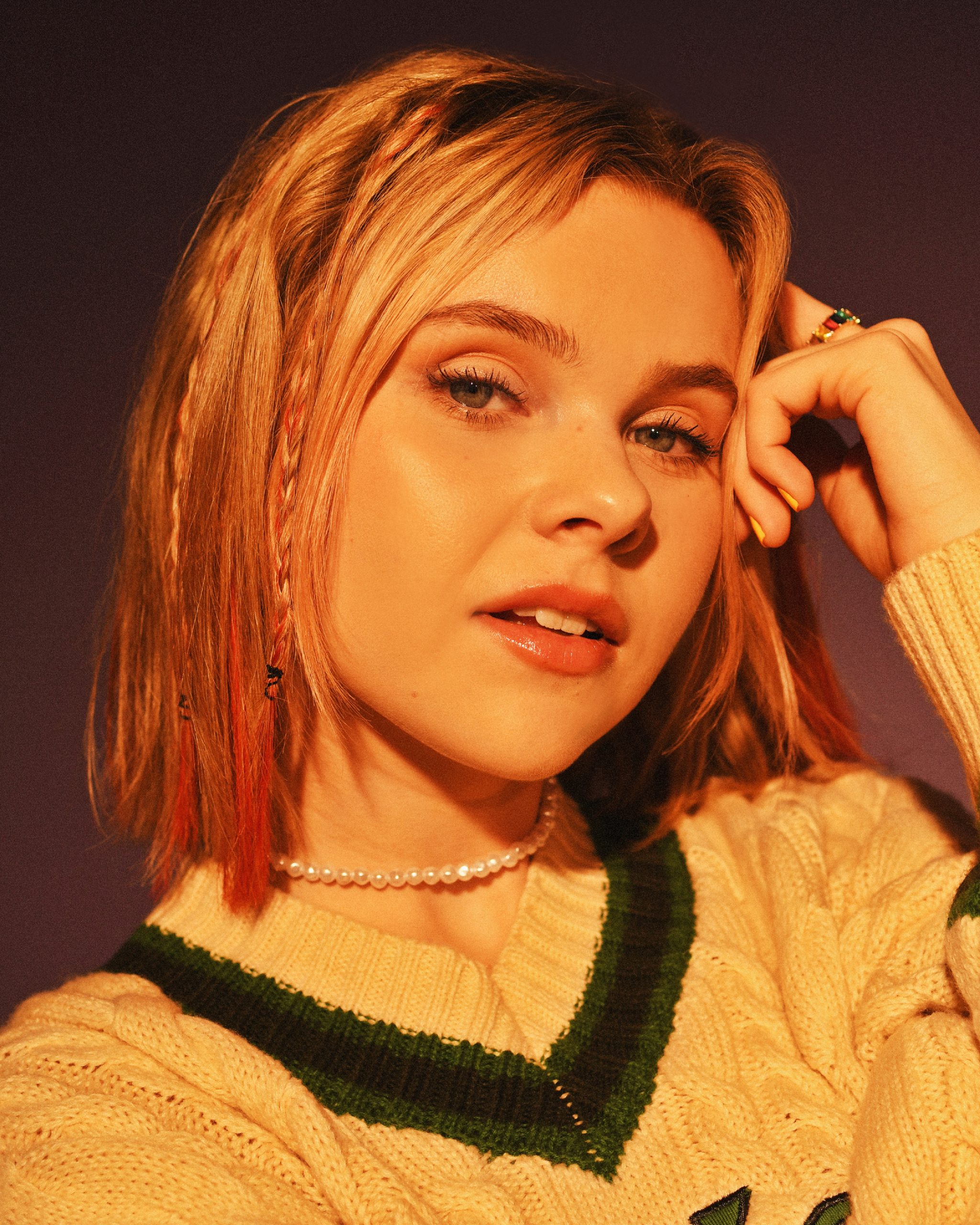