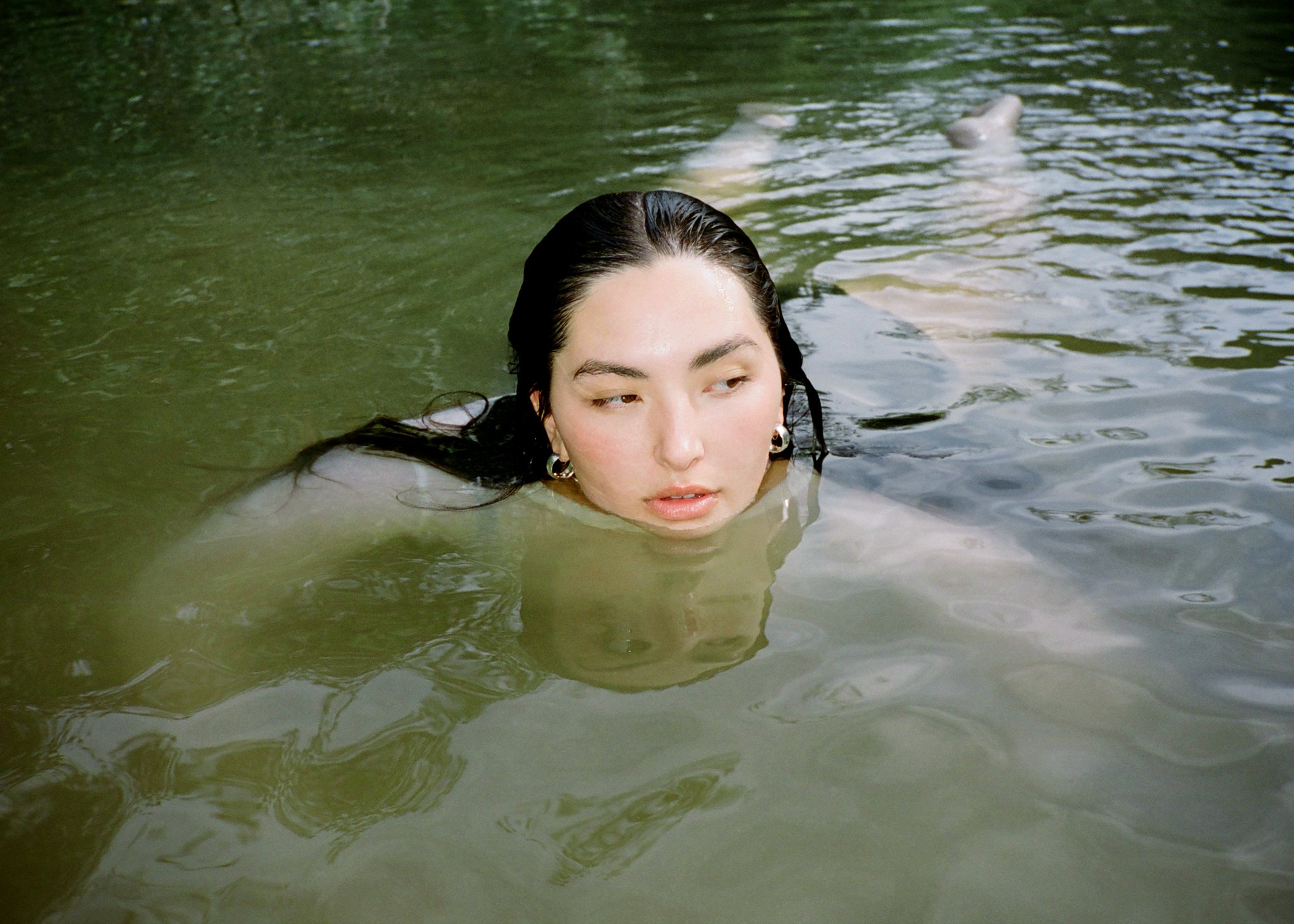 While as a model, Nu’s style is vibrant, striking, fiercely captivating, her style of R&B feels like a smooth-sailing journey of all the right cadences. As an opening track, “Bouquet” has a strong kicking rhythm and a natural seductive appeal. Nu’s harmony feels woven with the various percussion and the quiet piano keys that signify a serene night. Her confidence certainly shines through the snarky lyrics announcing love and ownerships of both her lover and herself, all of it compiled beautifully and cohesively.

The poetic nature of her songwriting shines in the EP’s second track, “Sin.” “Said you, have a cure / But you don’t know a thing about me / Always, keeping score / Part time perfect version of me,” she sings in the chorus. But there is nothing vague about her lyricism. A recurring topic through the entire project, she deliberately comments on the tug-and-pull between individualism and the search for perfection, demanded by both herself and others.

Nu’s R&B-centric vocal is prominent, upfront, and perfectly accentuated by a surprising anti-pop aesthetic. Through the electrified production and her unorthodox, rhythmic songwriting, there’s almost a detectable pulse to her songs. “Sandcastles” opens with an ascending, theatrical intro that compliments the floating-water melody in an ever so nicely fashion. While each track on the EP has its own essential role, “Sandcastles” is an absolute stellar highlight with an even more glamorous music video.

She certainly had an ambitious project in mind and many things on agenda — and somehow it worked. Nu skillfully follows the dreamy, introspective “Gully” with an energetic, snarky banger that is “Illusions.” Toward the end of the EP, these two tracks sharply contrast each other as one reminisces over traditional Asian musical elements while the other fuses R&B with electronic and alternative pop.

There is no doubt that she will be just as much of a heartthrob in the music world as she has been with her modeling career.

I’d love to know a little bit more about you as a person. What’s it like to be both a model and a musician at the same time? How do you maneuver that crossover?

Hello, my name is Yumi Nu. I became a model when I was 12 year old and similarly around that time, I started taking voice lessons. There have been times when one outshines the other and my time devoted to both of those things has fluctuated depending on whatever is more demanding at the time. But I feel like now I’m finally at a place where both of them are taking up the same amount of time. When I have time off for modeling, I’m in sessions, writing songs, doing creative [direction] for my EP and future projects, also working on a plus sized clothing line here in Brooklyn.

Who are some of your musical influences? How did you come about to choosing what kind of sound you personally want to have?

I feel like my musical influences change so often because music has become very single-based and less album-based. My earliest memory of different genres was from my dad, because he would always play a mix of R&B and dance music; then my mom played The Smashing Pumpkins and U2, so I had this blend of influence from both sides. I enjoyed The Goo Goo Dolls, but I also really enjoyed Sade. I think as genres have become less confining in our modern day age as artists, there’s more room for us to blend different sounds and create something that feels right for us. Right now — I’ve always been very influenced by Banks and a British artist named Sam Gellaitry, he’s really really cool. I also have a decent amount of cool artist friends in my circle that I’m just always influenced by. When you’re creatively surrounded by a good group of people, I think I take inspiration from everything in a way.

“Pots and Pans” didn’t really have a music video but it had the visualizer. There’s this theme of independence, but also the search for it, something about while there are certain necessities in life, there are also different balances. So tell me about that song and the visualizer, if you can.

I’m excited that you asked about this because I think it has to be explained for people, it’s a little bit hard to get it. But basically, I was inspired by Ikea furniture guides. I just moved into my previous home and my boyfriend was putting together my dresser. I was just looking at it (the furniture guide) and I was like, this is cool! I wonder how it could translate to my song. “Pots and Pans” is written from the perspective of my old roommate, who stayed with us after a breakup. She didn’t have any furniture, she just had a suitcase. She was sleeping on the floor while waiting for her bed frame and all the other furniture — just like how she’s slowly putting her new life together. I wrote it from her perspective of starting over and starting from scratch, rebuilding her life. So I thought it would be cool to do an assembly guide of rebuilding yourself after a breakup and what you would need [for the video]. I also did a small batch of shirts with the assembly guide on it.

I want to talk about “Sandcastle,” which has a beautiful and serene music video. Is there a theme of searching and returning to your Asian identity and your root? The arrangement of “Gully” and its instrumentation also feels less American R&B but more traditionally Asian. Is that a big theme for this project?

So the name of the EP is Hajime, which means “beginning” in Japanese. My grandma wrote a memoir and the first chapter of it was called “Hajime.” I don’t know, I just love it. To have a Japanese word that is very symbolic to this project meant a lot for me, because I have gone through so much healing and processing and acceptance of my own Asian identity. I feel, along with so many other Asian Americans in the past few years, we’ve all noticed how the world is making a little bit more space for us, and it hasn’t always been something that was welcomed or encouraged except for ourselves. In this project I wrote about searching for yourself in general, from the inside and out, feeling and finding my own worthiness and relationships in life, trusting myself and my instincts, and just feeling over all grounded. I mean, I’m 25, and I feel like I’ve gotten to this place of maturity in my life where I’m really trusting myself. This EP was the beginning of that.

I feel that as a general public figure, sometimes we have to package ourselves in a way that is friendly to the outside world, but this (music) is kind of like some of the uglier, crunchy corners of my soul that I wouldn’t necessarily share directly with people. I think that’s what is powerful about music, but it’s also really painful at times. As much as I want to say rejection doesn’t affect me, it affects me so much more with music, because it’s me packaged in a song. It’s an extension of yourself in a different format.

What’s it like to suddenly feel a lot more vulnerable when it comes to being a creative, and suddenly there’s a lot more personal details that will be shared and discussed with this upcoming project?

I feel excited, actually, especially with my modeling career that took off the past year, too. I felt that people don’t know me as much as I want them to know me, and I always cherish the very vulnerable relationship to the outside world. So I feel excited that people finally get to see me in a more intimate light that they haven’t before.

What are some goals that you hope to achieve with this project?

Honestly, just for people to hear it. At the end of the day, I’m fulfilled when I’m connecting with people who feel connected to the music. That will always be my goal with everything I do.