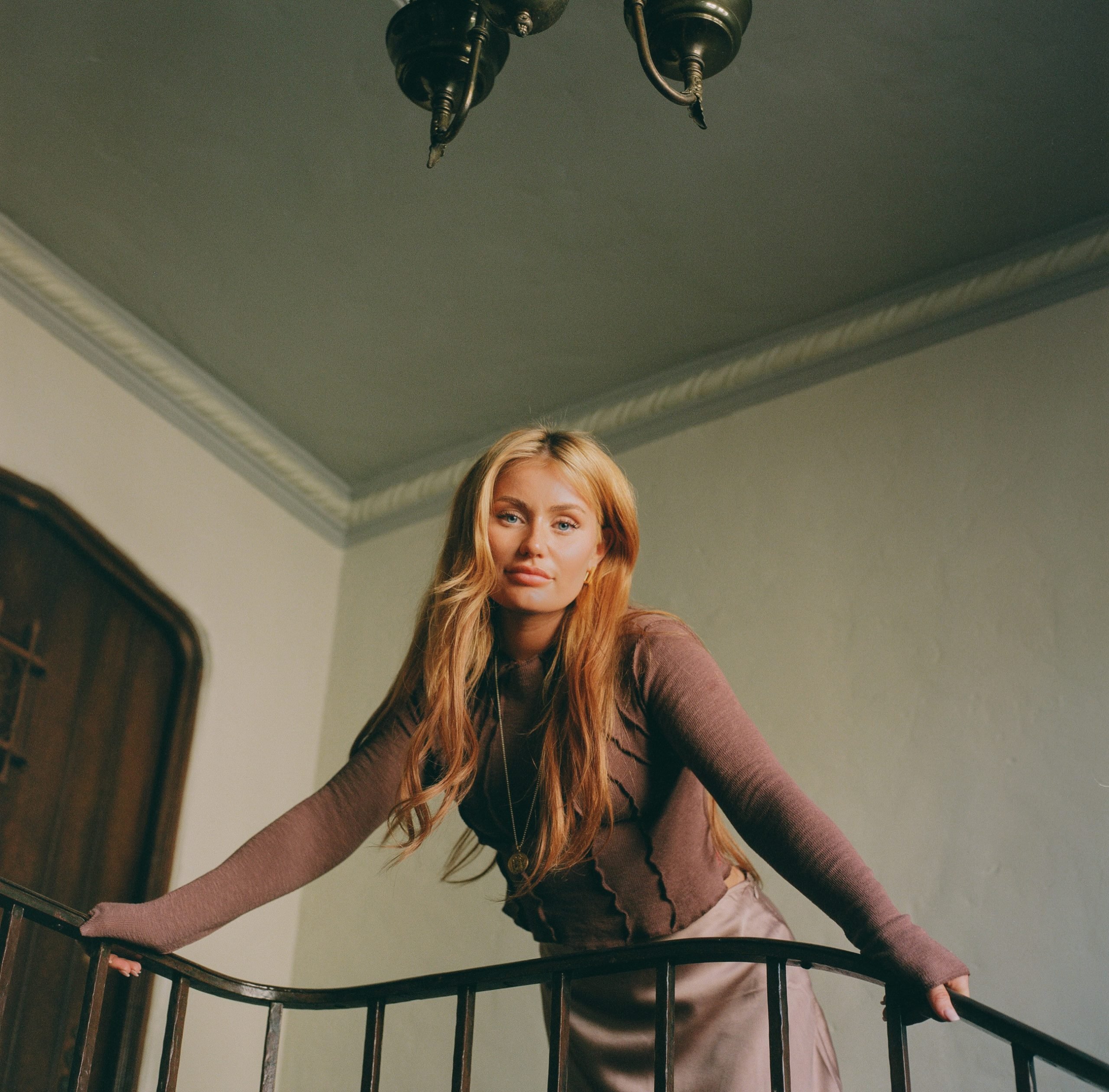 For Eloise Alterman, heartbreak is the painfully cathartic catalyst necessary for rebirth. The shell of who she once was, the Detriot native takes to bittersweet lyrics and full-bodied vocals to pick up the pieces of a now shattered romance. Eager to share her testament to revival in a six-song collective, the songstress offers listeners a small piece of her heart with her latest EP Sad Bird. In a bout of musical liberation, suddenly loneliness has never felt so good.

Like a light switch, Alterman quickly realized the debilitating nature of isolation at the hands of a former lover. “How can that happen overnight?” she inquires. “I had written for years about many different things, but then around 2020 my heart had been broken. The EP isn’t really about what that person did, it’s more about how I fell apart. My songwriting became very, very broken. [The song] ‘Seasons’ is almost me hoping that I stopped feeling like that. I do still feel it, but there’s a glimmer of hope. I wanted to share the stages of losing yourself and of being confused. I don’t have my shit together whatsoever at all — we pretend like we do, and that’s what [the track] ‘Sad Bird Still Sings’ is about. I think the EP will give people a place to openly feel those feelings about being lost and really, really sad and lonely. The songs are very all over the place. I’m missing someone. I’m hating someone. I’m mad at them. But I’m in love with them still, and I’m confused. It’s crazy feelings but it’s normal.”

Given vulnerability and sensitivity at the epicenter of her written works, Alterman communicates a fiercely deep message against cool-girl California sound. With touches from Grammy-winning producer Dave Cobb, Sad Bird is music to dance to as easy as it is to cry to. A chronicle of emotionally evocative anthems, listeners will feel Alterman’s soul woven into every melody. “I come from a family where no one really articulates how they feel, they just get angry or sad or they get upset,” she says. “I’ve always been the biggest feeler and I’m sure I annoyed them all the time!” Better yet, it’s this same feeling of intense passion that saturates the EP with warmth and peace.

Despite its lyrical material largely rooted in recovering from sadness, anger, and heartache, Sad Bird is an inexplicable depiction of creating beauty out of madness. For the singer, stepping out of her comfort zone by penning her darkest thoughts means she “learned to be really honest,” she says. “This is my therapy, and I continue to use writing as therapy instead of trying to create something that [doesn’t] sound like doing justice to myself.”

Curating the EP’s authentic sonic experience is an amalgamation of decades-long melodic memories. From childhood moments spent on karaoke machines to young adult years pursuing a songwriting career in Nashville, Alterman established herself as full scale musical devotee fated for success early on. With a singing craze prevalent from age 9, the artist-to-be was a match waiting to be ignited. “My mom was like, ‘OK, if you actually really love this, you need to learn how to play an instrument. You can’t just sing karaoke all the time,’ probably because she wanted to smash the karaoke machine all day long,” she says through a smile.

Alterman recalls toying with a loaner guitar; a decision that would forever bind her to a future as a musician. When asked to learn five songs before earning an instrument of her own as a birthday gift, she promptly completed the task and enrolled in lessons thereafter.  “On the first day, the instructor wanted me to play songs that I didn’t know. I was like, ‘I want to play “White Horse” by Taylor Swift and you’re not letting me! Yeah, fired,’ Alterman jokes. “I started teaching myself, and within a week I was playing the entire Fearless album.”

Her relationship with the guitar was magnetic, and piano soon followed. “With karaoke, you can only sing the songs that they make the CDs for; but with a guitar, you can play any song that you want,” she says. “As a music dork, it was just so exciting. I could learn any song I wanted if I put my mind to it, and that’s what got me doing it every single day. I never felt forced.”

Alterman polished her songwriting genius following years of studying the tender nuances of personal narratives. “There’s an aspect of storytelling that I really love in a song,” she shares. “I grew up listening to a lot of ’70s classic rock and ’70s songwriters. There was so much storytelling, and the music wasn’t swallowing those songs whole — it really was the vocal in front.” Channeling the likes of Norah Jones, The Lumineers, and Mumford and Sons, the rising starlet attributes authenticity to be the crux of her craft. “I love so many different kinds of artists, and they’re all just songwriters. They’re all telling a really personal story. They have really beautiful voices and I think it’s because you can really hear them.”

Newly poised to challenge her abilities on a worldwide platform, Sad Bird posits itself as chapter one of Alterman’s tale as a spry superstar of her own accord — and listeners are taking note. After sharing a snippet of the EP’s lead single “Her” on TikTok, she earned her first taste of viral success. “When I put that out, I was obviously not expecting it to go viral. And honestly, it was such a boost of confidence because it’s nerve-wracking putting out music! And all of a sudden, all these people are like, ‘I needed this. I’m going to be belting this in my car.’ I was so genuinely happy because it makes you realize we’re all going through it together — and I’m not even through it. I’m still upset. And these people are upset too, so let’s be upset together.”

Haunting and ardent, “Her” is a booming tune of rich vocals as resonant beats. The track comes alongside a seaside music video well-suiting to the artist’s beachy keen spirit. Singing “When I kiss your lips I taste her / When I touch your skin I feel her / In between us in the sheets / You’re with her when you’re with me,” Alterman purges herself of a woeful relationship in ocean waters, stripping her back to a newfound journey of self-renewal.

The widespread takeover of the hit is an overwhelming swell of positive affirmation; a true representation of her powerful out-of-the-box writing expertise ushering in the poignant ambiance of Sad Bird. Equipped to share her story, the EP’s release is a reminder that passion will perpetually outweigh the fear. “I was really lucky because my parents were really supportive. In their defense, they also watched me do it from the time I was really young, every single day. But if there’s something that you’re very passionate about that you need in your life, then you’re going to succeed in it. If you love it, and you want to get better, then do it. There isn’t a better time than the present, and I’m such a believer in doing things that make you happy. And that’s honestly why I did music.”

A paramount step in discography from her 2021 debut EP The Other Side, Sad Bird sets the precedent for Alterman’s poetic, prodigious career. Since hearing the project in its entirety, her lyrics prove that moving against a tumultuous romance doesn’t mean forgetting the past, but rather allowing yourself the space to weep, grieve, and breathe new life into tomorrow. All the same, Alterman asserts that in spite of a few tears shed, Sad Bird is still like “a spicy mezcal margarita.” Raw, full of flavor, and packed with a sting — just how we want it.

Sad Bird is available everywhere on all platforms.