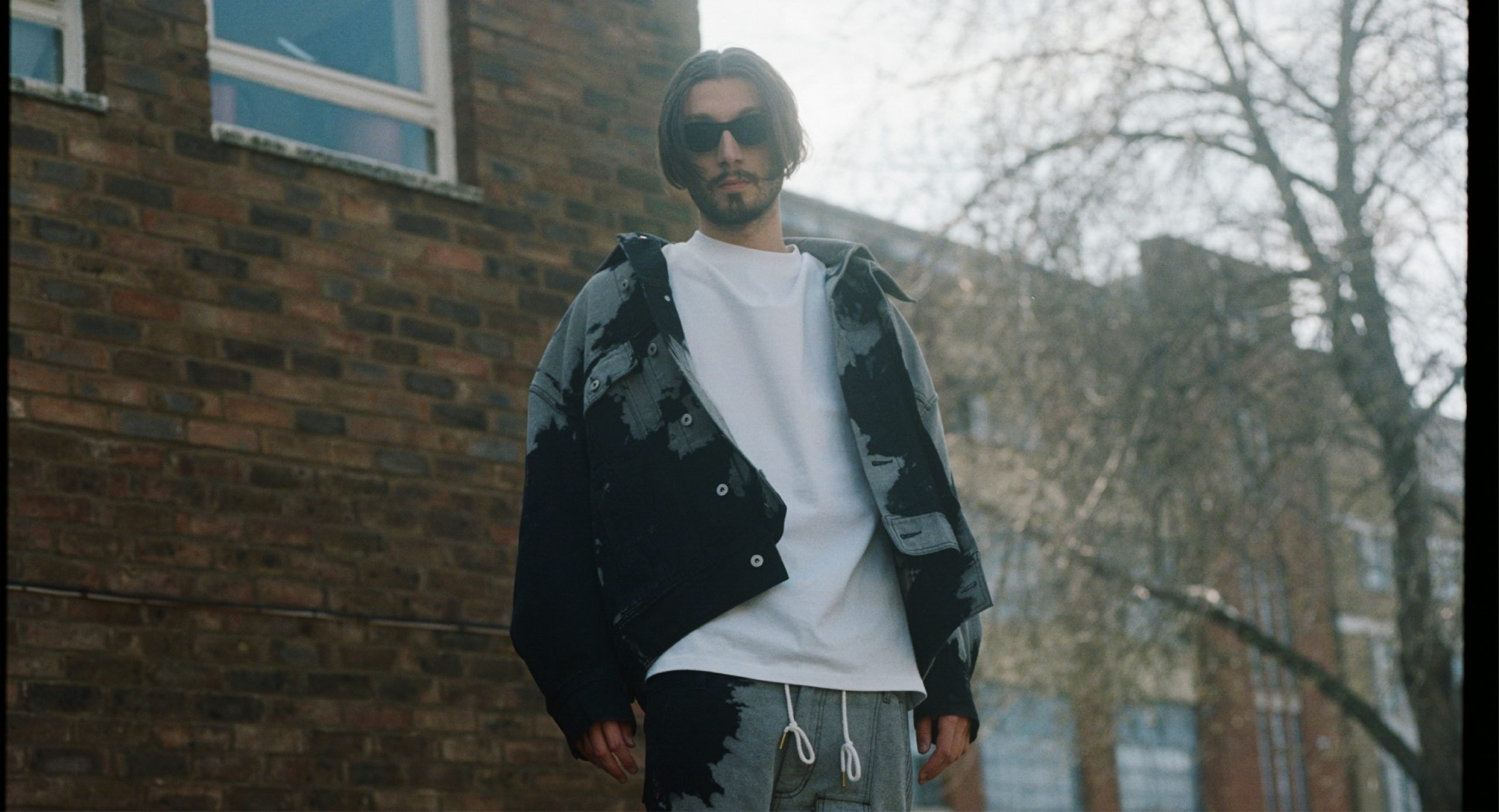 Canadian artist bbno$ burst onto the scene just a few short years ago as an independent artist who knows how to make a catchy song. With millions of social media followers and billions of streams, bbno$ is an artist to keep an eye on. He’s already played numerous sold out shows around the world and continues to innovate with release after release. His songs have paved the way for TikTok trends that you’ve no doubt seen while scrolling your FYP, and even though he admittedly doesn’t totally love the social media platform, he understand what works on there. We chatted with bbno$ to get his thoughts on TikTok, insight on his creative process, and more.

So for those who are unfamiliar with bbno$, tell us about who you are and what you do.

I’m about having fun. Uh, my name is bbno$, my real name’s Alex. I studied geology, graduated on June 7, and also dropped one of the biggest songs for 2019. I make music and I have fun making music. I try to use my platform and my job and try to make myself feel like a kid again; provide myself the ability to not grow up and get paid while doing it. That’s pretty much bbno$.

You have a new single, “mathematics,” tell us about what went into that and what the process was like.

Really, it was one of the worst songs that I made at the beginning of this year. And then we kind of swapped the beat and put a different drum loop on it and it sounded a hundred billion times better. I didn’t actually pay a million in tax; it just kind of came out of my mouth when I was writing the song. I was like, “Well, I said it with enough conviction and people are probably gonna think that I did, but I didn’t.” So that was cool. The song really has nothing to do about anything, just like a nice listening song.

I was really inspired by Liquid D and some music in the UK. And Bad Boy Chiller Crew. I’m a huge fan. I’ve been listening to them a bunch and I was like, “You know what? I wanna do one myself.” So that was pretty much the inspiration. The music video is hilarious. I was like sitting on an airplane with my videographer/director and I was like, “We should just do a bunch of scenarios with the zooming lens,” and we did a bunch of scenarios with the zooming lens. We were just off ideas and had a lot of good time. It was a really good shoot, I’ve always wanted to do that.

What’s your biggest drive and motivation that gets you like hype when you’re writing? What gets you in the zone of the creative process?

I don’t really know yet. ‘Cause if I did, I’d be way more successful. When I find it, it’s usually just that I slept eight-plus hours that day, had a salad last night, maybe had a juice, and I just feel healthy. Then when I’m making music, it just kind of comes out of me. You just don’t question it. Usually, when you’re in that mindset, it’s like all the pieces are together. It’s like when you write a really genius article or post, or like when you write a paper and you know it’s good, you just know it’s good, and then you kinda bank on that. You’re like, “I’m having fun doing this.” And that’s pretty much it. I don’t really know my writing process, but it’s definitely like a lot of coffee. No question. Coffee definitely comes through when you need it the most.

Who would you say is your biggest inspiration in the music industry?

I genuinely think everything Lil Nas X does is genius. We’re living through a time where his career is solely based on good music and the internet. It’s very fascinating because he’s one of the most ideal artists out there right now, and it’s just because of the internet. It’s another telltale sign of how relevant other forms of promotion and marketing are other than just the internet and utilizing the tools that are free out there rather than the typical music industry route. Whereas now it’s just social media; that’s the most important thing. He’s really shone through and broke through by doing the best job of it and it’s very inspirational. I would love to work for him one day and pick his brain ’cause it’s genius.

If you had to pick a major career highlight, what would you choose?

I blew up in China before I had any success globally. I’m a legend in China and it all happened because of this rich kid’s 16th birthday and it was televised in China. Long story short, he danced to one of my songs that I put up on SoundCloud. I immediately became a legend in China after that. I was doing some research, digging in, and then getting myself booked in China. It was crazy. That was my first surreal moment of fame. I did a show, I had 1,000 Instagram followers and then did a show for about 2,000 people in Shanghai. And I was like, “What? That makes no sense?” And then I got paid enough to pay for my education that year.

That was probably like the highlight of my musical career. I think nothing has amounted to that. Obviously, having “Lalala,” a bigger song, is cool, but the first little exposure to fame is very surreal. I hope anyone can experience that in some way shape or form every in their lifetime.

It proves that one person doing something can create a lot of success for another person. That’s really awesome!

It’s fascinating. Doesn’t really make any sense, but it’s all ’cause of social media.

You have your own label now — what’s that been like having that kind of change added to all the other successes you’ve had?

It’s hard to effectively branch out and do everything incredibly right. But you know, I try. It’s adding more work to my plate where I don’t really need to, but I like the business of my job and being able to like offer something. I can help other artists and other musicians; it’s interesting. I don’t think I can offer the world, but I can at least guide them, provide examples of what I would do in certain situations, how to benefit a career, the importance of social media, and try to inform people on how to be a popular musician or get success through music.

What is your best advice for people trying to break into the industry?

TikTok. That’s the only thing that matters right now. I posted a video [yesterday] and it got 7 million views. My songs and my music video on every single other platform were fine. Over a time of 18 or 19 days, [the music video] has had 6 million views. It hasn’t even hit 20 hours. The accessibility of a platform like TikTok where it’s free, you can be yourself on it and people will love you. Plus you will cultivate a die-hard fanbase by just being yourself. It’d be stupid to not be on TikTok.

I understand that it’s not necessarily every single artist’s perspective. They’re like, “I’ll just let the art speak for itself.” That’s just not the case now. You just have to kind of bring yourself down to a point where it’s like, “You know, I get TikTok. I don’t like it that much. I don’t like making videos, I like playing video games.” But you gotta count your blessings; you get to do this and you get to do that. If you really want it, you will do it. That’s just kinda it.

Sometimes artists will only post a snippet of a song on TikTok — before the song’s even done — and that takes off. How do you feel that works into artistry?

I mean, the artistry just leans on what the media is based on. It’s like, you know, back in the day when people would just make music for pop radio and that was the format that would pull people up, make people. But now it doesn’t matter because alternative records are on the radio. I remember when “Lalala” was on the radio because it was such a big TikTok song.

But as far as artistry goes, these days it kinda sucks. But “As It Was” by Harry Styles is such an amazing song. I think it’s fantastic. The first time you hear the hook, by the second time you hear it, you can sing it completely. And it reflects that it’s a beautiful record.

The music industry keeps changing and it’s ever-changing. You see Drake always adapting because he’s got a team of people adapting too. “Tootsie Slide” popped off because it’s a song just for a dance. But now Instagram shorts and all the other platforms are making a comparison to TikTok. ‘Cause it’s the power; people just wanna catch up essentially.

Any other projects you’ve been working on beyond “mathematics”? What’s next on the plate for you?

I’ve got an album coming out in September, it’s called Bag or Die. It’s probably one of my best projects … definitely my best project. Then I’m working on this joint album with my frequent collaborator Yung Gravy. We’re gonna be doing a big tour, like 110 shows.

Life’s just moving. I woke up today and I feel kinda bored because I know exactly what’s happening here; everything’s already planned. I don’t know if I like that. I like having things open, being opportunistic, and jumping on things. But I’m gonna see it through, make a bunch of money, see a bunch of my fans, and that’s my life.