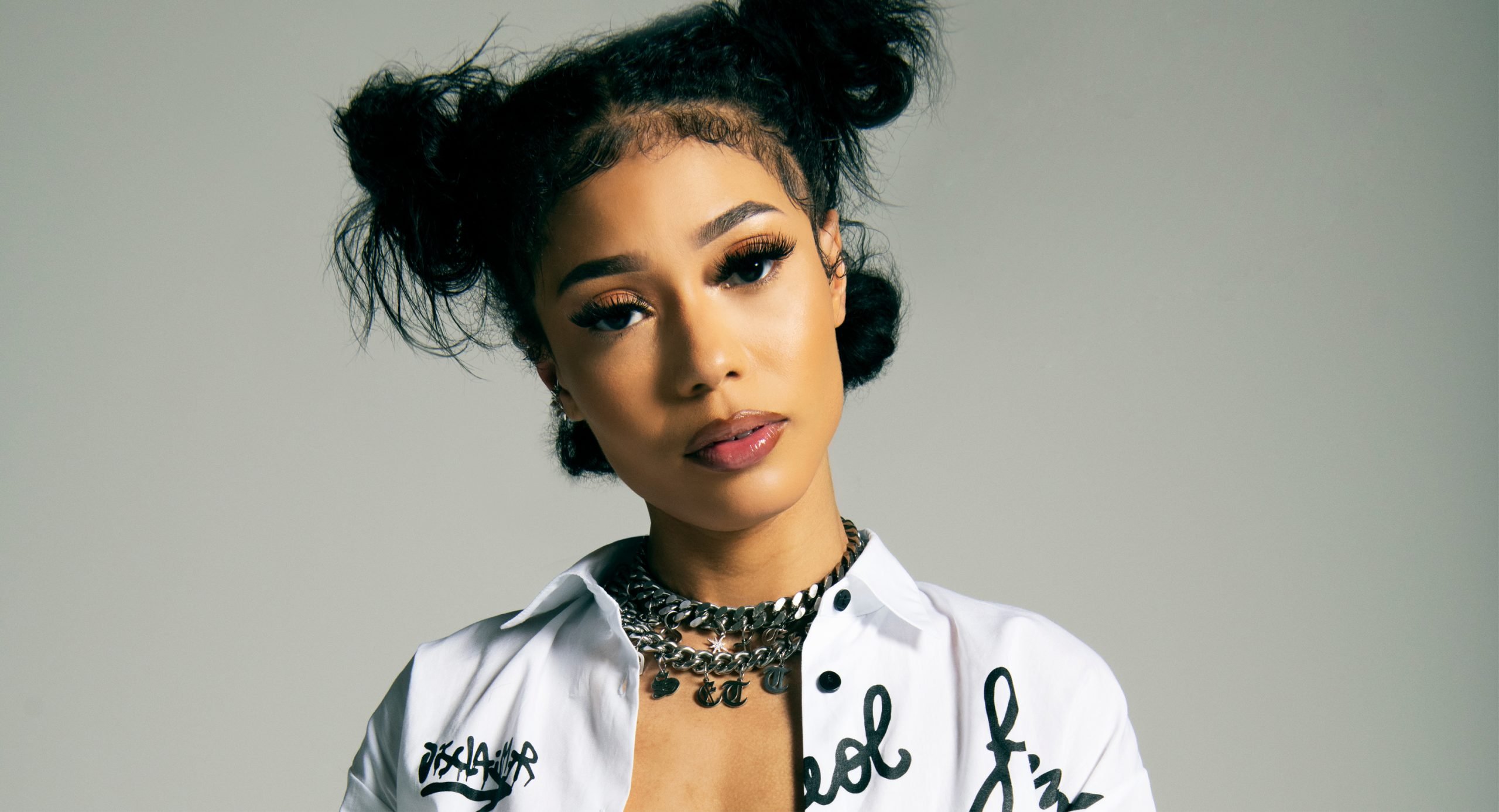 It’s an exciting time to be Coi Leray right now. After first making music at 14, the Boston-born talent has released what every artist has dreams of making: an album. Titled Trendsetter, the now-25-year-old is a name on a lot of people’s lips, and it’s for a good reason.

Released via Republic Records, Trendsetter charted on the main US Billboard 200 chart in its debut week, achieving the highest first-week sales this year by a female hip-hop act. The 20-track LP is layered with versatility and stands for everything Leray has been preaching about over the past few years. She’s not just a rapper, she’s an artist. Pitchfork praised the record for never lacking in energy while Rolling Stone stated her passion is “thrilling to listen to.” In addition to the platinum-selling remix of her single “No More Parties” with Lil Durk and the gold-certified single “Big Purr (Prrdd)” with Pooh Shiesty, Trendsetter continues to boast various other big-name collaborations that include Polo G, H.E.R., and G Herbo, to name a few. Her most recent single “Blick Blick,” which has been making waves, features none other than Nicki Minaj. 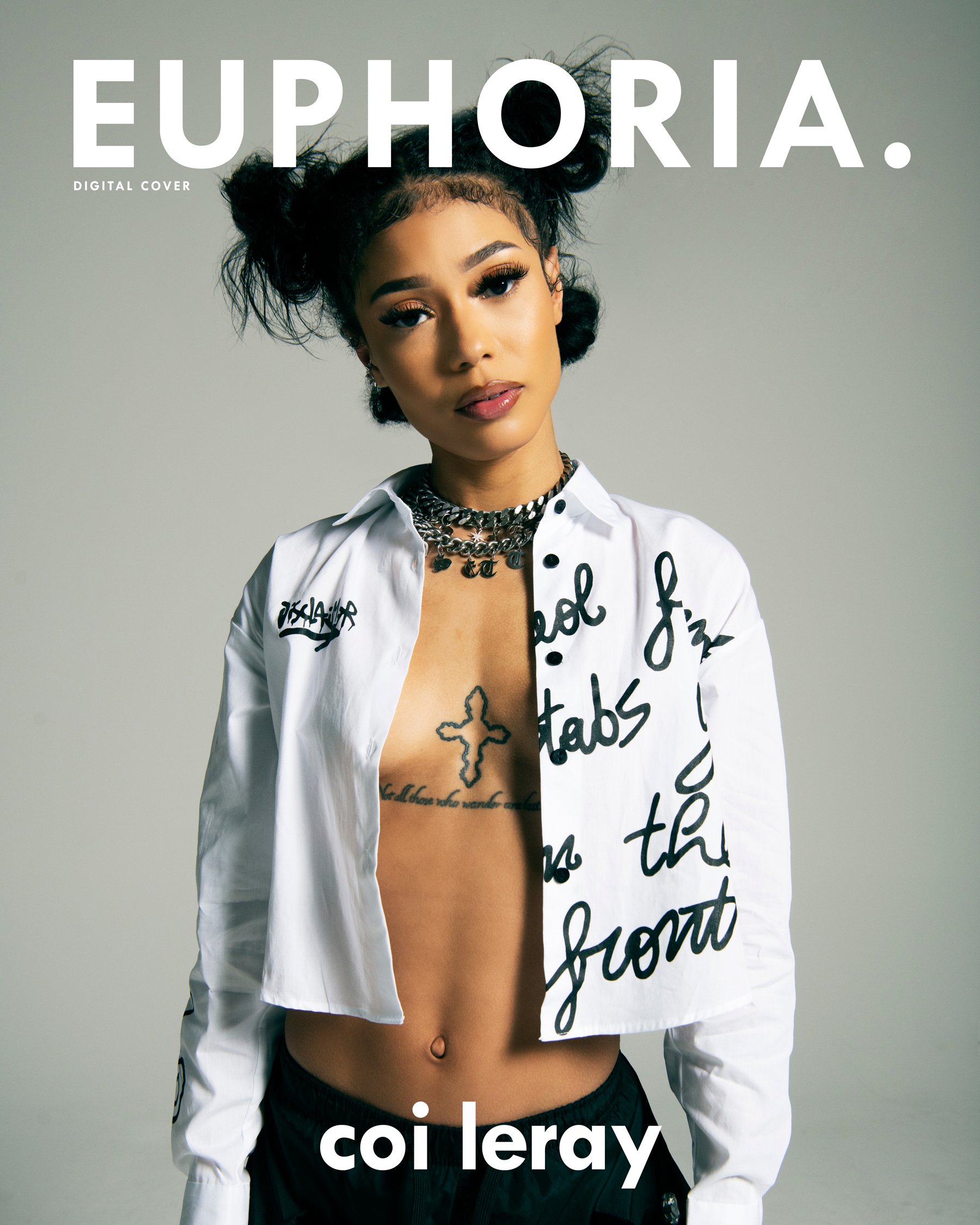 “I feel really good,” Leray tells EUPHORIA. after having time to soak in the reception her album has received. “People tried to say it didn’t do well but it did more than your favorite artist,” she adds while laughing. “A lot of people don’t understand that over 70,000 songs get dropped a day and over 400,000 songs per week. To have my album chart on the US Billboard 200 is crazy because out of all the 70,000 millions of songs that dropped, I’m on there, so, it’s a blessing.”

Both Leray’s career and status as a pop culture figure are constantly evolving and re-peaking. Ever since her 2018 breakthrough single “Huddy,” Leray’s drive to carry on organically generating a lot of buzz around her name has been transparent. She’s performed at countless festivals, dropped a serious amount of material in between, and served as a feature artist on several songs. Prior to her debut album, Leray made sure to keep the wheels turning and kept listeners fed by releasing two mixtapes and an EP in the span of three years. Currently, her monthly listeners on Spotify stand at 5 million while her follower count on TikTok just reached 9.8 million. 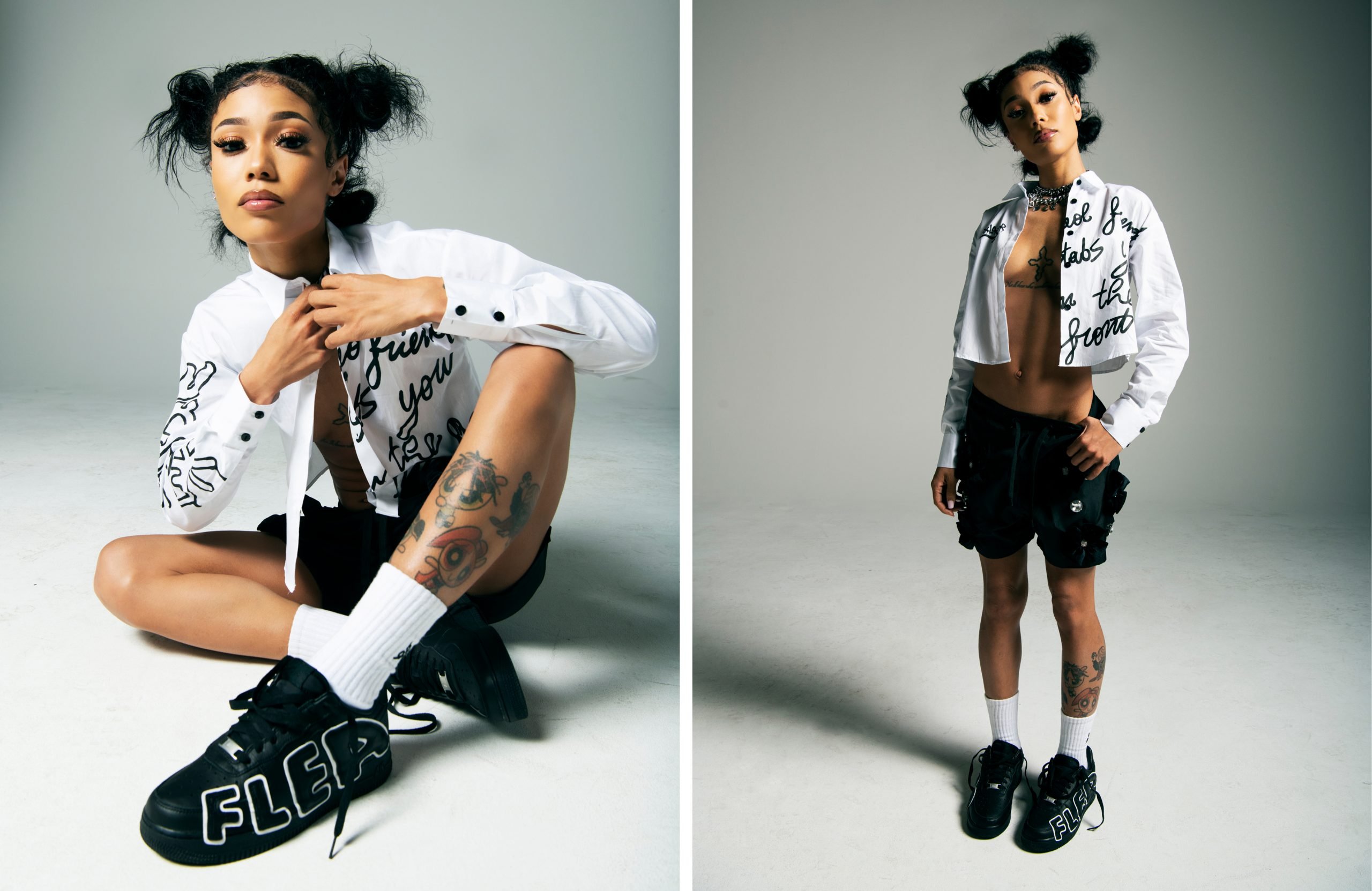 With all the ongoing attention and talk about her album, Leray has found herself having to deal with negativity online from those who want to find any reason to undermine her growth as an artist and the hard work she’s put in. “Honestly, before, I used to be the one like, ‘Yo, what the fuck, I hate this shit,’” Leray admits. However, since being reached out to by her peers, she has been made to feel her worth, explaining, “Now, you’d be surprised, so many people behind the scenes be hitting me, I’m talking your favorite favorite favorite top dog artists, that hit me and tell me I’m really that girl.”

She continues: “To still be able to have the feedback from all these major artists and people behind the scenes that support me, feels good because people are watching and they helping me understand the music business. This is part of the music business, it’s all in all just trusting the process.”

Leray says the lack of promo for the album’s first-week run was partly due to her putting her mental and physical health first. A few months ago, she fractured her patella, which contributed to her not being as active as she had hoped. Despite the pushbacks, Leray takes a lot of pride in her work and still finds a way to be a positive light during all the hard times. “People can’t stop you, you feel me?” she says. “Overcoming all the hate and all the negative things is the best part because people be thinking, ‘Damn, we got her, it’s over for her,’ but you don’t because you come back 10 times harder and return with something better.”

With 20 songs on the tracklist and 14 feature artists spread out, Leray insists she has been “locked in” and focused on her craft for the past three years. “If you go on my Instagram from months ago you will see where me and G Herbo were in the studio from last year making the song, the same with A Boogie,” she says, adding, “Over time I always knew I was going to drop a project, I just wanted it to be the best project ever, and I wanted it to be a really good body of work.” After the release of 2021’s million-selling single “No More Parties,” Leray is aware there was potential for her to drop an album last year but notes she was still finding and developing herself, expressing, “over this time, I finally waited for the right moment.” 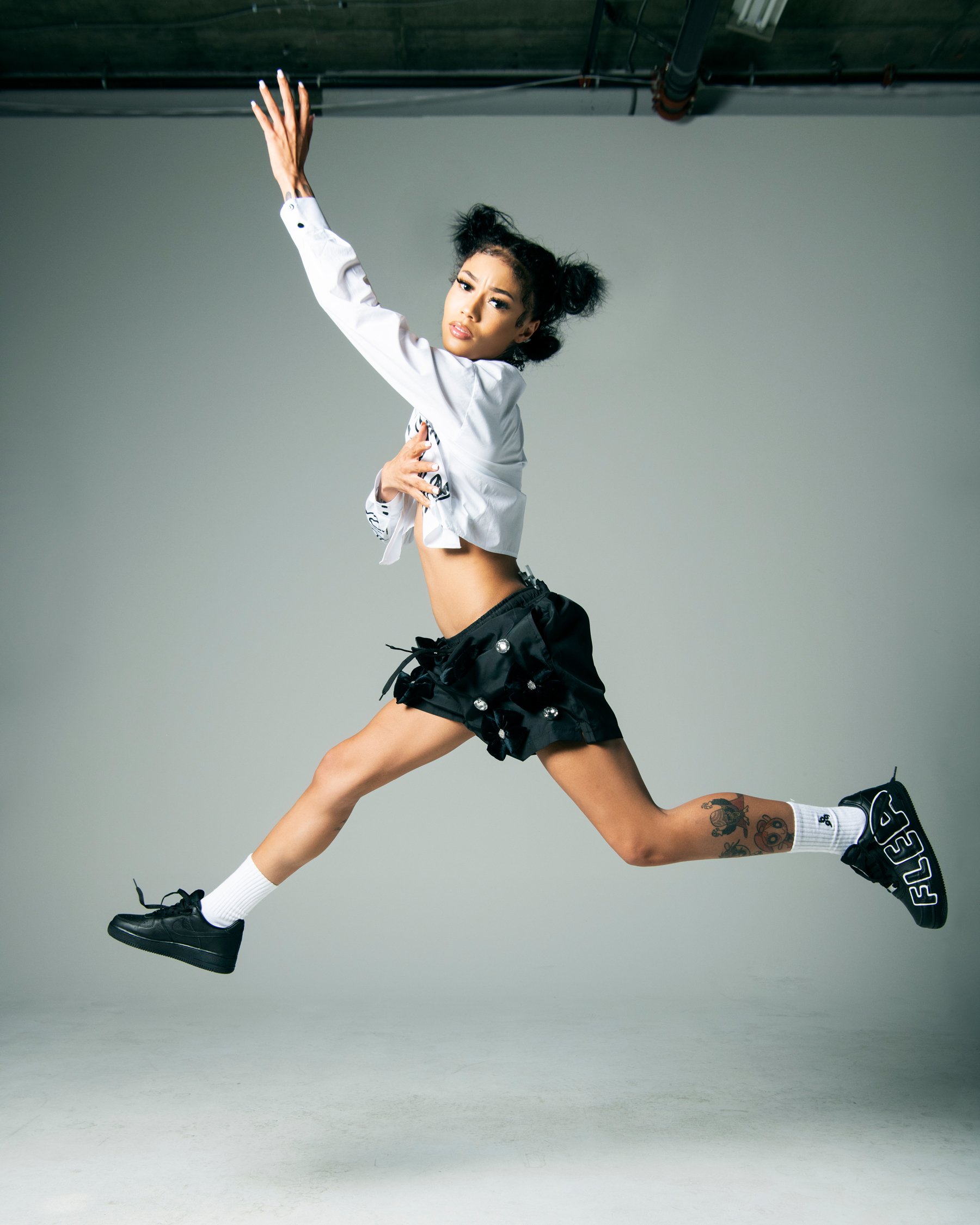 “There was a lot of music that didn’t make the final cut,” she continues. “It was a little weird to do 20 tracks too because it felt like a lot. It only makes sense to put my hit records, “No More Parties,” “Pig Purr (Prrdd),” and “TWINNEM,” because people are still being introduced to those songs so unfortunately, those three songs took up space for newer songs, but that’s OK because these newer songs are going to be saved for the next project because they are hard.”

Trendsetter’s most recent hit, “Blick Blick” with Minaj, has proven to be a fire collaboration worth bragging about, becoming Leray’s third single to enter the US Hot 100 and second to peak within the top 40. Its colorful accompanying music video, which has 20 million YouTube views and counting, is saturated with confident, bad bitch energy from start to finish. Proving to be a chameleon, Leray can be seen performing choreography and sporting a number of eye-catching looks as well as providing a couple of different scenes with Minaj herself. While sitting at the top of her most popular songs on Spotify with over 17 million streams, the track has also been included in Minaj’s Carpool Karaoke episode with James Corden and in an endless amount of TikTok videos. With its recent re-entry on the Hot 100, “Blick Blick”’s potential to keep elevating is imminent.

“Working with Nicki was super dope,” Leray says. “She was super humble and it was super flattering to be in her trailer and her personal space as it didn’t feel forced or anything, it didn’t feel like either of us was uncomfortable.” In a world full of manufactured collaborations, Leray says the opportunity felt like a “genuine relationship with someone who fuck with me so I appreciate everything Nicki has done for me.” 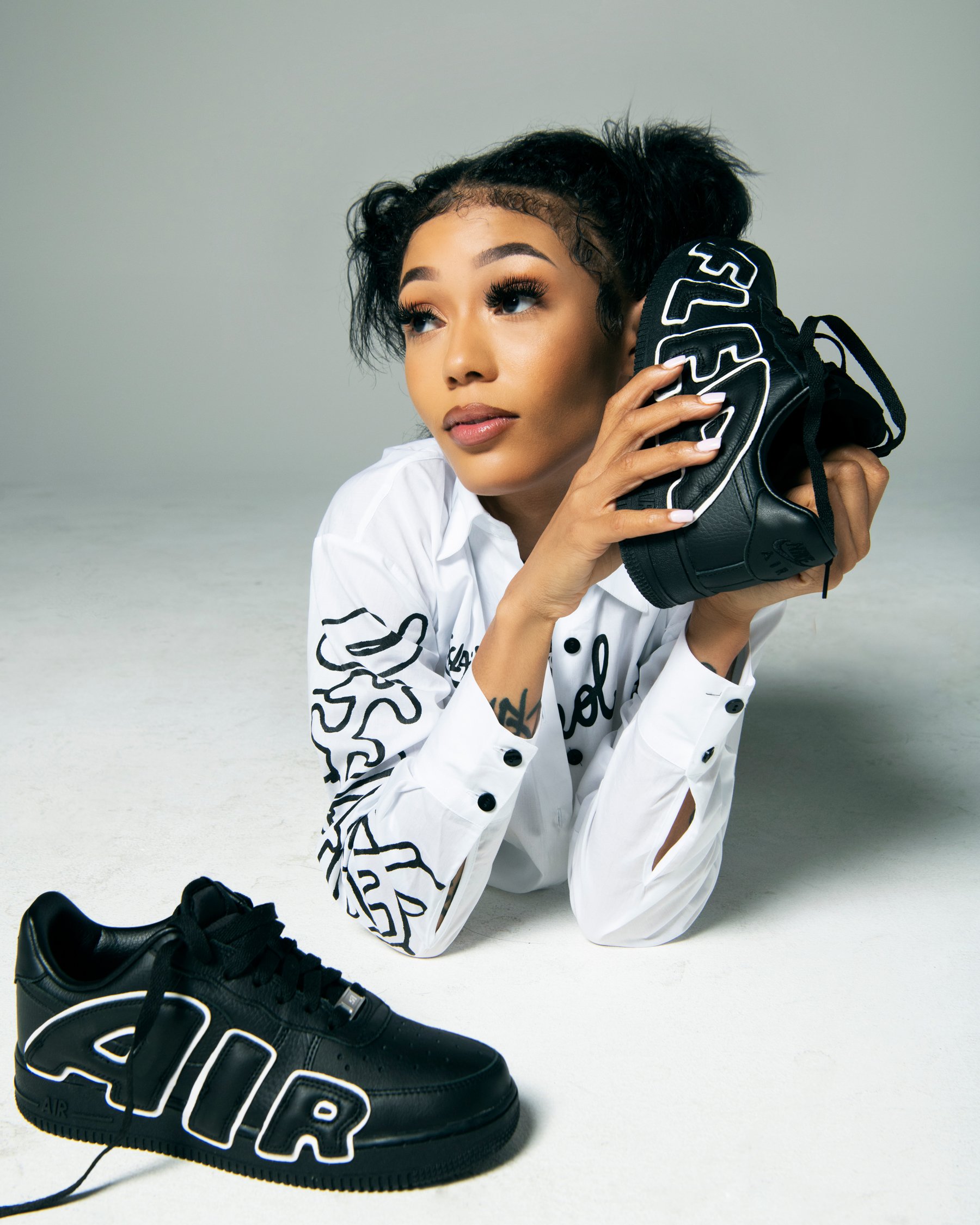 The only other female to feature on Trendsetter is H.E.R. Primarily known for her soulful, R&B vocals, she delivers a more rap-infused verse with attitude. “She’s a creator; the girl makes beats, she sings, she plays instruments,” Leray says, praising H.E.R.’s musical talents. “Ain’t no way in my mind that she wouldn’t have fed off my energy and went 10 times harder in her way,” she shares when asked whether Leray influenced H.E.R.’s approach. “She was talking that shit, it’s probably one of my favorite verses on the project just because of her delivery and everything she said.”

Most importantly, Leray indicates being a trendsetter is being your true authentic self. “These days in the world, people are very uncomfortable with themselves, and this picture is painted of how life is supposed to be. As an artist in the industry, I wanted to be one of the artists that really focuses on real-life situations and that’s why I do it in my music but also in person because there’s more to life than a Birkin bag and a Lamborghini,” she says. Instead, Leray believes her fellow musicians, herself included, should be aiming to do a better job at normalizing and displaying situations that they are actually going through. “When the fans can relate and touch you, you’ve got them forever,” she adds.

“I swear to god it’s gotten me a long way, can’t nobody tell me shit,” Leray says. “They gon’ laugh about my body size, they be laughing about my teeth, they laughed about my music, whatever it is, I overcame it 10 times harder. Anything they’ve laughed at, I came back rewarded for it in so many ways.”

Prior to Trendsetter, Leray had already secured herself six award nominations, including Rap/Hip-Hop Female Artist at the American Music Awards and an iHeart Radio Music Award for TikTok Bop of the Year. While a collection of trophies and plaques sound appetizing, Leray is more focused on building a legacy for herself. “I wanna be able to have my music so timeless that no matter what I do in the world, you’re gonna fucking remember me for my music and you’re gonna love it,” she explains. Leray credits Drake’s debut mixtape, So Far Gone, as an example of a body of work that is still talked about today. “I wanna be like that,” she remarks.

After previously announcing on Twitter she had auditioned for Euphoria, HBO’s hugely successful teen drama television series, Leray’s center of attention still remains on the music side of things. With that being said, she’s not completely ruling out an acting career if the opportunity comes her way. “I can see myself acting; I’m more focused on the music,” she says. “I’m so multitalented, my hands, feet, arms, and my knees are a little wobbly but other than that, I can go. I can do anything, anything that God has for me planned, I’m ready to go ahead and take that path.” 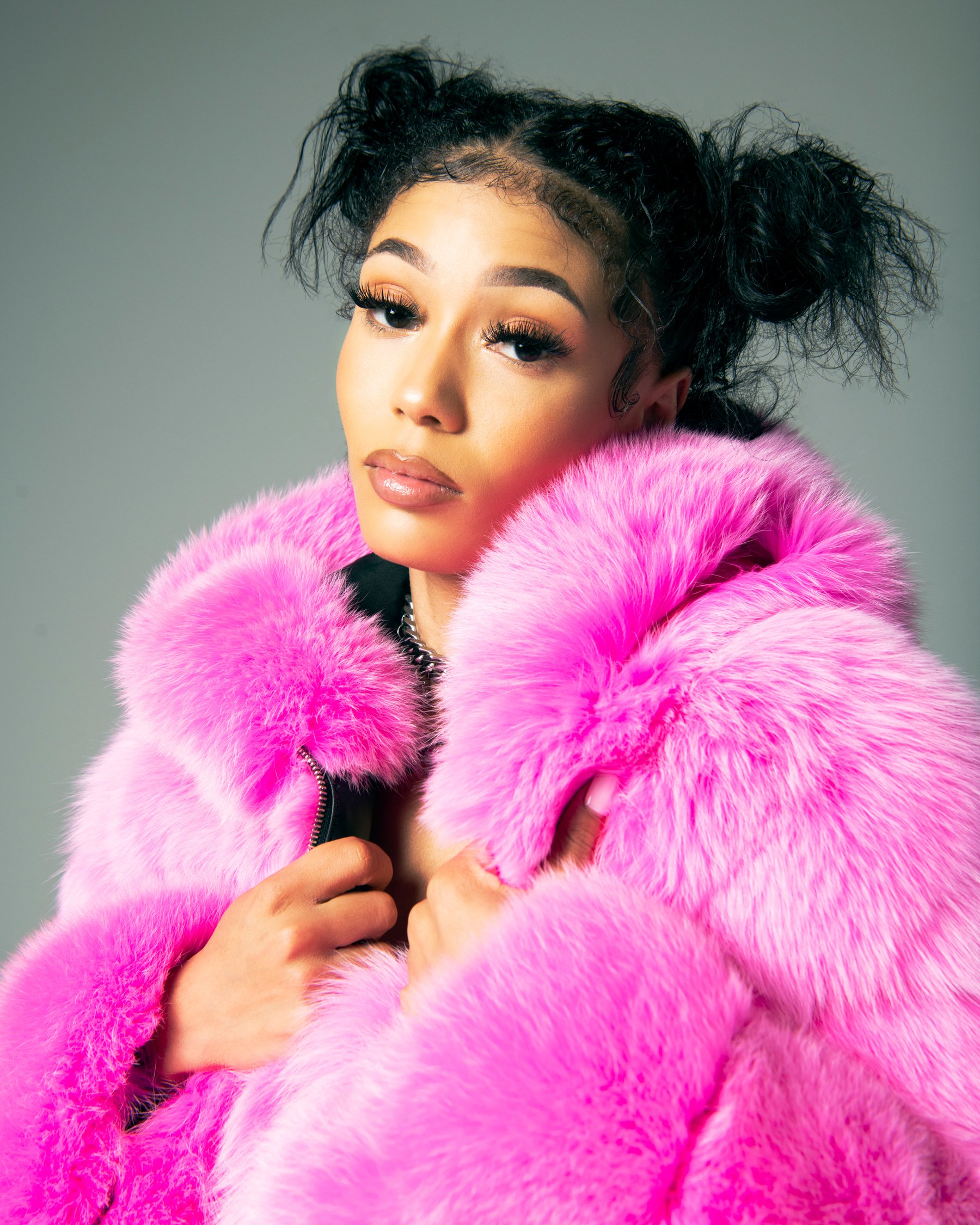 Despite her fair share of success, Leray isn’t ready to take her shoes off and get too comfortable just yet. “I’ve been nominated six times, my singles are on Billboard, I’ve been on every festival stage you can think of, I’ve done collaborations with some of the biggest artists in the world, I’ve traveled the world. This debut album feels great but I’m still hungry, I still ain’t satisfied,” she clarifies. “I’m glad I’m able to drop this music out but I’m ready to keep going.”

In fact, Leray is already ready to bash out another album so soon. “I’m already locked in with the second project. Not even gonna lie, we’re ready to go,” she says. “We’re coming hard, now we not stopping.” But first, Leray knows the Trendsetter era still has so much more to give, therefore, she plans to keep the campaign alive for the time being. After recently shooting a video with G Herbo for “Thief in the Night,” Leray announces “mad visuals” for “Mountains” with Fivio Foreign and Young M.A and “Overthinking” with H.E.R. are also on their way.

In promotion of the album, Leray will embark on a nationwide North American tour that will kick off in San Francisco on May 31 and will finish up in Los Angeles on June 23. One of her main goals for 2022 is to go harder with her performances like never before. After her high-energy medley on NBC’s The Tonight Show Starring Jimmy Fallon, Leray wants to raise the bar even more. “I want my stage presence to be elevated in a whole other way. I’m doing what I gotta do to make sure these people are actually seeing me out there with the dance moves coming in 10 times harder,” she says.