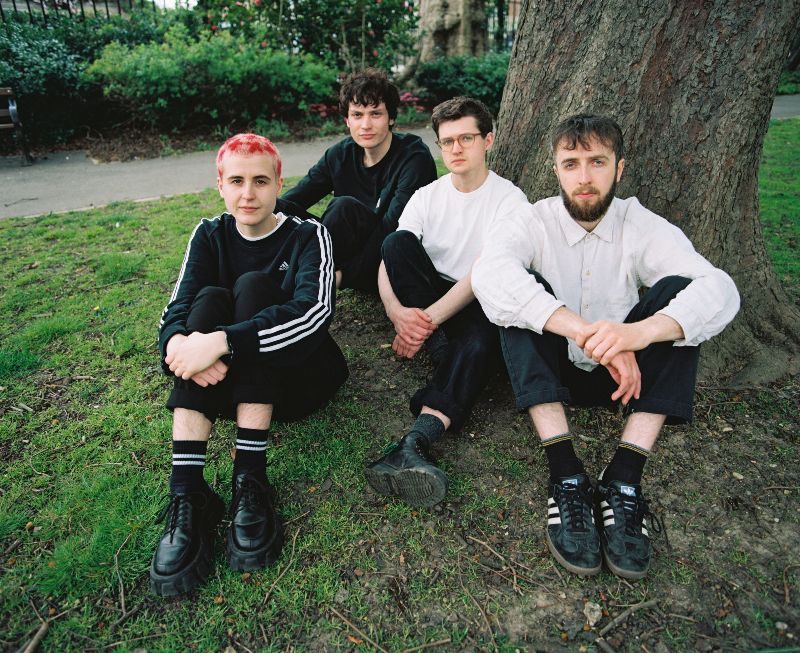 Put four wildly creative, musically minded souls together in Manchester, England, and what do you get? Over the years, you could have had The Stone Roses or The Smiths — whose indie legacies both play a huge role in the city’s culture. But today, Porij are the latest Mancunian four-piece blazing a new musical trail in the city in their own chaotic way.

Dance and indie form the band’s foundations, but with every new release, Porij burst into new sonic territories. Nobody (not even the band themselves) can seem to pin them down — but this is what gives Porij such vibrant appeal. In 2020, the band released their debut mixtape called Breakfast. Since then, countless radio plays and widespread press coverage in the UK and beyond has seen the band grow in popularity.

“Lose Our Minds” is Porij’s latest single, and their new EP is due for release this summer. We chatted to lead vocalist and keys player, Eggy, to find out more about Porij.

It has been chaotic, but in the best way! We’re about to go on tour with Metronomy, we have lots of festivals coming up, we’ve been releasing new music … you can’t really ask for much more, can you? It’s been crazy.

What did it initially feel like being thrown into the spotlight with your debut Breakfast mixtape release?

It was really mental. Going into lockdown, I felt like we were really lucky because the way that we write is so self-contained — we don’t work with any other producers, we write and record everything ourselves. So, we were just able to write loads of music and put it together into our debut mixtape. Seeing it resonating with people when we released it was really crazy, but the scale of it didn’t actually hit us until lockdown ended. Coming out and playing these songs to a sea of faces was so wonderful.

How have things changed for you all since then?

We’ve definitely been making the most of playing live music again. Playing live, for us, is such a core part of Porij’s DNA. When you go to see a Porij show, our music makes sense. We don’t play or write in a specific genre. But once you see the whole show, it encapsulates the whole experience. It’s been so beautiful to get back out there again.

You all met as music students in Manchester. Do you think the city still latches onto its traditional indie heritage or is its sound evolving for the modern day?

I think Manchester is such a melting pot of music right now and that’s why it was so exciting to study there. There are so many venues here. You could walk out in the Northern Quarter and you’ve got Night & Day, or head elsewhere and you can catch something with a different vibe like Soup Kitchen down south. There’s so much going on every single day.

But in terms of heritage, from a dance perspective, Manchester has been really key for us. Especially with places like The Hacienda, I think that indie and dance are two big genre influences that make up Porij. I’d say our sound is pretty Mancunian.

What’s it like being in a band with four multi-instrumentalists, beat-makers, and producers? Do ideas ever clash?

Sometimes they clash and other times they don’t — I think it’s always going to be both. As soon as you put four people together in one room who are all doing their thing, of course you’ll get clashes. But that’s the beauty of it. When you blend everything together into something that everyone loves, it’s like, “wow, what is this? I don’t know what it is, but I love it!” It’s also what makes it fun. It means we’re not just writing in a box; we get to go in different directions and explore so many different things.

With that in mind, what’s the secret behind every new release you bring out sounding so different from the last?

I guess it would be our core setup. Every song is written differently, we’re never really writing in the same way. Someone can bring in a whole song, a part of a song or an eight-bar loop to work with. It’s all about not restricting ourselves.

Whose idea was it to form your own label, Oat Gang Records? What inspired you to do so?

When we first started out, we went through Distrokid to distribute our music. But any release we put through, we had to do it under a label name of some kind. So, we just thought let’s be Oat Gang Records, that’s cool, we didn’t really think about it. It wasn’t until later where we started to see the potential with it and we’ve stayed independent all this time. It’s crazy to see how far we’ve gotten without a huge record label behind us – we’re just going for it and we like the ethos of doing everything in-house.

However, everything being DIY came about through necessity. We don’t have lots of money, we were poor students (now I’m just poor and not a student), we do our own artwork, our own videos, and then we realized that this is all helping to form the purest version of Porij that we can ever be. It’s super organic oats.

Is there a core sound that you aim for while writing your music together?

I think at the minute, we’re just literally throwing up ideas. We’re vomiting out music and seeing what we think is still delicious afterwards (that’s maybe the worst thing I’ve said in my life)! But yeah, I haven’t personally sat down and thought I’m going to write a song in exactly one style. But we all take in influences, of course.

I do think that Porij has a really distinct sound. I couldn’t tell you what that is, but I think it’s cool that nobody can figure out what that is right now. There’s a distinct sound even though all of our songs sound kinda different. The next track we’re releasing (“Lose Our Minds”) is crazy, by the way.

Nice! Can you let us in on any details?

I can tell you that musically, it’s quite UK garage inspired and is definitely an ode to Katy B, who did not get the love she deserved — justice for Katy B! This song is all about that. Well, not all about that, but sonically it has that influence. There’s a lyric in it which says, “I’m like that Katy baby / On a mission,” which I just had to throw in.

Who came up with the idea to get Lynks on board for the music video for your track “Figure Skating?”

It was actually beautifully organic. Me and Lynks were sitting next to each other at a Christmas dinner. We were a bit tipsy and enjoying our food, and then I started telling him all about this song we had coming up called “Figure Skating.” But we had the music video coming up really soon and we had no idea what to do with it. Then Lynks just casually turned to me and said, “I am an impeccable ice skater. Do you want me to be in your video?” So, we did it and it was amazing. I just sat at this ice rink, ate nuts and drank cider for three hours while Lynks did his thing. He was a far better ice skater than he’d advertised! I don’t think the video encapsulates just how talented the man is.

Debut album on the cards?

Listen … all I can tell you is that “Figure Skating” is going to be the lead single of an EP that we’ll be releasing this summer. That’s all ready to go. And we have perhaps started dabbling in writing our debut record. It’s super exciting.

Where would you like Porij to be in five years’ time?

I would like to have seen all the nooks and crannies of the world as part of a chaotic, beautiful band. I would like to be financially stable and not still living in my parents’ house! I just hope we’re still writing crazy tunes, playing filthy wobblers and performing music for people. That’s the dream.

Finally, we have to ask, are you all real-life lovers of porridge?

I’m not going to lie to you, sometimes with a band name, you’ve just got to get it out of the way! There’s no strong meaning behind it — I think we were just quite hungry when it came round to choosing the band name. Then we thought, “what if we spelt it stupidly? That would be a laugh.” It’s come back to bite us a bit now, because whenever anyone searches for us now, they find Porridge Radio! But yeah, I suppose we like a bit of breakfast sustenance.