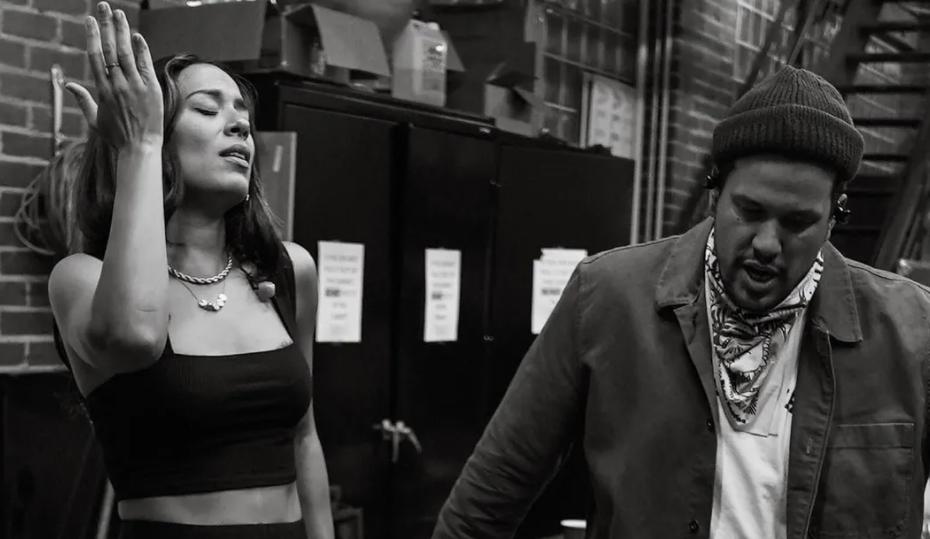 Johnnyswim’s self-titled record it finds them at their most vulnerable and exposed in the most authentic of ways. The married duo comprised of Amanda Sudano-Ramirez and Abner Ramirez get deep about life’s up and downs when it comes to relationships and challenges that have emerged in an ever-changing world.

The singer/songwriters chatted with EUPHORIA. over Zoom to discuss the creation of self-titled and much more.

Congrats on the release of your new album! What was the creative process like? What are you most excited about for its release?

Abner: It was unique for us in our creative experience because typically we’re on tour while writing songs for a new album. We’ll try stuff out even in soundcheck and there’s a sense of being in the room and you can anticipate what this new song is gonna sound like even if the crowd’s not there yet. You’re in the venue and it helps direct our artistic output just being able to be in the room. Sometimes we’ll play them live for folks.

This album was a meditative time, which we’re not used to.  It was just me and Amanda together in a room creating a song, right along as I’m producing the track. It was a new experience for us. Our goal has always been honesty through our creativity and because of the process it was the most honest work we’ve made today- which is why it’s our first self-titled album even though it’s our fourth studio album because it truly feels like the most honest representation of who we are right now.

What are some themes that run throughout? Did you have a sense of something you wanted listeners to take away from JOHNNYSWIM?

Abner: I think with every project or they come to a Johnnyswim show, my greatest hope and I believe I can speak for both of us in this is that people feel seen. I think there’s power in knowing you’re not alone and whatever your circumstances even in joyful moments. You want to party with your friends. In sad moments, you maybe don’t want to have a conversation with everybody but a hug just to know somebody has your back. To know somebody has felt the way you feel or something similar that you’re not alone. I hope that in this album that songs speak to folks. I hope people have a moment where they hear a song and they’re like, “wow, I’ve never heard that said in a song before and I feel that way.” We always hope that our music is a service to folks. We wanted to help people. We want people to feel seen, loved, known and cared for.

How do you feel your music has evolved since your debut record and everything leading up to this release?

Amanda: I would say our goal has always been for our music to be representative of us and what we’re truly walking through, what we’re truly doing. We’ve always wanted it to be a picture of where we are in our life because if we can be honest and be ourselves and trying not to be anybody else. If we can give the world ourselves a little of it then there’s bound to be somebody that goes “I feel the same way” or “I’ve been through the same thing.”  That’s all we have to offer. I feel like we’ve gotten better at allowing ourselves to be ourselves.

Abner: This album reminds us of our earliest work. Songs that aren’t even out. There was this EP we released that was only out on CD, which was called One Through Four. There’s songs on here “Shiny Universe” — kind of the attitude, quirkiness reminds me of in a great way our first songs we were writing 17 years ago. There’s a playfulness, lightness that I was really encouraged to hear.

Which song on the album did you have the most fun recording and why?

Amanda:  I would say “Desmond’s Song” because we wrote that song 15 years ago or at least started writing it. The chunk of it was written 15 years ago and we had tried recording it multiple times and it just always felt like kind of boring. We didn’t know what to do with it. We got in the studio with our friend Jonathan (music director) and our drummer named Aaron Redfield, who is just a genius at what he does. I remember when he first started playing drums, I was like, “ah I don’t know what this is gonna feel like,” and all the sudden it went from being black and white to being color, vibrant, and having a vibe. It suddenly brought the song to life so that was really fun for me.

Abner: I’d say, “Holla Holla Holla.” It was the same kind of experience. We recorded the drums and guitars in the same day. I really loved that beat and I thought it was something that was a little out of the box for a Johnnyswim album to kind of have a dance-groove going. It’s an old Washington DC groove from the ’80s but that got popularized in the ’90s and 2000s. I’ve always wanted to use that groove in a song and we wrote a song to it. I wanted to write a party song and I feel like we did.

Your lyrics come across as vulnerable and heartfelt. What is your songwriting process and how do you find a balance between introspective lyrics and more upbeat melodies?

Abner: I’ve never tried to write lyrics specifically to fit a mood. Balance is something we don’t do. Maybe it’s something we should do? People ask us how do you balance personal life and professional life? We don’t. We like our life and our life includes you and our babies and that stage right downstairs from where we are right now. The same kinda thing happens with lyrics for us. The mission isn’t just to have the lyrics sound good. Do these lyrics truly represent what we’re trying to say? Do they truly and honestly represent what we feel in this moment? That dictates if it’s an introspective lyric or an upbeat, cheery lyric.

Amanda: There’s a few times too where we’re being very poetic on a song and we would look at each other and be like, “let’s just say say what we wanna say.” Another songwriter said to us, “This sounds a little three writers in a room.” We try to make it as we’re saying what we need to say. Hopefully we find a poetic way of saying things sometimes. As far as mixing and balancing the two, I don’t think that crosses our minds as much.

Abner: We’ll have our first draft by the end of the year!