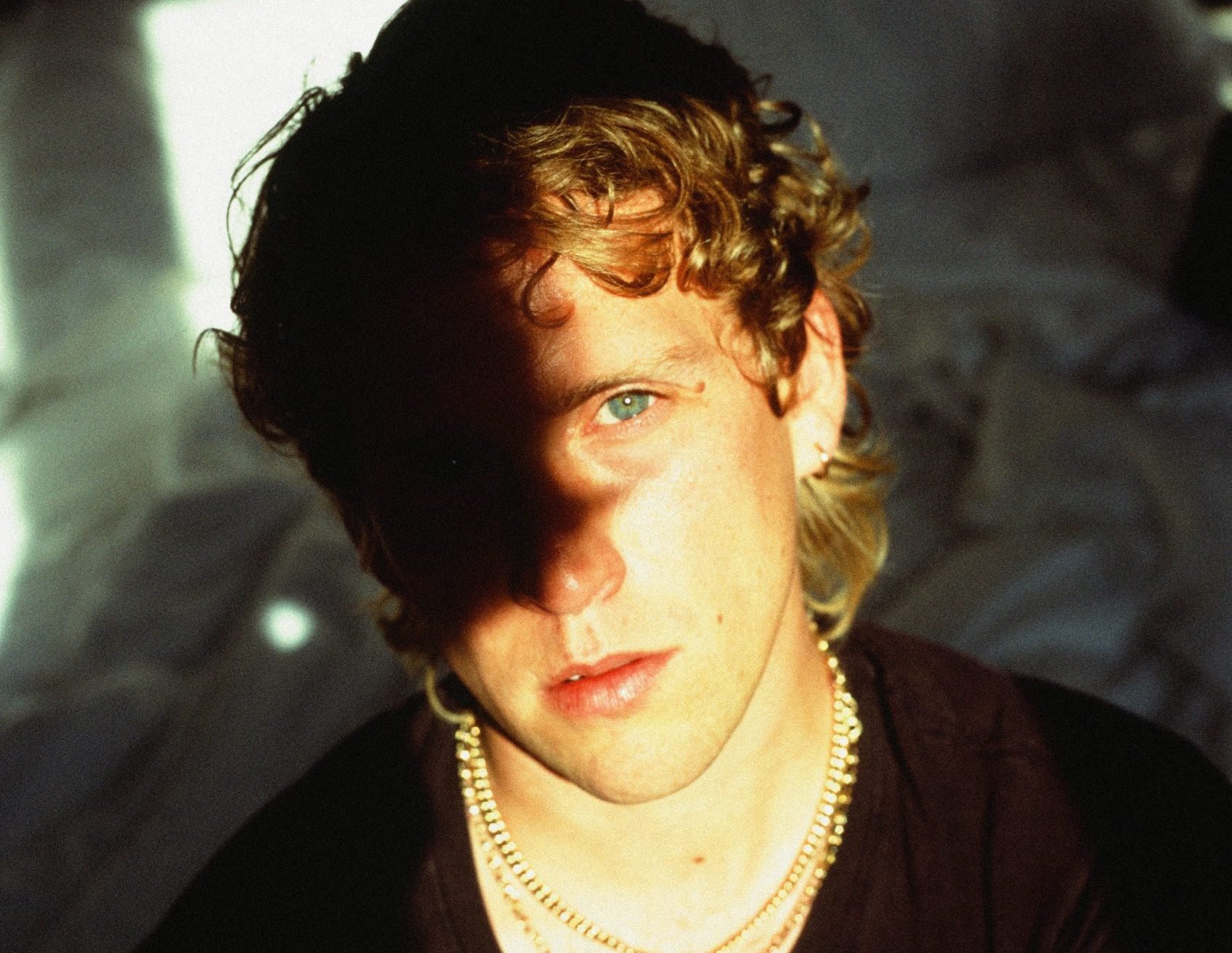 Even by his own admission, Rhodes’s sophomore album has been a long time coming. It’s been nearly seven years since the release of his acclaimed debut album Wishes, which included singles such as “Your Soul” and “Turning Back Around.”

Often singer-songwriters’ success is bolstered by one hit song, which is propelled into the world’s collective consciousness through unrelenting radio play, targeted Facebook ads, and, surprisingly frequently, on car advertisements. Rhodes’s journey in building his devoted following has been welcomingly different.

Thanks to his astonishing voice and emotive lyricism, the devotion of the English musician’s fanbase has been unaltered by the lack of a follow-up album. After a string of single releases, in 2020 Rhodes released his second body of work in the form of his devastatingly beautiful EP I’m Not Okay.

In an exclusive chat with EUPHORIA., the artist dives into his stunning new single “No Words,” what it’s like to release during a pandemic, and reflects upon his upcoming album.

What made you feel like “No Words” would be the right first single?

I’d gone into the recording process for the album with so much material. I think I had over 100 songs that I liked. Then I went into the studio and just choose 10 tracks that I wanted to do, without there being too much thought behind it. I just thought I’d pick the ones I’m feeling at the moment.

Then, as always, you live with the songs for such a long time and you just try to get them right. I had this period of time where we were mixing the album and I just had this creative surge. One morning I woke up, wrote this song, and I was just desperate to tag it onto the album.

The song is about the point where you’re waking up and you can’t quite tell what’s real and what’s a dream. I felt like that was quite a vivid feeling I had in general throughout my daily life too. I guess it’s a sad song but I feel like the melody and instrumentation still give it that element of hope

Obviously “No Words” chronicles this really powerful feeling of loss.  Are you ever wary of explaining a songs’ origin and meanings, in the sense that it might influence someone’s interpretation?

I think “No Words” is quite direct, but, as a music fan, even sometimes when you hear the real meaning behind the song, it still doesn’t change what it means to you. So, I always try and leave it slightly open to interpretation. With my last record, I was maybe a little bit more ambiguous but now I’m a bit more direct. I try not to go into the meaning too much and hopefully the song themselves make it clear what I was feeling.

Your last body of work came out in June 2020. How was it releasing music during the start of a pandemic?

It was really scary and nerve-wracking. At the end of the day, there are certain things that you feel like you need to fulfill when you release music. Stuff like going out on tour, doing press, and you have to do radio and TV and you have to travel. You have to go around in different countries serving your art.

It was very different in that respect and there was this kind of feeling that maybe we should wait. I think that that’s the most productive way of releasing your work because you have to do it in the moment and strike while the iron is hot. Also, I think it’s so important to share music during a difficult time.

I think the whole thing just spurred me on to create the next thing. I’m constantly creating and I think one of the difficulties I faced being with a major record label was the pressure that they put on it being the right thing. When actually no one ever really knows if it’s the right thing. So releasing that music during the pandemic was an important moment for me. I realized that you just have to get your music out there, and not wait for the right moment always.

How different was the creative process and selecting songs for this upcoming album compared to your recent EP?

I think with an album you definitely always want there to be a narrative and like a true message. In an ideal world, I would always try and sort of like enter into a writing process and be like this is what I’m gonna write this album about. Then I’d just write 10 tracks and that’d be it. It doesn’t always work that way. The EP felt like a kind of stepping stone into the record. It was a little bit more varied in terms of experimentation. I tried a lot of things that I wouldn’t normally have necessarily tried.

With an album,  you wanna go into it knowing exactly what you kind of want to do. You need to have an idea of your palette of sounds and exactly what your message is. I think what was different for this album was that it was such a journey to get to it. The way I approached it was like what tracks can I choose to symbolize how chaotic it was to get to the recording stage.

You’ve had some incredible mind-blowing numbers on streaming and still have over 1.5 million listeners. How do you comprehend something like that?

It’s just nuts to me. Hopefully, if I’m creating good work and putting out meaningful art, then it’s going to stand the test of time and be something timeless. That’s always been my intention.

I’m still listening to like Damien Rice and Jeff Buckley. I just think like you’re not gonna stop listening to something just because it’s now six years old. With streaming, there are obviously things that as artists and writers we don’t necessarily agree with about how it all works. But, one of the beautiful things about it is that someone might hear my album from 2015 and it’ll be new to them.

Then they’ll go and put it with songs that came out last Friday; it’s just available to everybody now. I’ve kind of only just fully realized that. I had an old song blow up on TikTok last year and saw there were tens of thousands of videos. I love how that can just happen out of nowhere.

Your first album came out seven years ago. How have all the changes in the industry affected you as an artist?

I’m always trying to think about this because it is difficult. I’m not gonna pretend that I haven’t had times when I’ve been completely overwhelmed by it. My first natural instinct is to create music. When I first started there weren’t loads of platforms so you didn’t have to do much apart from creating the art and tour.

Now it does feel like there’s a lot more that you have to do. It has been overwhelming and it has been difficult, to find the right balance. You don’t want to spend so much time doing it that you forget the most important thing, which is the music itself. I’m very fortunate that I have a really great team of people who help me.

I think you have to find your own way of falling in love with those platforms and find a way that works for you. It can feel like it takes up every single minute of the day but when you take a step back, you realize it’s not as big as you’re making it feel Like you can just do it in small bits and do works for you.

With songs like “Smile” and “Holy,” you’ve collaborated with artists and released music that’s sort of different to your own music. How were those experiences? How did they come about?

Those experiences have been really cool. I wrote so much music during the last few years that’s just ended up in private SoundCloud playlists. You lose track of what you’re doing. But, behind the scenes, there’s always a label person listening to the demos.

Then from there, the label set things up and you kind of just have to weigh up in your head whether it’ll be beneficial. That sort of Eurocentric pop stuff is a lot of fun. It’s been a really good experience and it’s led me into other things. Like there was a remix of my song “Your Soul,” which went really well in Europe. Then that kind of opened the doors to working with artists like Camelphat, who’ve been doing a lot with.

I think the idea of pushing my boundaries and collaborating with people who operate in a completely different space is so exciting. For me, it’s just all about creating and I think to your comfort zone though into a room with camouflage.

Obviously, with the pandemic, it’s been hard to play shows. How’s it been not be performing and traveling in the way that was previously a big part of your life?

It’s been weird. I’ve only just started to think about that again and I’m like, “oh shit,  like what happens if I can’t like do it anymore?” I’m getting all these weird fears and anxieties coming into my mind. I’m just wondering if I’ll be able to sing a whole set of songs I’m gonna have to start really warming up and rehearsing.

I can’t wait to get out there and do shows. I think what I really want to do is just get out there and make it really intimate. I’ve got this feeling that I need to go out and just build it from the ground up. There’s a feeling sometimes that you need to go big or go home but actually, I think there’s a beauty in just stripping it down to bare bones.

In 2018, I did a tour around Asia and just jumped on a plane and rocked up to venues with just my guitar. There were a few hundred people at each show and there’s a beauty in that. Obviously, you want to build it back up to doing festivals with a band but I’m just so excited to get back out there.

Finally, with the release of your upcoming album, what are you most looking forward to?

I’m just looking forward to like being out there again. It’s been so long and I feel very very privileged and lucky to have this opportunity again to put out an album. I’m looking forward to just continuing now just and not taking breaks. The years in between albums one and two were not really intentional. I didn’t really want to have that long break.

I feel like now I just want to create. I feel like I’ve got my head screwed on now. I know exactly what I want to do. I’m already onto album three now. For me now, I’m most looking forward to just being known as an artist again and not the guy where people are saying like, “oh when are you releasing music?”

I don’t want those questions anymore. I want people to just like me living in my kind of artist world with me and just enjoying the music that I share.