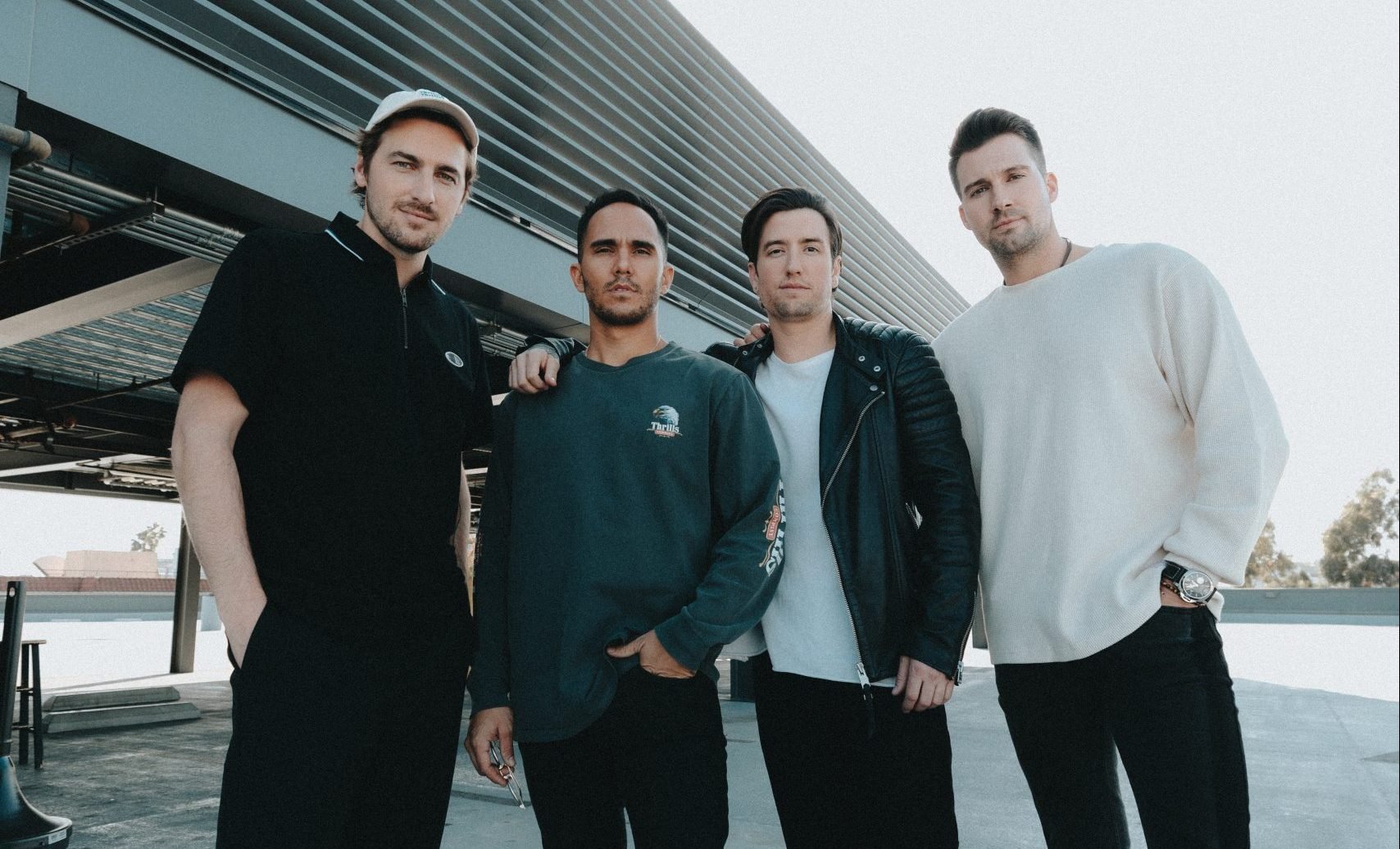 Big Time Rush is back. Yes, that’s right! The very four guys who brought us hits including “Boyfriend,” “Worldwide,” and “Til I Forget About You” are back and ready to start a new chapter. As the saying goes, everything happens for a reason. Kendall Schmidt, James Maslow, Logan Henderson, and Carlos PenaVega never officially called it quits, so for the guys, this return was all about the timing.

“We finished the show seven/eight years ago and for us, it was never the end,” PenaVega says. “We all just needed a break. We went off, I got married and had kids. We always knew we were going to get back together, we just didn’t know when. Pre-pandemic, that’s when the conversation started happening. It was always someone who wasn’t ready and believe it or not, I think it was two months after, everyone was like, we feel good, we’re ready, and it’s the right time! And then the world changed. But, the silver lining was that we had two years to figure out what our sound was, who we were as a band now in 2021 and 2022. It was just the right timing.”

There was also a chance for them to learn and grow. Henderson believes that Big Time Rush is “back stronger than ever now.” With the release of new music, a tour announcement, and music videos, BTR and their fans are ready for a new and exciting journey.

“Call It Like I See It” was the first single that kicked it all off. Following that was the release of their latest track, “Not Giving You Up,” where the band teased their fans with a little snippet before its official release.

“We released a little teaser clip a while ago and people were already excited for it before it came out,” Henderson said while smiling. “This has been a long time coming and we’re so happy it’s finally out!”

“Some people stayed up to hear the song when it first came out,” he continues. “But it seems like the reaction is overwhelmingly positive and everyone seems to like the song. We really like the song a lot so I hope that everyone gets the same feeling we have!”

Practice makes perfect for these guys, though, and they had the time over the past few years to work on themselves and their skills. “I’m still not sure I know anything about songwriting, and every time we finish a song, I’m still blown away that it happened,” Schmidt says. “I will say we have gotten way better and the only thing I can think of is that it feels like a miracle every time you finish a song. When we’re on the same page, things move so much more smoothly, so knowing that we are the four people that we’ll be in communication with, everything else runs as it should.”

It wouldn’t be BTR without Schmidt and his analogies, though, and despite all this time, that still rings true. “I’m so thankful someone acknowledges my analogies,” Schmidt shares excitedly. In fact, PenaVega had a pretty good one to sum up what Big Time Rush is like now, in terms of their responsibilities compared to when they first came together.

“Back in the day with Nickelodeon and Sony, we had a huge machine behind us, a lot of cooks in the kitchen,” PenaVega starts. “But we have now gone through culinary school and we are the cooks, the head chefs and we are cooking up some fire! And as Logan says, these songs slap!”

“We spent most of our 20s on the stages at Paramount,” PenaVega says. “There was one funny moment where we got in trouble for it. Someone hired a truck to give out ice cream, but they were also giving out toys, like little gag gifts. There were little poppers, we got some of those. We snuck up to the rafters and we were dropping it on people. That was so much fun.”

Aside from all the fun and games that the guys got up to while filming the TV show, on the serious side of things, time management was a huge part of their daily lives and something that they were all able to continue to apply to their time as Big Time Rush today. “We were simultaneously filming a single-camera series and then trying to write music, do shows, and do press, so there’s no better education than time management and work ethic than doing what we went through,” Maslow explains. “Now that we’re focusing just on music, of course, there’s still a bunch of things to go through, but we’re all used to having multiple jobs and it’s going quite smoothly.” But now that they’re a bit older and have a better grasp on how this industry works, they’re able to better focus on what’s important: going with the flow. “What we’ve learned is to not be so precious about every melody or every idea as it doesn’t always work out,” Maslow says. “Most of your ideas are going to be bad; just recognize that.”

“There’s one story I have of me and Carlos,” Henderson says. “I like this story because I still remember it. We met this guy called Daniel Bedingfield, and these were some of our first songwriting sessions. When we went in, he said we have to get in the studio to do some melodies. We hadn’t even heard the song yet. We’re jumping into it without knowing anything about the song by just having melodies and certain words flying straight off the dome. I thought it was a cool thing for us to learn. It really showed us to try and go for it full force and some of the magic that happens in the studio is just by being present.”

“I had a new experience with Carlos writing in Miami doing some Spanglish lyrics,” Schmidt says. “I’ve done it in a small way a few times, but I was sitting there thinking, you’ve just got to try. There are really no rules when it comes to songwriting. And when in doubt, just always use ‘Dale’!”

It wasn’t just the BTR fans who were excited for new music, as Maslow explains, but even some of the guys’ friends who just think it’s cool that the band is back together. “I’ve been getting texts from friends who may not always watch Big Time Rush videos, and even they’re saying it’s so great, so fun, and everyone’s doing such a great job,” he says. “It makes us feel good to know what we’re appealing to people our age and our buddies as well.”

With the announcement of a huge tour, they reminisce on the impact they have had on their fans while traveling the world. “A lot of our fans have found some of their best friends at our shows,” Henderson expresses proudly. “There are people who live in the States and people who live in Europe and they maintain these relationships for years and years. We don’t usually talk about that, but that is one of the greatest things we can experience with our fans.”

Big Time Rush will be making a stop at the iconic Madison Square Garden in New York City, which has been a dream of theirs, they say. “From the beginning of the TV show, we said one day we’re gonna play MSG,” PenaVega says. Joining them on the road for the first half of the tour is TikTok star Dixie D’Amelio. “We got to see her perform at The Jingle Ball and I loved that she had a bunch of dancers and choreography,” Maslow says, explaining how they made the decision to bring her along as their support. “So just having that energy will be a nice balance on stage every night.”

On tour, fans can also expect more dancing and maybe laser beams … at least that’s what Maslow hopes for. But regardless, he says it’ll be special no matter what they do. For their stage looks, though, they’ve ruled out an all-white outfit, similar to what they wore in the music video for “Worldwide. ” “Logan handles all of our wardrobes, our in-house stylist, styled by Logan,” PenaVega says with a laugh. Schmidt adds, “Funnily enough, we’ve had that conversation as there are very practical logistic reasons to talk about that while on tour. We’re doing a full-on performance, evidently, by the end of the tour, we just want diverse fashion throughout the tour.”

But before we can truly look ahead to the future of Big Time Rush now that they’re back in our lives, we have to look back to where it all began. “You know what’s interesting, that story is probably different for all of us,” Henderson says about the first time they all met. “These guys had known each other before I joined. There was a pilot episode that was shot and there was a different person in my role. I remember being at the final audition for me, seeing these dudes walk in, and first of all being intimidated because they already knew each other. I picked up a guitar and was playing a Maroon 5 song and we started singing together. But when we all locked eyes, it was just love at first sight!”

There will be no doubt that these four will be making a lot more memories together, whether it’s on the road, recording new music, or meeting fans. Looking back at their time together as BTR, choosing a proud moment was not easy.

“It’s so difficult to pick just one, but I will anyway!” Maslow says, kicking off a trip down memory lane. “We’ve been talking about this for years. We hadn’t toured in years and got to play our first show back, which was technically at Jingle Ball in Philadelphia. Getting to play onstage at sold-out arenas, and having the fans go crazy, we all got off and we realized we missed it more than we realized. It was a bit of a confidence boost as well for us, we haven’t missed a step. In fact, we’re gonna do it bigger and better than we ever have.”

“On a more personal level, there’s a lot of different things,” Henderson adds. “But our friendship is stronger than it’s ever been and the way we work and communicate with each other, we’re doing it in a way we’ve never done before. It’s nice to see that within ourselves. On a larger aspect, just seeing the fans really respond to it just affirms that we’re in the right place.”