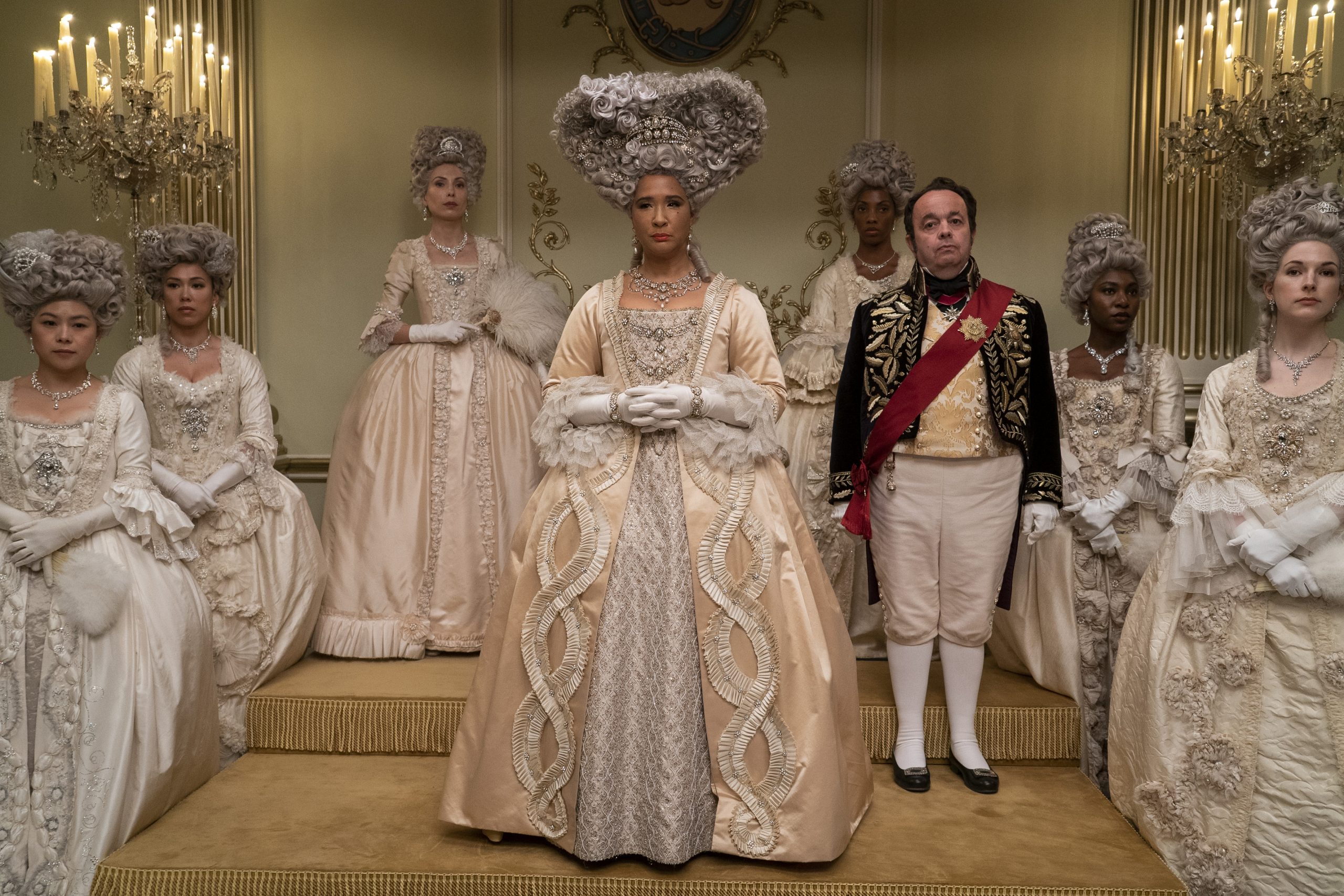 Netflix’s Bridgerton was one of those shows that took the world by storm when it premiered on Christmas Day in 2020. The Regency era show all about gossip, romance, and high society hooked viewers in with its mysterious Lady Whistledown — the town gossip — and made everyone stay with the desperate need to see all the romance play out. But while Lady Whistledown might be the queen of gossip, the actual queen of it all is Queen Charlotte, played by the inimitable Golda Rosheuvel. The Guyanese-British actress spent years on stage and on screen sharpening her skills and her wit to take on this role in the Shonda Rhimes-led show, and she plays it to perfection. Clad in the most extravagant gowns and wigs, Rosheuvel and her feisty expressions steal the scene every time. We spoke to Rosheuvel about coming back together with her Bridgerton family for season two and making her character her own.

I would love to just start with you telling me a little bit about Queen Charlotte’s story in season two of Bridgerton.

Well, we’ve all been resting in the country in the off season and we begin season two with the queen having to find her diamond. That’s the first thing that has to happen in the social season. So we’re on the hunt for that, but also will Lady Whistledown return? I think that’s definitely one of the things that the queen is desperate to know. I think there’s a little play on whether she doesn’t care and whether she does care. I think she secretly does care, but in polite and public society she’s saying that she doesn’t care.

There were really great friendships that were made. We were definitely a family. I always describe the show as being about a single mum bringing up eight children in a society that’s rife with gossip and love and relationships and all the kinds of things that you have to navigate through society. I think all of us strongly think that it’s about a family at the core of it and it’s a family story, so we became a family.

And then coming into season two, it was exactly the same. We were a family, but also so desperate to see each other because we’ve been apart. I had a tea party once every month with Hugh [Sachs], who plays my secretary, Ruth [Gemmell], who plays mama Bridgerton, and Geri [Alexander], who plays Mrs. Wilson, the Bridgerton housekeeper. So the four of us would meet once a month to just check in with each other and have a cup of tea for 90 minutes. It’s a big family. That was how we felt coming into season two.

I want to talk about the grand costuming, the hair, and the makeup of the show. I feel like your wigs got bigger this season.

We went big this season, didn’t we?

How long would it take on a typical day for you to get into everything?

I think if we think about the ball scenes, which take a minimum of three days to film, those were day shoots and night shoots. Something like that would take a couple of hours, definitely to get ready, that’s makeup, hair, and costume. And then I try to have breaks for lunch and stuff, where I come out of the costume because it can be quite intense if you’re doing a full day. Our bodies aren’t used to that kind of stuff. I don’t think the bodies in the 18th century were used to wearing all that.

During shooting and in my normal life, I work out three times a week. I do weight training, and about six weeks before filming, I’d start eating healthy and drinking lots of water because I have to be match fit because it takes a lot of stamina to wear those costumes and those wigs.

I imagine some of the wigs and dresses are heavy.

It depends. The wigs this year were more collaborative. We worked on the structure of the wigs and what material we could use to lighten the load a little bit. Some of the wigs had to have metal structures inside them to be as big as they are, but some of the smaller ones — what I call daywear — were made of other materials so they were lighter for me to wear.

I remember reading that you were pleasantly surprised that they took your own hair into consideration with making Charlotte’s wigs.

I remember being very moved that somebody had taken the time and was really interested in exploring all of that. The braids, dreadlocks, and textured hair, and all that kind of stuff. It’s really empowering for me as an actress to know that the creative team has got my back.

Something I loved about this season this undercurrent of feminism throughout — from Edwina to Kate to even Eloise. What’s your take on that story that’s churning this whole season?

I think it’s really important. I think women are fascinating and amazing storytellers and creators and powerful and queens and all-seeing. There’s some really beautiful scenes with Edwina, especially the one where the two of us are having that dialogue about love after she’s been so courageous and so caring and graceful to the king. That scene for me was really important because I wanted it to be not mother and daughter, not teacher and pupil, I wanted both of us to be senseis, so that there’s a bigger spiritual aspect to the characters. You have a young woman who’s at the beginning of her life, at the beginning of society, at the beginning of trying to navigate society, and who she is. This duet that we play is a real turning point for her and her character and how she takes control of her future, of her journey, of her lane, of her emotions, of her love, of her strength, all of that stuff is incorporated.

These two women are creating an atmosphere where sisterhood is so impactful and so empowering. They’re on the same level, there’s no hierarchy or anything. Completely, they come at it and they speak in a really balanced way. So I think the feminism definitely runs through to other characters and the female energy of the show is really prevalent and really powerful.

There’s definitely more of Queen Charlotte this season, and we saw so much more of her personality. What do you love about playing her?

There’s a line, isn’t there? That I could cross over to make her a caricature, which would be great to play, but I think I’m more interested in being on the edge of that precipice of caricature and truthful, especially with the comedy. Also, there’s this scene with Eloise where the queen comes and confronts her and is really threatening and this violence might happen. We played that scene so many different ways to the extremes. So there is a take somewhere, where you see me being extreme and a villain.

Also, there’s a vulnerability and humanness of Charlotte, and to be able to play her as a three-dimensional character is really important. It would be easy to write a one-dimensional character who wears fabulous frocks and amazing wigs and goes to the balls and wants tea parties and gossip, but you see a human side to her as well. You see a vulnerable side to her, which makes her relatable. She’s at the top of the food chain, but yet audiences are really relating to the character.

Obviously you have source material with the books and the scripts, but how do you make Charlotte your own?

In the scene where the king comes in, I didn’t prepare for it because I wanted it to happen in the moment. But what’s really interesting in that scene is that there were three different dynamics happening emotionally for her. Just as an example, in one take, I, the actress, would think, OK, I’m going to focus on Lady Danbury and Violet. They’re my best mates, they know about it. We’ve obviously had conversations about it. They are my inner circle. The king comes in, how do I feel about that? So I act with the emotions in the moment focusing on that relationship.

The next take will be on the Sharmas, who I’ve got a history with. Edwina doesn’t know what’s happening. The king’s come in, and how do I feel about that? All that stuff is done in the moment, it’s not planned. And then when Edwina has the courage to speak, that’s a whole other thing, but none of it is planned out, it all happens in the moment for me. I think I haven’t really done that before with characters. For some reason, Charlotte really likes that and I do as the actress as well.

Obviously I will learn my words and I prepare in that way, but in terms of playing out the scenes — and I’m really, really lucky that the directors allow me to do that — no take is the same. Obviously if they want me to do something specific, that’s written in the script, and absolutely I will do it, but I’m given free range to create in the moment.

This season of the show is much more understated, almost more romantic with the slow burn, and I’m curious how it’ll be received. What are your thoughts on how this season played out compared to season one?

There’s that tension, isn’t it? Its sexual tension this time round. It goes on for a long time, but then it’s so beautiful when it happens and really sexy I think. I’ve seen the season a couple of times, and if you really look at the sexiness, it’s very simple, but because you’ve had this tension right from the beginning, it becomes an explosion of emotion, doesn’t it?

It’s so beautiful. Especially at the end when all the Bridgertons are together, including Kate.

I love that moment with Daphne, that just single shot with Daphne at the end to kind of link the two seasons together. So clever.

We already know there’s more Bridgerton seasons to come. Do you have ideas of where your story goes yet? Have there been discussions yet?

You’re just going to show up for season three like, “All right, tell me now.”

Yeah, I know. I think that’s exciting because that’s the whole world that she lives in. She doesn’t know what’s happening with Lady Whistledown either. It needs to be fresh. It needs to be sizzling for me, I think. That’s where the honesty and truth comes from. I don’t want to know. That adds to the mystery, that adds to the tension for me.

Do you have ideas of things you want to happen for her?

Nicola [Coughlan] and I have talked about it. There’s a small part of me, because of the respect and the admiration, maybe it’s about sitting down and having a cup of tea and going, “Girl, you put me through hell.” You know what I mean? What were you thinking? How did you do it? How? I think Charlotte would be really inquisitive and have a deep respect for this woman who was everywhere and knew everything.

You get the vibe that Charlotte hates that she doesn’t have the answers, but she loves that this is happening.

Bridgerton is available to stream on Netflix now.