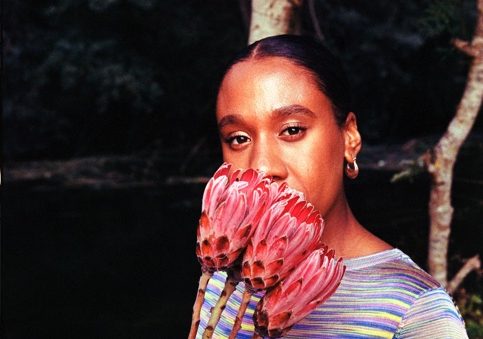 After the recent rise of Joy Crookes, Celeste, and Mahalia, it’s safe to say the UK has been embracing its soulful homegrown talent. A new addition to that list is Mychelle, a stunning new force on the scene who is already captivating listeners through her stories.

Hailing all the way from Hackney, London, Mychelle first debuted as a performer by busking on the streets. It was her raw talent that caught the eye of indie record label FAMM who soon after decided to sign her. Hollywood actor and musician Idris Elba also discovered her the same way and allowed Mychelle to feature on his 2019 Yardie Mixtape. Last year, Mychelle dropped her first-ever project, Closure, which was named BBC Radio 1Xtra host Jamz Supernova’s No. 5 EP of the year and includes her most popular song to date, “Life Isn’t.”

With the new year fully kicked in, Mychelle has just released her first single of the year, “Younger Self.” On Instagram, she credits Charlie J Perry as the producer and the award-winning Engine-Earz for mixing and mastering the track. The beautiful, stripped-back acoustic guitar-driven song blossoms with strings and harmonies towards the end, giving off a cinematic vibe. In addition to the production, her gentle yet intimate vocals draw you close in as if she’s singing an open letter directly to you.

“Younger Self” arrives accompanied by an adorable black-and-white animated video that blooms with a hint of color towards the end.

“I wrote ‘Younger Self’ on my guitar at home. It is a song where I am literally talking to my younger self and helping me navigate my way through love,” Mychelle explained in her press release.

Mychelle tells herself during the chorus: “I know, what you know need / And I was that girl / She is me / And I know you’ve heard this before / Love is a battle so get ready for war.”

After spending a lot of time busking, Mychelle’s first official promoted show was when she was given the opportunity to open for her labelmate and BRIT Award-winner Jorja Smith at London’s prestigious Union Chapel in December 2019. Later this month, she will continue to showcase her talent as a live performer when serving as the support act for another one of FAMM’s acts, Maverick Sabre. The UK and Ireland tour will see Mychelle kick things off in Nottingham on Feb. 24. She will continue into March where she will finish the leg at London’s iconic Alexandra Palace.