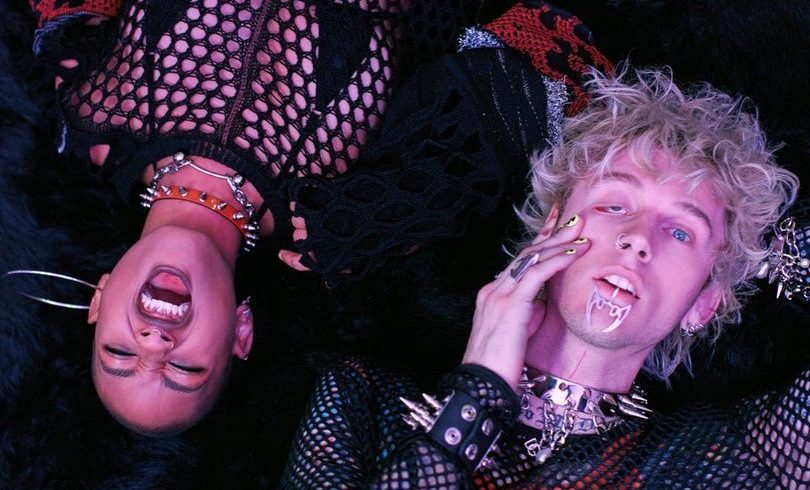 Machine Gun Kelly and WILLOW team up in the new release “emo girl” — and the song is, for lack of a better word, a total banger. WILLOW and MGK make for an ideal emo pairing, both being rockers in their own right. Machine Gun Kelly rose to fame in the mainstream after his hit 2020 album Tickets to My Downfall, which featured certified platinum single “my ex’s best friend.” In the time since the album’s release, he’s shown no signs of slowing down, playing at the VMAs and American Music Awards, as well as collaborating with the likes of Kellin Quinn last year. On the other hand, WILLOW has made a huge splash through TikTok over the past two years. Her track “Wait a Minute!” went viral on the platform in 2019, which was followed by “Meet Me at Our Spot,” similarly rising to prominence on the platform late last year. While she first came onto the music scene in 2010 with “Whip My Hair,” this new era of WILLOW has shown the diversity of her musicality and voice, traits that are more evident than ever in this new MGK collaboration.

“emo girl” opens with a quick matter-of-fact statement: “I am a god,” right before the guitars kick off the track. The opening riff is recognizably Machine Gun Kelly stylistically, with a few simple notes continuously repeated over a heavy bass and drum backing. The opening lyrics, “She’s got makeup by the mirror in her bedroom / thigh-high fishnets and some black boots / nose pierced with the cigarette perfume / half dead but she still looks so cute,” are reminiscent of the early 2000s Warped Tour “Scene Queen” aesthetic. It feels fitting, since Machine Gun Kelly has been undeniably a part of the resurgence of the emo aesthetic and music type, as it’s re-entered the mainstream over the past two years. It’s no surprise that this track would have fit in perfectly being played at the main stage of Warped Tour in the early 2000s.

The song comes to a close with a dueted bridge and final chorus where the two alternate leading the vocals and accompanying one another. It’s a playful back and forth that makes for an engaging finale to the track. While the track is just 2 minutes and 39 seconds in length, the duo manages to cram a ton of energy into a short period. “emo girl” ends abruptly with a raspy exclamation from WILLOW, “Yo, oh my god! Hahaha,” marking a candid and playful end to the track.

Machine Gun Kelly and WILLOW are a pop punk pair made in heaven in their newest release “emo girl.” The track is catchy but still packs a punch with some hard-hitting guitar riffs and edgy vocals from the duo. With the release coming just barely a month into the new year, it begs the question: what else do the two have in store for 2022? It’s sure to be a massive year for both.