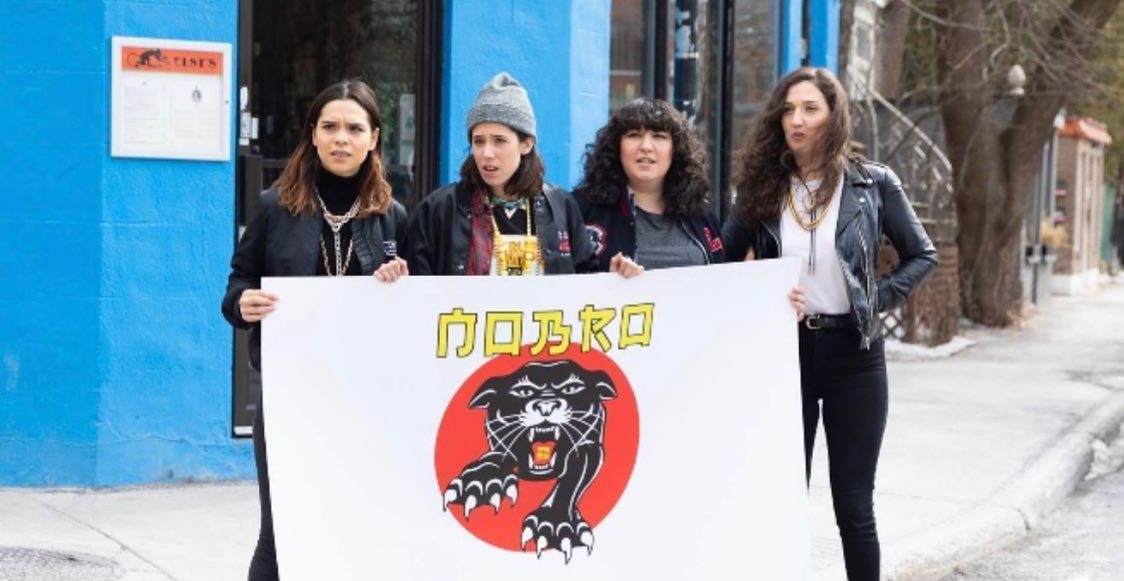 If you like music that holds no bars from the first second to the last, you’ll love NOBRO. The Montreal four-piece could be classed as punk rock, but their ethos is all about challenging these types of categorisations and making music that’s purely their own. Live Your Truth Shred Some Gnar is NOBRO’s sophomore EP, and boy does it pack a punch.

Kathryn McCaughey (bassist/vocalist) founded NOBRO when the aftermath of a relationship with a prominent Montreal musician made her determined to be “more than just a footnote on this person’s Wikipedia page.” She realized she possessed the tools to express herself in her own voice and all that was needed were fellow musicians who felt the same: step forth, Karolane Carbonneau (guitarist), Sarah Dion (drummer), and Lisandre Bourdages (keyboardist/percussionist).

The band’s first 7-inch arrived in 2016, and tours alongside Fidlar and PUP soon followed. It took the band another four years to release their debut four-track EP Sick Hustle in 2020, with lead track “Don’t Die” brimming with the fuzzy, gritty energy that the band possess in abundance. Now, their newest record harnesses catchy vocal melodies and acoustic guitars alongside plenty of NOBRO attitude.

“When I’m listening to music, I just want it f***ing loud,” McCaughey stated bluntly in a press release. “So, I think it’s important for us to offer music that can be played extremely loud and that’s the foundation of all these new songs. The biggest difference between this EP and Sick Hustle is that we recorded each song one at a time, rather than doing all the drum tracks one day and all the bass tracks another day. I think it gives each song a more distinctive vibe.”

Listening to the first few sequences of opening track “Better Each Day,” you’d be forgiven for thinking you’d mistakenly started listening to a gospel record with angelic vocal harmonies and joyous hand claps. But with the deft opening of a can of beer and a quick drum fill, distorted guitars barge their way in and things feel like they’re back in the right place.

“Julia” harkens to Amyl and the Sniffers with its snarly vocals and danceable basslines. The highlight of the EP comes with “Eat Slay Chardonnay.” Just over 90 seconds in length, this is an all-out aural assault with lyrics covering exactly what it says on the tin. The cow bell brings added depth to the track while the blasé “uhh, whatever,” that rounds off the track is a touch of brilliance. “Someone took a picture of me wearing a huge old lady visor,” explained McCaughey on how the song came about. “I captioned it ‘Eat Slay Chardonnay’ and that was all it really took to write that song.”

The grimy, sludgy track “Not Myself” is another highlight of the EP with echoes of Dream Wife making their way into the mix. “Bye Bye Baby” sounds like something a super-charged Patti Smith would’ve brought out in her heyday while closing track “Life Is a Voyage” sees NOBRO take to acoustic guitars for what’s essentially a jam (apparently recorded just in time before the band’s magic mushrooms started to kick in!).

NOBRO have taken a notable step forward with Live Your Truth Shred Some Gnar. Filled with grit, catchy hooks and brazen attitude, it showcases exactly what NOBRO are all about as a band and that nothing is capable of standing in their way.