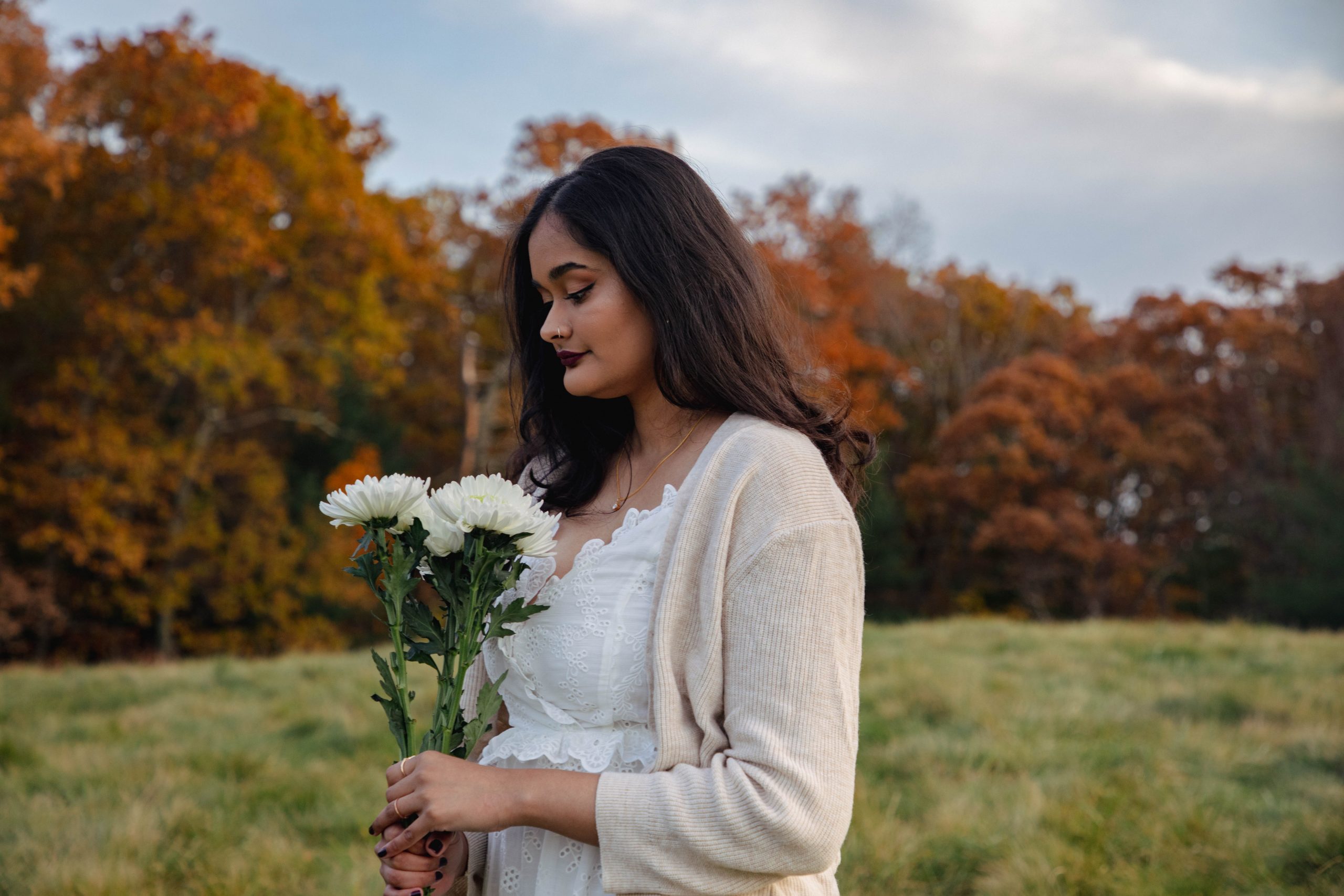 Music runs through singer-songwriter ARAA’s blood. The 21-year-old learned to sing before she could talk, and today, she’s in the midst of studying music therapy at Berklee College of Music and gearing up for the release of her debut EP I Wish I Never Met You, a four-track folk pop EP that emulates the cathartic experience of letting painful situations go, coupled with nostalgic storytelling through music. While she’s inspired by the authentic and honest storytelling of artists like Kacey Musgraves, Sara Bareilles, and Katie Turner, one of her biggest inspirations is her mom.

“My mother was a music teacher who taught Carnatic music, a form of South Indian classical music,” she shares in her conversation with EUPHORIA. “When I was young, she would teach these singing lessons and I would just be running around the house and learned everything informally.” Music was key to her close relationship with her family, especially with her grandfather, who suffered from Alzheimers. “Anytime my grandfather remembered something, it was because of music,” ARAA says. “When he passed away, music helped us mourn and brought us closer together as a family.” That experience inspired her to later pursue a career that involved music and psychology. The idea of using music to help with anxiety and cognitive function really fascinated her.

But creative expression is at the foundation of ARAA’s love affair with music; she learned piano at age 6, took Indian classical lessons, and eventually wrote one of her first songs at 8 years old. She found that songwriting allowed her to express the negative emotions she faced, especially while she attended international school in Thailand. “I was bullied because I didn’t fit Eurocentric expectations and beauty standards, and I think I’ve always seen music as the way to express the bad things that I felt at the time,” she says. ARAA made the decision to pursue music as a career in her junior year of high school and taught herself to play guitar at 17 years old, which became her instrument of choice when writing music later on.

LIGHTS UP BY HARRY STYLES.

Spent an hour learning this after class, hope I did it justice. I love you @Harry_Styles and I’m so proud of you and cannot wait for this new era! ❤️ #LightsUp @Harry_Styles @HSHQ @hsdaily @jefezoff pic.twitter.com/N8nz0ZxGqM

ARAA began the long process of putting her EP together at the end of 2019, the same year Harry Styles noticed her cover of “Lights Up,” the first release from his sophomore album Fine Line. She never thought she would put out her own music for the world but was convinced by her mixing engineer and collaborator Mark Mongilio to record her music. “I was very skeptical beforehand,” she says. “I already had some songs written, and Mark kept asking me when we would record my songs. I eventually agreed to record it and then it just sort of turned into this EP.” Along with Mongilio, ARAA also collaborated closely with producer Noah Rastegar, who helped to bring the EP to life. “Working with Noah was so easy. We always knew what the other person was thinking and our ideas flowed really well. The EP is what it is today because of both Mark and Noah. They understood the direction I wanted to go and they contributed so much to it.”

The first single off I Wish I Never Met You, “What You Need,” debuted in 2020. It’s a special song she wrote during her second semester of college that describes a tough situation she faced the semester before. “That was the first song that I wrote, where I felt that I wasn’t tying myself to that difficult situation,” she remembers. “I wrote it on piano in about 30 minutes, and I realized how much I needed to get that out. I just remember it feeling so cathartic because I was finally able to remove myself from the situation that had happened and it felt like freedom.”

ARAA considers the song “Halfway” to be one of the best songs she’s written. The song reflects on the difficult decision to end a friendship that she tried to previously salvage. “’Halfway’ specifically talks about a letter exchange that I had with my former friend,” she explains. “It was also the first demo I had ever recorded. I remember having the arrangement in my head already, but I didn’t have any egg shakers so I improvised and used little containers full of rice as makeshift egg shakers.” She later wrote the next track “Closure,” three months after writing “Halfway.” The song provided the healing and closure that she needed to let go of that situation, and was the song that solidified her decision to start working on the EP.

For ARAA, the song that really tied her vision for the EP together was “Mrs. Robinson.” Unlike the other songs, “Mrs. Robinson” was written on a whim with her co-writers Mark Mongilio and Diego Cortez. While COVID ended up delaying their work on the EP, she’s nothing but grateful because the extra time allowed them to include “Mrs. Robinson” and made other creative decisions that positively impacted the final product.

With I Wish I Never Met You finally out, ARAA is excited to share these songs with the world. She dreams to continue working on her own music alongside her work in music therapy, with a focus on the geriatric community. While she focuses on finishing up her studies, ARAA plans to take things as they come and continue to work on her music and hopes people will connect with her experiences and message.