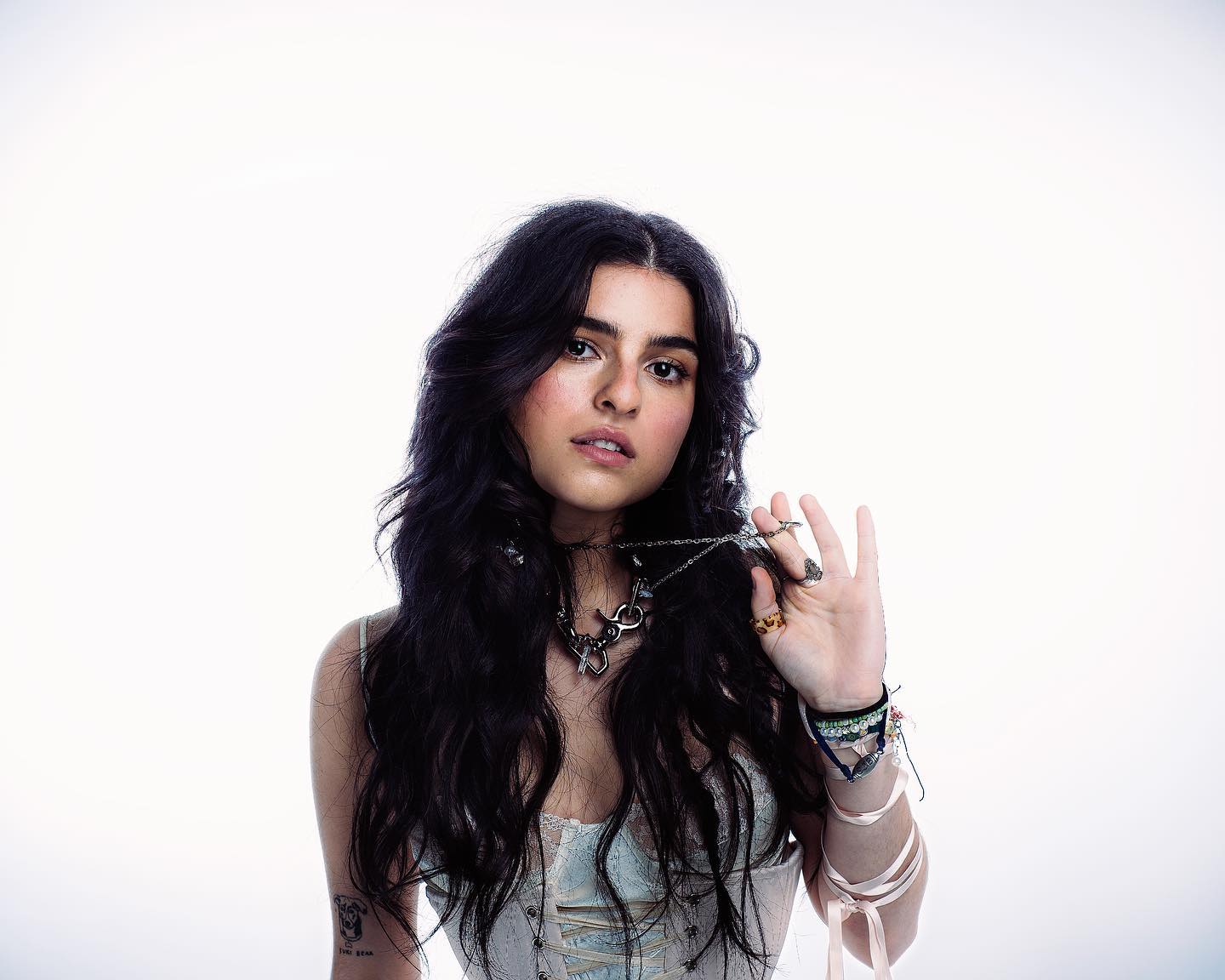 Pop-rock continues to sweep the charts like a tidal wave, leaving behind a slew of grunge-clad artists ready to be added to our rosters. Among the talent pool, 19-year-old renforshort storms the scene with a collection of spell-binding tracks entrancing listeners by the millions since her 2020 debut with teenage angst. At the dawn of a new era sure to establish herself as one to watch, the songstress is reinventing traditional pop music as we know it to fit her own edgy, shameless narrative.

renforshort’s latest release, “mosphit,” came to fruition following various collaborative efforts alongside production royalty Alexander 23 and Jeff Hazin. Recounting the tumultuous end to a relationship, the song uses its title as an ironic metaphor for the sheer chaos that comes with a fizzling romance. If the word “moshpit” gives you major hardcore vibes, you may be surprised to learn the track is actually pop music at its finest. She sings against a lulling beat, “I’m exhausted running on exhaust / It’s getting really toxic being yours / I’m so nauseous and it’s hard to be cautious / Baby, we’re a moshpit, oh.”

In an achievement of the impossible, renforshort provides us the catchiest breakup song of all time. Does the tune feel like salt rubbing in all of our deepest emotional wounds? Yes. Does it still warrant a hit to the repeat button? Even more yes. An amalgamation of mysterious, witty, and authentic, she’s the intriguing enigma music was previously missing.

In an exclusive chat with EUPHORIA., the artist dives into the alluring nature of “mosphit,” the details behind her fast-approaching tour, and why she’s proud to boast a discography that dates back to her early teenage years.

We’re now about two years out from your 2020 debut with your EP teenage angst. How has your music grown since that point?

For everyone I’ve met, there’s been a big change in life in general with the pandemic — and I started putting out music right when the pandemic hit. teenage angst basically came out the week lockdown was announced, so I had had all this inspiration from actually living a regular life.

Those were all songs I wrote before I’d ever put anything out, and there’s wasn’t really that much of an expectation with them. These were songs that I was proud of. This was my high school; I wrote most of the songs in 10th grade. It was just how I was feeling, and all my music is like this, but especially teenage angst. It’s like my teenage high school diary. I think over time, [my music] definitely became more mature, and started to sound a little bit different. Over the pandemic, I’ve moved multiple times, I’ve experienced different things, and I’ve met so many new people that all helped with my music in some sort of way.

I feel like much of your music canonically falls into “pop-rock” in some way or another. What is it that draws you to space?

I grew up listening to a lot of folk and a lot of rock and grunge music, so those were definitely inspirations for me when I started finding my own music. I grew up with Bob Dylan, Joni Mitchell, Nirvana, but there was something so interesting about the first artists I found like Bon Iver and Jake Bugg. Listening to Bon Iver for the first time is a very interesting experience. I grew up listening to folk, there are definitely a lot of elements of folk, but there are also a lot of elements of rock in his music. It’s just so experimental and interesting and that inspired me to mesh genres in a way. So it’s definitely a combination of my parents, what they introduced me to, and what I found on my own that became super formative for my career.

If music could talk, what do you think a song like “moshpit” would say to teenage angst?

I think it would be something like, “Wow, that’s really how that one turned out?” You know? It’s funny because it really is just my life. In music, because it’s so honest, I always write really honestly about how I’m feeling. So teenage angst is when I was so fascinated by this person, “moshpit” is when I’m like, “Oh my God. Get out of my life,” which is crazy!

How do you get into the headspace to write something so vulnerable? Are you a “writing by a piano at 3 a.m.” type of person? Or are you sporadically making notes in your phone that eventually become something amazing?

It’s ever-changing. I find a lot of the time people can expect you to sit down and have these creative ideas in any aspect of being a creative at all. But honestly, I feel like I always get the best stuff when I’m lying in bed or taking a shower. I’ll make up songs, make up melodies, and make up words. Sometimes something will pop into my head and I’ll take my phone and write it down. That’s how it works for me, and then I’ll bring it in.

I’ll sometimes have a session planned in my schedule and I won’t have anything, and I’ll just have to dig really deep to find that — which is also fun! But it’s definitely a really different type of creating. It’s like painting without a muse.

You created “moshpit” alongside Alexander 23 and Jeff Hazin, both of whom have really blown up for their influence on female-driven pop-rock and alt-pop. How was it working with them on the track?

I’ve worked with Jeff since I was 15, so he’s been there from the beginning, and we kind of did our thing together. Alexander I’ve known for a while, but I hadn’t worked with him before! They’re, first of all, incredible collaborators. I love working with them. They’re incredibly talented, so it was all really fun. We weren’t going in being like, “make a more rocky song” — I just let the feeling of what I’m going to write take over. But with this one, it was almost a joke! I was like, “Let’s write a song about a mosh pit and have it be a metaphor for a bad relationship.” And Alexander was like, “that’s actually kind of sick.” So we wrote that, and I thought it was funny because I love doing this with my music — [as in] contradicting the sound with the story. The song’s called “moshpit” and you’re like, “Oh, this is gonna be a hardcore song.” But it’s not, it’s genuinely a pop song. There’s something really fun in that. It’s kind of ironic … and I like that!

When you think of someone listening to “moshpit” for the first time, where would you picture them being to have the best experience?

It’s honestly the same with all my music. I think every artist would prefer for someone to listen to a song for the first time in their car or on headphones because you have to absorb yourself in the song. You just hear every element of the song that you might not hear if it was playing at a party. So driving with your friends, you know? Something very loud.

You said recently in a press release that “moshpit” was about  “an  annoying  relationship  where  you’re  treated  like garbage  and  just  keep  trying  to  get  out,  but  you  don’t  wanna  risk  hurting  the  other  person’s feelings.” Having experienced that, what did you learn from those relationships? What would you say to people currently in that situation?

Life shouldn’t revolve around a relationship. If you find that a relationship is holding you back, pull out and you’ll be sad for a week, at least for me. Eventually, you’ll move on and you’ll find that you, as a person yourself, becomes better and more focused. I was able to focus on myself so much more than I had in that relationship. I put all my time towards that person before, and in my opinion, that wasn’t good for me. I had a lot I wanted to do for myself as well, but I didn’t want to sound selfish. And why would I string someone on if I had these feelings, and then in the future be so unhappy because I didn’t do what I wanted to do with my life?

You’ve been given so many coveted titles from Canadian Apple Up Next Artist to YouTube Trending Artist on the Rise. As you’re rising the ranks and people hear your music for the first time, how would you like people to see you? What’s the message you’re aiming to send?

What my music means and how it’s supposed to make you feel. I think that music is like a language in itself. How people consume music is almost like a reflection of how they’re feeling. So I think being able to pinpoint the category that I would fall under, or the feeling that would correlate with my music is what I want people to think of when they see “renforshort.”

You’re also about to go on tour! Growing from your very first open mic gigs to bona fide concerts, how does the change feel? And what can people expect from a live show?

I’ve always loved performing. When I perform, I go up with just a setlist and only having practiced the songs. I never rehearse my banter, so no banter any two shows will be the same. The dialogue with fans is actually me as a person, that’s actually how I talk — we’re friends! And people have loved that I don’t do that. It makes the show flow in a very organic way and feel very organic.

I think that I just have so much energy. I feel the most comfortable when I perform. It’s funny because I’m a super socially anxious person. Big crowds, that stuff spooks me out. I’ve had that my entire life. But for some reason when I get on stage, it’s like everything changes. I’m like, “Oh, you actually care about what I’m saying!” And that’s something that so self-conscious about in regular life. So I’m comfortable. My live shows are energetic, fun, natural, easy. At least that’s what I think. Hopefully, that’s what people think!