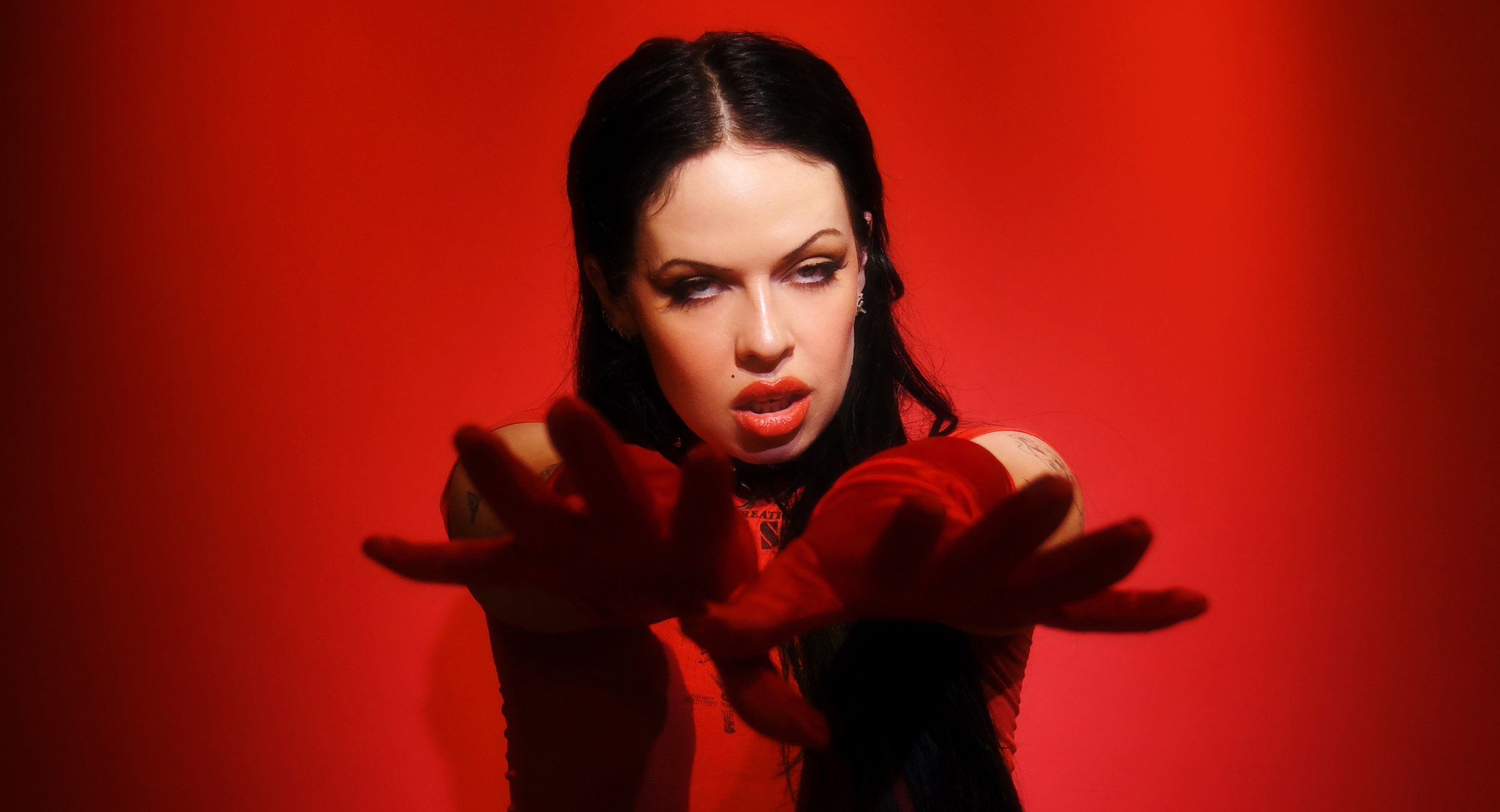 PUNK IS DEAD but Kelsy Karter lives it.

Kelsy Karter is all about punk, even before this resurgence.

As the first single released since her debut album, Missing Person, “Rest in Pieces” is a detour from Karter’s triumphant signature sound that leans toward a combination of classic rock and glam pop. Whether it is the leading hook or the breakdown, guitar stands out even among the thrilling drum arrangements. Above all, Karter’s piercing vocal feels polished and shiny in the company of the thrashing instruments and Goody Grace’s electric but grounding voice. The track perfectly embodies the rhythmic essence of modern-day pop punk and its steadily chaotic nature. But while the track resembles Travis Barker and Machine Gun Kelly upon first listen, Karter had Green Day in mind instead. 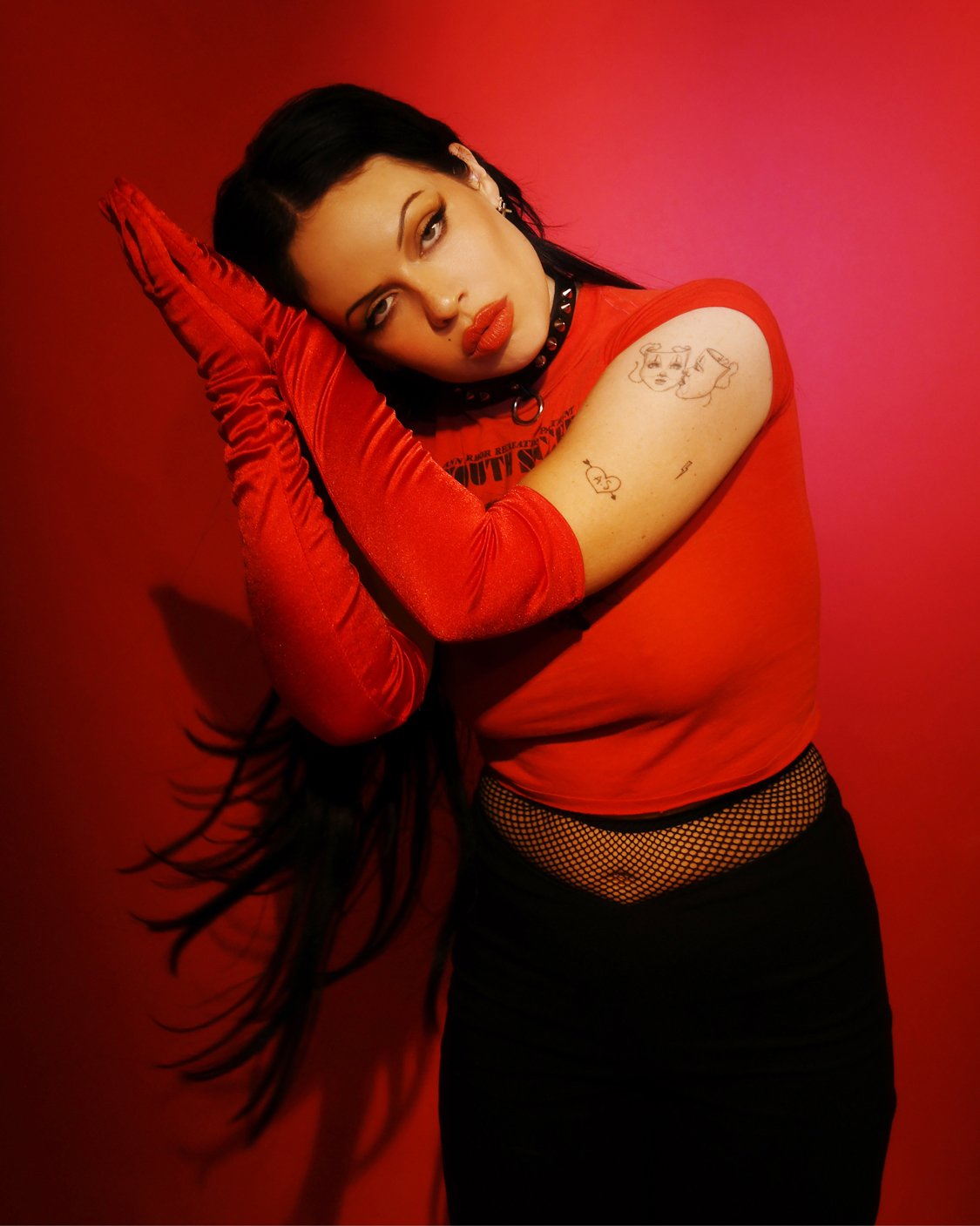 “‘Rest In Pieces’ for me is my nod to [pop punk] because I grew up on those bands and they inspired me, but it is in no way going to be my sound,” Karter tells EUPHORIA. “It’s its own standalone thing, and me nodding to my heroes and dropping the mic then walking out.”

While living in England during the pandemic, a time when things felt bleak and a bit meaningless, Karter wrote out her fearless attitude for love in “Rest in Pieces.” “We basically wrote this song about loving something or someone so much that you’re gonna let it kill you,” Karter says, adding, “And I’ve always been such an extremist. I live my life like [it’s] all or nothing. Whoever is listening can apply that to themselves in whatever way they want to; but for me, it’s about jumping headfirst into everything that I love, or anyone that I love.”

And as a musician, she very much does so. Unlike most artists in The Scene, the pop punk resurgence came as a happy coincidence for Karter — one with quite a bit of frustration as well. Prior to this new wave of pop punk that first started during the pandemic, Karter had already set her mind on reviving rock. In her head, rock as a genre needed to be saved, and punk culture as a whole was already “dead.” 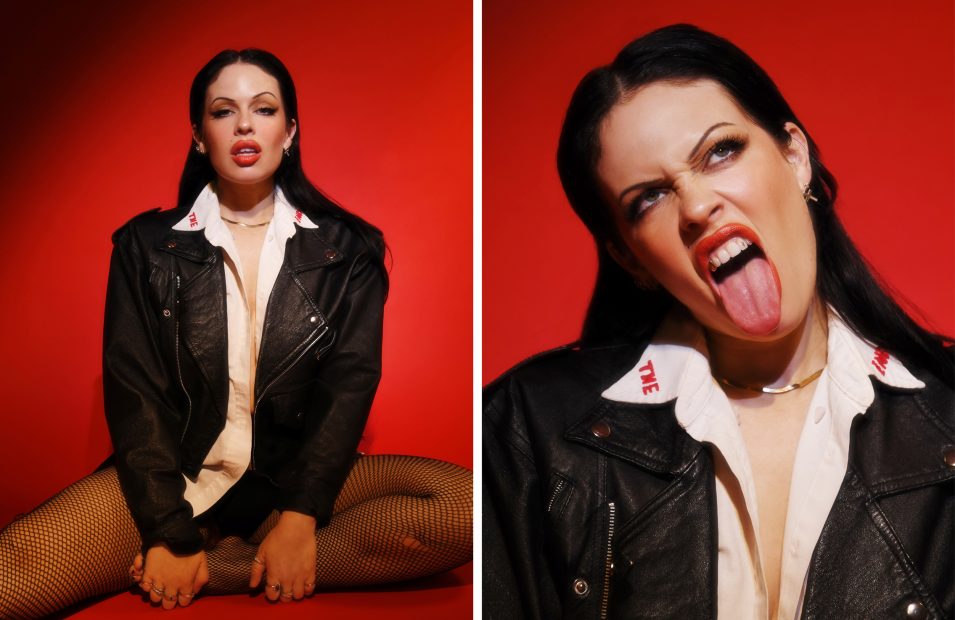 “I was a kid when punk was at its biggest and that inspired me,” Karter says. “But one thing that I’m pretty gung ho about is that punk isn’t a genre. It is a culture, a lifestyle, an energy, an attitude, a way to live your life. It’s not a music genre. And I think that’s what’s pissing me off. The second a subculture becomes pop culture, it’s no longer punk. So for me, the culture [and] the genre, quote, unquote, of punk is dead. It’s already dead because it becomes so popular now.”

With all that being said, the industry is not always a place for free spirits. For Karter to believe that punk is beyond the music and something bigger than the big names in the scene, she has to go to war for her own liberation as an artist. There was, obviously, the infamous Harry Styles tattoo stunt she pulled. For Karter, it was punk to do the unthinkable and tattoo Styles’s face just to promote a new single, though the stunt ended up being perceived as something different for majority of the public. And since then, many seem to misunderstand her on a daily basis, but for the most part, that does not bother her.

When we searched up Karter’s name on Twitter on the day of the interview, a tweet read: “Kelsy Karter is so hot such a shame she makes music for 13 years old who steal cigarettes from her dads,” and the singer simply laughs it off. “I just think it’s funny,” she says, “And yeah, 13-year-old rebel kids fucking love my music and I love that. I think that it’s wrong to put a pigeonhole yourself and pigeonhole your fans. Why can’t we all be fans of someone or some kind of music, and love a song because it’s a great fucking song?”

She continues, “I giggle at that stuff. That does not bother me at all, I’m so used to it now that I’m like, cool, mate, you think I’m hot,” she adds with a laugh. 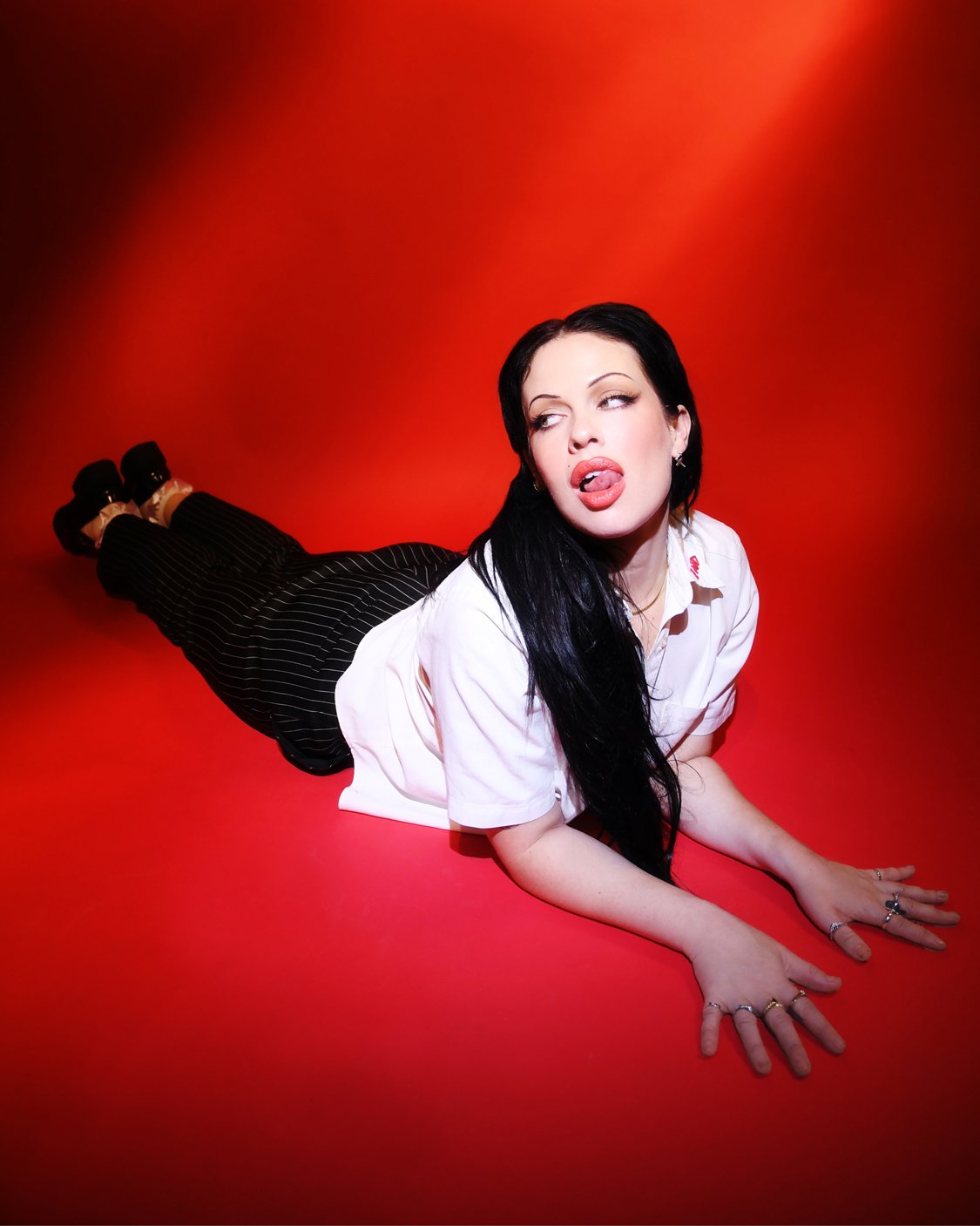 But she does love Styles. The One Direction singer is one of the leading forces in the rock resurgence, despite his take focusing heavily on pop, whereas Karter’s focusing more on rock. “I’ve been a huge Harry fan for years,” she says, adding, “But I think what it was for me was his placement in the music industry doing rock. He did his first album in 2017, again, rock hasn’t been in the mainstream for young people in a long time. So the fact that somebody who I already had adoration for was doing what I was trying to do, that was inspiring to me.”

She also clarifies that she did not say it verbatim that she wanted to be the female version of Harry Styles, despite all the interviews and articles written about her tattoo stunt said so. “He was bringing a style of music that I was doing to the mainstream,” she explains, “I have admiration for doing that, but being the female version of him is not something I want. I am fucking Kelsy Karter. That’s it. Whatever people want to compare me to, that’s fine. But I think it’s OK to be inspired by people and vocalize that as an artist. Because I think that people don’t do that enough. I think that people like to stay cool and mysterious. And I’m like, fuck that, we’re all fangirls of someone.”

“[In terms of] music styles,” she adds, “I want to be the kind of artists like [David] Bowie and Madonna and Lady Gaga. These people that reinvent themselves every time, that’s something that I really, really am passionate about. I’m an entertainer at my core, and I’m going to entertain at all costs.”

Besides “Rest in Pieces,” Karter’s second album is in the making, and one key similarity between the two would be the thrashing guitar. “This next album is so huge in its essence,” she says excitedly. “It’s definitely anthemic and, without saying too much, definitely going back a little bit with some ’80s inspiration, some big women-in-rock from the ’80s inspiration. So I’m very excited about that.” 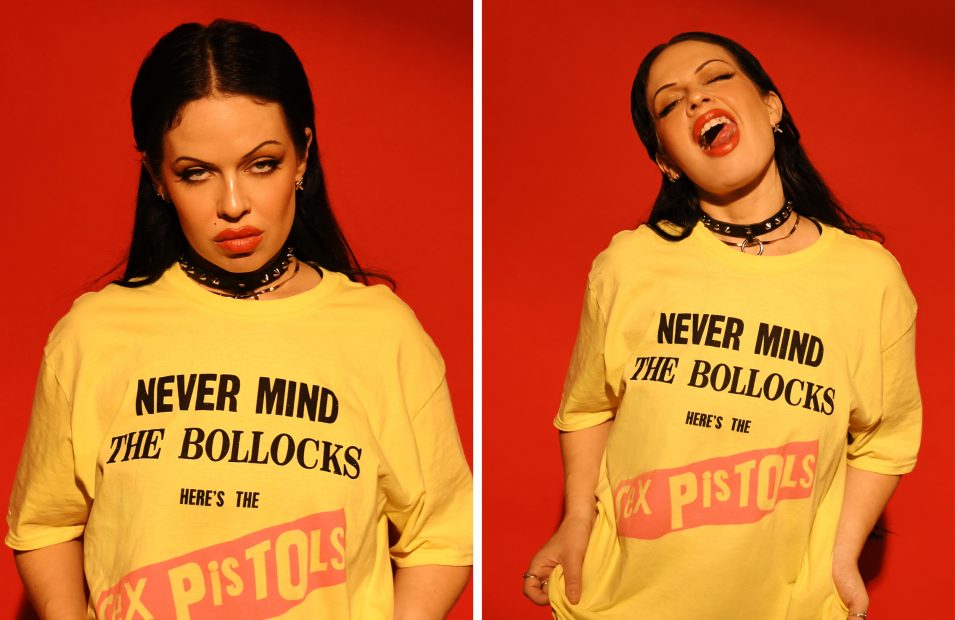 “It’s kind of a rebirth,” she continues, “For me, I think Missing Person was a really dark time. I wrote it and released it in a really tough time. Obviously, the pandemic has been crap, [but] life is life and you have ups and downs. Generally, I’ve never been happier, and the album definitely shows that.”

She reiterates it again and again in the interview, that whether it is Missing Person or album two, she is in a partnership with her fans. “I feel that I have become a big sister to a lot of younger people,” Karter says. “And I’ve tried to bring that into the music. I have been through so much heartbreak and growing pains and all these different things, that we all go through as human beings, but maybe a lot of them are going through it right now. A lot of this new album is me holding my hand out to them, if they needed that.”

And lastly, she adds, “I feel like I’ve found true peace and freedom in who I am and my life, and that’s a hard place to get in. If I can share any wisdom, it’s gonna be through my music and I hope that I’ve done that.”