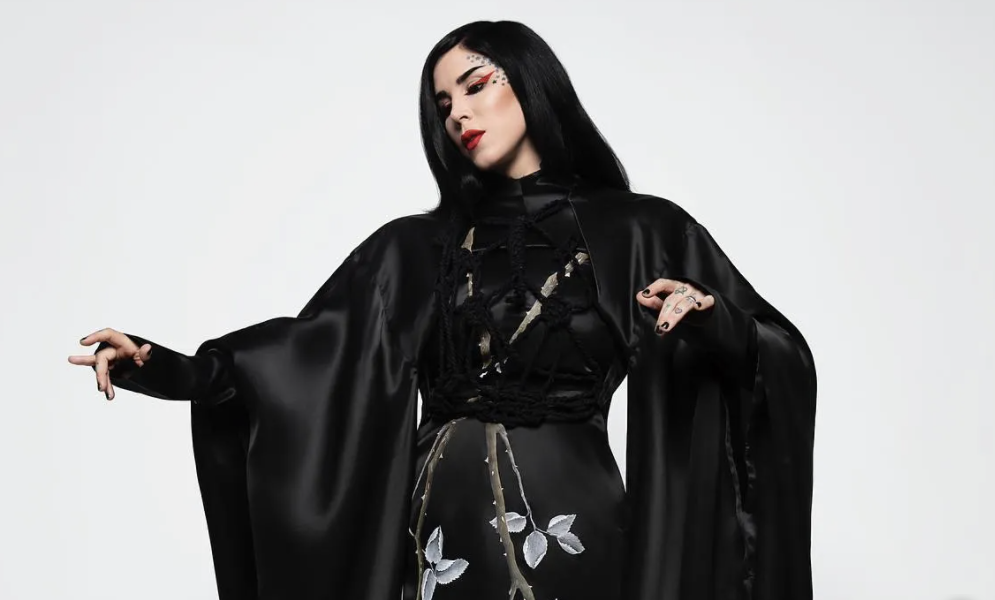 Kat Von D has an absolutely stunning voice. Rich and smooth, it’s the sort of voice that would enhance any genre of music. Though Kat’s debut album Love Made Me Do It is fully goth rock, à la ’80s Depeche Mode, Kat started out playing classical music as a child. “My grandmother actually trained me as a classical piano player, so I’ve always loved music, but it wasn’t until I fell in love, and it was quite a dysfunctional relationship, that I got inspired to write an album,” Kat tells EUPHORIA.

Kat insists  that she is not the right person to come to for advice on heartbreak, but I disagree. Throughout our conversation, she reveals a great depth of emotional wisdom when it comes to love and heartbreak. This wisdom comes across on her album as she sings about regret and codependency and death on such stunning tracks as “Fear You” and “I am Nothing.” Kat is a multi-disciplined artist who started out being known for her tattooing but has since created a highly successful makeup line and toured with fellow musicians for years before finally recording her own album.

“You don’t have to be a one-trick chump,” she says. “You can do more than one thing and you can do it well, it’s just a matter of how much time you want to put into it.” It doesn’t seem like Kat will be taking much time off any time soon. She has already begun writing a follow-up album and is embarking on an international tour throughout the US and Europe. She took the time to chat about the upcoming tour, Love Made Me Do It, and some of her favorite tracks on the album: spoiler alert, they’re all bangers.


Love Made Me Do It is your debut album but you’ve been writing music for a really long time. What got you started? What do you think influenced you to go in that direction?


My grandmother actually trained me as a classical piano player, so I’ve always loved music, but it wasn’t until I fell in love, and it was quite a dysfunctional relationship, that I got inspired to write an album. Writing contemporary music is a lot different than playing classical music and I do think that that was one of my bigger challenges when I first started songwriting was trying to break myself out of that training. But I think that’s a beautiful thing about music is that being a perfectionist is what makes it relatable and what people respond to. As far as the aesthetic or style, I’ve always loved post punk and listened to Siouxie and the Banshees and Depeche Mode and the Cure, so when I started writing my own music, I wanted to do a modern take on the analog synthesizer sound.

You wrote all the songs on the album — can you talk a little about the main inspirations and what goes into your writing process?

We definitely don’t try to necessarily emulate anything. When me and my band create, we try to create our own sounds. Typically whenever I’m writing, I usually just write on piano so it’s a very stripped down situation where it’s just me singing along to the piano and then afterward we work on sound design. Most of my songs can always be broken down to an acoustic version.

You also have gotten to collaborate with some pretty big names in music including Dave Grohl and Peter Murphy. What has that been like? Do you ever get intimidated?

I’ve always been lucky to be surrounded by so many talented people. I always say that I am my friend’s biggest fan. And most of the people that ended top working on the album, I’ve met in some way or other through tattooing. I started writing with Linda Perry and also had Dave Grohl play drums on a lot of tracks and I had met them while I was doing tattoos and talking about music and when I told them I was making an album, they got so excited to be a part of it. So I hate using the word blessed but I feel like I have been blessed with really talented people in my life. All my friends also knew that I have always been really passionate about music so they knew that this was not just a phase.

I don’t know about intimidation, I just always feel like this is amazing, it’s a dream come true and I get to have the honor of creating music with these people, what more could I ask for?

Has it been difficult as a musician dealing with the perception people have of you from LA Ink?

To be honest, for the most part it’s been such positive response to the music that even I was surprised. I was expecting more negative criticism but that hasn’t been the case. Sometimes I will see people saying like, oh you need to stay in your lane or stick with tattooing. But I always felt like one of the most inspiring artists who I’ve been brought up with was Salvador Dali. He was known for his paintings but he also did cookbooks and wrote books on poetry and designed architecture and furniture and jewelry, I think he even had his own fragrance line. You don’t have to be a one-trick chump. You can do more than one thing and you can do it well, it’s just a matter of how much time you want to put into it.

A lot of your songs seem to be about love (disappointment in love, joy in love, etc.). You have said that love is one of your greatest inspirations. In your experience, what do you think it is about that sentiment that drives so many artists to create?

I think that as a former drug addict myself, love is the grandest of highs that you can ever reach. At the same time though, heartbreak can also be just as euphoric. Of course those things are going to be inspiring in some way or other. I don’t know how to write a happy love song even though I’m happily in love now. My go to is melancholy which I think is something very natural. You can’t have the light without the dark. People respond to that and I think that is why there are so many great sad love songs.

You mentioned that your track “Fear You” and the video that goes with it are meant to explore violence in a therapeutic light. I would love to have you expand on that because its such an interesting idea!

“Fear You” is about wanting something so badly but being too afraid to make a move. And  what a sad thing a missed opportunity can be, like if only we had the courage to act on what we felt. At the end of the day we can break our own hearts better than anyone else and thats what that song is all about. When I did the video, I wanted to convey the sentiment of violence without actually being violent towards anyone. Going out into the middle of the desert and breaking a bunch of glass, what is more therapeutic than that?

Do you have any great memories from concerts you’ve been to? What makes a great concert vs. a dull one?

I have toured with a lot of friends in the past prior to going on tour for myself. It’s always different when you’re going to be singing your own songs and creating your own production. I’m such a huge fan of a great performance, I love it when you go and see a band play and they put effort into everything from the state costuming to lighting and visuals and so I believe that storytelling is such a huge component of a live performance. With our band we really work hard at our musical performance as well as the stage show . We film vignettes for each song that are played on these giant LED screens. There is something to be said for people bringing it because one thing I hate is going to see a band play and it’s just a guy standing at a mic. It’s like I could have just stayed home and listened to the record.

“I Am Nothing” sounds like it comes form an experience in an emotionally dark relationship. What advice do you have for someone going through that? Has your music provided a sort of catharsis?

“I Am Nothing” to me is just that feeling of not being good enough, and wanting so badly to be good enough for someone and it’s also tipping my hat to the codependency that I’ve struggled with in past relationships. I think that song out of all of them is very close to me and anyone who can relate, my heart just goes out to them because when I wrote that song, I want in a very dark place. That’s the thing about love: it doesn’t care who you are or who you think you are, it’s going to effect you just like anyone else so no one is immune to heartbreak. I used to always hold onto the hope of true love even when I was in a terrible relationship with people who didn’t love me. That’s important too though, maybe not to stick around and try to make something work that won’t work but also just to not get jaded and bitter. If one person treats you badly, it doesn’t mean the next person has to. We can’t punish the next person for our past relationships, and that is a hard lesson to learn sometimes.

What’s next for you musically, artistically, etc.?

We’re already writing albums number two right now so the plan is to go on this US tour and then we have a few weeks break and then we go to do the Europe leg of the tour and then we can come back we go right back out into he studio and put out another album and do it all over again. Right now we’re just really excited to get back out on the road. We’ve been waiting during the lockdown and everything just to make sure the time is right and now it feels like everything is lining up and we can play for everyone live!