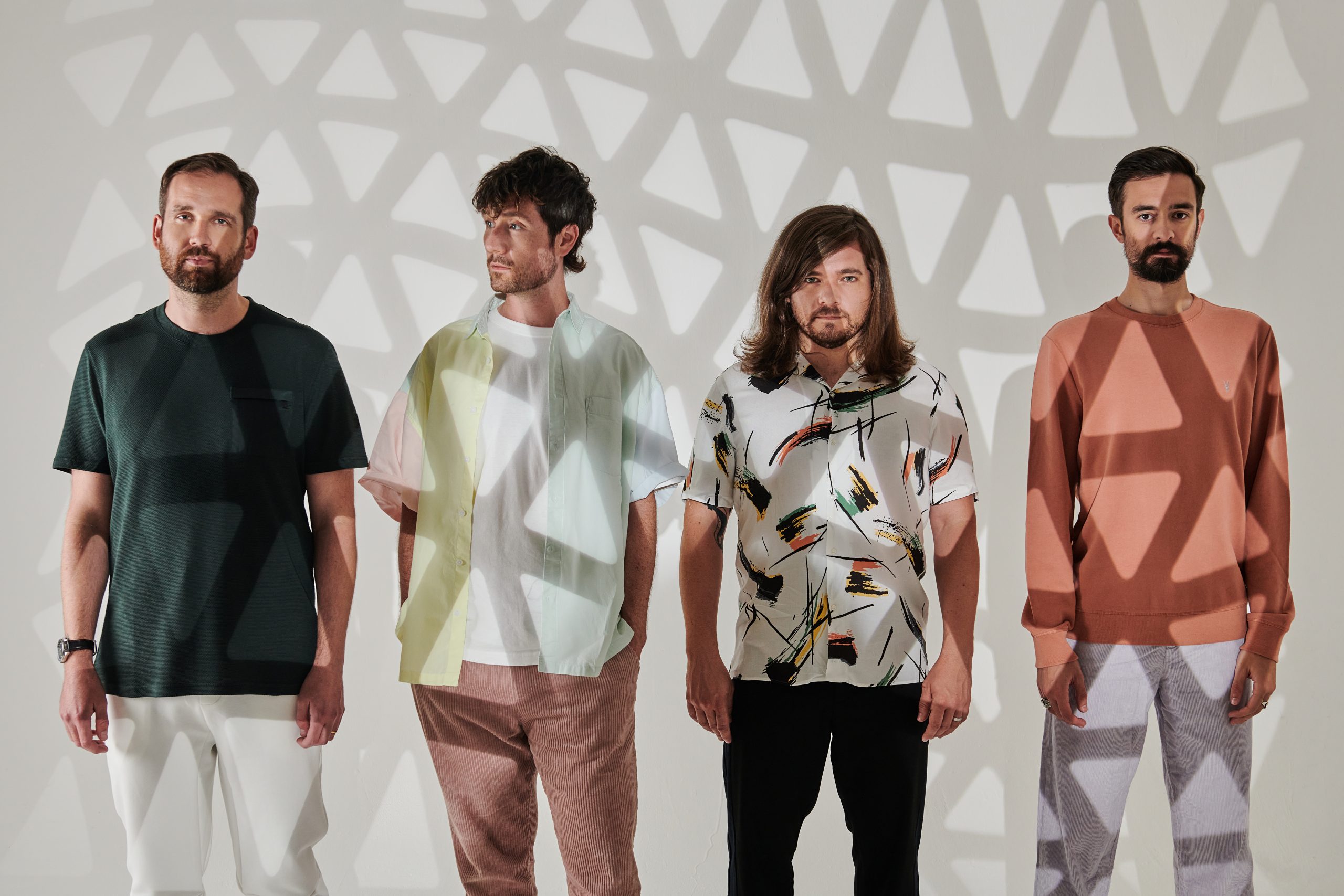 A not-so-distant future where people turn off their minds and escape to dreamland via a technological device glued to their temples, where robots are eerily human-like and neon lights fill the skies, where screens and eyes are interchangeable. That’s the backdrop of Bastille’s fourth album, Give Me the Future, out today.

Bastille have never shied away from creating universes to live within their records: sophomore album Wild World follows a multimedia conglomerate, WWComms, and its relationship to politics, fake news, and the current state of the world. Coincidentally, or maybe not so much, Wild World was released in September 2016, months after the Brexit vote and days before Donald Trump was elected president of the United States.

Their follow-up album, Doom Days, was set within a single night. Hedonism, escapism, hope, and euphoria are the album’s main themes, with Bastille looking for release and a boost of serotonin to live through reality. Reality, the album said, was difficult to tolerate and finding an escape in the physical world wasn’t enough In comes Give Me the Future, which looks for distraction and connection in technology.

The album is vast and packed with new sounds, synthesizers and club-ready beats exist in the same universe as a string section, horns, and spoken word. There’s an equal amount of thrill and fear of technology, and the desire for human connection speaks loudly, until it’s tuned out by the possibility of shutting off your brain and getting lost in a fictional, tech, and algorithm-powered lucid dream.

Dan Smith, the singer and frontman of Bastille, explains the nuances behind his relationship with technology: “There’s no such thing as tech is bad or tech is great. It can be amazingly unifying and inclusive and empowering. But it can also be hugely divisive and confusing and it can make you feel awful about yourself. But it can also make you feel great about yourself. And it’s totally addictive, but also totally vital in so many ways.”

“Distorted Light Beam,” the album opener, pulls the listener right into anxiety. It pulses, transports the listener into the ecstasy of a technological fantasy. “Feeling like if this is life / I’m choosing fiction,” Smith sings with determination, and as he travels into his dreams, the listener follows. Fast-paced and frenetic, “Distorted Light Beam” buzzes with energy and is a huge statement as an opener. The desire to escape is continues on “Thelma + Louise,” of which Smith says, “If we could plug in and go anywhere, why the fuck wouldn’t we be Thelma and Louise flying down the highway, wind in our hair, in that amazing, iconic feminist classic?”

It’s among this AI-powered background and born out of this immense desire to escape reality that Bastille delivers one of their most intimate and personal songs yet. “No Bad Days” tells the story of Smith’s aunt who, while undergoing cancer treatment in Australia, opted for assisted dying. “I didn’t think about writing that,” he says. “I never would have had that experience and thought, ‘Right, I’m gonna write this song about my aunt and that whole experience,’ but it just kind of fell out.” Rather than grief, “No Bad Days” brings hope and relief to the listener. Smith celebrates the end of suffering and highlights courage and liberation and the end of the bad days “in honor of how fucking incredible she was.”

The video of “No Bad Days,” however, dives deeper into a world distorted by technology. In it, Smith, who also served as director for the first time, tries to bring a person back to life by feeding his memories with that person into a robot. “I’m fascinated by now, if you lose someone because they passed away or a relationship’s broken down, the way that life is now we have thousands of photos, videos, memories, voice notes, and everything,” he says. “It can make being able to let go of someone so much more complicated.” In a reference to Ex Machina, the robot comes alive, but the outcome of that story is one Smith prefers to leave in the air.

“Back to the Future” and “Plug In…,” which follow “No Bad Days,” are high on technology and paranoia. While “Back to the Future” craves virtual hyperreality and that unique adrenaline, “Plug In…” throws you into technological bad trip, with lyrics that serve both as warning and reminders of the fragility of human nature: “Ice caps’ll fall / Cali’ll burn / Willful denial until it’s my turn / Bunch of old white men / Who don’t give a fuck / Are we having fun yet?”

At the end, there’s a simple plea: “Tell me we’ll be alright, say that we’ll be fine.” And at this moment, where we find ourselves as vulnerable as ever, comes what’s possibly the most heartwarming and emotional moment of the album, “Promises,” a spoken word written and read by musician, actor, and activist Riz Ahmed.

“I felt like the album needed a moment of calm and a moment of humanity,” Smith explains, as he talks about getting Ahmed on the album. Bastille sent Ahmed the album, a summary of what they were looking for, and let Ahmed run with it. “Promises” is the quiet and beautiful result, where Ahmed opens his heart to a lover and promises love, even if he can’t promise a future: “Babe you were my best lay and i never / planned to hold hands / ’til the whole of human history aligned so we / could slow dance.”

Bastille were thrilled with the result. “I think it really perfectly sums up so much of what it is to be a person and a person in relation to other people, but in the context of all of this technology, and all of this crazy futuristic shit that we live in amongst and have to grapple with every day,” Smith says.

Give Me the Future oscillates between anxiety and freedom, escapism, and the present moment, living and dreaming, and it never gives us a right answer. Rather, the songs were built for dancing and reflection — what Bastille call a “Trojan horse, making music that feels kind of upbeat and grabs you initially, and then, as you let the lyrics get under your skin, you realize that they’re not all smiley faces.”

Other than tricking their listeners into moshing while screaming about climate change and the eeriness of machine learning, Bastille also refrain from giving us an answer because, ultimately, they’ve not yet found one. “In making this album, we wanted to explore the fact that you turn on the news and see how different communities around the world are being affected negatively by climate change, then you change the channel, and you see loads of people denying that climate change even exists, and it’s fucking insane,” Smith says. “But then also, there are these incredible inspiring activists, thought leaders, scientists, and researchers who are doing everything in their power to try and open people’s eyes and redirect the course of humanity to somewhere a bit more positive.”

It’s within this dilemma of whether we’re doomed or potentially being saved that Bastille closes the album. “Future Holds,” featuring BIM, is one of the only songs that’s comfortable with the uncertainty: “Who knows what the future holds? Don’t matter if I got you,” Smith repeats. Gone is the anxiety and the fear, giving way to connection and solace, however that might come. There’s no answer to what the future holds, but living it with people who get you and will hold your hand when you can’t make any promises makes whatever comes next be worth it.