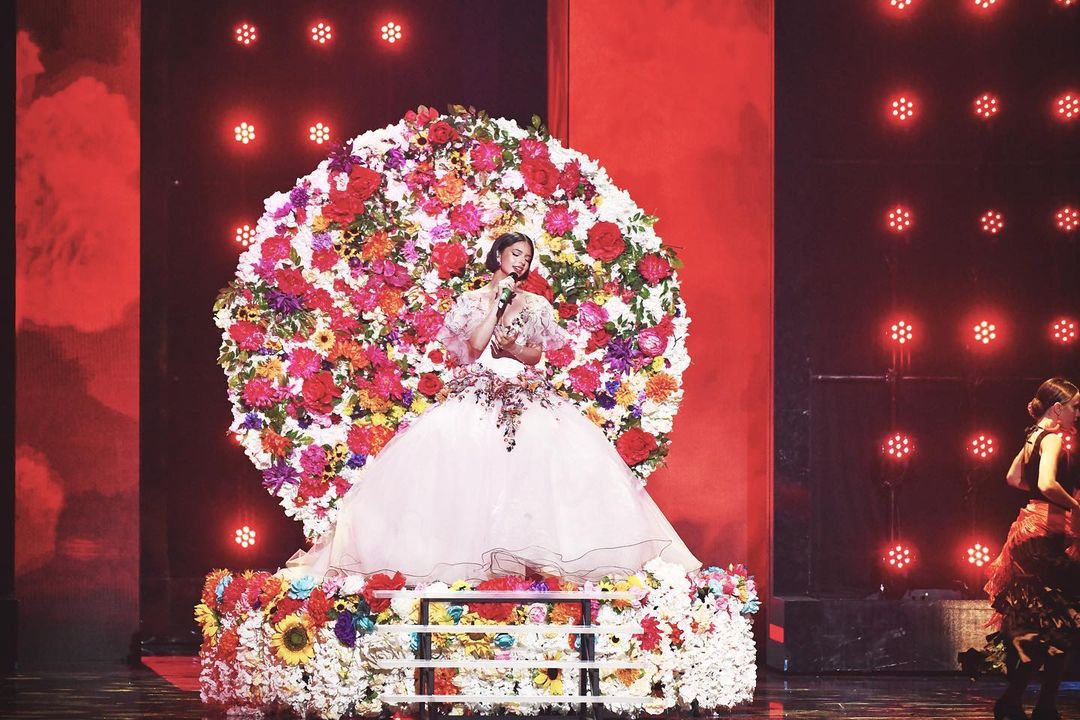 Last night’s Premio Lo Nuestro Awards took place at Miami’s famed FTX Arena in the heart of Biscayne Bay. The annual event celebrated the best in Latine music across genres. Along with the exciting awards, the attendees did not disappoint with their style. Keep reading to see our roundup of the best dressed.

Colombian pop singer/composer Sebastián Yatra (singer of Encanto’s “Dos Oruguitas”) showed UP to the FTX Arena, flying in just hours after opening his sold out Dharma Tour in Mexico City. For his red carpet look, Yatra was clad in a light blue Boss three-piece suit, which, in true Yatra fashion, was worn without an undershirt. He paired the suit with Christian Louboutin shoes. Yatra was the winner of Pop Collaboration of the Year for his hit “Pareja Del Año” with producer Myke Towers.

Fresh off of the release of her new album, Mal De Amores, singer Sofia Reyes brought a funky twist to Biscayne Bay. For her performance, the Mexican pop darling chose to sing the pop track “Palo Santo” off of her new album. Her look was a ’70s-inspired delight that consisted of a bright magenta two-piece velour suit with silver chain detailing. She accessorized the look with silver rings and bracelets, oversize Elton John-esque glasses, and a corresponding magenta feather boa.

Actor and singer Maluma made a statement with his look last night. He was joined by fellow Colombian artists Blessd and KaplayyMilky to accept his award for Global Icon after the four performed. They each wore a white shirt that read, “Medallo on the map, More Music, Less Violence” with pants. Medallo is a nickname for Medellin, the capital of Colombia, and each of the group spoke out about the “narco culture” present in their home country and how they plan on counteracting the violence with music education.

Venezuelan actress, singer, and content creator Lele Pons may have attended the Premio Lo Nuestro awards to present one award, but her look definitely commanded the room. For the event, she was dressed in a stunning Tony Ward Couture look: a lime green bandeau-style top, a larger-than-life lime green floor-length maxi skirt, and long green opera-style gloves.

Mexican actress, model, beauty queen, TV presenter, and Premio Lo Nuestro co-host Alejandra Espinoza entered the FTX arena in a look fit for a princess. Though she had many outfits throughout the night, her red carpet look is arguably the most stunning. She wore a white-gold strapless gown that featured a sort of liquid effect on the fabric, by designer Rubin Singer.

Natti Natasha brought the couture to Premio Lo Nuestro! She was already expected to dominate, having seven nominations and performing her hit “Wow BB” with Chimbala and El Alfa for the first time on TV. She took the red carpet in a stunning Balenciaga knee-length dress with draping around the neck and collar and a long black train.

Angela Aguilar, an up-and-coming regional Mexican artist, had quite the night — leading the tribute to the late regional Mexican singer Vincente Fernandez and winning Best New Female Artist (which she celebrated with an empowering speech about the disparity of women in the genre). She performed the classic song “La Malagueña” in one of the best looks of the night — a stunning white tulle dress with a flowing skirt and bodice and embroidered flowers on the collar.