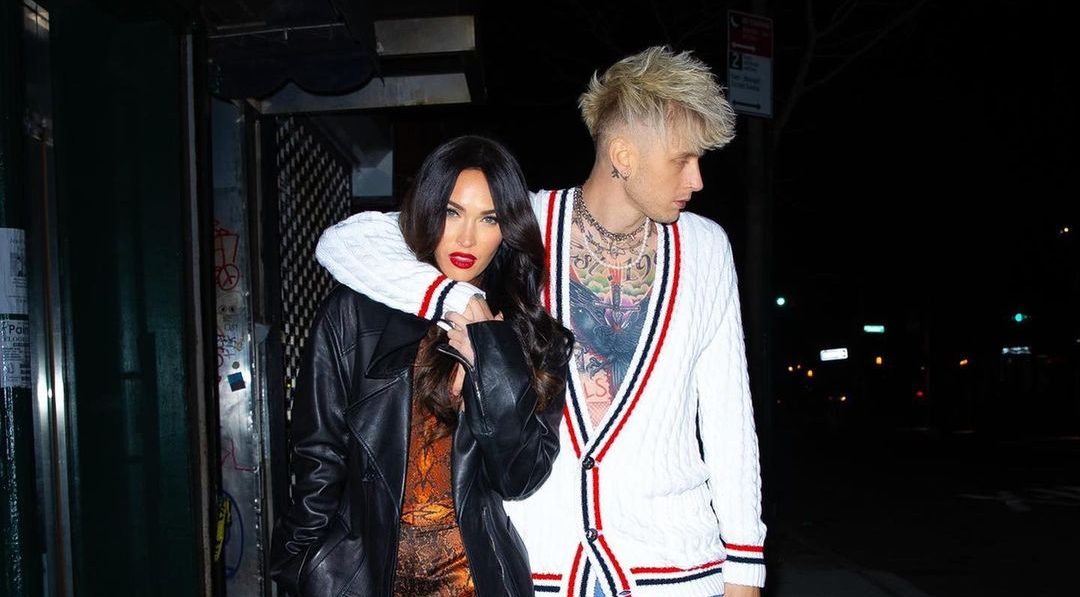 Within the last year, you’d have to be living under a rock to not hear about the phenomenon that is the coupling of Megan Fox and Machine Gun Kelly. This pairing goes far beyond just another perfectly manicured match-up between two stars for the sake of publicity: Through the couple’s bold and exciting expressions of self, we see MGK lean into a more high-fashion and creative artistic vein, and in turn, Fox’s unapologetic expression of sexuality, truly feeling comfortable in her body after spending years being objectified, ridiculed, and humiliated for it. Besides, judging by their Instagram captions, it seems like they’re soulmates, or at least, deeply in love.

Paired with the creative direction of renowned stylist Maeve Reilly (whose other clients include Lori Harvey, Dixie D’Amelio, and Hailey Bieber), Fox and MGK will go down in fashion history as bringing back the edge to high fashion, while continuing the modernist trend of counterculture expression. Here’s a roundup of the gems within their aesthetic journey: from the two iconic Mugler catsuits to a peek at the couple’s off-duty looks.

MGK and Fox stepped out in what is the best visual representation of their relationship at the launch of his nail polish brand, UNDN LAQR. He wore a black shimmering suit jacket and trousers sans undershirt with a heavy silver chain necklace and a pink nail polish. Fox opted for a thigh-length black blazer dress with lace detailing and a chain chest necklace. The true pièce de résistance of the outfit is the thin silver chain attached to both of their pinky nails, always tying together the self-proclaimed soulmates.

The couple appeared together on the red carpet for the 2021 MTV VMAs, where MGK was nominated for Best Alternative Video for “My Ex’s Best Friend.” He was glad in a red sparkled suit from head to toe and clad in the color of the carpet itself, seemed to fade into the background and allowed Fox to have her moment. Fox wore a flesh-colored Mugler dress, which was corseted at the top and skin-hugging toward the bottom. The dress featured crystal detailing in small waves across the width of the dress and a bedazzled thong.

For the Billboard Music Awards, MGK and Fox took home the unofficial title for Most Talked About Look. He took a similar fresh take on a suit with an oversize white undershirt paired with a black oversize blazer and tight black suit trousers. Fox, on the other hand, stunned in her second Mugler look (a partnership that is heaven-sent), this time a black cutout skinsuit with a sheer skirt covering, paired with black peep-toe heels. This style of look created a trend, with the likes of Lizzo, Billie Eilish, and Doja Cat going on to later wear similar Mugler catsuits.

While MGK and Fox are known for and have, time and time again, dominated and commanded attention of every single red carpet they set foot on, the couple have also demonstrated that off-camera there is a true and deep connection between them. This look made it onto the list because it shows Fox and MGK in their off-duty look, when they’re not dressed for cameras and instead only have eyes for each other. MGK is wearing a black bomber jacket paired with gray sweat pants, while Fox is wearing a matching printed set of a cropped gray sweater sweatpants with black sneakers.

Another one of Fox and MGK’s off-duty looks, this one a bit more coiffed, sees the couple in an embrace while leaving the iconic SNL stage, where MGK performed his songs “lonely” and “my ex’s best friend,” and virally tried to pick up Pete Davidson, causing the both of them to fall off of the stage. For this cuddled-up moment, Fox wore an orange and black snakeskin pants and blouse with a long leather coat, while he wore a white cardigan with a red and black striped collar outline, jeans, and black sneakers.

Fox and MGK stepped out for their first public outing as a newly engaged couple earlier this year. After their romantic getaway to Puerto Rico, where their engagement took place, the couple flew to Milan, Italy, to attend the Dolce and Gabbana Men’s Fall/Winter 2023. Fox wore a black teddy lingerie top with leather pants with criss-cross lace-up detailing down the sides and a silver fabric belt. He wore a top and pants ensemble in bejeweled pearls and bright shimmers, with silver bedazzled shoes and fingerless gloves.