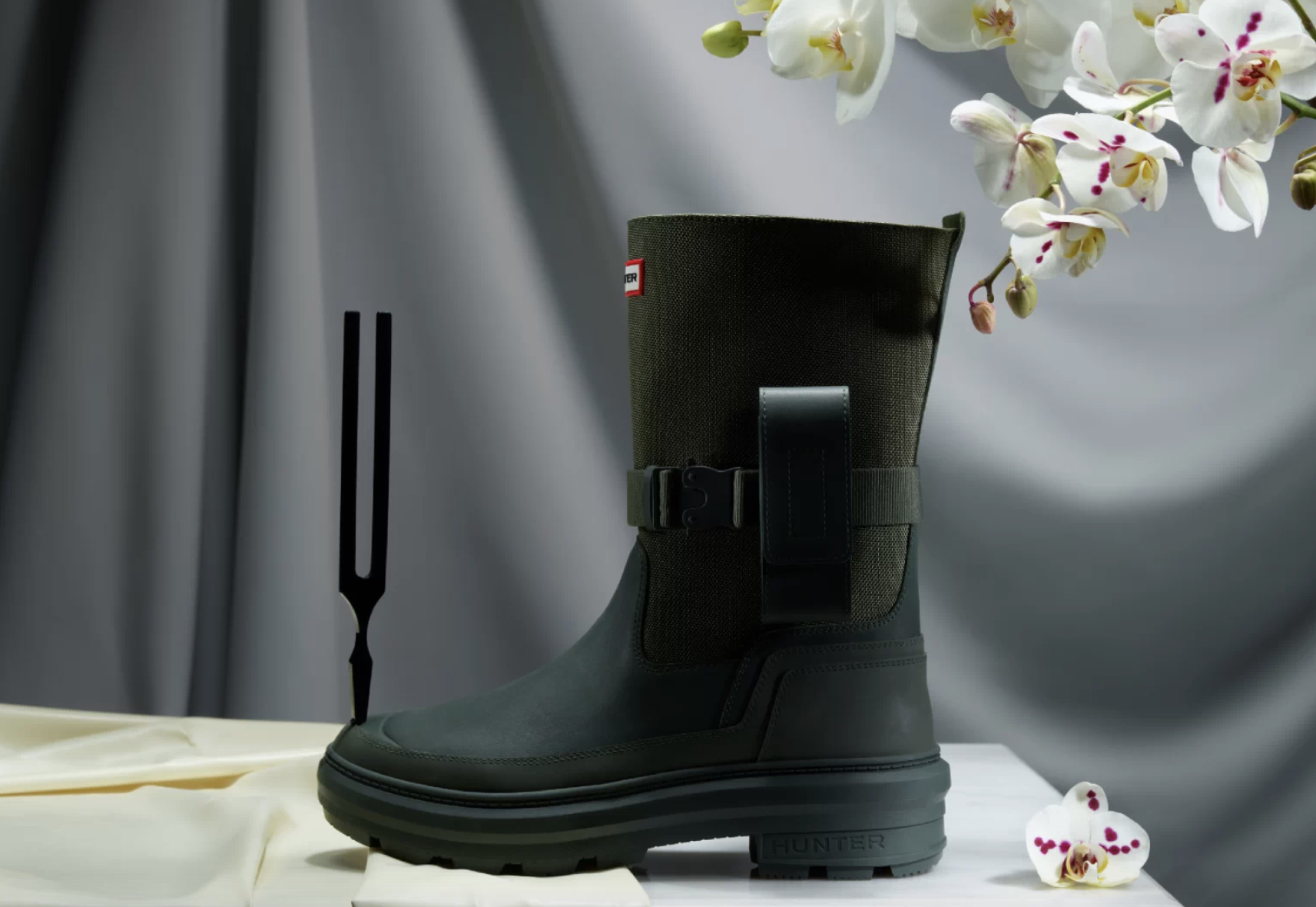 Hunter, the boot company famous for creating the world-famous Wellington rain boots, has recently gone through a trendsetting update. The likes of Kendall Jenner, Ellie Goulding, Sarah Jessica Parker, and Tina Fey have all been spotted on a rainy day enjoying the comfort of a pair of Hunter boots. Now, the brand has gotten an almost sinister revamp, with the release of its newest collaboration with the hit show Killing Eve.

Killing Eve, the thriller TV show starring Jodie Comer and Sandra Oh, centers on an MI-6 agent, Eve (Oh), who is tasked with killing the notorious assassin Villanelle (Comer) in the ultimate game of psychological cat and mouse. The show, which has produced some of the most viral fashion moments of the past decade, has been nominated for BAFTAs, Emmys, and Golden Globes.

The collaboration between two titans of their respective industries was first teased by Instagram account Deux Moi, where an anonymous submitter sent in a tip that a fan-favorite brand would be collaborating with a critically acclaimed show for an unexpected collection. Now, months later, it was revealed that the insider’s prediction was hinting at Hunter x Killing Eve.

The Killing Eve collection is a limited-edition capsule that will feature two brand-new designs for the brand. The Hunting is a chic, mid-calf style boot inspired by the show’s fashion-forward Villanelle, which is available in Black and Olive colors. The boot has a leather foot setting with a nylon upper and a removable ankle strap and pouch. The Chasing is a knee-high style rubber boot, which is available in Black, Olive, and Camel colors.

The designs of the boots themselves portray a hardened and utilitarian style that seamlessly blends practicality and fashion — both suitable for the outdoors and for standing up to your arch-nemesis turned lover in your old favorite spot.

Hunter’s boots are committed to using the highest quality materials. All of the boots are created using a waterproof Stetson leather for the outer shell, a light natural rubber for the sides and bottom, as well as a recycled ballistic nylon with a recycled vegan shearling lining. Both styles are finished with Hunter’s new chunky high-grip sole made from FSC-certified rubber.

Paolo Porta, chief executive officer of Hunter, said of the collaboration in a press statement: “We are incredibly excited to be collaborating with the cultural phenomenon that is Killing Eve, marrying our utilitarian heritage with the award winning television series renowned for its empowered fashion moments. These innovative boots, incorporating recycled materials, strongly express the fusion of function and style, for which all Hunter iconic products are known.”

Executive producer of Killing Eve and CEO of Sid Gentle Films, Sally Woodward Gentle, also weighed in on the perfection of the collaboration in a press statement, saying: “Hunter is a globally celebrated brand with storied heritage of over 160 years and we are delighted to be collaborating with them on this capsule. Their fusion of protection, functionality and style are a perfect fit for Killing Eve.”

The Hunter x Killing Eve collection is now live on SSENSE and on Hunter, and will later be available at select retailers.