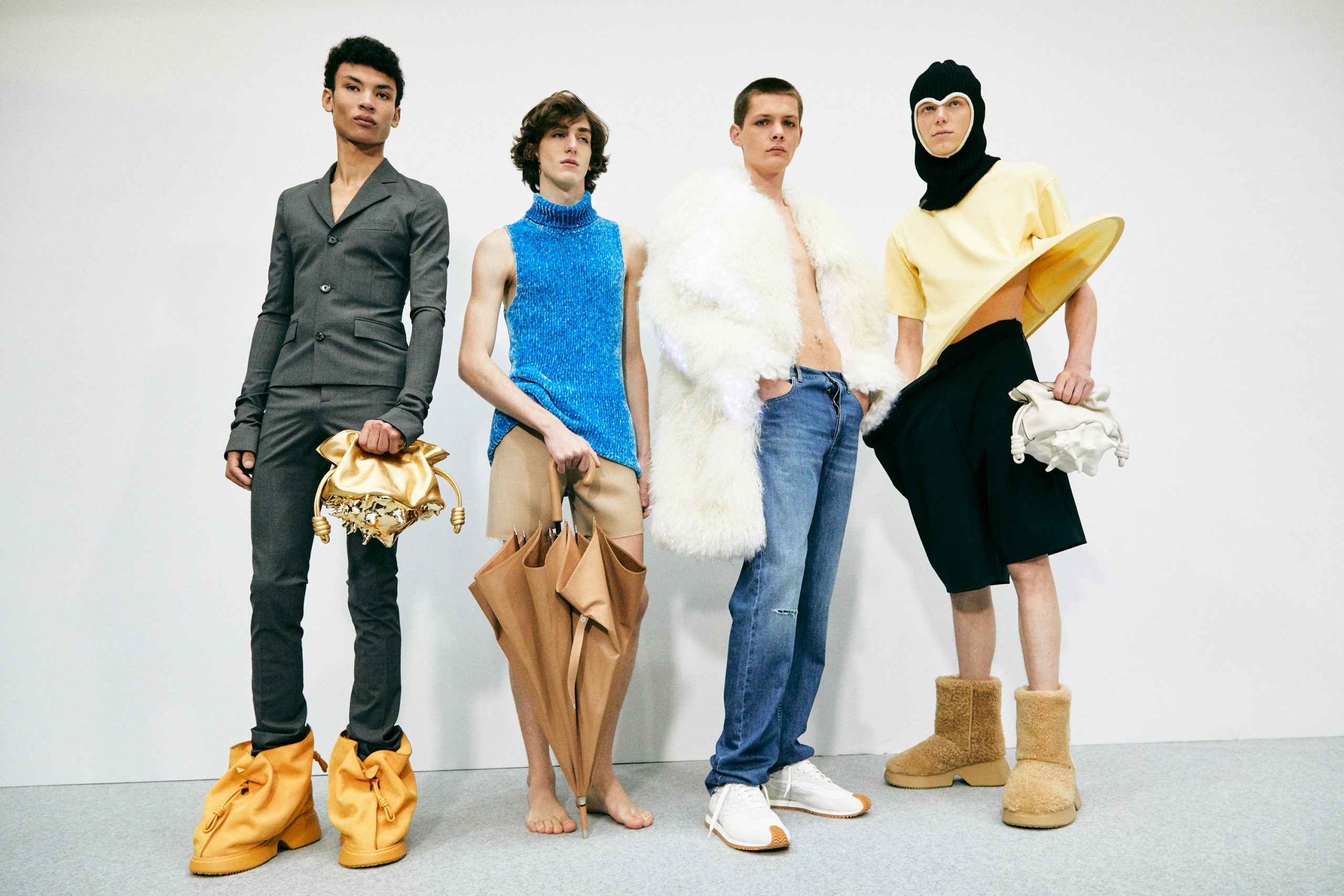 Earlier this month, Loewe made headlines after releasing their highly in-demand Spirited Away Collection (still available in limited stock), which was featured on everything from billboards all over international landmarks to Ariana Grande’s Instagram Story. Continuing to build on its lifetime of success, Loewe has taken Fashion Week by storm and presented its Fall/Winter Men’s Collection on Jan. 22 in Paris.

In the hands of creative director Jonathan Anderson, Loewe’s natural values of progress and craftsmanship feel elevated to a higher level. Anderson brings his trademark minimalistic style and transforms it into a sight of straightforward natural beauty — through highly edited and precisely created collections, the spirit of Loewe lives on tenfold, and nowhere more so than in this edition of men’s clothing.

As a part of his mission to uplift artists with his position at Loewe, Anderson presented the Fall/Winter ‘22 collection in conjunction with artists Joe McShea and Edgar Mosa. The two artists worked together to make a site-specific installation, which featured 87 single-color flags, each made of 4,000 individually cut ribbons. In being blank, the flags challenged preconceived notions of the meaning we place behind symbols and provided a beacon of unity to set the stage for this collection.

On the collection, Anderson shared in the runway notes: “The body is the point of arrival and departure, nakedness reproduced in shrunken scale on trompe l’oeil pieces, the elementarity of underwear and base layers exposed as an external self. A new shrunken and frozen silhouette sits close to the torso and legs…Nonsensical dresses protrude in trains, on the front, twisting the body… LEDs and lights illuminate coats, the waistline and the sides of trousers, and profile of shoes, like a glow coming directly from the body being projected outward… Archetypes of men’s dressing are put under a twisted light. Displacement brings things to another dimension: sinkholes frame the void onto the surface of coats and bags… Backlit into altered non-perfection, another kind of reality is drawn. A collection that defines a reset by putting the body first and speculating around it.”

Anderson’s vision of combining simplicity with optical illusions is certainly present: The collection itself seems to combine performance art and embracing our culture’s current flexibility of gender expression, which is exemplified by the LED lights that were featured underneath some pieces of the models’ clothing. In one particularly resounding example of performance art, a model walks down the runway featuring an upside down image of himself shirtless. Later on, a model walks down the runway, wearing a shirt twisted over his face with an image of the same model as before, only in black and white, and screaming.

The rest of the collection continues this subdued but distinctive displays of style: a wool gray knee-height coat adorned with comically oversized golden and silver metallic buttons is paired with a pair of mid-waisted gray dress slacks, and the model wears no undershirt; a long-sleeved shirt emblazoned with the image of a man’s naked torso and arms paired with jeans, almost fades into the background when combined with the striking black-and-white striped balaclava (which has been proven to be this season’s hottest accessory); and, in what in the most shared moment of the night (with thousands of fans reposting the image and begging their favorite celebrities’ stylists to acquire it), a wool black crew neck sweater, with the left nipple exposed through an abstract heart cut-out.

Overall, the collection has done something difficult but refreshing and exciting from Anderson’s hands — created a collection that consists of what one can tell will be the new generation’s “basics” — clothing we’ve seen on this runway looks timeless and so effortlessly cool that every person who’s seen it can’t help but incorporate it into their everyday lives. I can not wait to see how this collection is utilized within men’s fashion in the coming year and inspired for decades to come.