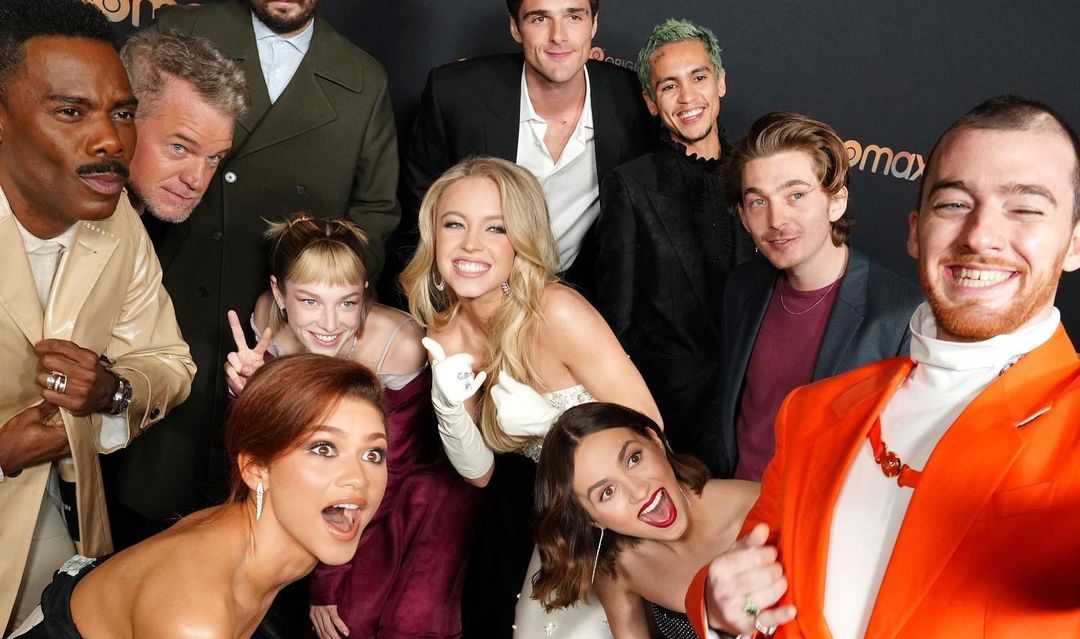 The record-setting HBO series Euphoria is back for season two, premiering almost two years after its first season ended. Since then, the cultural impact of the show has been undoubtedly unforgettable — from the glitter-smudged eye makeup trends (in which you either came out looking like Rue herself or a horrible mess) to neon-colored lighting adorning the room of almost every teenager in the country.

On Jan. 5, the star-studded cast gathered for an intimate event to celebrate the premiere of season two. The guest list included just the cast, who each made a high-fashion statement on the black carpet, with styles raging from vintage chic to modern and bold.

Easily one of the most anticipated looks of the night, Zendaya went ALL out for the Euphoria premiere wearing a thick black and white striped mermaid-style dress with a scalloped neckline from Valentino. Throughout the day, both Zendaya and stylist Law Roach teased images of the dress, showing its original appearance at the Valentino Spring/Summer 1992 show in Paris. The dress was originally modeled by Linda Evangelista, who at the time was sporting a red updo, which Zendaya paid homage to. After a whirlwind of press looks in the past year, from Dune to Spider Man: No Way Home, Zendaya and the inimitable Law Roach have been able to cement her status as a staple in the fashion icon space.

Prada darling Hunter Schafer stepped out in a deep magenta off-the-shoulder dress with a white collared shirt detail peeking out up top, from the house. Reprising her role of Jules in season two, the more serious, business-like attitude of her attire may be an allusion to the fate of her character. The color palette also reminded fans of a darker play on the playful bubbly colors that Jules usually wears, including her iconic pink dress in season one’s prom scene. Schafer previously worked with the brand back in May 2021, when she was the face of the larger-than-life mod-influenced Galleria bag campaign, shot by director Xavier Dolan, and has most recently been named the face of the brand’s Spring 2022 campaign.

Sydney Sweeney, in what is arguably the most talked-about look of the night, wore a two-piece Miu Miu beaded skirt and strapless top set, complete with rhinestones, elbow-length matching white opera gloves, and what is sure to be this season’s hottest accessory, a crystal belly chain. The sweet yet Y2K-inspired style invoked the memory of Sweeney’s character, Cassie, who is a fan-favorite (who deserves SO much better!).

Alexa Demie is, indisputably, a trailblazer when it comes to owning your style. For the premiere, Demie donned a custom, floor-length Balenciaga dress, completely covered in black sequins. The confidence in her expression and body language exemplifies Demie’s character on Euphoria, the outspoken, bold Maddy Perez. The inspiration for Demie’s slicked-back updo bun hairstyle, she told Vogue, was the Mexican actress and singer Maria Félix, who rose to prominence in the 1940s.

Angus Cloud wore a bright orange Versace suit, styled with a white turtleneck and a tangerine harness. The suit itself is from Versace’s Spring/Summer 2022 runway show. Cloud is reprising his role as drug-dealing college dropout Fez, who has garnered something of a cult following, with a fiercely loyal fanbase who can’t seem to get enough of the empathetic nature of a character that exists in shades of gray.

Maude Apatow, who plays the comparatively normal, yet still intriguing Lexi (Rue’s best friend since childhood), made a venture into the world of high fashion. Apatow was clad in a Yves Saint Laurent sheer dress with rhinestone detailing and a black bodysuit underneath. Styled by the always impressive Mimi Cuttrell, who’s created unforgettable fashion moments such as Ariana Grande’s fashion during her time as a coach on The Voice and Gigi Hadid’s drool-worthy Met Gala looks, Apatow certainly turns heads in this stunning look.

Watch the trailer for season two of Euphoria below and watch this season on HBO Max.