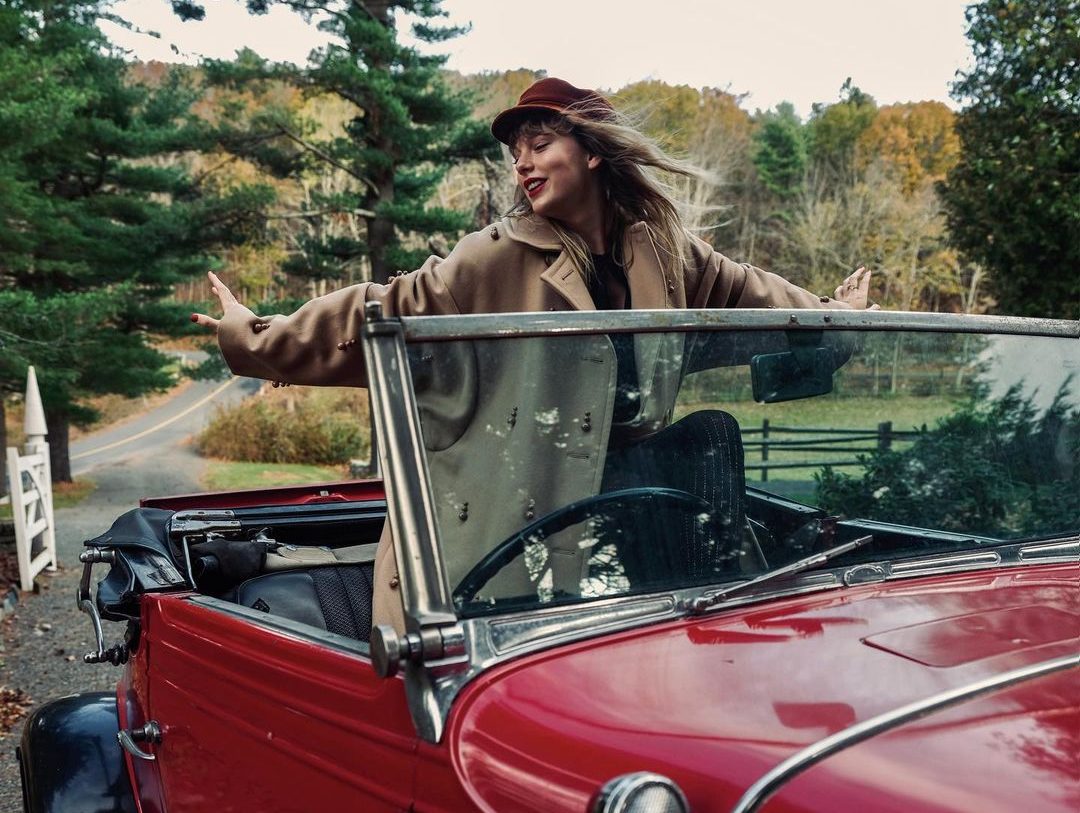 I listened to Taylor Swift’s Red rerelease while reading My Body by supermodel Emily Ratajkowski, and boy was that a trip. Just yesterday, I finished her essay “Buying Myself Back” for the second time. That’s what Swift is doing right now as she re-records album after album — she is buying herself back. It’s almost eery how deeply Swift’s and Ratajkowski’s stories reflect each other. In “Buying Myself Back,” Ratajkowski talks about how she paid $10,000 for a photograph of herself that an ex-boyfriend at the time had hanging in his home. She talks about how terrified she was that he would release nude photos she had sent him as a form of revenge after the breakup. Swift has spoken about how Scooter Braun had a hand in Kanye West’s revenge porn video “Famous,” which showed a wax figure of Swift nude in his bed, claiming that she had gotten famous only after sleeping with West. After Braun purchased her entire album catalog, Swift was furious that this man who had bullied her so incessantly now had control over her music. Challenge accepted, because now album by album, Swift is tirelessly re-recording her catalog. But this isn’t the Swift you remember, this is a Swift who is 10 years older, wiser, and more talented than ever. This is a Swift who has bought herself back.

The majority of the music on the album is the same as what’s on the original Red album, but it has a different resonance. For one thing, Swift’s voice has matured since 2012: It is lower, stronger, richer, and more confident. In “We Are Never Ever Getting Back Together,” she sneers during the spoken word line “This is exhausting / we are never getting back together / Like ever.” It sounds exhausted this time around, not the false confidence of a child but the somewhat jaded frustration of a woman who has been through this one too many times. Classics like the titular single “Red” are lent an almost Old Hollywood beauty by Swift’s many layered vocals. If Swift at 22 had the sugary innocence of an ingenue, Swift at 31 is Katharine Hepburn at the height of her career with the wisdom to know that her confidence is earned.

There are several unheard tracks on the album as well, including the poppy radio ready hits “Babe” and “Message in a Bottle,” but we also have a collaboration with fellow songwriting genius Phoebe Bridgers on the single “Nothing New,” in which the two mega talents croon the question, “Will you still love me when I am nothing new?” It comes across as a heartbreakingly honest question, perhaps not just to a faceless love interest but perhaps even to their audience. Female musicians have an expiration date the way that male musicians don’t, and Swift is wise enough now to know this and be both terrified by it and furious over it.

The main draw of the album, though, is what is generally considered Swift’s master piece single “All Too Well.” When the single was first released, it was a heartbreaking work of lyrical genius and emotional magnetism, somehow managing to fit a lifetime of loss into one 3-minute song by a woman who had had maybe four serious boyfriends in her life. And yet it stuck. “You call me up again just to break me like a promise” is a line that hurts to write, let alone to hear. You think about the kind of person who this young woman gave her heart to and who handled it so carelessly that it broke her thoroughly enough to be able to write something like that. Hearing her sing it now 10 years later, you know it means more to both her and us. We’ve been hurt worse since then and we will be hurt even worse in the future. That’s just how life is. You can hear in her voice the reverence she feels singing it again.

The album also boasts a 10-minute version of the song that deepens the wound with anecdotes of introducing this man to her parents only to have him leave her alone on her birthday. The short film she wrote and directed, starring Sadie Sink and Dylan O’Brien, shows young Sink lying curled up on her bed because of the much older boyfriend who has treated her so callously. It’s been compared to a Nicholas Sparks film and the comparison is apt — it’s also not an insult. Swift isn’t a filmmaker and yet she was able to create something that had the resonance of a seasoned romance writer. Because that is what Swift is. She is a writer, and she is someone who knows romance and loss like a Emily Brontë heroine. Braun thought he could buy this amount of genius for $300 million, but this is a lifetime’s worth of work and experience, and as Swift proves to us in the richer more nuanced re-releases, she has paid dearly for the things she writes about. And here she is again, buying herself back, and showing us the wounds she has received in doing so.