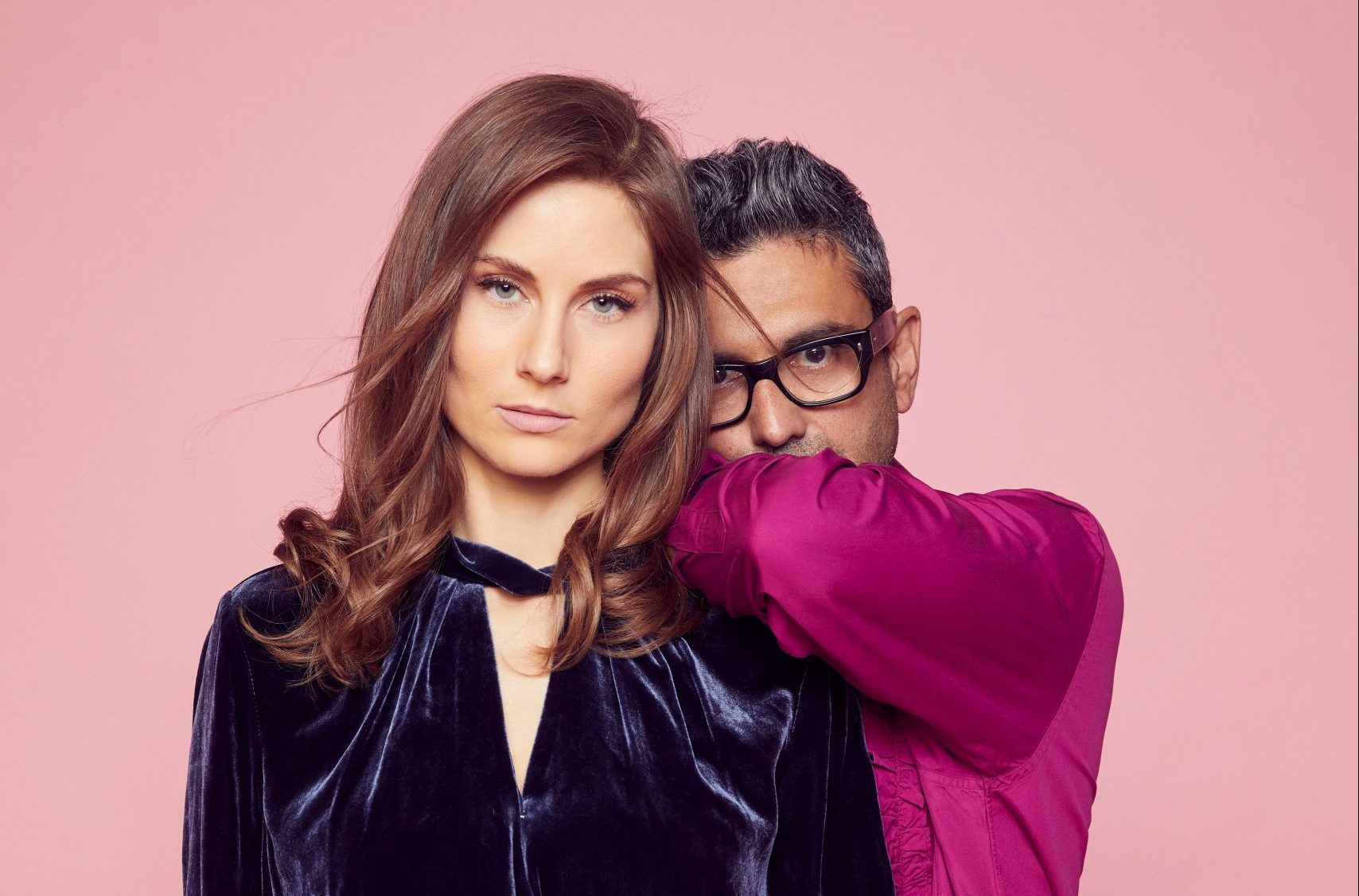 Australian duo President Street have done nothing short of explode onto the UK music scene over the past few years. Their unique mixture of drum and bass with retro-tinged pop creates the ultimate party music with a message, something we have been in severe need of recently. Pete and Ruby recently released the Heartbreak Player EP, a collection of tracks inspired by their need to maintain creativity and positive outlook as a musician duo, even during the never-ending Melbourne lockdowns in Australia.

On the eve of their support slot with legendary ’80s pop musician Roachford, we sat down with Ruby to find out more about the EP, the duo’s sound and origin story, and what else we can expect from them soon.

Could you elaborate on how you guys started making music together?

Yes that was a few years ago now — we first met through an online website for creatives and as Pete recalls, he listened to every female singer’s profile in Melbourne, and when he came across my profile he loved my voice and the fact that my recording was a cappella on my iPhone versus everyone else’s fully produced songs. I figured if someone wanted a singer then don’t they want to hear my voice clearly? So that was the start of us making music together. I sang a few songs Pete had already written and in 2018, after natural evolutions in the band, we started song writing and making music together and bringing in the talent of [producer] Ash Howes to do the final mixes of our last few songs.

What was it about each other that made you go “let’s make music as a duo”?

It was more of a natural evolution; over the years, President Street just evolved to become the two of us at the core of it all, so it made sense to write together. We had always had similar musical tastes, mostly pop and R & B, so we tried writing together for the first time and realized how easily it flowed together. As neither of us have formal training or a theoretical music background, we sort of formed our own musical language to communicate, and Pete was able to bring to reality what I was trying to convey and describe, and vice versa.

I think overall what made us go “let’s make music as a duo” was that we kind of fill each other’s musical gaps really well and just complement each other in that way. Pete’s stronger with the instrumentation and lyrical side of things, and he feels I am stronger with melody and creating energy shifts in the songs — even if I have to describe what I want to here as abstract as “it needs to sound and feel like a wave crashing over you,” he’s able to translate that into our songs.

President Street is really the start of the real musical journey for us! Before this we were in our bedrooms (or bathroom in my case!) — just things at school. Pete was out and about having fun on percussion, joining bands on stage at live music venues, and writing songs in his home studio.

How would you describe the sound of President Street?

We’d describe our sound as primarily pop but we try to be unrestrained by genre. We’re always trying to convey a story, feeling, and message of hope. Musically, mostly pop with R & B and rock elements.

What is the story behind your stage name?

President Street is actually the name of the street that Pete grew up on in Perth, Australia. It felt right when he suggested it as a name after knowing his backstory and experiences growing up having lost his mother and two siblings in a car accident before he was 2 years old, then another sister a few years later, and then his father when he was 13 years old — orphaned and with his older sister looking out for him. His mother was very musical, however, due to her untimely passing, and Pete not being able to know her and have time with her, he wasn’t exposed to music growing up. Had she survived, no doubt he would’ve started his musical journey there and then. But instead, the primary need to just survive superseded any of that for many years until he was able to provide his own grounding in life. I think it’s serendipitous that he ended up finding his way back to music (hence our first EP’s name “Involuntary Actions”!).

Knowing so much of what Pete’s been through and connecting in with the purity of what music gives us as humans and having President Street as our stage name represents the emotional full circle that music can be in life. The symbolism of Pete coming back to the name associated with his life being turned upside down, and where music also represents a special tie to his mother … where music and emotion and healing are interconnected … where the symbolism of “president” represents strength and rising above the “street” origins … it all just felt right.

We usually try to get out of town for songwriting sessions, and tend to work best in dedicated longer blocks of time first and foremost. Then as for the actual writing part, each song forms differently although the common theme is we try to ask ourselves what is the main emotion we’re trying to convey, and how can we get our meaning across for other people to feel and relate? Some songs will start with an idea, some a musical line one of us has come up with, some a melody, some lyrics. They’re all different. However, often it’ll be Pete playing around on guitar and when something catches me I’ll sing along with a melody and then, depending how the music and melody are making us feel, we give it lyrical direction and then comes padding it out more with the rest of production.

Music is a funny one because it’s not really like a 9-5 job where you have guaranteed results every time you do it. Some days nothing comes, some days it’s more intentional and calm, and other days it’s all pouring out and you can barely keep up! It’s those spontaneous flashes of creativity that come that you have to capture quickly or they pass. It’s the most exciting when those flashes come to ride the wave and see where it takes you rather than us taking it somewhere!

What inspires your music?

So many things! It really just depends — from personal experiences of self doubt like in “Something to Believe” to world events inspiring the coming together of people and fighting for justice like in “Time Is Up” to conversations with screenwriters talking about the three-act structure that they use and then trying to capture that idea with stages of betrayal that inspired a scenario that became “Yeah I Know”… a myriad of different elements.

What is the backstory behind “Heartbreak Player”?

“Heartbreak Player” started with the pre-chorus melody. The pre-chorus lyrics “I don’t want another heartbreak player / I don’t want another video gamer / I don’t want no cheap time waster” came very quickly and we thought we’d run with it. It got us talking about times of poor choices in romance and how so many of us in this world struggle choosing partners who are good for us — so many of us go on the self-destructive ride of the push and pull between projecting your own fantasy onto someone who is showing you clear as day that the reality is not aligned with what you want. It’s more about falling in love with your own idealistic visions of love than seeing the other person clearly — until the rose-colored glasses come off and you see it clearly and finally accept this person never had good intentions for you and vow to yourself with a bit of a pep talk “never again.” We wanted it to still feel fun and light musically and lyrically to have a dance to and elicit feelings of flashbacks and euphoria.

Could you share what “Something to Believe” is about?

Of course. “Something to Believe” is a very special song to me. The short answer is it’s a song that’s about courage and self belief. The long answer is it’s inspired by those moments in life where you feel completely broken inside, completely alone, completely confused and are struggling to even discern which voice in your head is really yours anymore because all the noise has drowned it out and you feel suffocated and like you can’t get back up.

People who have been damaged by other people and haven’t known, felt, heard, seen or thought about real love and acceptance enough to heal themselves, continue to pass that damage onto other people until someone along the line has enough spirit and awareness to stop that cycle. The courage it takes to dig deep and to peel off all those false layers that were put onto you in order to get back to the true version of yourself and live in the love and light you’ve always known is true, is the premise of the song.

While stuck in the Melbourne lockdown, how were you able to prepare for the tour?

To be completely honest it was a bit of a struggle as all venues and even rehearsal rooms were closed and we were under super strict restrictions, however we did everything we could each day. Like I would drive around singing in my car most days and we’d meet in the park and work through our list of things to do. It was definitely challenging but we got there and now we’re here in the UK and super excited to start our tour.

Is there anything you took away from the time you both spent in lockdown?

The main thing we took away was the love of performing live. Having landed in the UK and played a few shows we realized just how much we missed it. We cannot wait to get on the road with Roachford in November and we will definitely never take those moments for granted.

What can people expect from your live shows?

We have changed our live shows quite a lot from the last acoustic tour we did. We’ve added in loops, keys, percussion, and electric guitar and we’ve really tried to introduce some light and shade in the performance.