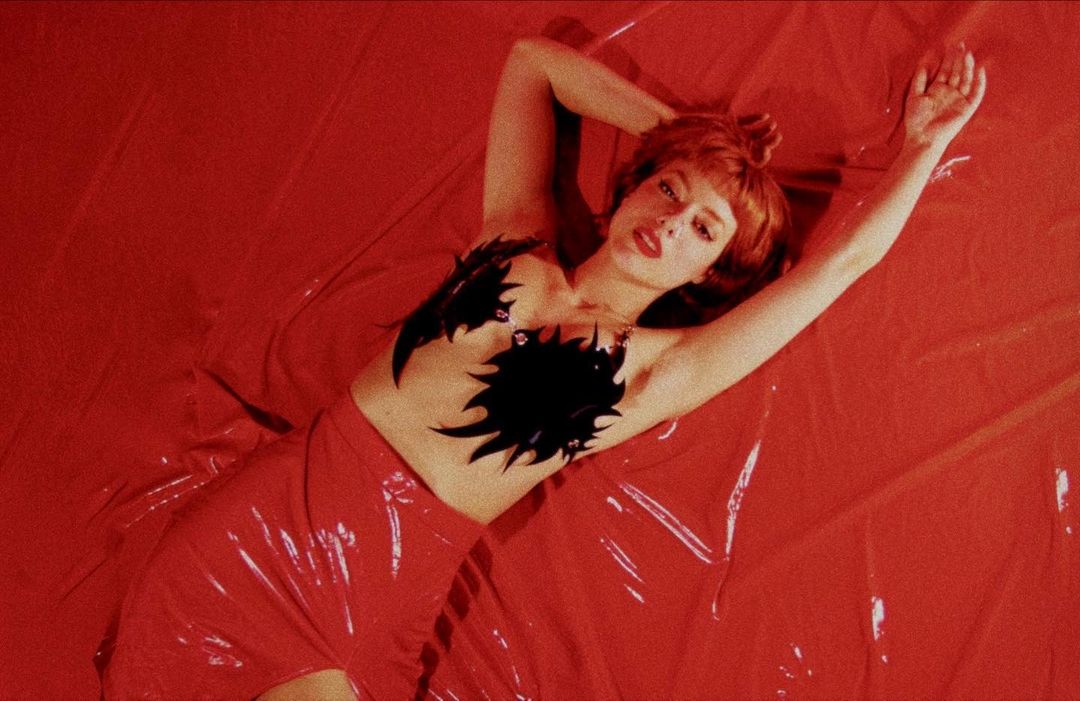 Lola Blanc has the kind of mind I would love to live inside. An actor, writer, singer, and former ventriloquist, she has the rare gift of being able to translate her thoughts into a brilliant eloquence that is only elevated through the lurid visuals of her music videos. Her latest video, “Here Come the Wolves” embodies her trademark goth-pop melodies, coupled with a blood red color palette and style that was inspired heavily by the film The Cell.

As a representation of some of Lola’s more negative emotional experiences, the video was both cathartic and mentally draining to create, however Lola is no stranger to making art from difficult experiences. She has written about her experience e as a cult survivor and one of her most popular songs, “Angry Too,” was inspired by her former relationship with known abuser Marilyn Manson. But Lola is still an advocate for a way of solving the cycle of abuse that does not rest on condemnation, but rather implements systems of therapeutic and educational change. EUPHORIA. spoke to Lola about each of these subjects as well as her opinions on wolves and her continuing love of Fiona Apple.

Your new song actually seems like a bit of a commentary on the cycle of harm, the way that when harm has been done to you, it can make you feel the need to cause harm as well. By channeling that feeling to an act of creation instead of destruction, did this end up being somewhat of a cathartic experience for you?

The answer to that is complicated, because the process of making this video actually caused some mild destruction to my own mental health, but that’s another story! Ultimately yes, the act of creating in general is inherently cathartic for me, because that’s how I process my emotionally charged experiences, and this was no different. I’m not generally a reactionary person, so I don’t know that I would have chosen destruction regardless, other than maybe harboring painful feelings instead of letting them out — but letting them out was nice.

The video itself for the song is gorgeous in a somewhat uncanny way (your comparison to the film The Cell is quite apt). Was it a challenge to make a video about violence into something beautiful?

Thank you! I originally wanted this video to be realistic and visceral and disturbing, to really hammer the message home that violence is still violence, even when it’s intended as justice. I love movies that use upsetting imagery to make a point. But of course I’m in the minority on that and I realized it just wouldn’t be an accessible way to communicate the concept. And then one day I’d been watching some wild Jodorowsky films and an image popped into my head of this sort of surreal, high-fashion world where the same type of story could take place, and the rest of the creative fell into place from there. But it would have been way more of a challenge if I didn’t have such an incredible team to make that vision a reality and expand on it to make it special.

Do you often get your video inspiration from short films and cult favorites like The Cell? What are some other ways you find your aesthetic inspiration?

I think the majority of my video inspiration comes from film, but it can be anything. A painting, a fashion editorial, interior design, a landscape. One time I saw a girl at a party who looked and dressed so much like me that my brain short-circuited and I thought I was looking at myself for a split second, and that inspired a short film I made.

Who are some of your musical idols? What do you listen to in your downtime?

I feel like this answer hasn’t changed in 10 years, but Fiona Apple, Tom Waits, and Danny Elfman still reign supreme for me, along with artists like Kate Bush and classic jazz singers like Ella Fitzgerald. Lately I’ve been obsessed with Woodkid, who I’d love to collaborate with, and a lot of film scores. And then a ton of sad, slow music that doesn’t sound like anything I would write. I’ve been loving Fleet Foxes and Big Thief and Sharon Van Etten. Sad white people shit.

Can you talk about writing for Britney Spears? Did you get to talk to her at all at the time? As a pretty vocal advocate for women rights, what are your thoughts on everything that recently came out about her conservatorship?

I never got to talk to her, sadly! But I was so proud of being able to write for her, and I’m so glad to hear she’s getting free of that conservatorship. The level of control she was under was incredibly unjust. It’s an issue I knew very little about prior to learning about her situation.

You’ve written songs in the past about some of the more difficult experiences you’ve had — is it difficult to confront those feelings in your songwriting or is it more of a comforting act?

Dealing with my feelings is basically the entire reason I write songs, and often they’re uncomfortable ones. It’s a way that I process them and get them out of my body, so it tends to be more of a release than anything. Before I ever went to therapy, songwriting basically functioned as a form of therapy for me.

You’ve spoken very openly about several different issues that all touch on the similar subject of the type of abuse women suffer. With the story surrounding Gabby Petito, what are some of your thoughts on the type of gendered violence and overall misogyny that our culture seems to suffer from?

Violence against women, and especially trans women, is clearly a very serious problem, and the vast majority of those crimes are committed by men. This is something most of us know by now, and at this point I’m less interested in talking about the fact that it happens and more interested in looking at why it happens and how to prevent it. If we prioritized mental health as a country, if we offered support for families and boys in their formative years, if the culture shifted to the point where emotions besides anger were no longer stigmatized or branded as weakness, what would change? I love organizations like A Call to Men, that are trying to build a safer world for women by teaching men to look inward and interrogate their own feelings and behaviors. I’m tired of hearing tips for women on how they can be safe from violence. I want to teach men how to not commit violence.

I never practice and I would have no idea what to say to a future ventriloquist, honestly! But I fully intend to incorporate my ventriloquism into a film or video in the near future. It’s a surprisingly easy skill to learn, and I’m sure the next Shari Lewis is out there somewhere, waiting to be discovered.

You also occasionally act, such as your role in the film Under the Silver Lake. Any plans for more acting in the future?

I actually love acting a lot and I’m hungry to do more of it. I’m in a couple of films that recently went to Tribeca, SXSW, and other festivals, and I’ve acted in my own short films, but I’m hoping a juicier role will come my way soon. I would love to be a scream queen! But, you know, an arthouse scream queen.

My friend actually just recently got to see wolves in the wild at a reservation, have you ever had a similar opportunity? What animal would you consider yourself most similar to?

I never have but that sounds amazing! I asked my boyfriend what animal he thinks embodies my qualities and he said I’m a fox. So I guess I’m a fox.