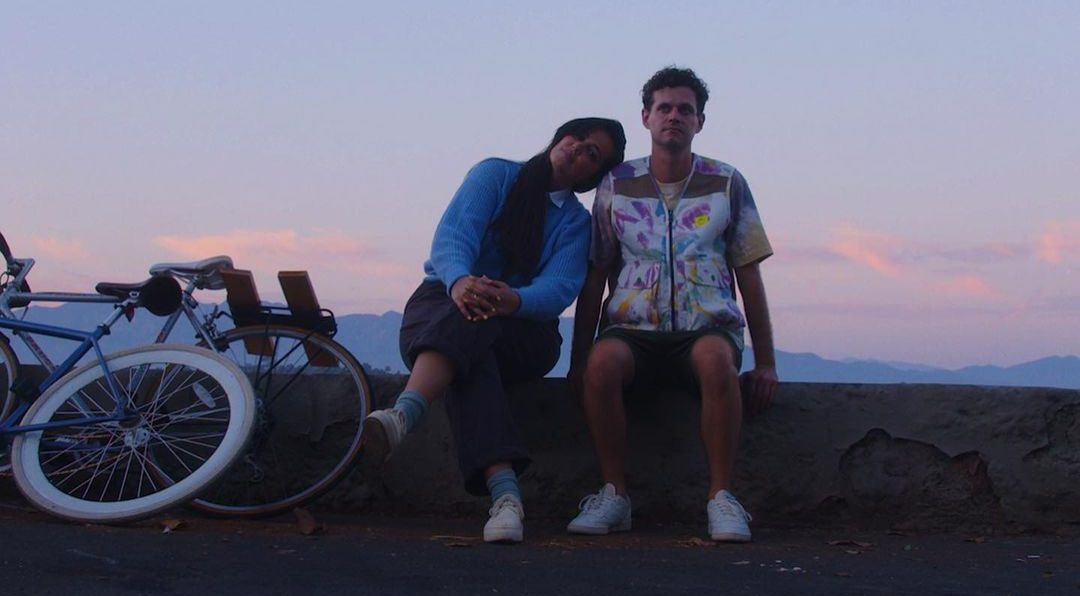 Los Angeles-based group EXES have released their latest single, “Clapping on the TV.” Inspired by a time period in singer Allie McDonald’s life when she made money by clapping on TV shows, the song turns a drab moment into one about how success isn’t always what you expect it to be and shaking off a mid-life crisis. The indie-pop song is sure to remind you to chase your dreams.

“Clapping on the TV” is one of a few singles released from their debut album, Don’t Give Up on Me Now, their followup to 2020 EP Nothing Ever Ends. Considering the duo have a strong catalog thus far and are growing with each release, it makes sense that they’re found on popular Spotify and Apple Music playlists. We got the chance to speak with EXES ahead of the release of their new single.

We’ve heard you described as an indie-pop act. Is there anyone in that genre that has been a source of inspiration for you?

Mike Derenzo: We both grew up in the blog era of indie rock so there are a number of artists in the genre that have inspired us over time. We are big fans of Death Cab, Frightened Rabbit, Modest Mouse, and LCD Soundsystem.

So, you have a new song out called “Clapping on the TV.” What’s the story behind the song?

Allie McDonald: Basically, up until quarantine I was making money by clapping on TV shows (game shows, talk shows, etc). I’d spend six to eight hours a day sitting, dressed up, and watching/reacting to live TV. It sounds alright, but it was pretty boring — no phones allowed, the studios were always freezing. I was also barely making money and working almost every day. I’d see friends from college getting married, buying houses, going on vacations, and I was legitimately spending my weeks clapping and making no money. It’s based on that feeling — like the world is moving but you’re running in place.

Allie, are you allowed to tell us what the TV gigs were like beyond expressing it in song or do they make you keep it secret?

Allie: I’ve done it all, from Family Feud to The Real to Masked Singer to Dr Phil. I’m all over your TV screens (or at least the sound of me clapping is). My favorite was the trivia shows. I know so many fun facts now.

Back to the topic of music; what was the moment you both decided to take on this project of EXES together?

Mike: After college, Allie and I would get together periodically to write songs. The genres and tone would vary wildly from song to song. We eventually hit a rhythm, making a few songs in a row that we joked sounded like a band. We took that joke and made it our reality.

Since the song is based on a personal experience, is it fair to say that your songs are inspired by your life’s story?

Allie: Definitely. It’s always easier for me to write when I need to sort through my own feelings. I always say that I feel too much and it is both my biggest weakness and my biggest strength. I’m not sure I’d be writing songs if I didn’t need the outlet. Anyone I interact with, from a boyfriend to a barista — no one is safe. Everyone gets a song.

Since you’re based in LA, has the “culture” of the city shaped your path in music?

Allie: I think so. At least slightly. I don’t think “Clapping on the TV” would have existed for starters. Being a paid seat filler is maybe the most LA thing ever. Lyrically, I also have a lot to say about this town. It’s so horrible and beautifully exciting at the same time. I’m always trying to move, but something about LA always pulls me back.

Mike: I would say no. We have created our own little creative bubble where we write and produce our songs isolated from a ton of the stereotypical LA nonsense. Overall I find it extremely easy to avoid the negative aspects of LA you see displayed on TV or social media, by surrounding ourselves with people who derive value from other aspects of life outside of music/entertainment.

A key theme of “Clapping on the TV” is how success looks different for everyone. Looking back on your careers thus far, how do you truly define success?

Allie: To be honest, I’ve learned that success is more personal than obvious or public. I used to think it was about the numbers, but then last year we released a cover with Chris Carabba (Dashboard Confessional) and it really did change my feelings on the matter. My actual musical hero has vocals sitting next to my vocals in a song that’s out in the world. It was the coolest thing to happen in music for me thus far.

Mike: Success is all about being content with how you spend your day-to-day life. While making music is a large part of that, there are so many other areas of life that can bring fulfillment. I think working on having a balance between work life vs. personal life can end up aiding the creative process in the long run.

If you could have one all-time goal for your music career, what would it be?

Mike: Having a career that allows us to create for the rest of our lives sounds ideal.

And lastly, anything you want to share with us about what comes next? Any projects in the works?

Allie: We have our debut album, Don’t Give Up on Me Now, which will be out Feb. 4. Lots of fun things leading up as well. Can’t wait.