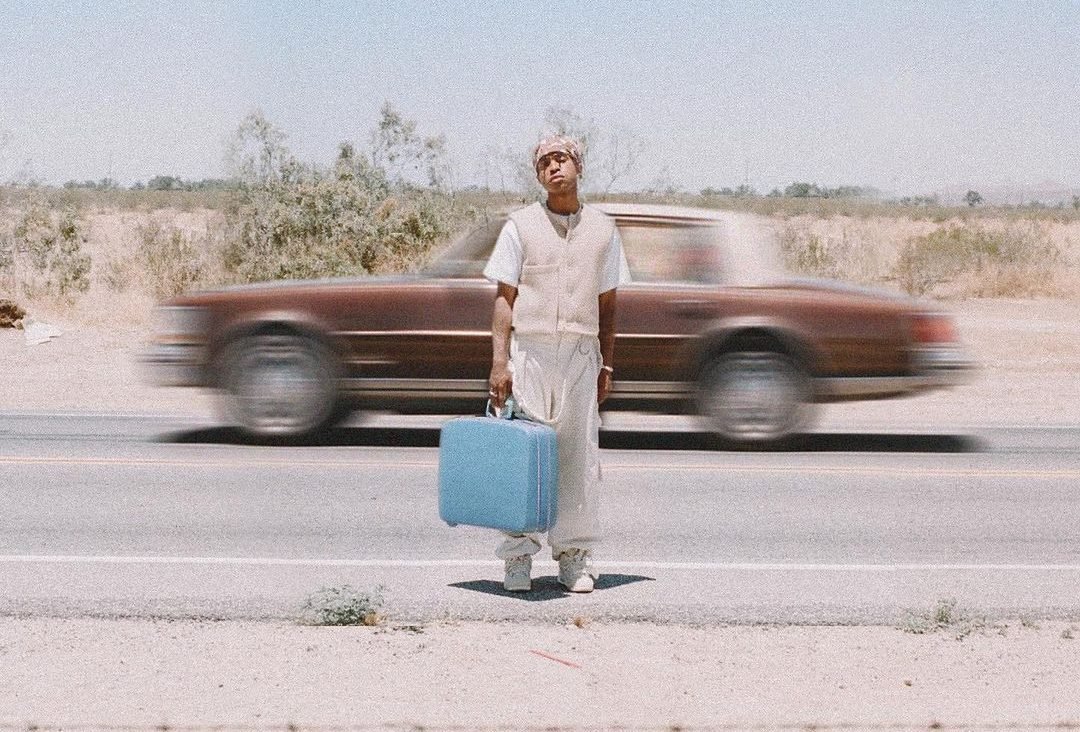 For Bren Joy, his talent is showcased within his ability to fuse pop, R&B, and gospel sounds into his personal blend. His emotionally driven vocals are more than likely to have you replaying a song while adding it to your playlist for feel-good songs.

The singer-songwriter was raised in Nashville, home to hundreds of musical legends, and he made The Tennessean‘s list of Nashville Artists to Watch in 2020. Earlier this year, Joy released his deluxe edition of his first project, Twenties, sharing an additional seven songs to his original EP. His most popular track — coincidentally his first and favorite song — is “Henny in the Hamptons,” which rightfully landed on 2019 list of Vulture‘s best songs. The feel-good track is an excellent entry into Joy’s criminally underrated artistry.

As I logged onto our Zoom called, I noticed his admirable selection of vinyls that doubled as wall art. SZA’s CTRL, Childish Gambino’s Awaken, My Love, and Mac Miller’s Divine Feminine were among the collection that instantly comforted me that this interview was going to go smoothly. In my nearly 30-minute chat with Joy, we discussed his Music City roots, his upcoming tour with Pink Sweat$, and a reflection on his deluxe edition of Twenties.

Hi Bren! Nice to have a chance to chat with you. What albums/songs have you been listening to lately?

Oh my gosh, everything. There’s this guy, Xavier Omar. I don’t know if you’re familiar with him, but I’ve been diving really deep into [his music]. Baby Keem’s album just came out, so I’m bumping that hard this morning. I’ve listened to everything. I feel like I’ve been trying to really dive into Foushee. I’ve been telling everyone that I see, “Yo, this girl’s about to be it.”

I’ve been listening to Foushee, too. I really enjoyed her last album, along with Baby Keem and Xavier Omar. Kacey Musgraves also released something new. I’m sure you’re familiar with her, due to her similar Nashville roots. What was it like growing up there?

Growing up in Nashville was interesting, because it was very quiet, very suburban, very run of the mill. Now you come to Nashville and it’s crazy. It’s very southern, very heartwarming — it’s like your friendly neighborhood. That’s kind of how it felt for me growing up, and I think [Nashville] still has that effect on me.

Could you say that the infamous Music City influenced your sound?

Yes, while growing up, my parents really pushed me to grow up in R&B. We were a big road trip family, so we’d always take road trips and listen to everything from Kim to Earth, Wind, and Fire to Freddy Jackson. So I really took a lot of inspo from that.

Do you think you’ll be moving to another music-influenced city soon?

I think so. I’ve definitely caught the LA bug a bit. But I think Nashville is so natural and intellectually creative, and LA is so physically creative, like everyone embodies who they are through how they look, through what they do and through their expression. That’s something that I really didn’t get to experience [in Nashville]. I went to LA, and I had culture shock. I was like, “Oh shit, these kids are out here.” My peers are here creating aesthetics, creating trends and that’s just their life. For us in Nashville, there’s live shows everywhere. Everyone’s singing or playing guitar, and that’s just the culture.

Do you have any fun hobbies outside of music? What’s a day off look like for you?

I’m a big nature guy. I am always finding the best sunsets. That’s been a new thing for me. Whenever I’m not doing music, that’s my time to just not think about anything and just be kind of peaceful. I don’t really have crazy hobbies, but picking up sewing is new for me.

You’re definitely in a good area for nature! To shift the conversation a bit, where did your love and passion for music originate?

It definitely started when I was a senior in high school. I would constantly hear compliments from people saying that I could sing. I had a great way of expressing what I wanted to say, and I knew that people would listen, versus conversations. It’s just a lot easier to talk in the form of music and communicate. So from there, I became a music major in college, and I did that for three years and ended up hating singing during my junior year. My professor was like, “Yo B, why don’t you write your own stuff?” That was kind of the moment where I was like, “OK, let’s let’s do it then.” I just found my calling in life. I think it was a really big epiphany.

Did you ever feel any kind of impostor syndrome or doubt as a college student making all of these big moves?

I still feel imposter syndrome every day. I think that’s kind of the point of it, though. I think the moment you don’t really feel [like an impostor] anymore is the moment that you kind of lose yourself a bit. All my friends do music too, so everyone that I’m friends with is pretty much embedded in music. So it was really weird to see me put out music, and I woke up and so many people were showing me love. It’s something I’ve definitely honed into a little bit more though, and I definitely have that reassurance, but I feel like that feeling only never goes away.

You’re going on tour soon! How excited are you to join Pink Sweat$, Kirby, and Joy Oladokun?

I’m freaking out. I’ve done 10 live shows in my life, which is insane to think about. I’ve had some very good shows, which I’m blessed for, but it’s my first tour. It’s with Pink, and we’re doing theaters and seeing all these people. We’re going to Canada, so I’m just very excited to show people where I’m at creatively and really share my love for musicality and live shows with everybody. I’ve done a few live streams, but what we’re doing on tour, it’s totally different. So I’m excited to show some tricks up my sleeve. It’s gonna be so fun.

What song are you excited to perform the most?

“Headline” sounds insane live, but “Henny in the Hamptons” is always the special one. It’s the first song I put out ever, so it’s always a special one. We’ll see what happens on tour, [singing with Pink] is gonna be a really special moment.

How did you and Pink Sweat$ meet?

We met in Nashville, actually. He was cool with some of the people in my management, so we met randomly and he lives here now, which is really cool.

Besides working with Pink, who would you say your musical influences are?

Everyone. Of course, I’m inspired by old R&B, but I’m a big Beach Boys fan. I’m a giant Elton John fan, and Kaytranada is one of my favorites. Pharrell, too. I think Missy Elliott is the one person that when you’re working with her, you know you made it. I love a lot of Luther Vandross, since I’m very inspired by his voice and his focus, like I’m inspired by everything.

I hear a lot of Black artists. Would you say that they influence how you create a space for yourself in Black music?

The power that Black people have in music gives us the ability to connect with anybody. Every major moment that Black people have had in history has had music surrounded by it as well. That’s the only way we get through the hardship. And that’s something that I always take with me is the ability to connect and the ability to share what I love and present something new. Of course, I’m inspired by non people of color, but no one does it like Black people. It just hits a complete difference; it hits a place that no one else ever hits, and that’s what is so special about it.

Can you remember the feeling whenever you heard that your song landed on Spotify’s Fresh Finds playlist?

How does it feel to be a part of the Warner Records family?

Amazing. Warner Bros. is an iconic name and iconic company. They’re really pushing to bring out the newest artists, and I’m excited to be a part of that journey. They support so much creativity and so much innovation, and they let their artists be weird and be themselves and that’s what I really do love about Warner.

Are you currently exploring or plan to explore any genres of music?

I’m always growing; I like to experiment. I think I prefer albums over singles. I prefer having that full body of work where you can just really express yourself. I can’t give away too much, but I’m excited for people to hear where I want to go musically.

You have so much time to explore your music genre, too! How old are you? What’s your zodiac sign?

Does Twenties reflect your 20s?

I think a lot of it hits now more than ever. I felt a certain type of way about a lot of situations I was put into, and I think the best feeling about Twenties that I love about that record is that it feels so nostalgic. It feels very familiar. I’ve listened after a few months, and it just feels so warm and like a hug, like the whole project feels like a little hug. I was in such bliss and was so naive when I was 20-21, and I think that there’s something so heartwarming about that.

Were there any bumps along the road while creating the EP or its deluxe edition?

Yes, I didn’t intend on there being a deluxe, but it just kind of worked out like that. A lot of those songs I wrote a year before the deluxe came out. And I was just like, “The songs [on the deluxe] specifically fit this project.” It feels perfect. It feels complete now, and I feel like I can move on with my life.

What do you hope that listeners take away from your music?

How genuine I’m really trying to be. I think I am so inspired by so many different genres and people, and the goal of what I do is to look back when I’m 35, I’m like, “Wow, I really did what I wanted to do, and I really pushed and stayed true to my sound.” I hope people just feel that it’s supposed to make you feel good. I think so much music is sad right now and very hard and aggressive, and I just want to kind of take the other line and create music that people hopefully don’t have to think too hard about to enjoy.