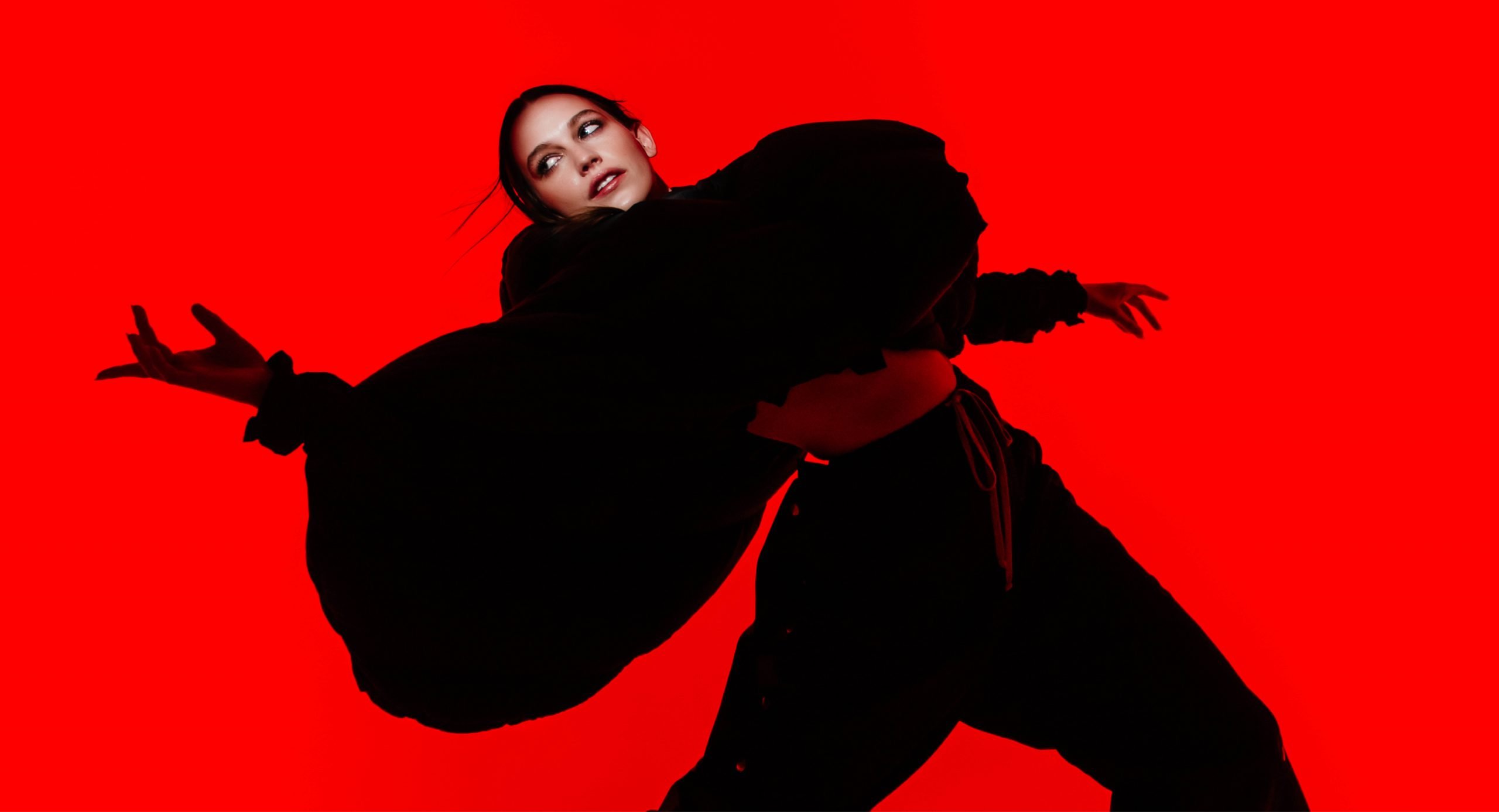 Love Quinn is one of those characters that you find yourself rooting for even though they really don’t deserve your allegiance. In Netflix’s You, which premieres its third season today, Love, played by Victoria Pedretti, steps to the forefront of the show as a multilayered person who, at her core, just wants her picture-perfect life. It’s the way she goes about it, though, that shows just how deeply flawed she is. Pedretti makes absolutely no excuses for her, however. “She’s a crazy murderous person,” she says quite simply.

And that’s the crux of this character and why she’s so damn intriguing.

Love was introduced in season two of You, which meant Pedretti had all of season one to familiarize herself with the show before signing on. She watched Penn Badgley’s character, Joe Goldberg, display all his psychopathic tendencies before falling in love with Love in the second season. But little did Joe know, Love was his actual match in the world of obsessive murderers. The end of season two found them stuck together as Love reveals she’s pregnant with their baby. Going into season three, though, their relationship immediately shows its cracks as these two try to navigate being parents … and murderers … and, well, crazy people. For Pedretti, though, playing a psychopath was a challenge she was not only ready for, but actually quite excited to get into.

“I think it’s very easy to embrace the idea of a psychopath,” she shares. “I think it’s just immensely selfish. I think we enjoy watching Joe and Love, because at any given moment, we can think that murdering a person who’s causing us problems would be the solution. But we can all pat ourselves on the back, because the majority of us are still gritting our teeth and dealing with the discomfort and challenges of relating to other people — without murdering people. We should all feel really good about ourselves for that.” 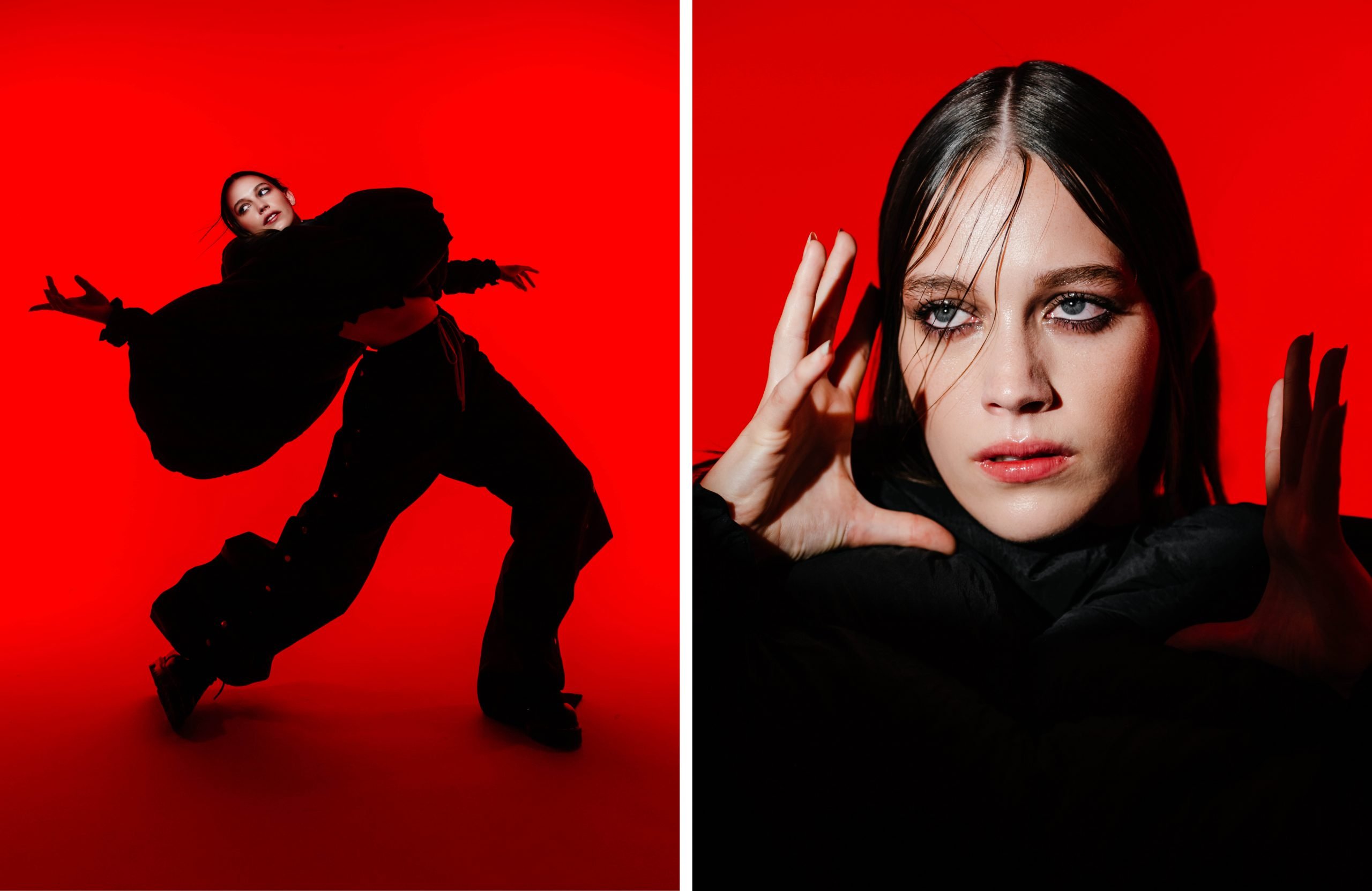 The interesting aspect of Love’s character is that she’s just as unhinged as Joe — she kills out of obsession and jealousy — but Joe can’t see her as anything other than crazy, something he doesn’t think of himself as. It brings up an interesting conversation of women being labeled as crazy for doing something a man would also do, like displaying jealousy or exacting revenge for cheating. I bring this up to Pedretti, wondering if it was something she put thought into as she was taking Love off the ledge and into madness. It seemed to me as a viewer that Joe constantly calling Love crazy made her, in turn, feel and act more crazy. To Pedretti, though, Love being labeled as crazy by Joe is fair, because she truly is. What it shows, though, is how out of bounds Joe himself is. 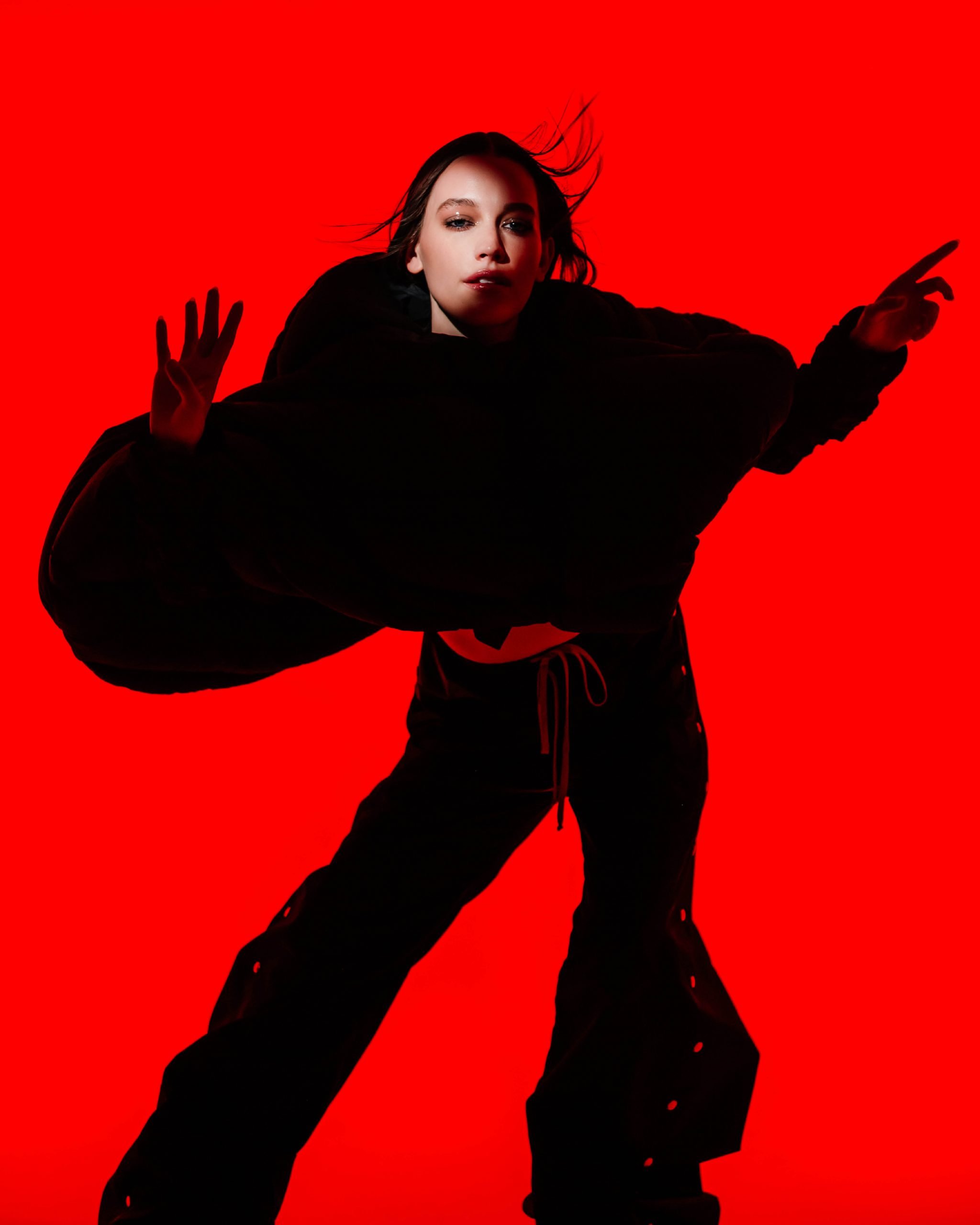 “I don’t think that she shouldn’t be called crazy and murderous just because she’s a woman,” Pedretti says. “I think it just means that Joe maybe should be acknowledged more for his behavior. I definitely appreciated that when I was listening to the trailer, Joe calls her a monster. And I was like, ‘It is so interesting how he doesn’t see it at all.’” She adds that she agrees with my assessment of the imbalance between men’s and women’s roles in something like cheating or murder, saying it is “so representative of our society” for the woman to be labeled as crazy when the man isn’t to the same extreme. “I appreciate and respect it,” she adds with a slight chuckle.

Pedretti sinks her teeth into a new community in the third season of the show — created by Greg Berlanti and Sera Gamble and loosely based on the book series by Caroline Kepnes — in sleepy Madre Linda, California. It’s an affluent neighborhood that Love should fit into, based on her hoity-toity upbringing, but it takes some time for her to find her footing. Along the way, she makes friends and enemies (and commits murder) and even finds herself smack in the middle of a timely conversation about anti-vax parents. When her baby, Henry, gets the measles, she soon finds out that it was because one of the sets of parents in the neighborhood doesn’t believe in vaccinations, leading to their own kids getting sick and spreading the virus. It’s a storyline that deviates from the book but feels incredibly relevant to the current COVID-19 conversation happening around the world. Combine this with a throwaway reference Joe makes to the coronavirus, and the show solidifies itself as one of the only current ones to even acknowledge the realities of what’s happening right now.

It stays rooted in reality by injecting dark humor into all of these violent situations, acknowledging the sad fact that sometimes humor is the only way to make it through tough times (including when you murder someone). “I think the more of that there is, the more grounded it becomes, strangely enough,” Pedretti shares of using humor as a story device in the show. “Because I really do find that that’s true to life. Great tragedy is often sprinkled with outbursts of laughter. It’s just the strange and beautiful nature of life from what I’ve observed.”

Pedretti goes on to point out how Love and Joe keep coming back to humor while they’re constantly challenging each other, even poking fun at their lack of parenting skills, like when they’re burying a body, for example, and they have to bring Henry along. It takes a little bit of the weight off of the darkness of what’s happening, allowing the viewers to not get too caught up in the actual horror.

Having to play a mother, though, was one of the most challenging parts of this season for Pedretti, she says. The 26-year-old is not yet a mom herself, but she relied on parents she knows in real life for inspiration, including those on set. Dealing with babies, however, was tough. “Trying to pretend to be a brand new mother, just having tiny babies being thrown on your chest,” she says with a laugh. “And you’re just like, ‘I gave birth. Ahhh.’ Actually, you’re like, ‘I’ve never given birth before, I don’t know what that means.’”

But for all of its challenges, Love Quinn was beautifully crafted by Pedretti. Despite being a murderer who has bouts of jealous rage over a man she considers her soul mate — who is, let’s be honest, an awful person — she just wants to be happy. She wants her twin brother Forty to come back to life. She wants to make her marriage with Joe work. She wants sweet next-door neighbor Theo to move on with his life. She wants her mom to go to rehab and get help. She wants her bakery to thrive in this hipster town too focused on health. And frankly, she’ll do anything she can to accomplish these things. Deep down in her flawed soul, she’s just a woman who wants happiness.

Over a midday Zoom call from opposite ends of the country, Pedretti — who is casually cool and chill as can be while chatting — acknowledges that Love is a complicated woman with issues that she feels an intimate connection with. It’s why when it came time to film the finale of the show, it was incredibly hard for her to do. And it’s also why, as of our call a few weeks ago, she still hadn’t watched the ending. “Yeah, that was really challenging,” she says of how her character ends the season. “Honestly, we had very little time to shoot [Love’s last scene]. I haven’t even brought myself to watch the final episode yet, because I’m scared. We literally had 20 minutes to shoot that, but I will eventually, and I’ll learn to appreciate whatever it is. It was really sad to do. Afterwards, I felt a huge release of that character and all of her turmoil and deep insecurity that she doesn’t show to pretty much anybody.”

For two extremely intense characters, it’s not surprising that Joe and Love’s relationship comes to a fiery peak in the last episode of the season. It’s a finale episode that does both characters justice and leaves viewers with more questions than answers — which will all certainly be dealt with when the show moves onto season four. And as the third season wraps up and drops into place on Pedretti’s resume of Netflix thrillers, it rounds out her work with the streaming service in the genre, after her appearances in The Haunting of Hill House and The Haunting of Bly Manor. And though Pedretti has seamlessly inserted herself into this genre as the kick-start to her career, it wasn’t really something she did intentionally. After graduating from Carnegie Mellon University, she landed the role in Hill House and went from there.

“I was definitely not purposely getting into the thriller/horror genre,” she says. “I personally don’t like extremely frightening stuff. My imagination is already pretty creative for the negative possibilities of life, you know what I mean? I don’t feel like I need to feed that. That being said, I’ve definitely developed more and more of an appreciation for the art that it is. And since then, I think I have embraced a way of life where if something frightens me or confuses me, I kind of move towards it.”

This willingness to embrace the difficult and the unknown is a pattern of growth Pedretti has been going through for years. The actress has been open about having Attention Deficit Disorder, which was a challenge while she was in school. Combine this with, at times, feeling inadequate in acting classes and being told she’d never make it, and Pedretti had herself an uphill climb to success. But considering the fact that she’s now been in a small handful of major Netflix shows (not to mention other projects), I feel confident in saying she proved her doubters wrong. She knows, though, that for other young people struggling with ADD, it can be hard to push through.

“​​I feel like you just have to know that you’re doing your best,” she says of what she wants others with ADD to understand. “And trust that you know what that is. A lot of kids with ADD develop, I’ve read, Rejection Sensitive Dysphoria, because of the amount of negative feedback people get, and that isn’t actually representative of how their brains work. It’s being interpreted as lazy or selfish because of different symptoms of ADD, and people internalize that. And that takes time and effort to heal from.” 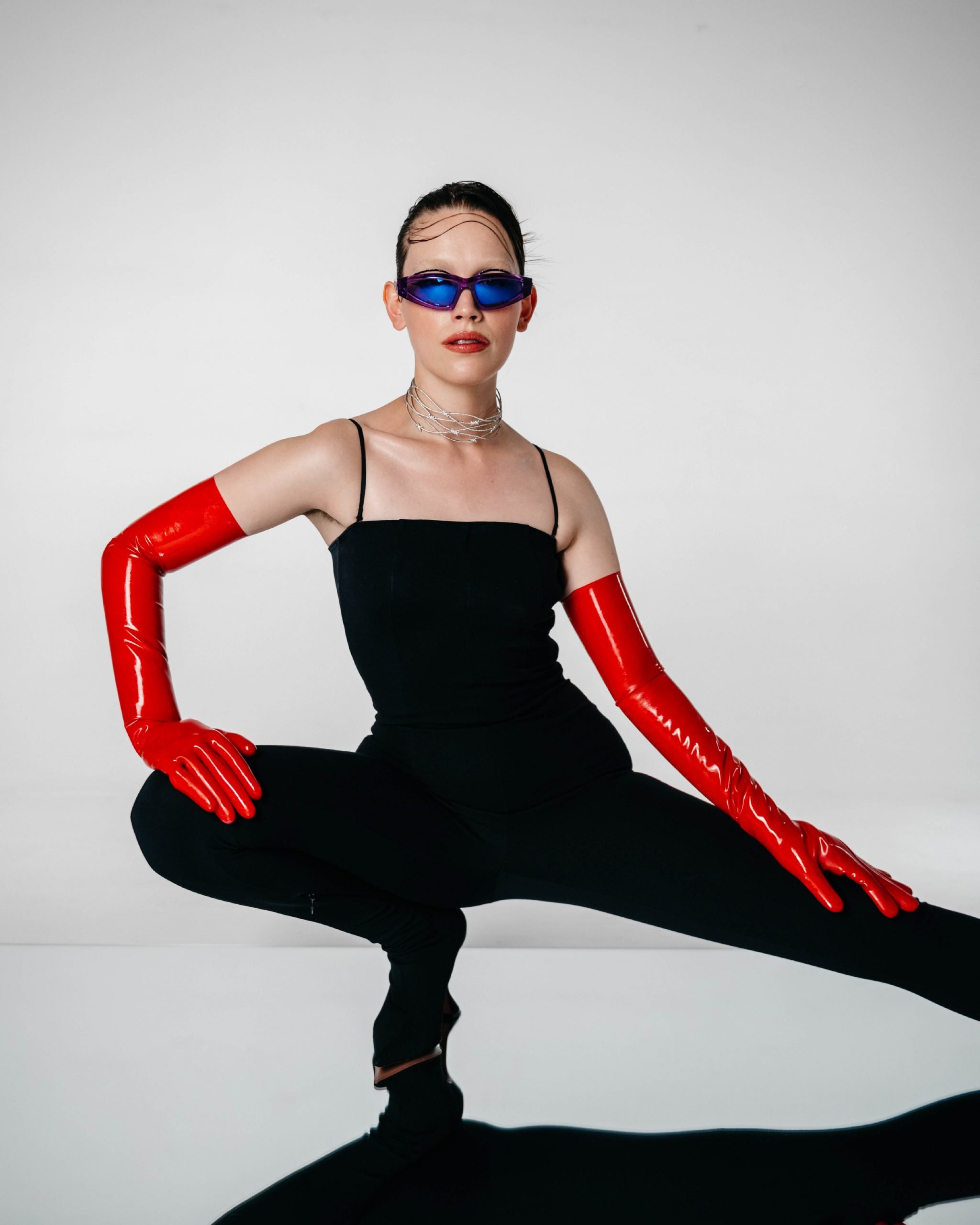 Her healing has been a journey and her work has helped her manage it. But even as she experiences her successes, she still has moments of questioning where she came from, where she’s going, and what she’s doing. Through it all, though, she’s grateful as hell for her opportunities, including those on the horizon (which she’s low-key mum about sharing). Much like her You character — who I think will remain one of her most iconic roles, no matter where her career takes her — Pedretti is a woman just out for happiness and figuring shit out.

“Life’s just hard, and being a human is hard,” Pedretti shares as we wrap up our call. “And a lot of our struggles are really relatable, and we’re not as weird as we think we are. I think a lot of us struggle with feeling lonely or isolated or like nobody understands us. But that in itself is a human experience. That is not unique. Know that if you’re struggling, you ain’t special. You’re human.”