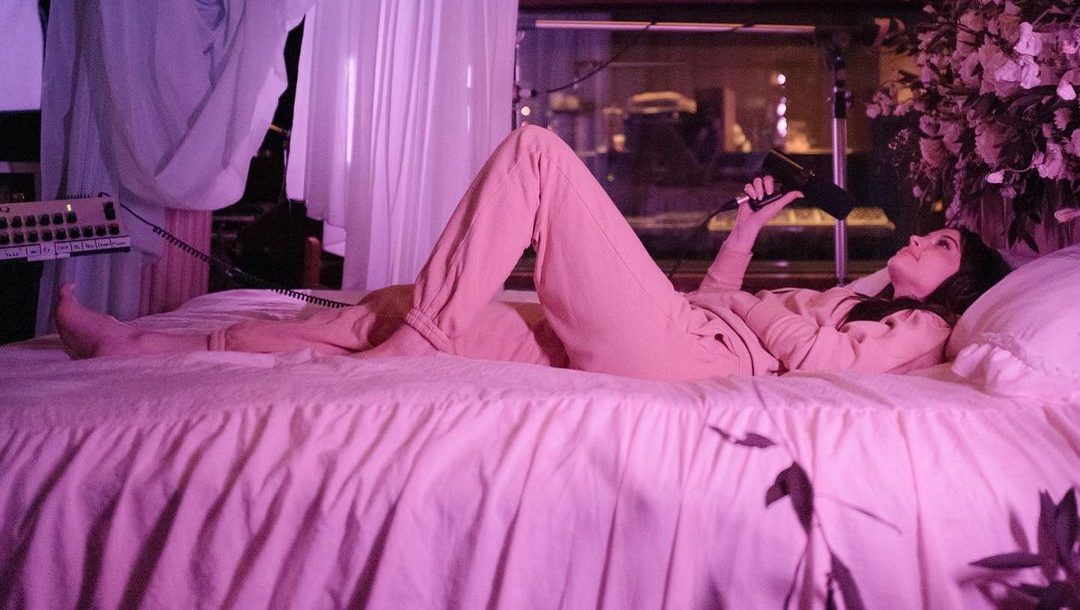 Country-pop sensation Kacey Musgraves invited the world to fall apart with her in her newest album Star-Crossed. The album sonically depicts the heartbreak and grief she went through from the past year.

In a joint statement, Musgraves and husband Ruston Kelly announced their divorce after two and a half years of marriage in July 2020. Since the announcement, She has been open about her heartbreak and pain. Now, she’s ready to share her catharsis through her new album and accompanying film.

The album kicks off with the title track “star-crossed,” where Musgraves sets the scene of her personal tragedy. Heartbreaking harmonies and gentle Spanish-inspired guitars are prevalent throughout the song and the entire album, which sets the tone for what’s to come. Musgraves starts out as the troubadour of her own story, setting the scene for listeners of “Two lovers ripped right at the seams,” before diving straight into the painful moments of her marriage ending, signing the divorce papers, and giving back her husband’s name.

In the Star-Crossed film, listeners are taken back to the “simple times,” where Musgraves is yearning for the past and who she once was before her marriage. While she’s struggling to cope with major adult issues “’Cause being grown up kinda sucks,” she sings about her youth, where she “Put my lip gloss on” and liked to “Kick it at the mall like there’s nothing wrong.” The film depicts Musgraves and her friends as the anti-matrimonials, a group of criminals that ransacked a wedding dress boutique, referencing a time when Musgraves wasn’t interested in dating, let alone, marriage.

In a HITS Daily Double interview back in 2018, Musgraves opened up about how meeting her then-husband changed her perspective and her writing experience. “I’ve never had love songs or relationship songs. I write about other things, other people’s stories or perspectives. When you’re with someone you truly love to the core and they feel that way about you, there’s no sense of panic — or that it’s going to come apart,”

The last scene of the film shows Musgraves trading in her ivory tweed Chanel skirt suit for a soft, feminine,  yellow dress paired with pearls as she transforms into a wife.

“good wife,” takes us back to the beginning of the end of Musgraves’s marriage, where she’s trying to navigate being the wife she thinks her husband needs, despite her own personal concerns. She sings about the stereotypical traits and behaviors usually associated with a good Southern wife like, “Waking him up nice and slow, bring him coffee in bed,” and “Try to loosen up and be more fun.” She begs God to help her to become the good wife because she needed him as much as he needed her. The song is Musgraves’s way of re-examining her own ideas of marriage and what it means to be the right kind of wife. In her interview with Elle earlier this year, Musgraves explained, “I come from a family full of long marriages. My grandparents met when they were in second and third grade, and they’re still together in their eighties.”

Growing up around the idea that the first person you marry is the one you’re with for life had Musgraves feeling like she “was in some ways a failure” for divorcing her husband. And even though she knows that she’s independent, she demonstrates her vulnerable side, admitting that  “without him, this house just wouldn’t be a home / And I don’t wanna be alone.”

Musgraves reflects back on her failed marriage in “justified” as a part of her own personal journey into grief. The album perfectly outlines the many stages of grieving, but “justified” beautifully sums up the idea that “healing doesn’t happen in a straight line.” When we think of coping and healing, many think it should happen a certain way within a certain timeframe. But Musgraves challenges that notion, singing about how messy and turbulent healing from heartbreak can really be. Whether she’s crying one moment and laughing the next, she accepts her emotional state and understands that they are a vital part of her personal journey towards acceptance.

In the song “angel,” Musgraves is deep into the bargaining stage of grief, lamenting that if she were an angel, “I wouldn’t have to try / So hard to save you or show you how to fly.” The song continues to go into all the things she would’ve done differently if she were an angel and also offers an underlying sense of bitterness as well because the the angels that she called upon in “star-crossed” to save her marriage never came. While Musgraves understands that she would’ve had the power to prevent her marriage from falling apart if she were an angel, she also realizes that maybe things wouldn’t have gotten as bad as they did in the first place.

“camera roll” depicts Musgraves’s lowest point, when she gives into the temptation and scrolls through the past photos of her and her ex husband together. She sings about how easy it can be to scroll back and look at all the good parts of a failed relationship and losing herself to grief all over again. She croons about how the “cruel evidence” of her past is not something to back through. But despite the grief and pain it caused, Musgraves reaches a turning point where she’s able to thank her ex husband. She sings, “For all the nights and the days / And everything that you gave / I’ll never erase it.”

Musgraves sings about her dissatisfaction with the contemporary dating landscape in the song “hookup scene.” The song talks about how hooking up can provide temporary satisfaction but in the end leaves you feeling more alone than before. While the thrill of being with someone new without the attachment might be fun for a while, Musgraves admits that she craves that real connection she once had with her husband. She sings, “It’s a chapter that ain’t coming back / I could have learned to love it more.”

In “what doesn’t kill me,” Musgraves sings about her resilience and strength. It is a turning point on the album, representing the final stage of grief and coming out of her heartbreak stronger than before. Lyrics like, “I’m not afraid to connect with something real / And just let it go when I know / That it just don’t fit in” represent finally freeing herself from the pain and heartache. Star-Crossed juxtaposes with Golden Hour and there are many references and lyrics that clearly represent that distinction; but the lyric “Golden hour faded black” is the most poignant line in the album and a stark reminder that the Golden Hour era has ended.

Musgraves closes out the album with a cover of “gracias a la vida” by Chilean folk singer Violeta Parra. In a recent interview with NPR, Musgraves discussed her love and respect for the Spanish language and why it was so important for her to end Star-Crossed with the song. “I think it’s interesting that this song was on the last album she had written; she did commit suicide. I think that adds to the intense, tragic and sorrowful nature of what this song is saying ‘thank you’ to life. You’ve given me so much. You’ve given me the beautiful and the terrible. You’ve given me the pain and the laughter. And I’m thankful for all of it. It’s saying: ‘I’m grateful to be alive.’ And I just thought, what a beautiful way to end this record, this chapter where I’ve done so much self-exploration.”

Star-Crossed beautifully chronicles a universal story of pain, heartbreak, and the healing process that follows. While the album is a tragedy at its core, Musgraves narrates a larger story of a woman’s vulnerability and power through a time of darkness.