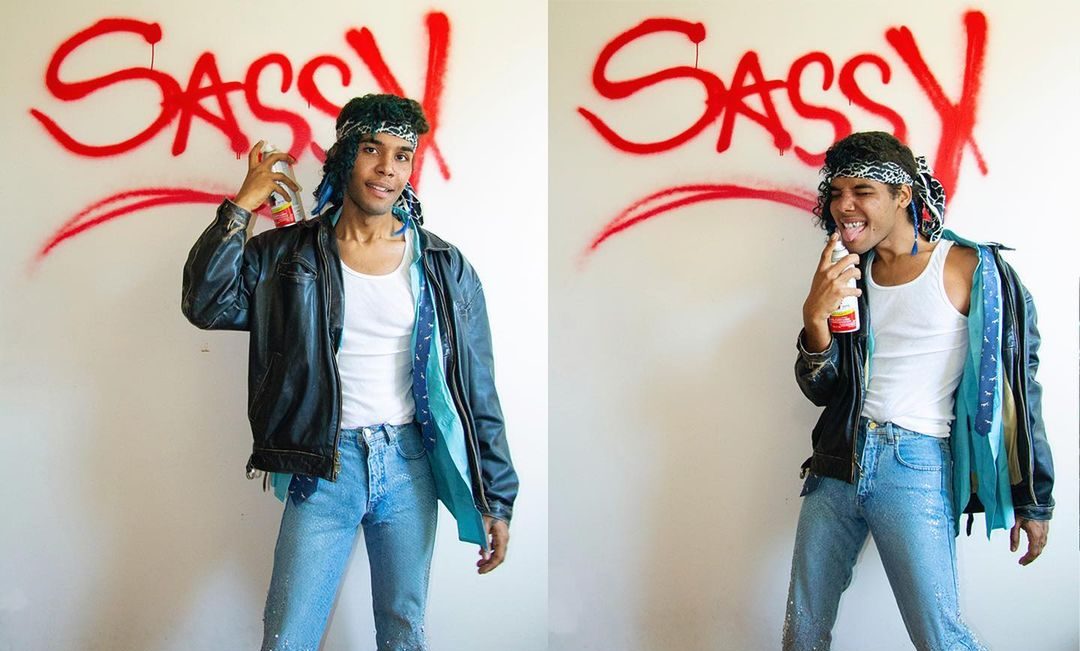 The singer talks the inspiration behind his new album 'Sassy,' creating visual art, and breaking boundaries.

Kyle Dion fashionably displays versatility and ambition in every track of Sassy. As he describes the new 17-track album, it’s “breaking boundaries of what people’s expectations are for R&B artists.”

For artists like Dion, he understands how to bend gender normalities and express emotions through his visuals. The four singles that were chosen to be released prior to Sassy include the feel-good nostalgic “Placebo” featuring Ja Rule, the charismatic Kari Faux collab “Purr,” the saucy and sexy “Parmesan,” and the playful “Money.”  His journey throughout R&B is nowhere near completion, and he’s continuing to explore his musical freedom while “making jokes and talking shit.” With previous projects like Suga and Playing Sounds, one can’t truly get too comfortable with Dion’s style of music, since he “tends to make sure there’s a different dynamic” in his albums. The Florida native hopes that fans enjoy seeing this bold, sassy side of him throughout the 45-minute album.

Prior to the release of Sassy, I joined a video call with Dion to discuss the genre-bending project, its equally bold artwork and his collaborations on the album.

Since you’re from South Florida, how’s your life in Los Angeles been?

It’s been actually really, really good. For what I’m doing, it’s the place to be. I would say nicer weather here, because there is less humidity. But it’s been kind of an easy transition. I’ve been here for six years.

Would you say that the music scene compared to Miami and LA is pretty similar or different?

So as much as I’d love to talk about being Floridian, this moment is so full circle, since my first introduction to you was “Don’t Go” on Painting Sounds, which was released around five years ago. Compared to your first appearance on Kehlani’s mixtape in 2014 to the near release of your second album, how do you believe your sound has evolved?

I think it’s evolved similar to how I’ve evolved throughout the years as a singer. I’m naturally just changing up like everyone’s always changing, and as you get older, you experience different things, and you may be into different things and that’s exactly what I showcase. My albums are time stamps of who I was at that time, and I don’t know who I’m going to be in three years. I still don’t know who I am, and I am learning about myself every day. But that’s the beauty of it, and I love stamping projects in time, because you can just go back and think about that time and where you were mentally and what was happening around you.

I really enjoyed what you said about seeing different albums as past versions of yourself. It’s kind of similar to a visual photo album. When I think of Kyle Dion, I think unconventional, genre-bending, etc. Not to get deep, but what do you think whenever you describe yourself and the way you make music?

Like I said, I’m learning about myself every day, so as an artist, I feel like I’m very ambitious, and I love taking risks and trying different sounds and flows. I really experimented with that in my upcoming album, Sassy. I looked myself up on Google, and one of the most asked questions was, “What’s Kyle Dion’s genre?” And it’s so cute, because I have so much range to do a lot of things, and I never want anyone to expect a certain thing for me. Michael Jackson was a pop artist, but he made an R&B album and his albums are different sides of him experimenting with genres. So, this album won’t sound like the next album. This album doesn’t sound like the one before it. It’s just how I go about making stuff.

I’m glad that you don’t limit yourself and put your talent in a box. Do you have any musical influences?

Vocally, I would say Whitney Houston, and musically I’d say Pharrell. Last night, my friend and I were listening to Lemon by N.E.R.D., and when it came out in 2017, I didn’t really resonate with it. But now I am, I resonate with it so much, it’s so dope. I feel like that’s what Pharrell does. He doesn’t necessarily make things for now. He knows where music is heading and where it could go, and I feel like that’s how I’m approaching music as well. There’s a lot of amazing artists that are coming out right now and doing the same thing, so I’m seriously excited for the future of music.

Since “Placebo,” “Purr,” and “Money” were your first three singles after the start of the pandemic, did the lockdown influence your creative process?

I would say that it influenced it a bit since we were in a lockdown and we were creating it. I was just looking forward to where we would be in the future, and how I felt like everyone would need laughs and fun, and we just wanted to not be trapped in the house and be sad. So I wasn’t making music for the present moment, which was the lockdown. I was making music for now, when people are outside and having fun with their friends and family members. I think it’s a perfect moment to release that kind of music right now.

I love your new collab, “Placebo,” with Ja Rule and your previous collab with Duckwrth and UMI.

Shoutout to UMI and Duckwrth that was an amazing moment, but it was short lived, though before we went straight lockdown. But we did get to perform it once all together, which was my last show for lockdown on Valentine’s Day in 2020, and it was a great moment.

Do you have any dream collaborations?

Earlier I mentioned Pharrell, I would love to get into the studio with him. Also Rosalia, I think she’s very talented, and she actually liked my tweet the other day and I like pissed my pants.

I love that you’re manifesting that, so it’s going to happen. I’m going to start this by saying I love the music video for “Brown” and seeing a Black woman as the love interest. You’ve had the most unique album art and music videos I’ve seen, where does the inspiration for this come from?

I love the visuals just as much as I love making music. It’s just about how I feel in the moment and what comes to mind. I’m inspired by the people around me, so for Sassy, there’s a friend of mine who is an artist, and he had this painting of this guy’s mouth that was extremely big, and it was an inspiration for my new album cover. So it’s all about being in the moment and what’s going on, so I’m just using my imagination.

I love this for you, and I can’t wait to stream Sassy. Since the summer, everyone’s releasing so much music, and I’m kind of overwhelmed to listen to everything…but in a good way.

I think people are nervous to, like, drop albums right now, and I’ve gotten to the point where I’ve been making this album for like the last two years. I feel like I’m moving and evolving every day, so I want to make sure that I’m the person to represent this album at this point of time. I want to make sure people feel my authenticity, because this is truly who I am. I’m excited to be able to have the opportunity to [release Sassy] and see what it does, because you never know what something can do if you don’t put it out.

So you already shared the artwork behind Sassy with me, but what’s your inspiration behind the title?

For the title, I’m a really big advocate of fucking up what society thinks gender normalities are, whether you’re more feminine or masculine. I’m so loud and crazy and just having a good time in my life, so I wanted to call it Sassy because it references my own Michael Jackson Bad moment. Bad was a more pop-leaning album, and the lyrics represented his own life. I really am very sassy, very loud, very bold, and I love making jokes and talking shit. I don’t really take anything seriously, and I’m just a fun guy and I wanted to show that in our body of work.

What are you excited for fans to experience with Sassy?

I’m excited for them to get a side of me that they’ve never got unless they follow me on social media. I know there’s a bunch of fans that don’t necessarily follow me on Instagram and just follow me on Spotify, so they get to see my personality through the music versus my posts. It’s also exciting for them to hear the ambition and breaking boundaries of what people’s expectations are for R&B artists. When you make one [type of sound], there’s a belief that you should make it for your entire career, and that’s just not who I am. So I would hope that they get to hear the versatility and laugh and smile a little bit. Every song sounds different, and that’s one thing I tend to do as well as make sure there’s dynamics within my albums. If it’s too cohesive, it fucking bores me, and I can’t even listen the albums like that. I need to be in a whirlwind, like I need to go through an album where I just experience so many feelings, so I hope they get that.

Listen to Kyle Dion’s Sassy below.

This interview has been condensed for clarity.