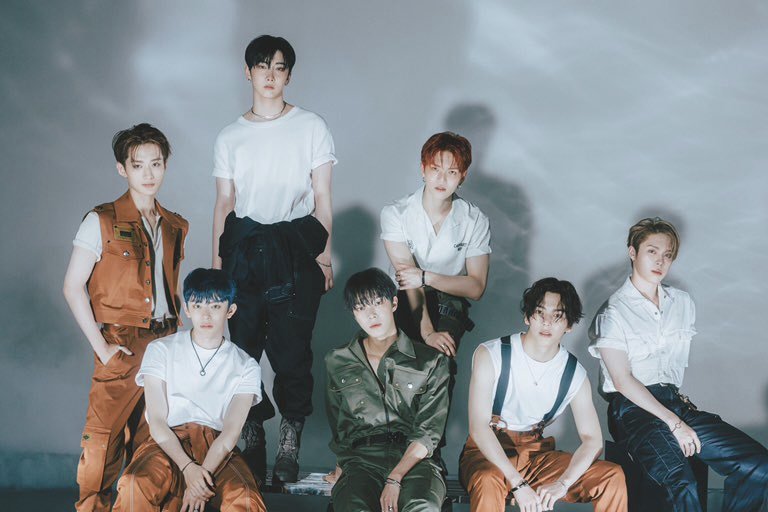 When the members of VERIVERY come together — that’s Dongheon, Hoyoung, Minchan, Gyehyeon, Yeonho, Yongseung, and Kangmin — there’s no stopping what they can do.


The seven-member group debuted with a bang in 2019 with the single “Ring Ring Ring,” showing audiences right from the start their endless strengths and capabilities. Over the years, they’ve garnered a worldwide fanbase (named VERRER) and are well on their way to dominating the K-pop scene with their distinct musical style.

This year, VERIVERY are in the midst of their Series ‘O’ era, an extension of last year’s three-EP-long FACE it series that delved into the idea of facing oneself, others, and overcoming barriers. This past March, the first part of Series ‘O,’ a single album, SERIES ‘O’ [ROUND 1: HALL] was released. Now, five months later, the group have returned with the next installment aptly named SERIES ‘O’ [ROUND 2: HOLE]. In this album, the group goes even deeper as they confront their inner darkness.

From the fierce lead single “TRIGGER,” to the heartwarmingly fun “Prom,” each track on the album uncovers a more dynamic layer to VERIVERY. The group never stops at the surface when it comes to sounds and visuals, and they’ve truly created a solid record that everyone can enjoy.


Before SERIES ‘O’ [ROUND 2: HOLE]’s release, we sat down with VERIVERY over Zoom to discuss their excitement for their new album, Minchan’s return, and more.

First, congratulations on the comeback! Can you tell us a bit about your new album SERIES ‘O’ [ROUND 2: HOLE]?

Minchan: We introduced this album, SERIES ‘O’ [ROUND 2: HOLE], with the last album. In the last album, VERIVERY received an invitation from an unknown person. However, it was who we didn’t want to face and its emergence led us [to] get stuck in our own place of darkness. Also, this album has two meanings that relate to the Korean word “잠기다” (“to sink”/”to be locked”). Hopefully with this album, if you look at it from an omniscient and observer’s view, you will enjoy [it] more than before.

Minchan is back as well, which everyone is really happy about! How does it feel to be promoting as a team of seven again?

Dongheon: Last album, we were without Minchan and we couldn’t fill his empty spot, so with this comeback we are very pleased to be with him.

Minchan: Honestly, when I was at home alone, I felt sad when I was watching the other six members on stage. But because of this, I’m so excited and happy to show a perfect stage with all seven members.

You’ve said before that Series ‘O’ is about going deeper and facing the darker sides of yourself. Compared to your single album [ROUND 1: HALL], what do you explore in this album?

Yeonho: With the five months without an album or track, we were able to work on and strengthen our teamwork. Even though on [ROUND 1: HALL] we showed great teamwork, in this album, we show better teamwork than before.

Yeonho, Gyehyeon, Dongheon, and Yongseung — you guys composed the song “Prom” on the album. What was that experience like, and what were you thinking when writing it?

Dongheon: We got inspired from a concept of a “prom party” — like home parties that [people] could enjoy these days during COVID-19. We want fans to have fun during this era, so hopefully fans can enjoy [themselves] with “Prom” as well.

Do you each have a favorite song off the new album?

Yeonho: We all want to emphasize “Prom” again — we believe it’s the best track on this album!

Dongheon: I also want to mention the fourth track “Heart Attack,” because I personally like EDM. With that strength of EDM, you can feel the power of VERIVERY, so I hope fans will enjoy it.

In your music videos, your fans have gotten to see your good acting skills! If you could star in a movie, would you want to play the hero or the villain, and why?

Hoyoung: I usually like the villain more, so I choose villain. I feel like they’re more attractive.

Kangmin: I want to try a hero because I believe my face is more closer to a hero rather than a villain.

Preparing for a comeback can be difficult and stressful. What was one thing that you struggled with while making the album and how did you overcome it?

Yongseung: One of the hardest parts during this preparation was the choreography. Usually the choreography is very harsh and powerful, but this album’s performance and choreography is more powerful than before. It was quite hard, but because of the members, we could go along together, and it was great. It was fun to prepare this album!

Which b-side do you think fans will like the most from this new album?

Hoyoung: I think a lot of our fans will love “Underdog,” because, I like it a lot! I like the chorus bit where I rap and Dongheon raps, so it’s a bit catchy as well. I think it’s going to gain a lot of love from our fans.

During the pandemic, you’ve done a lot of online activities for your fans. Do you have any favorite moments that you’ve made online with VERRERs?

Yeonho: Our favorite moment was the first fan meeting which was unfortunately online because of corona that day. But, it was a very special moment. It was very fun to interact with fans, so I think that was our best moment during the pandemic.

Dongheon: Also, because of the pandemic, it was really hard and challenging to meet fans all around the world. But due to the technology of video calls, it was so good to meet fans through video form, and it was a great experience.

Lastly, what would you like to say to your fans who have been waiting for this comeback?

Hoyoung: I want to say one thing to our fans: All of our VERRERs all around the world, thanks for loving us and waiting for our new mini album. I hope you like our title track “TRIGGER.” We’re trying our best to show the best performance for you guys, and please wait — we’ll visit you guys as soon as possible. Thank you, VERRER!

VERIVERY’s new mini album SERIES ‘O’ [ROUND 2: HOLE] is out now. You can stream it below on Spotify.