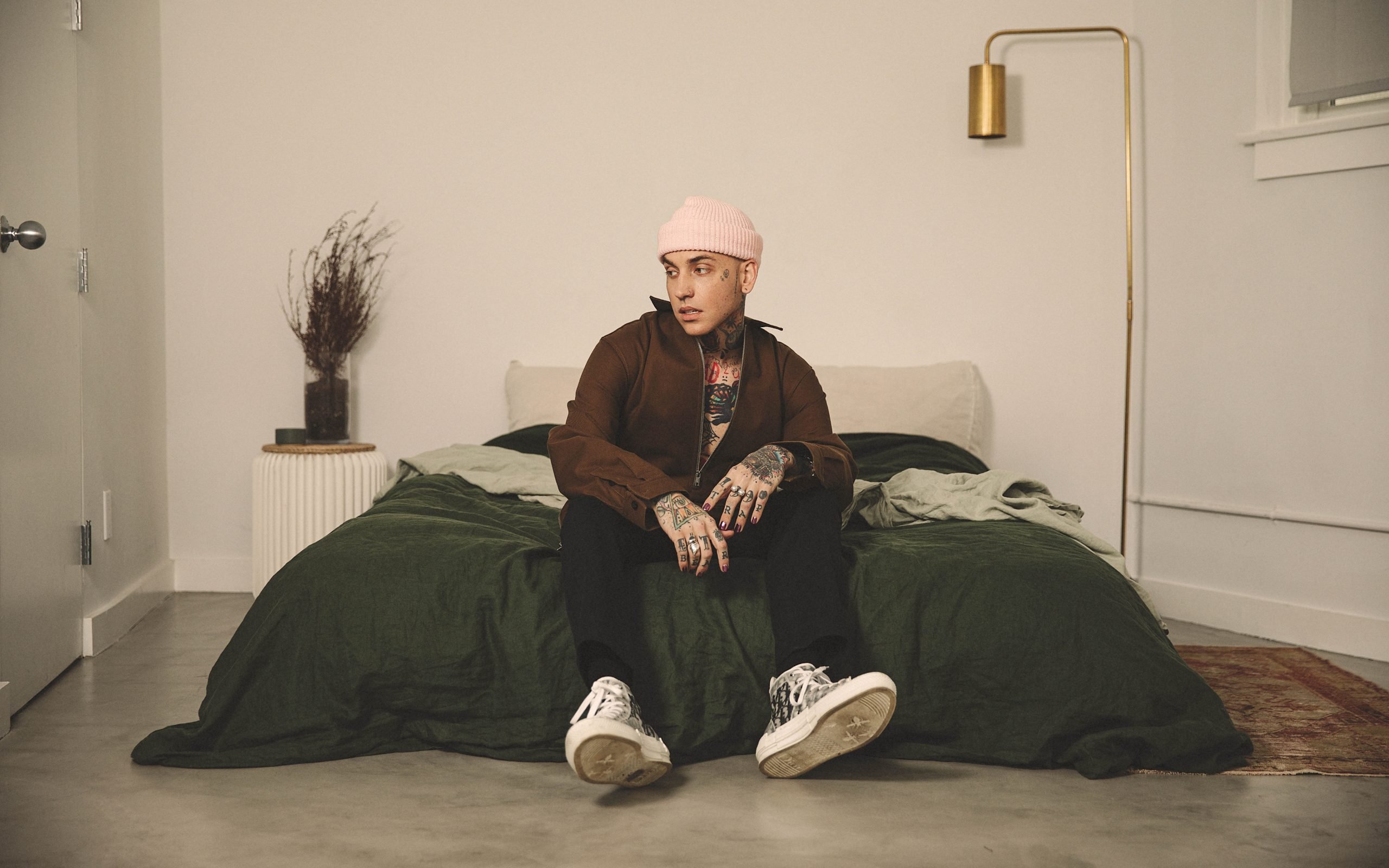 As an artist, blackbear is always changing and evolving. His new EP, misery lake, out today, is a testament to how much he’s grown since he started out in the music industry and how much he pours into every single song he makes. It’s a collection of songs that demonstrates his ups and downs over the past year and throws into sharp perspective how willing he is to be open with all the music he creates.

The creation of misery lake started with blackbear’s latest release, “@ my worst,” which dropped a week prior to the EP. He’d been teasing the song for months, though, in anticipation of finally rolling it out. “I was at a writing house kind of writing for other artists and I wasn’t really paying attention to making new blackbear music and this song inspired me to make a whole EP,” he says of how it all began. “It was just so me and it wasn’t any other artist. Not for one second did I think to give this song to another artist.” With it came a video inspired by Jimmy Eat World’s “The Middle.” Not overly produced or choreographed, “@ my worst” was instead a party and exactly what blackbear wanted. “I don’t really like big-budget videos and green screens and stuff like that. It’s just not my vibe. Having a party was just really fun,” he says, also pointing out that the party guests in the video were mostly his friends. “Plus, they got paid to be there,” he adds with a laugh.

The song falls seamlessly into the new EP in its raw honesty of how blackbear (whose real name is Matthew Musto) was feeling when he wrote it. Each song contained on the six-track project was born out of a different day’s feelings, but as a whole they tell blackbear’s story. “I think that day [writing ‘@ my worst’], I was kind of all over the place,” he says. “The vibe where I was feeling good one day and then I’m feeling really shitty the next day is how this all went.”

But even though there are high points on the EP, blackbear called on the lows for the overall theme. With the COVID-19 pandemic controlling the entire world throughout 2020, the artist was feeling the heightened effects of his struggling mental health, a topic he’s always spoken freely on. As he was muddling through those feelings and posting his requisite emotional social media updates, he found himself constantly hashtagging things with #MiseryIsland and #MiseryLake. That feeling became more than a hashtag when it earned the spot as the title of the EP.

“It kind of felt like that’s where I was at in my life,” he shares about feeling isolated. “I was on this lake of misery, just an island somewhere just unhappy and dark and cloudy where it should be paradise, but I was just not feeling it.” His lake of misery became the grounds for the new project, which he considers an “oath to isolation as opposed to quarantine and just kind of mental health in general.”

On the EP, blackbear shares the spotlight on a few tracks with other artists, including “u love u” with Tate McRae, which came out earlier this summer, “ghost town” with Sasha Alex Sloan, and “imu” with Travis Barker, not to mention the bouncy “bad day,” which was co-produced by Charlie Puth and a song blackbear calls a “guilty pleasure.” And though I told blackbear that I consider him the “King of Collaborations” — he’s worked with more people than I can count at this point — he actually is quite protective of who he’s willing to work with. “I keep the collaborators very, very small when it comes to the blackbear project,” he says. “I just recently started working with Travis Barker on some stuff and Benny Blanco on some stuff, but I keep the circle very small.”

One mainstay throughout misery lake, though, is blackbear’s producer, Andrew Goldstein, someone blackbear holds in extremely high regard. Goldstein is someone blackbear admired long before the producer was willing to work for him, though, and it took some time and convincing to win him over. In the end, though, Goldstein came on board, and the two have worked in synchronicity ever since. “It’s very seldom that I work with other producers besides Andrew,” blackbear shares. “Andrew and I, we’re just like peanut butter and jelly. He finishes my sentences musically, and he just speaks my language.”

Goldstein has also been by blackbear’s side as his music has evolved over the past couple years, turning into a sound that’s a far cry from his early days. WIth each new release, blackbear changes ever so slightly while still staying true to himself, but it’s his actual life’s moments that demand that evolution. His 2017 album digital druglord, his first major label release, is often cited as a pivotal moment in his discography. But as much as fans love that album, it’s one that blackbear is happy to leave in the past.

“I think I just became a lot healthier and I stopped doing cocaine and I stopped drinking, and over the years I got more clarity,” he candidly shares. “My writing changed because my brain was functioning at more of like an 80% capacity, 90% capacity. When I was on substances, I was kind of just mumbling in my music. And I think the music served a purpose at the time, and if you love that music, you can always go back and listen to it, but I’ll never make another digital druglord. I’m always going to keep evolving, and I’m always going to keep improving my songwriting and production.”

Part of his journey to becoming who he is now has been the joy of having a child. His son, Midnight, whom he shares with fiancee Michele Maturo, was born in early 2020, just before the world shut down. And even though this forced break from everything was hard on his mental health, blackbear found the bright side in the fact that he got to spend the first year of his son’s life watching him grow. “I wouldn’t trade last year for the world because I got to watch the first year of my son’s life and I got to see him from just, like, a little nugget and turn into this toddler that’s running around and talking now. It just blows my mind. Every two weeks, he’s like a different kid.”

I also spoke to blackbear last year in the throes of lockdown as he was preparing to put out his last album everything means nothing. Despite the weight of the pandemic, he was as animated as ever over the phone with his only real complaint being that he couldn’t keep up with his usual manicures. Fans have come to love his impeccable nail art, but with the world shut down, he was left to attempt to paint his own nails at home — which he did not like. But once he got vaccinated and saw the light at the end of the COVID tunnel, he brought his manicurist to him so he could keep up with one of the smallest things that brings him joy. During our most recent conversation, he shared that every new bit of nail art instantly becomes his favorite — which means his current Powerpuff Girls nails are a true winner. “I’m so much fucking happier now that my nails look good,” he says with a laugh.

blackbear is in top form with misery lake, allowing it to bring his catalog into a new state of emotional contentment. He’s someone who deeply cares what his fans think, making his music all the more special. “I want everybody to love everything I do as much as I do,” he shares of the collection. And it’s his love of the fans that make him most excited to be back out on the road right now. He’s currently touring with Maroon 5 and cramming as much of his discography as he can into his 40-minute set each night. All he wants is to give the fans a show they’ll remember, because they’ve done so much for him over the years.

“​​I just want to hear people sing back to me some of the music I worked on in quarantine,” he says of the tour. “I think that’s the biggest deal for me is just hearing the fruit of my labor and kind of just seeing it in real life and looking at the fans in the face again and just falling in love with a fan every night. I love that. That’s my favorite part of the show is that I feel so connected to at least one person in the crowd every night — they’ve changed my life.”

You can hear the product of blackbear’s quarantine on misery lake, out now, and catch him on tour with Maroon 5 through October.