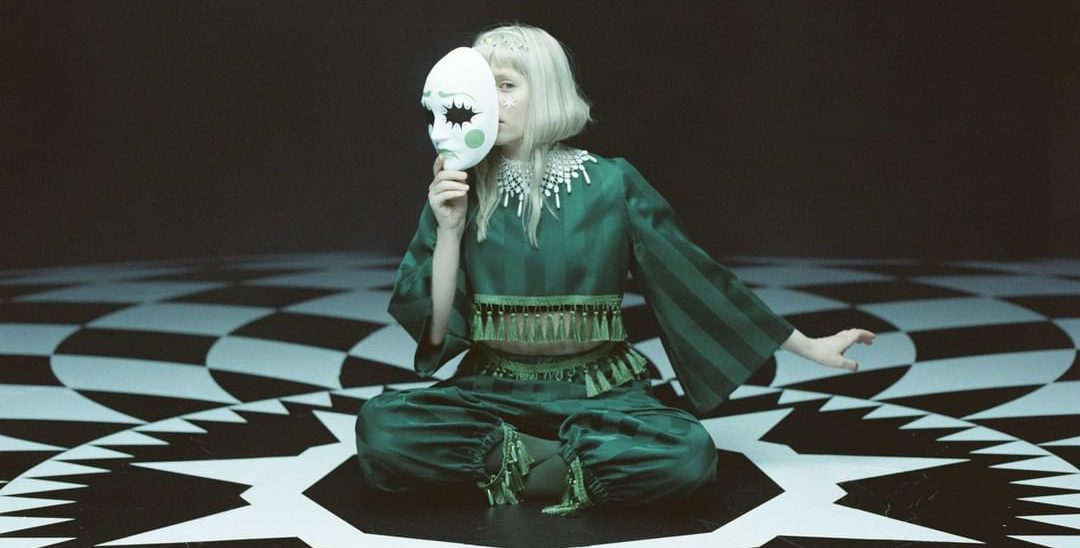 Norwegian songstress AURORA returns with brand new single “Cure for Me,” a glistening, message-driven piece that looks to set summer 2021 alight. “The ‘Cure for Me’ single was actually born two years ago,” she tells EUPHORIA in an exclusive interview. “I was in Australia on tour and then instead of having a day off in between the gigs, I asked my drummer and co-producer Magnus if we could rent a studio for a day and have some fun. I had this theme I wanted to get out of my head [hums melody]. I just really wanted to make a song with this ugly theme and we made it — my team kind of discovered it a few years later and said, ‘Ah, this is lovely, we should make it a single.’”

Speaking about the synth-laden track, AURORA finds herself reflecting on a controversial practice evident around the world. “It was originally inspired by those countries in the world that still forbid being gay and also the countries where conversion therapy is still allowed,” she says. “I think even in Norway it’s allowed — that’s the main reason I wrote this song. I was like, ‘I want to make a fun, celebration song about I don’t need a cure for me, I don’t need it, I’m perfectly fine.’ It’s absurd how the world can ever think that people will ever need a cure for love. Then I also know that it can mean a few different things, which I’m excited about, but it’s mainly the fact that it’s very easy to make people believe that there is something wrong with them. People tend to go to that fact so quickly — it takes so little before we’re like, ‘Oh, something is really wrong with me. I didn’t react the same way that they did, I must be fucked up.’ Or, ‘I don’t look like them; OK something is wrong.’ You know, we think something is wrong with us all the time and the media is telling us we’re not good enough. Everything all the time is trying to make us think that we’re insane. That’s kind of sad isn’t it? So it is kind of an opposite thing.”

With “Cure for Me” evoking a deepened understanding of an important subject to the artist, AURORA finds herself looking inward. “I am very lucky because I’ve never been that affected,” she shares. “I’ve been told many times in my life that, ‘You’re a bit [makes cuckoo bird sound].’ I’m very little Norwegian in many areas; I’m very Norwegian in some. It’s a very strange culture here and if you are very open, emotional, impulsive, and if you have a bit of a different brain, [it] doesn’t take much before you get aware even as a child that, ‘Oh, I am a bit different’ and it messes with your head a bit. It messed a bit with my mind in the beginning when I first started noticing it. I’ve never really cared and I don’t care now — I find so much joy and liberation in simply existing in the way that fits me the most. That’s a joy I find hard to let go of. We’re so diverse and that’s the whole point. That’s the foundation in our species that we are all different and we still manage to twist it around and make people feel bad about it.”

With the pandemic pushing live music events back further and further, the singer is eager to explore the track in a live setting. Speaking about her feelings from the release of the new single, AURORA says, “I wish I was nervous because I love being nervous, it’s like being in love isn’t it? But I am not nervous, I rarely am — it seems like a waste to me to be nervous about something I can’t control. But when I’m done with it, I need to just release it and it’s out of my hands, out of mind and out of sight — it belongs to the world. So no, I’m not nervous at all, but I am very excited. It’s always interesting and a fun experiment to see how people react when you do something a little different. It varies a lot what people think about it, so that’s very interesting to watch.”

Describing the process of creating the track, she says, “I like experimenting with the people you have around you. I like using the people I love and I like working with close people, you know. I feel like you don’t need to look out and search for the big names out there when you have talented friends, and you can just make music with them instead. Magnus is very good — I love working with him because he doesn’t write lyrics and interfere too much. I can’t write with anyone because I don’t like it so much, so it’s nice for me to be able to write and do what I want. When we produce the music we are sometimes very on the same page and sometimes we disagree. It’s fun to either fight for your opinion or learn that you were wrong, and I love that. We just have fun.”

Six years ago saw singer-songwriter AURORA release “Runaway,” the opener to All My Demons Greeting Me as a Friend, an album that saw her career catapulted into the stratosphere. Today “Runaway” has 275 million streams on Spotify, 140 million views on YouTube, and is rising week over week in the Official Singles Chart Top 100. Not only this, the track has also been given new life on social media app TikTok and is being streamed 2 million times daily. The roots of “Runaway” emerged at 11 years old, AURORA says. “I often think about that — of course our mind I guess perceives the past like, ‘Oh my God, it went so quick’ and I can remember things from when I wrote the song when I was 11 and now I’m over 10 years older than that. It is weird but I guess I remember the times, I’ve been really depressed two times in my life and then time moves so slowly that it’s exhausting and suffocating, so I feel like it’s a very good sign when you feel like time has gone past.”

It’s hard to believe that in 2015 the track found its way to the ears of a then-12-year-old Billie Eilish. It arguably led to Eilish starting her music journey — a career that has made her a global phenomenon. The track, AURORA says, has found a brand new life out in the world. “It has lived its life and therefore the success ‘Runaway’ is achieving I don’t manage to take it personally because it’s not me anymore, you know?” she says. “It’s sort of like, it’s a baby and every song is a child when you make them and it’s best part: making the child. It’s the most fun in every way, I think, in all possible metaphors. But I think when you raise the song, it’s a teenager or an adult and you just have to let them go and let them live their best life out there.”

Reflecting further on a younger version of herself, AURORA explores a very different mindset from that age and then now. “I remember when I first started writing I was really aware and had this epiphany that, ‘Oh my God, music can help with so much and music can speak about the unspoken. It can explain the unexplainable and put words into these impossible emotions,’” she says. “It has to do with being human. I took music very seriously, music was always very serious for me — very emotional and very explosive. Like a medicine, but I took it really seriously and I have so many sad songs. They all have a little light in them, I don’t manage to bring out sadness unless there is light to complement it I guess. I have so many sad songs and with time I kind of learnt that, ‘Oh my God, there is a whole world out there and people also need to dance and have fun in this life.’ I kind of learnt as I grew older that I can write songs that are fun and I can address things in the world that I love and hate, and I can speak up. Music can be much now: it can be a political force, it can be an emotional force and a release. Now I’m just enjoying all the signs of it. But it’s changed a lot, I’m more open now to what music can be, which is delightful.”

The human experience is a theme AURORA touches on throughout her musical output, however the physical act of producing art has been a huge outlet for the artist during this time. “I am very comfortable with this staying-inside-being-anti-social situation,” she shares. “It’s very good for me and I’m actually enjoying it quite a lot. Even though I can feel it in the people that [there is] this itch under the skin. I can feel the itch for things to change and go back to normal, but I’m also really enjoying things as they are now. I’ve been painting quite a lot. I always find it very intimidating to paint big pictures, obviously you know, it’s very easy to make a small piece of art, for me at least. I’ve been trying to make a really big one so it’s really big, and it’s very scary; but it’s very soothing. Painting to me is like the same as music but the opposite, because it’s an outlet for the art and it’s quiet and serene. While music is very explosive for me so it’s a very nice thing to have in my life. I feel very balanced.”

AURORA’s brand new single “Cure for Me” is out now on streaming platforms and YouTube. You can catch AURORA on short US tour this November, stopping in New York and Los Angeles. Tickets are on sale now.