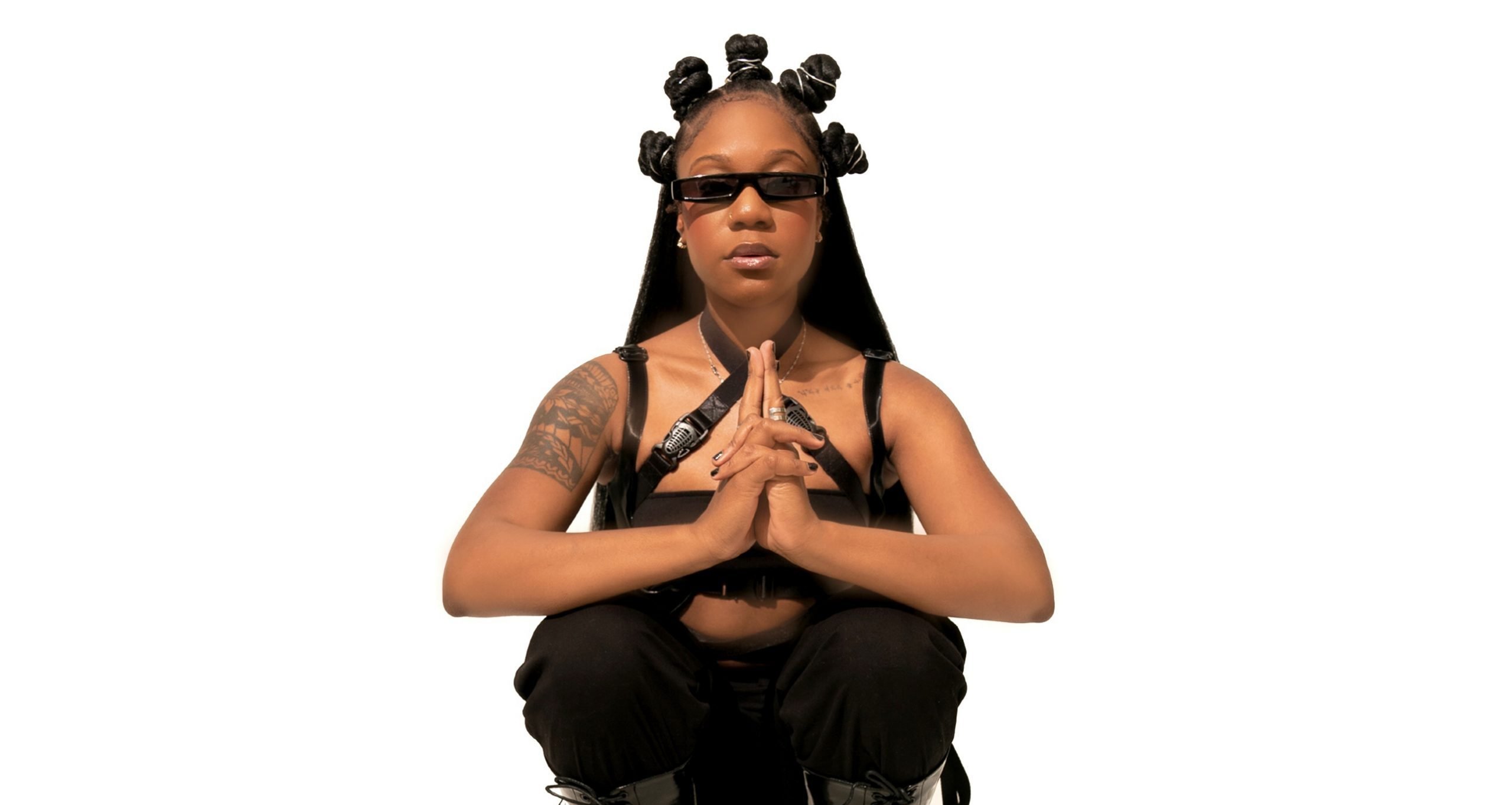 Rakiyah is on the verge of something great — it’s written in the stars. The R&B singer has committed to fully growing and focusing on her artistry, and her unique identity is as a Black rocket scientist (i.e. Rakiyah in Space) who sings in English and sometimes Korean. As a former YouTuber who spent several years abroad as a college student, she gained an international mindset that is forming her career goals now. Whether it be collaborating with the hottest upcoming talent from England to Korea, producing, editing, and creative directing her own music visuals, and generally working to expand how Black women can express themselves albeit labels, Rakiyah’s cosmic world is an appealing and fresh twist in the contemporary R&B space.

Rakiyah  took a huge leap of faith in committing to music full time, and with her last EP Into the Cosmos, forthcoming EP The Cosmic Queen, and an eventual full album on the way, she’s building a discography that aligns with her own personal growth. Her latest single is a switch-up to her usual sound, as she proves that yes, you can be a multilingual Black musician unbound by labels.

EUPHORIA. caught up with Rakiyah to discuss her new single, “Naughty x Nature,” her hustle as an independent artist, her love for diverse cultures, future projects, and more.

How long have you been working on this new song, “Naughty x Nature”?

So I’ve been working on that song for the past few months during the pandemic. After I released Into the Cosmos, I obviously want to keep making music, and being stuck in the house and not having a job anymore and not working allowed me to focus on music. It’s part of the new songs I’m making for the EP that’s coming out hopefully this fall, The Cosmic Queen. The song “Naughty x Nature” was originally going to be on the EP, like I wasn’t even going to release it as a summer single at all. Things changed because I traveled to Atlanta just a month or two ago to record music with a well-known producer I’m working with currently. He’s super on board with me and my vision as an artist and just wants to be a part of this so he’s one of the producers on that song. Once I went to record it and hear it as an audio file, that kind of started to give a little vibe, a little feel. It’s something very fresh and different for me because I stick to a very solid, alternative R&B, a little bit contemporary, so this one was allowing me to experiment and be comfortable experimenting. This song, it’s R&B, but it has that very nostalgic ’90s, 2000s rap like Left Eye and Eve, because those are the artists that I looked up to when I grew up, and then, to give that Easter egg of a totally different kind of song at the very end, I think people will really love the whole song, which feels like a project in itself.

So would you want to make more hip-hop-based music in the future?

I don’t know if I consider myself a rapper, but I have tapped into rapping a little bit to the point where I see some skill in this, so I kind of want to cater to it too. Rapping allows you to be way more experimental than just singing R&B and singing pop music. It’s two completely different vibes, and I think right now, a lot of listeners from millennials and Gen Z are in love with people who can do both and deliver it well. Even in Korea, I gave it a shot when I auditioned for Korean labels, and I’m like that’s not bad either. So I think I’m going to do more hip-hop, but I’m going to rap on various genres, and not just a hip-hop beat. I can rap very easily on R&B, pop, similarly to how we know Doja Cat to be with more than one genre. Even Missy Elliott gave us a lot. She can pull out R&B, but she can also rap. I feel like I want to channel that in my music, so yeah I think I’m going to be rapping more.

How does The Cosmic Queen compare to your previous EP, Into the Cosmos?

The really, really cool thing about having a project like Into the Cosmos and then going to The Cosmic Queen is almost, it’s a lot of innuendos in those projects for me. It’s not just the song or the lyricism. Musically and lyrically, it’s about me being much more confident as a woman and the sensual side of me, the alter ego side is The Cosmic Queen. It went from, I’m the girl who loves everything about the guy, I just started making music, to I feel like I’ve really built Rakiyah now as a person. The Cosmic Queen is who I’m always going to be remembered as, but also within the music and the storylines.

Everyone’s going to learn who the Cosmic Queen is because of this project, and one thing that you can feel is growth. To make music that quick, within a few months of each other, and to feel growth, not even just from my perspective, but other people who know me who are involved within the music with me, they’ve seen the growth. I’m experimenting more with production, I’m doing some songs that I don’t think I would have ever done. Even with this single, you don’t go from Into the Cosmos and expect “Naughty x Nature.” I’m so excited to release The Cosmic Queen, I think the world is going to really enjoy that. I’m giving it more than I ever had before. If I had to put my all in a project, push it, go hard, visuals, give it music videos, give it visualizers, it’s going to be The Cosmic Queen. Because that sets the tone for my album next year, and I’m pulling a little bit from K-pop actually. Not necessarily attaching myself to it, because obviously I make different music, but there are things that are undeniable about the Korean music industry and how they create rollouts and their visual presentation. It can be one song, it can be a mini album, but what they do with that visually sells you that product. And I kind of want to create my project with that standard in mind. I think that gives me this extra boost. Not just being able to sing and write songs in Korean as a Black woman, but it gives me this extra edge in music in general that most Western artists don’t know or connect to.

I thought I wanted to shy away from it only because Korea and speaking Korean is such a part of me as a person and an artist, I wasn’t going to do it as much anymore, because I wanted to make sure my identity was seen to be mine, and not just be classified as, “Oh Rakiyah, she’s a K-pop singer, she makes K-pop idol music.” Which, a thousand times I’ve expressed I don’t, I’m just a R&B singer who sometimes sings in Korean. We don’t put titles on everyone else who sings in a different language, or different styles, so I don’t want to be forced to be something else that I’m technically not.

But, I’ve also listened to my fans and what they think of the idea, you know me saying I don’t want to do this, I feel like I’m stuck in the wrong algorithm, but they’re like, they love that part of me. Some of them discovered that part of me, and see themselves being able to do the things that I’m doing, that maybe not that many Black people are doing, and I don’t want to give that up just because I’m scared of being boxed in. The more I go at this, the more I tell people who I am, the more people learn about my music and it grows, they’ll find that out soon. I’m new, what do I expect? Is she American, is she pop or R&B, I get it, it’s new and it’s different.

I saw you tweeted about StayC. Are you still pursuing songwriting for K-pop groups?

Yes, so outside of making my own R&B music, I’m still in the space of getting in as a songwriter within not only the K-pop industry, but also the American industry as well. I’ve already discussed with management, trying to make some connections, so far, just to be able to make music. I’m providing some hooks that sound like sample style voice, I have a very wide range of vocals, so I can go from making a song that sounds like something Kendrick [Lamar] would be on, and give him a hook or sample of my voice, but also make a song that fits Kehlani or make a song that can fit StayC. So just recently I saw that StayC did a cover to “Kiss Me More” by Doja Cat, which we all know that’s a great lovey airy pop song. It’s not a difficult song, but they shocked me with how well they sound with that song, whether it was in English or Korean, it fit them. I’m like, this works for you, this is actually your money. Although I’m in spaces where I’m getting invited to the K-pop writing camps, like some of the Big 3’s, I think I want to try on my own to reach out to much smaller labels and much smaller groups because I think the intimate growth for me and for them would be a lot more beneficial. I’m going to put StayC on my personal bucket list to try to reach out.

Have you faced struggles as an indie artist? What keeps you motivated to keep pursuing a career in music?

As you know, every so often I think about quitting and going back to being an aeronautical engineer and being safe and having a salary, but at the end of the day, I know I just don’t love that anymore. That is what’s pushing me to keep going as an artist, despite how hard it is, trying to sustain myself when I can’t work because I have to commit to music. And every day I’m like, God please say this is worth it, I feel it in my heart that it is, but I’m ready for some signs to say what you’re doing is right, just keep going. Doing the thing you love is so scary, but psychologically I’m the type of person that’s very in tune with life and my happiness. The act of making music brings me pure bliss, so I’m going to keep doing it.

Would you ever want to return to Korea?

I told my manager that I want to go in 2022. I would like to take one month to three months to live there again. I want to take a Korean language course to enhance my Korean, and I would also like to work on some of my album there as well. Maybe with some Korean producers, and I also want to do some songwriting gigs as well.