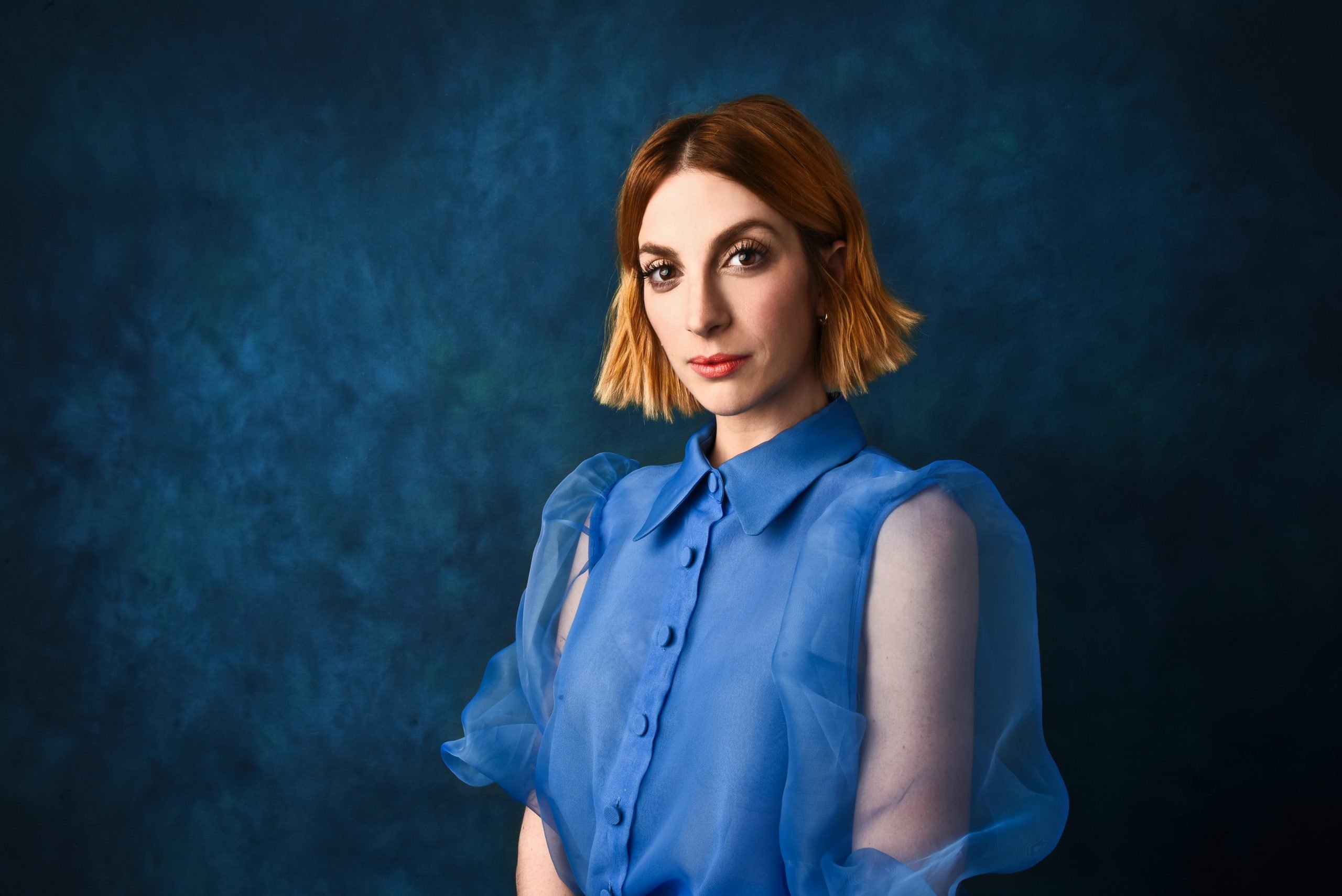 The 'Younger' and 'Milkwater' star discusses how playing a pansexual character helped shape her own queer identity.

Vulnerability has been the core of Molly Bernard’s onscreen characters over the last seven years. For Lauren Heller on the now-concluded TV Land series Younger, the vulnerability exposes itself most prominently in the face of failure; for her debut lead role as Milo in the indie film Milkwater, it is triggered by a blend of attachment and abandonment, fueled by unrealistic expectations.

Bernard in real life, however, is perhaps most vulnerable when exploring the broad spectrum of sometimes chaotic, other times nuanced human emotion through the eyes of characters she couldn’t be more terrified — in the best of ways — to fill the shoes of.

Occasionally, those characters influence her real-life persona, and Bernard experienced just that during her time on Younger in a very intimate way: her role on the show helped her discover and fluidly define her queerness.

“I’m bisexual, and it’s taken me playing Lauren to realize some days I identify as queer, other days I identify as bisexual,” Bernard tells EUPHORIA. “It’s not even that interesting to me … it is a huge, obviously, part of who I am, and I actually love it about myself.”

Bernard continues, “But it’s also not heavy, and I think playing Lauren who is effervescent — she just kind of is the epitome of effervescence — I had a much easier time coming out because I had that lived experience in my body just from playing her.”

Though Lauren’s story is far from a direct reflection of Bernard’s own, she admires that her pansexual identity is the “least interesting thing about Lauren,” who thrived on seven seasons of boldness, quirkiness, and a nearly unfathomable amount of loyalty. Lauren, whether with Max or Maggie or anyone else, made relationships a very secondary part of her identity, and that casual fluidity is something that Bernard praises Younger’s writers for executing with tact.

“I have two moms, and one of them was telling me that when she came out, her mom went to the library and whispered to the librarian, ‘Do you have any books on lesbian or bisexual?’” Bernard said. “And that’s just not the time that we have come out in, and I think Lauren is very much a character of 2013 to 2021. She embodies this generational shift … she’s a walking Pride Parade.”

Her journey to self-discovery, albeit fictional, is layered in plenty of self-love, bolstered by unconditional parental support — something queer characters often lack on the screen. It is just one of the groundbreaking stories that Bernard was able to step into during her time as Lauren, a relationship mirrored in the character’s championing of her friends as they found success and solace she provided during their often damning missteps.

While the show came to an official (and heartbreaking) end on June 10, it was a run that resulted in vast fulfillment and introspective growth for Bernard over seven seasons, and allowed for the character to step into sound closure and mature expressiveness. “I feel like I had an incredible opportunity to tell the story of a queer woman who unconditionally loves herself, who is unapologetically herself, is loved [and] supported by her community,” Bernard says. “And the fact that she is queer is not tokenized.”

Shot between the fifth and sixth seasons of Younger, Bernard takes on a dramatically different perspective within the queer cinematic space with Milkwater. The focus for Milo, rather than her own sexuality, is how she navigates the implications of queer parenthood from the outside looking in as a surrogate to Roger (Patrick Breen).

At first glance, Milo seems to be in over her head, making split-second and sometimes selfish decisions while struggling to respect well-established boundaries. Those things remain true upon further investigation, but Bernard views her story as something with delicacy. Milo’s shoes were certainly challenging for Bernard to walk in, but the emotional depth of an under-told story packed with fear, hope, excitement, and heartbreak (tied with a baby-sized bow) was enough for her to dive in — and, frankly, the representation matters.

“There are moments where my character, we don’t know if she’s going to do the right thing,” Bernard explains. “She’s starting Roger’s family for him, and her own narcissism and pain sometimes almost get in the way of that. I think for me, that’s the nuance of the film. That’s the journey of the film.”

Bernard says, “I can only imagine how vulnerable it is, not only for queer families, but for families that also have to use a surrogate or adoption, and how you don’t know until the baby’s in your arms. It’s a really delicate, scary time.”

The throughline of vulnerability strikes again, and the film’s igniting moment of sorts — a blood promise that Bernard describes as “strangely uncomfortable, but also intimate and beautiful” — seems to reflect and perhaps foreshadow the fragility of Milo and Roger’s bond. It is a stark turn from the happy-go-lucky, eccentric nature of Younger’s Lauren, putting Bernard’s artistic range at the forefront of critical discussion.

But Bernard explains that the switch between a TV comedy and indie drama isn’t as taxing as it seems on paper; in fact, the versatility is precisely what excites her about acting in the first place, particularly when moving between two distinct LGBTQ+ stories.

“It’s really exciting for me; I love that I got to dig my teeth in and stretch out my muscles,” Bernard says. “That’s the dream. It was impossible, and it was the most exciting time that I’ve had in my life today.”

The scope of Hollywood’s queer representation is certainly expanding, but Bernard believes we are not yet to the point of seeing characters like Lauren Heller (who simply describes herself as “free” in the finale) become the norm on television. Bernard cites Dan Levy’s character, David, on Schitt’s Creek as another television success story, but wants to see more representation that shapes characters by building out the person first, sexuality second.

Really, she wants to see more characters who get meaningful plot lines outside of their sexuality, because identity relies on much more than that outside of the fictional world.

“I think we’re still nascent in that period, on that journey, but I think at least the door’s open,” Bernard explains. “I definitely don’t think we’re there yet. I end up watching a lot of queer TV. I think Lauren has been successful. I think Dan Levy’s character was successful in doing that. People making television or movies have to aim to tell stories about people first, and their sexuality, really, frankly, should be the least interesting thing about them. Until there is more of that, I’m just going to keep demanding that that happens.”

When it comes to spreading that message post-Younger and Milkwater, there isn’t a clear-cut plan of action. Bernard knows that acting will remain at the forefront of her ventures, and literature like Abbi Jacobson’s I Might Regret This and Maggie Nelson’s The Argonauts keeps her inspired and contemplative about queerness.

But Milkwater gave Bernard a unique opportunity to both act and produce. Thus, it is her potential future work behind the camera that might prove to be just as impactful, giving her a chance to aid in bringing more diverse, queer stories to fruition in an offscreen role.

“I think long-term, I would love to both be front-facing, acting always,” Bernard says. “But I would love to produce one day, behind the scenes. Projects that are not my stories to tell, but are mine to amplify.”

Whether on or off camera, Bernard’s next move is certain to be a fluid one — and those who follow her journey should be on the lookout for which ground is set to break.