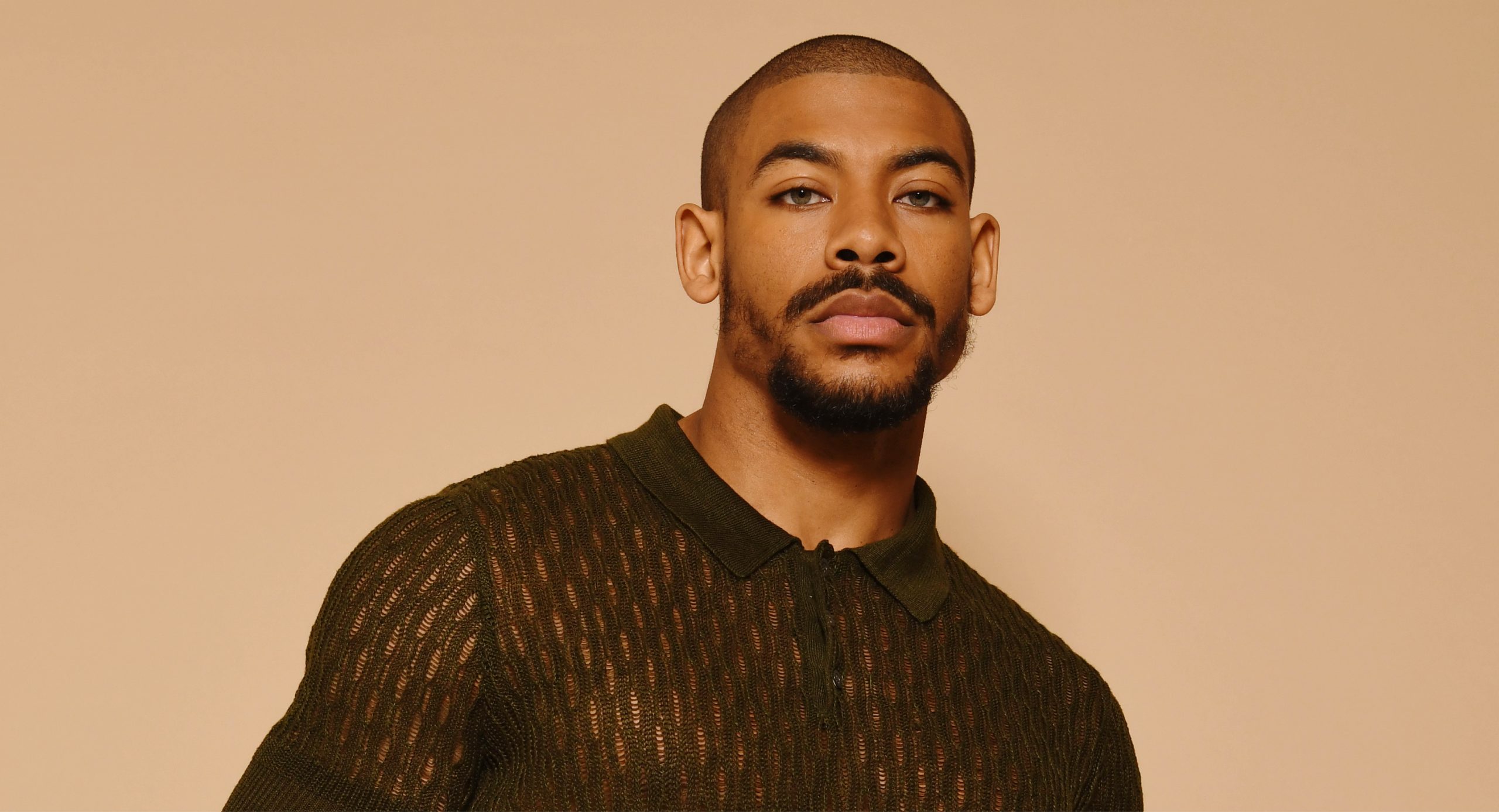 London-based actor Aaron Pierre isn’t afraid of telling the truth. In fact, he stares it right in the face. It’s a mantra to tell history as it was written — and so often left untold — that’s led him to the bright lights and finest institutions about, including Shakespeare’s Globe Theatre, to name but one towering historical structure on his résumé.

The 20-something performer has racked up credits both on stage and now on screen with some serious top-tier talent, including Lenny Henry, André Holland, and Mark Rylance. But, for Pierre, his finest moment came when the handle @BarryJenkins first flashed up on his phone. Enter Academy Award-winning Moonlight director and the genius behind the hit new Amazon Prime Video adaption The Underground Railroad: Mr. Barry Jenkins. 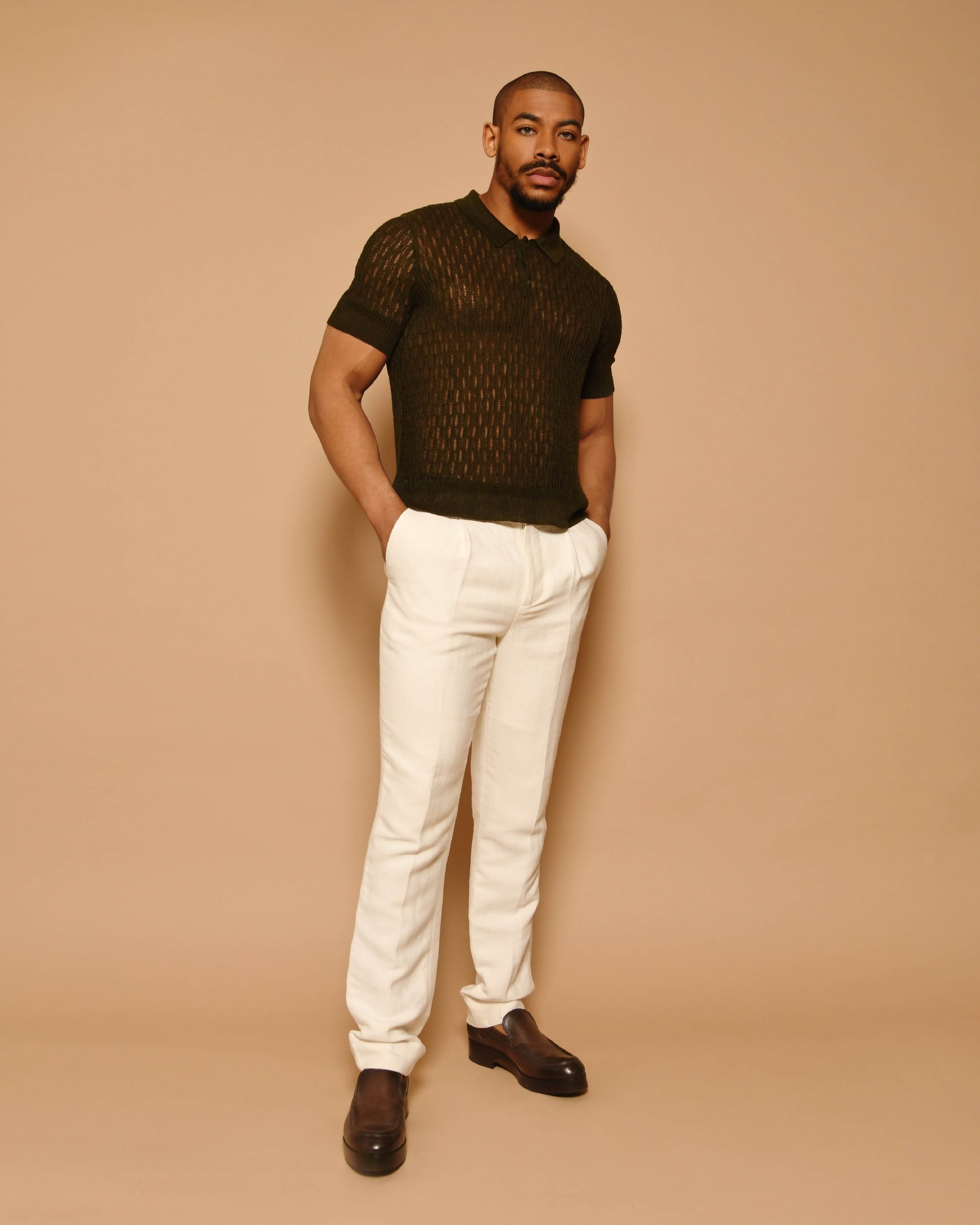 “I received a direct message from Barry on Twitter and he showed his love and appreciation,” Pierre laughs, recalling the now-infamous tale of how he and his soon-to-be boss first connected. “Every single day I pinched myself just to double-check it was real,” he laughs as we connect late one evening. “Barry is open with his knowledge and that is invaluable to those who are, like me, at the beginning of their journey. To be so open and share their experience is gold dust, every time.”

Based on the Pulitzer Prize-winning novel by Colson Whitehead, The Underground Railroad charts the life chronicles of Cora Randall’s desperate bid for freedom in the Antebellum South. Unfiltered in approach and piercing in hate, for many, a project of this honesty could be unthinkable. But for Pierre, it’s truth. And, as always, the truth must show its face.

“This subject matter is incredibly challenging and incredibly difficult,” Pierre begins, making no excuses for the personal challenges he faced in stepping into this world of great pain.

“Racism is never normalized. It’s always challenging and always difficult to read, to see and to hear. I found myself getting through it by reminding myself that this story is important and must be told. I had, and continue to have, hope that this story will contribute towards the conversations that we need to continue to have regarding empathy and understanding and unity. And hopefully it will encourage viewers to reflect and ask themselves what they can do.”

Here, in an exclusive conversation, we join Pierre direct from the home where he first got the call he’d secured a project with Jenkins, to reflect on that very famous moment in his life, working with titans, and why every day is a day to stare truth right in the eyes.

Getting a DM from somebody like Barry Jenkins is not normal practice. How did this end up happening?

Barry travelled to the UK in 2018 to visit The Globe Theatre as a friend, André Holland, was playing Othello. I also happened to be in that show and not long after the show, I received a direct message from Barry on Twitter and he showed his love and appreciation and said “let’s make something happen.” Not long after that, I got the Underground Railroad audition and that became its own process. I remember that on the day I got the job, I’d just moved into my new apartment in London and I’d put up a curtain rail in my living room and my bedroom and all was going well. But the second bedroom was proving challenging but I don’t know why it wasn’t happening … and then I got the call from my team to stop what I was doing and I got the job. Then, everything was put into perspective.

It feels, even now, like this level of madness isn’t lost on you.

It was certainly very surreal and I thought somebody was playing with my heart. I’ve made it clear in conversations that Barry is somebody I truly respect and who makes art I truly appreciate. To have somebody like Barry reach out and say that they appreciate what I do was a real moment that I look back on with fondness.

And his work always feels new. Did you feel this magic on set?

I think the moment I realized the magic was when it’s put together, and to see everything that Barry and everyone else with their genius in one space as one — it was mind-blowing. Every moment I was on set, I knew this was a special project and this undeniable family environment where everyone was close and we all had the same objective which was to tell it authentically — and to honor those who went through these horrific circumstances against their will. 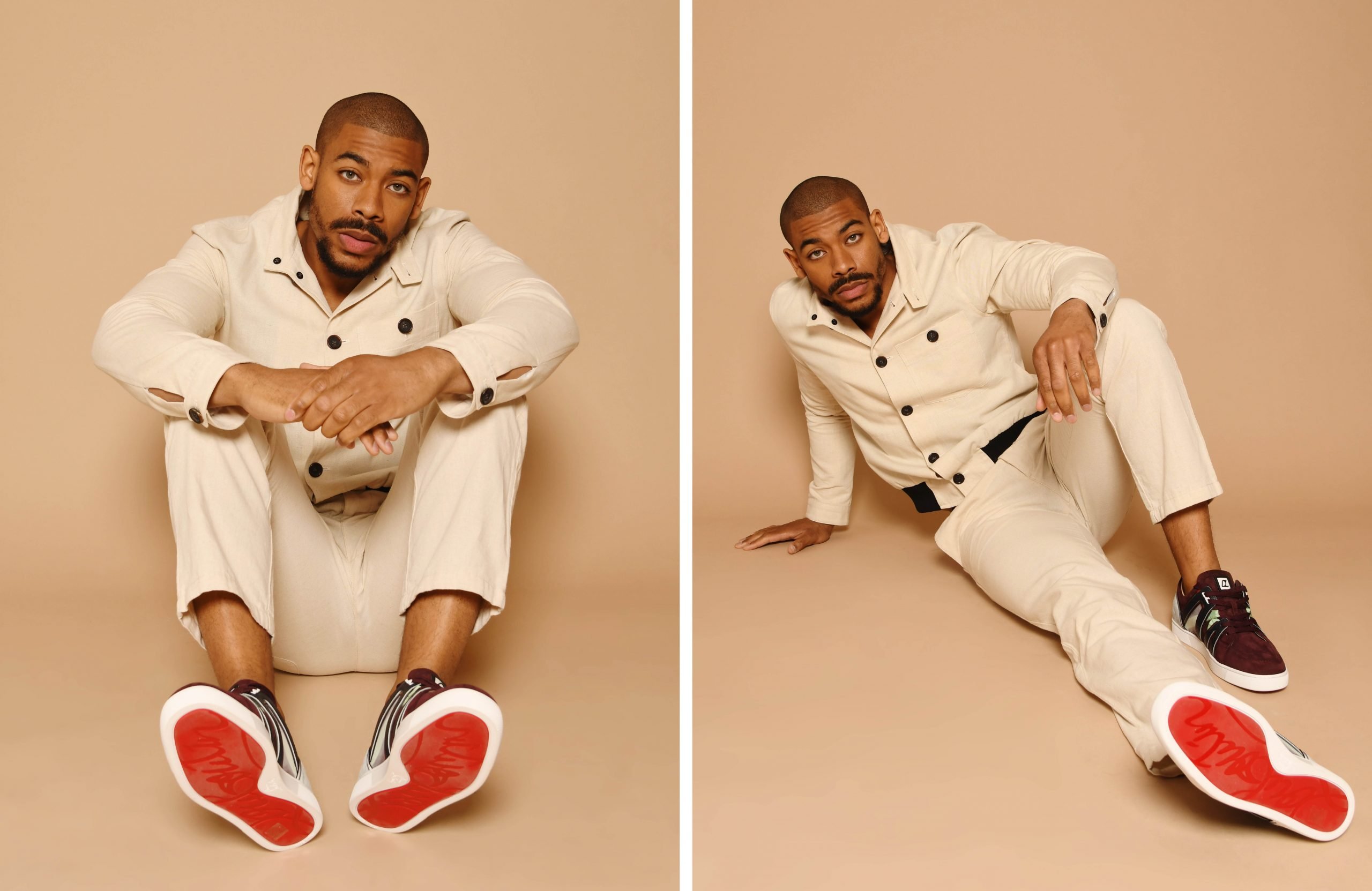 Had you come in contact with the material before this adaptation was going to happen?

I was aware of Colson Whitehead and all these incredible things he’s done, but I became far more familiar when I became part of the project. And it has been a gift to be working on something that had these two incredible genius people putting their genius into one space. You’ve got Colson Whitehead and you’ve got Barry Jenkins coming together and when that happens, the writing that you end up having the opportunity to work with is rich to the highest degree. It’s a real gift.

It is. The text was so rich and incredibly well-written. Amazing!

Have you watched any of the series at home since release?

I have and I was absolutely blown away. Everybody involved just moved me and completely blew me away and everybody is phenomenal.

Tell me a little about the safeguarding you put in place to protect your own mind from the material.

It’s so crucial that when I approached this show, I was safeguarding my mental wellbeing as much as possible — alongside my emotional and spiritual wellbeing because this subject matter is incredibly challenging and incredibly difficult. Safeguarding myself was helped and assisted greatly by Barry’s approach to managing the whole thing. We had a guidance counsellor every day. Things like that are invaluable because having somebody present to assist you out of a dark space. 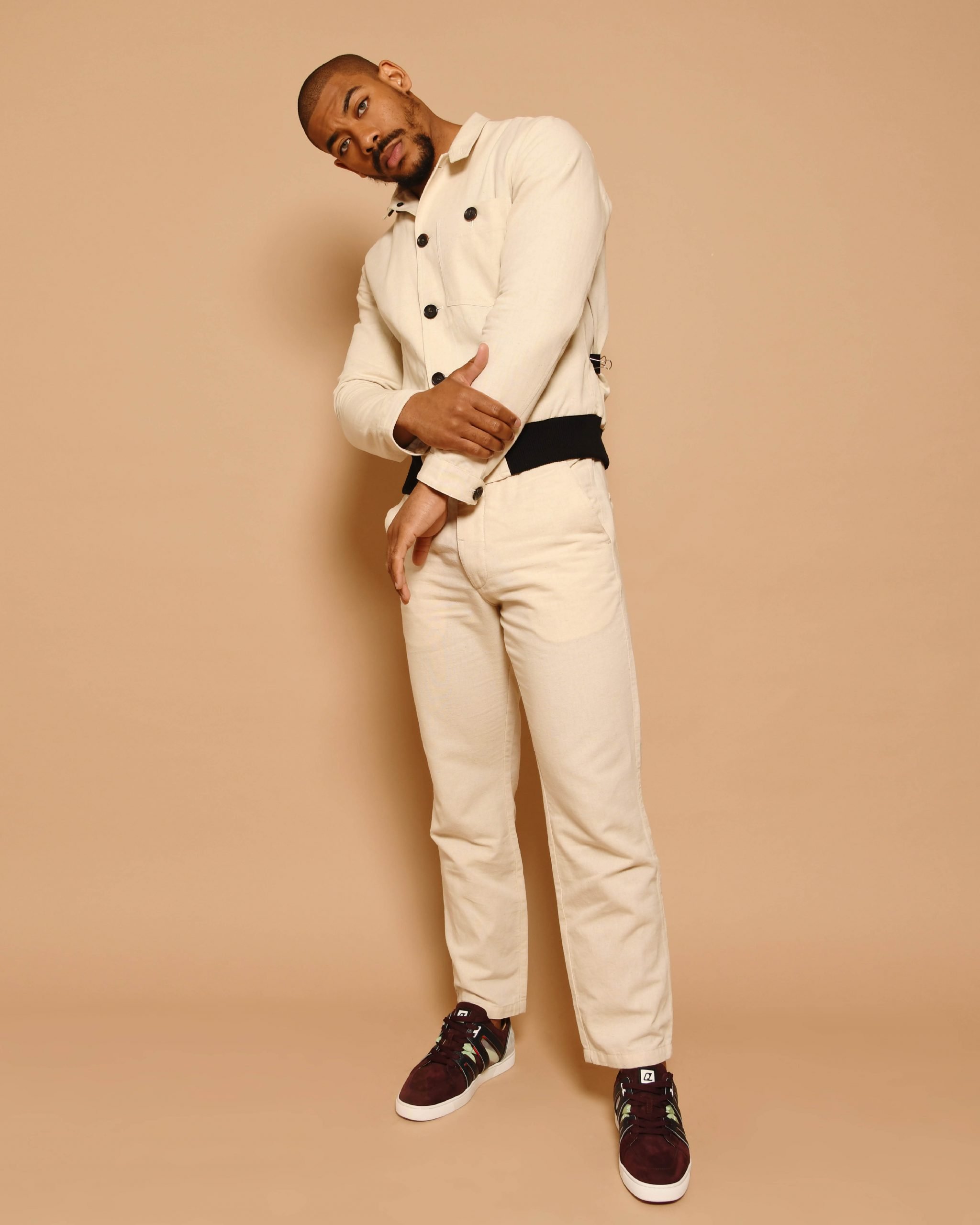 Were you fearful the violent racism used here could become normalized by how often it’s said and experienced in the material?

Depending on who you ask from the team, you’ll get a different answer. So I can only speak to my experience and that is that, for me personally, that (racism) is never normalized. It’s always challenging and always difficult to read, to see and to hear. I found myself getting through it by reminding myself that this story is important and must be told. I had, and continue to have, hope that this story will contribute towards the conversations that we need to continue to have regarding empathy and understanding and unity. And hopefully it will encourage viewers to reflect and ask themselves what they can do.

And thus not putting a lens on a tale that will make it historically inaccurate.

Right. These stories are, again from my perspective, important and they must be told.

Thinking about your audience, who do you hope watches the series?

My hope is everyone, irrespective of race, heritage. I hope everybody can take the time to watch this story and hope it broadens their knowledge and understanding. And it encourages them to do their own research.

Does the industry have these difficult conversations enough on mainstream platforms?

I think there’s certainly conversations being had, but I do feel that until these situations are resolved, we must not slow down in having them or pull back on the volume. Until there is not the problem, it must be spoken about.

Is the idea of 10, one-hour episodes a daunting task?

I was certainly nervous! That nervousness came from the magnitude of the project and the importance of it. I try to channel those into doing my best throughout. That sort of transition of theater to screen I think, for me, the only difference between the two mediums is that you have an auditorium and an audience that you must entirely engage from the person in the front row to the person right at the back in the corner. But when you’re doing screen, the audience are all right where the camera is and there’s times where the camera can be so close to your face so it’s adjusting the dials accordingly — but what remains the same is trying to tell the story in an honest way.

Do you think because you’ve worked in both mediums that it has allowed you to become a better actor?

I certainly think that has contributed to my growth as an actor and I hope that I can continue in my career to be part of all mediums because I do think they each teach you valuable things as a creative.

When you get to work with somebody like Lenny Henry, do you instantly become a sponge? Are you there to soak up everything possible from somebody of his status?

Does the same apply when you work at iconic and historical institutions like Shakespeare’s Globe in London? 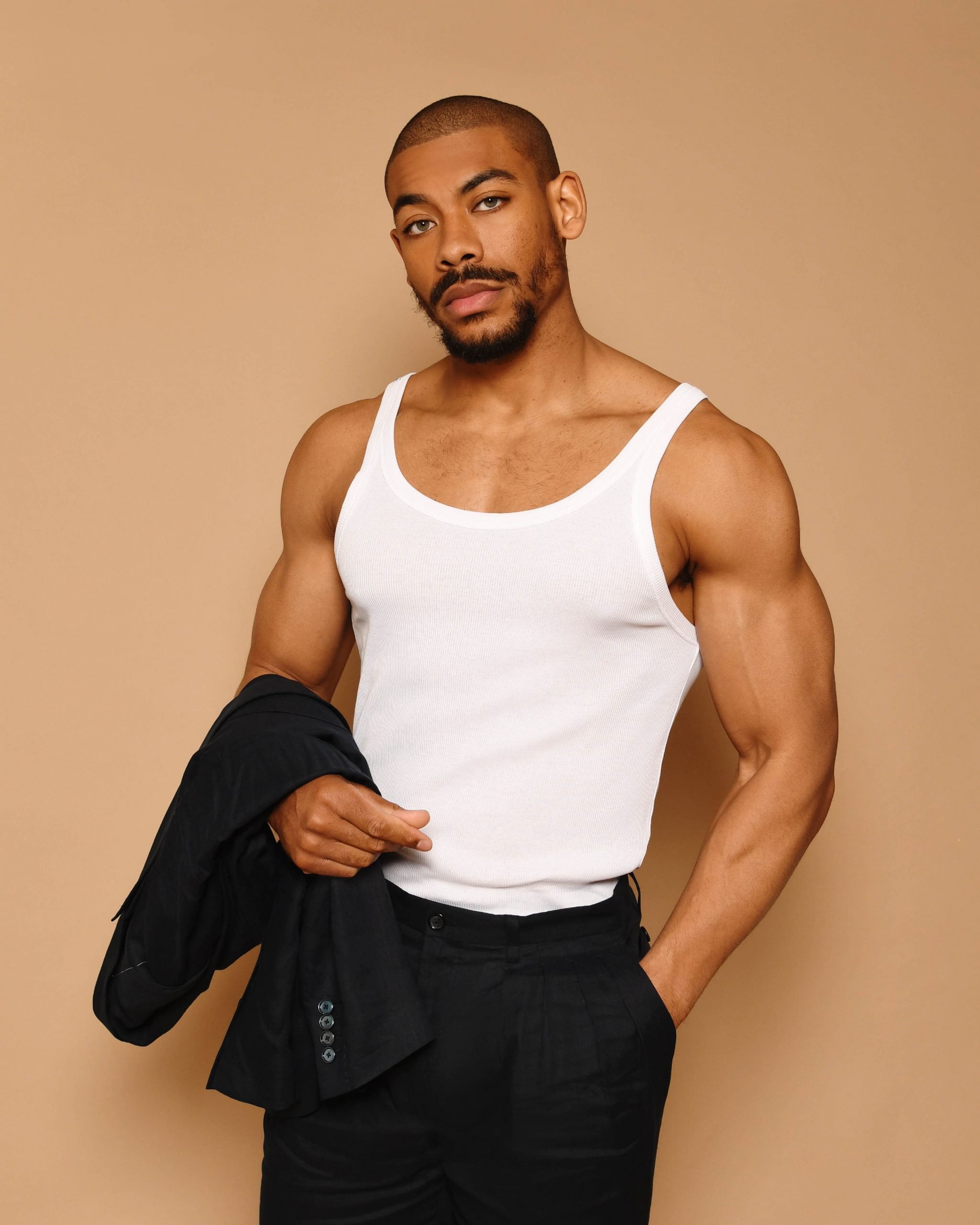 What do you remember most about that experience?

I remember the first day I stepped on the stage in rehearsals. When you’re in the audition process, you give it your everything and all you have. You then land the job and it brings this incredible moment of euphoria … but then it dawns on you that you then actually have to do it. The moment it dawned on me, I stepped onto the stage and I felt tiny in this huge space that houses 1,500 people. Now I needed to do it and fortunately I had an incredible cast and director who made me feel held during this process — which was a large part of me feeling ready to tell that story on that stage. I have an enormous amount of respect for all these people. It was a real job to collaborate to work and learn from them, and grow!

Where is the next chapter for you? What’s next on the wish list?

Viola Davis said about Fences on Broadway that once you’ve done one August Wilson piece, you can do pretty much anything.

It does feel like that, it certainly does. We were doing this play, King Hedley II is about three hours, possibly more, and the set does not change once. That’s a real, real challenge. There’s one interval. It’s certainly a beautiful experience.

And finally, how are you with your talent and status moving you into the celebrity world — particularly now you’re moving into the world of television and streaming?