At this point in time, it is pretty safe to say most people are familiar with the ’80s synth pop mega hit “Take On Me” by a-ha. Whether you’ve voluntarily listened to it or not, it is an unavoidable earworm that stays in your head for ages after you hear it. However, not many people are familiar with the fact that the song had a pretty rough start the first (and second time) it was released; it wasn’t until the, even more iconic, music video, full of interactive black-and-white cartoon animations, came out that the song actually started hitting the charts. The video was so different from anything that was being presented to the pop audience at the time, people had chills when they first saw it. That feeling of disbelief and amusement is understandably pretty damn hard to provoke but somehow, the Irish Argentinian singer/songwriter Luz has managed to do so in the video for her latest single “counting houses.”

With the help of LA-based filmmaker Ted Newsome, the 20-year-old presents us with an extraordinary piece of visual media that perfectly complements the beautifully written track. Shot in analogue stop motion, the same technique used for films like The Nightmare Before Christmas and ParaNorman, the diverse cluster of frames that perfectly accompany the imagery presented in the song is delicately laid out on a scrap book just before the audiences eyes.

Every single piece of material, photo, and frame have been carefully measured, cut, painted, placed, and even moved around by Newsome’s very own hands while he simultaneously photographed each small change to impeccably match the lyrics of the song. The lengthy process is flawless from beginning to end, and even the small mistakes that could have happened during the process seamlessly fit within the narrative of the track and ultimately mirror the feelings transmitted by emotional tune. 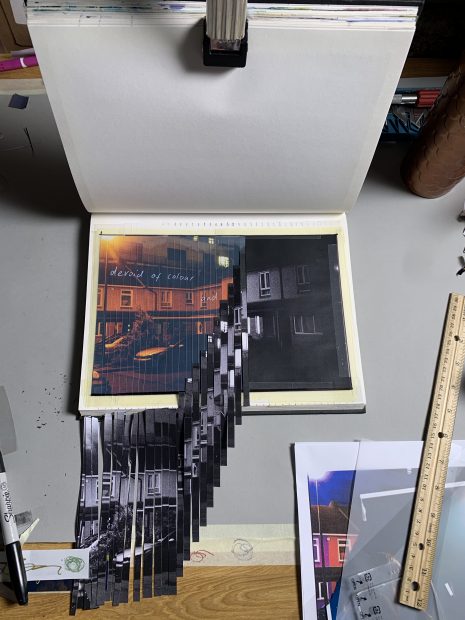 The video captures people’s attention in a manner that is hard to put into words. From the photos selected for the cover of the scrapbook to the small numbers drawn on pencil as Luz sings “counting houses on the street where we lay” and the word “leaves” actually falling down overlaid onto a photo of trees by a canal to mirror the description of the fall (season). You just want to keep on watching on repeat because very small things like unfolding photos and innocent pride rainbows might slip. The more times you watch it, the more surprises you seem to notice.

As Luz explained in a press release, “It’s a song about positivity and hope of what’s to come. It’s about reassurance that you can make the choices that are best for you without the influence of others and that there are people out there that will make you feel most like yourself” and the video certainly transmits this energy. In a very calm and hopeful way, the video drives you to think everything will be OK if you take the steps to put yourself first and live your true life without fearing other people’s opinions.

“counting houses” is out now via Platoon.