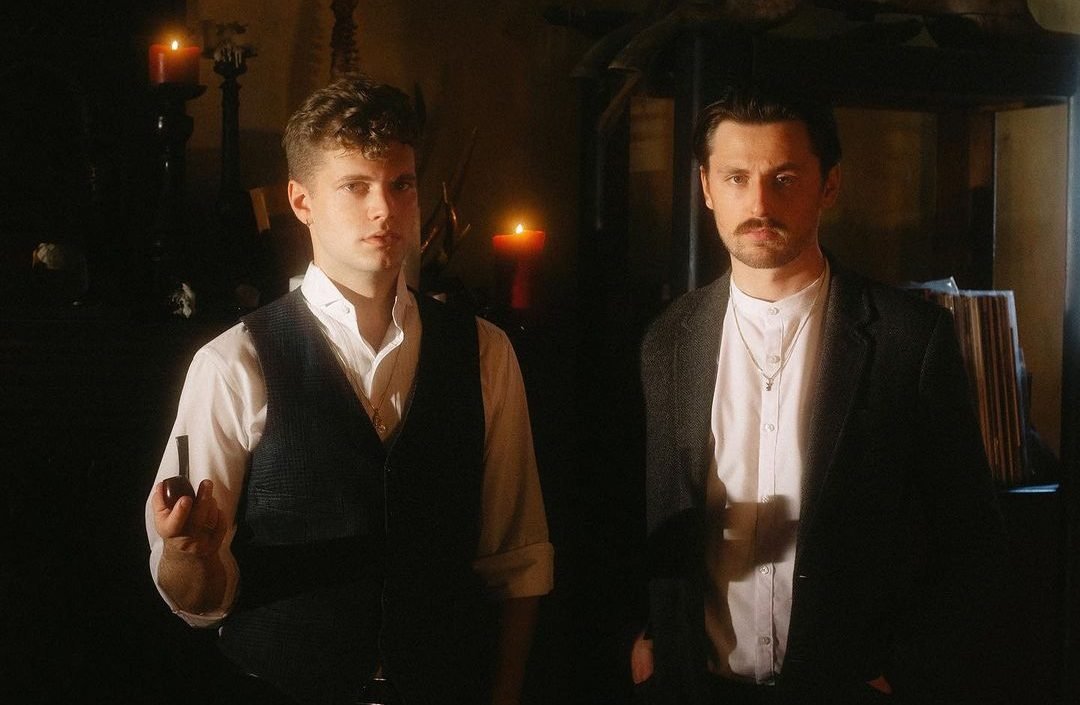 Music and cinema have worked together in perfect harmony for decades. Film scores and soundtracks are the essential underpinnings of every great movie, but what if someone decided to flip that relationship on its head and create a band that embodied the marvel of the theater? Enter, World’s First Cinema. In preparation for the release of their gripping and dark new single “Make Me a Monster,” the duo sat down with EUPHORIA. and invited us into their cinematic universe.

Fil Thorpe and John Sinclair have both enjoyed previous music industry success, but it was a chance meeting that brought them together as a theatrical alt-pop duo. “Fil and I met at a board game party, and we just ended up talking and decided we should make some music,” Sinclair says. “He had an idea for a sync project that was very limited to pitching for film and television. Then, we sat down in our first studio session together, and it was just like lightning in a bottle. We wrote two songs right off the bat, and they got me instantaneously.”

However, it was only after the pair had written their first tracks that the concept of World’s First Cinema was born. “It wasn’t until we started making music together that we realized the songs worked on a different level,” Thorpe elaborates. “They worked as songs rather than just pieces of music to be played in the background of a film scene or a movie trailer. So, I think it was more of a B to A than an A to B situation.”

Following that revelation, World’s First Cinema got immediately to work, releasing their debut EP Rituals in February 2021. Although the duo admitted, it’s their most recent offerings that will give listeners a true understanding of the band’s sound. “Rituals has a different sonic tone because those songs were written before we had the intention of turning this into a band project,” they share. “As we get further into our releases with ‘Make Me a Monster’ and the songs to follow, it will all fall into place. The music videos and visuals coming out will really help people understand the recurring characters and themes.”

And, they’re right, the band’s recent single “The Woods” and latest single “Make Me a Monster” are the epitome of the dark fantasy sound that World’s First Cinema have developed. With orchestral strings and a bewitching arpeggiated melody, “Make Me a Monster” is an imposing introduction to World’s First Cinema’s fantasy universe. When asked what inspired the track, the pair provide a very simple answer: “Frankenstein’s monster.”

They continue, “We were working on some production for another artist, and John had a couple of song ideas. He sent over the beginnings of what would become ‘Make Me a Monster,’ and as soon as I heard it, I thought, ‘Yo, this is dark, and it’s gonna be hard.’ One of the first things I heard in it was the arpeggiated synth pluck that goes through the verses, and I had this picture in my head of a mad scientist in a dungeon laboratory messing with this Frankenstein’s monster type creature. So, that’s why I put all the drill sounds into the drums, and then it skyrocketed from there.”

With the foundations of the World’s First Cinema universe beginning to emerge and a clear storyline in their minds, Thorpe and Sinclair extended the Frankenstein theme to the forthcoming single’s music video, which will be released on May 19. Set in the 900-year-old Hedingham Castle, the “Make Me a Monster” music video is nothing short of otherworldly, and as Sinclair says, it was his violin solo that sealed the supernatural deal.

“Having me in the video was a funny decision that sealed the whole Frankenstein theme,” he says. “When I put that violin solo in the back end, I had this idea, and I just called Phil and said, ‘I have to rise from the dead and play the violin in this video, otherwise, the whole thing’s not worth it.’”

As you would expect from a band with the word “cinema” in their name, the visual exploration of the World’s First Cinema universe is equally as important as its sonic output. Thorpe elaborates on their all-encompassing approach, saying, “I believe that if you’re going to do a concept record or a concept project, it has to be absolutely everything. The only way to get a consumer absorbed into a universe that you’re building is to make it all-encompassing. So, you need to feel it in the music, hear it in the lyrics and see it in the visuals. Everything from what you’re wearing to the way the logo and artwork look, to the way an instrumental feels is so important.”

With all the enchantment of cinema and the emotional depth of music, World’s First Cinema are embarking on a unique journey that they are excited to share with the world. Although when it comes to sharing the creative process, they’re not entirely convinced. “We’re definitely a bit creatively protective of this little universe that we’re building,” Thorpe says. “It’s not that we don’t want to work with anyone but try to find me a writer who’s writing Frankenstein-driven dark fantasy pop songs, and then we’ll take a session with them.”

However, there is someone who springs to mind: “Actually, if Ozzy Osbourne wants to come jump on something, give us a call,” Thorpe says, only half-joking.

In 2021, many artists are approaching music on a quick hit-making basis that seeks to please the masses, but that’s a far cry from the immersive and whole-hearted process World’s First Cinema have taken. This duo is putting all of their energy into creating music and a concept that they love, and they don’t mind if you don’t get it because they do. “There’s this weird misconception out there that everybody has to get it. People see songs as either a hit or not a hit, but we just don’t see it that way,” Thorpe explains.

Sinclair agrees, saying, “This isn’t a pop pleaser project that’s supposed to be accessible to as many ears as possible, it’s just Fil and I having a blast making music. So, if you don’t like it, then alright.” With this outlook, it’s clear World’s First Cinema are dedicated to making magic in their fantasy realm that not only fits their mystic storyline but also retains the human spirit.

“I think something that’s really important when it comes to concept projects, is keeping that underlying metaphor that, if you strip it to its bones, is a human story,” they share. “These tracks are always about something real, something that happened to somebody or something we’ve been through. So, I think when you can experience both sides, that’s when you see the real magic.”

Trying to define or pigeonhole World’s First Cinema as one thing or another would be a futile task, but one thing is for sure, this duo wants to give listeners an enveloping experience. “We want our music and everything that goes with it to achieve that same feeling you get when you’re watching a TV show like Game of Thrones or American Horror Story,” they say. “We want it to be a universe that you understand: you’re in it, and you can feel it, it’s tangible.” World’s First Cinema isn’t here to build the typical musical experience; this project aims to create a world that listeners can crawl into and experience with every sense.